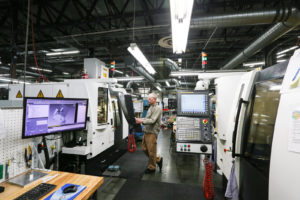 Gregg Meyer is the milling department supervisor. MacKay Manufacturing purchased their first seat of Vericut in 2010 in conjunction with a new advanced multi axis milling center. Today they have four seats and every job on every machine gets run through Vericut’s simulation before the program is loaded on to a machine.

MacKay Manufacturing started back in the late 40’s under different owners and a different name. They were a small mom and pop shop servicing the local industries in North Eastern Washington State. Mike MacKay worked for five years as the salesman before buying it in 1986. Today, MacKay Manufacturing have 50,000 sq. ft of high tech multi axis manufacturing capabilities just down the road from their humble beginnings.

Katie MacKay has been part of the team at MacKay Manufacturing since she was 7 years old and her dad purchased the company. Duties then were limited to filling the employee vending machines and stocking the soda machine. Katie officially joined the company full time in 1996 and worked her way through the ranks. As vice president she and general manager Bruce Something run the company. She, like her father before her is not a machinist. Instead she hires people with the skills needed to operate the 65+ CNC machine tools at her disposal. “I got hired after high school to work in the office,” tells Katie. “After that I was the delivery driver for a few years. I really enjoyed the delivery aspect because I was out representing the company. It gave me a chance to see the parts and meet the customers.” She transitioned over to a supervisory role in shipping before turning her attentions to their extensive finishing department. “Our finishing department includes all the hand work, lasers and assembly,” details Katie. “I headed up that department for 9 years before becoming vice president. Dad is fairly retired and I’ve been VP for four years now. My dad wasn’t a machinist; he was just a good salesman who supported his customers. We still don’t have a sales person, but myself, Bruce Szember and my cousin Chadd MacKay who is our NPI manager (new product introduction) handle sales, customer support and maintain the culture of the company. The people are now, and always have been the best part of this job.”

MacKay’s turing departments are extensive. The shop is loaded with DMG Mori Seiki multi-axis lathes as well as Tsugami and a Tornos Swiss turning centers.

MacKay Manufacturing is an AS9100, ISO13485, and ISO9001 registered company primarily serving the medical industry. More than 60% of their work falls under medical with it split between implantables and devices. “Medical is a large part of our business,” details Katie. “We also support aerospace, defense, and semi conductor. Most of our customers are large publicly traded companies. We don’t manufacture any of our own products and really are still a job shop.” With the amount of technology at MacKay Manufacturing it is difficult to think of them as a job shop, but the reality is the lathe department alone performs more than 300 setups a month. “We don’t make 10,000 of anything,” continues Katie. Most of our runs are around 50 parts.” MacKay Manufacturing is Spokane’s one stop job shop with milling, turning, mill-turn, EDM, Swiss turning, heat-treating, citric passivation, laser engraving, 4 axis laser welding, assembly, and even a class 10,000 clean room. “All our horizontal milling centers are Makino,” explains Katie. “Our verticals are Mori Seiki as well as most of the multi axis lathes. The Swiss department has ten Tsugami machines and one Tornos, while EDM is loaded with Mitsubishi sinkers and Makino wire machines.” 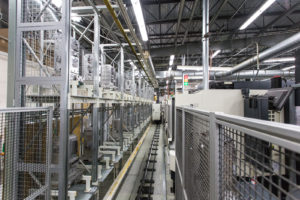 MacKay Manufacturing has an extensive milling department. Their baseline horizontal mills are all Makino A55 or A51. They have ten of them including two cells consisting of three machines and 40 pallets in each cell. There are slight variances in the machines from year to year so each machine is loaded into Vericut. The program is only verified on the exact machine it will run on.

Milling department supervisor Gregg Meyer has been with MacKay Manufacturing almost since the beginning. “I started work here at MacKay right after the MacKay family bought it,” details Gregg. “I was going to school for fire science and needed a job. My dad knew Mike and got me on sweeping floors and doing basic maintenance. I worked my way into production, ran all the machines and moved into a leadership role as milling supervisor in 2005.” Gregg manages 34 people 24/7 and was instrumental in adding Vericut simulation software into the workflow. “The milling department doesn’t cut metal without first running the program through Vericut,” explains Gregg. “Vericut simulation is standard practice on all our mills throughout the department.”

Vericut was implemented back in 2010 when MacKay Manufacturing purchased an advanced manufacturing multi axis machine tool. They knew even the smallest collision was going to cost them time and money. “An alignment alone was 5k and I had to fly a person out from the east coast to do it,” tells Gregg. “It wasn’t worth the risk, so Vericut was integrated on that new machine. The results were fantastic and we added more and more machines to the program. Now it is 100% part of the culture, and a process that we never go without.” The slightest change in programming on the floor requires the operator to send it back through Vericut for verification before loading it back into the machine. “Even the best programmers make mistakes and Vericut virtually guarantees that the mistake never makes it to production,” continues Gregg. “Vericut gives the guys on the floor the confidence to press the start button without the worry of scrapping parts and crashing machines. The rule is simple. If there is a program change you post it, you run it through Vericut, then you reload it. It is an extra step, but it works, we see it work all the time.”

As an ISO1345, ISO900 and AS9100 registered company quality is a top priority at MacKay Manufacturing. Most of MacKay’s parts are smaller than a basketball but require high precision for the industries their serve. One military part (not pictured) as an example had more than 1200 features for inspection, took 400 hours to program, had seven setups and took ten ours of spindle time. They machine Ti, stainless, aluminum and some more exotic materials. The manufacture a lot of complete assemblies like the spinal spreader pictured on the top right.

In retrospect, both Katie and Gregg agreed that they wish they had added Vericut sooner than they did. “Initially it took some getting used to,” tells Katie. “We have machinists who have been doing it one way forever. Engraining in them the importance of verification was a process in itself. Building it into our culture was beneficial, but didn’t come overnight.” Speaking to some of the operators on the dayshift they were delighted to have another line of defense against programming problems, but admitted it took a little while before it became second nature. No one even thinks about it now, it is just something they do on every job, on every program, every day. “We own 4 seats of Vericut in the milling department,” touts Gregg. “This ensures no waiting to use it and it takes away the thought of just skipping it and reloading onto a machine.” The milling department consists of 17 machining centers and each one is built and entered into Vericut as its own machine tool. “Vericut isn’t generic simulation, but exact models of our machining centers right down to the nuts and bolts,” explains Gregg. “As an example we have 11 Makino A51 or A55 machines. They are our basic milling platform, but within those machines are five different spindle types. Depending on the age of the machine the spindle cartridge is different, or they might have a different taper. All that is input into Vericut. If it clears the spindle on one machine that doesn’t guarantee it works on a different machine that is the same model. When we run the simulation we run it for Makino #1 and that program is only proofed out for Makino #1.” MacKay Manufacturing are taking it one step further and are in the process of building their entire tool database though WinTool. “WinTool allows us to be even more precise in our programming and Vericut simulations,” details Gregg. “It drops the tools right into MasterCam and Vericut. We will be able to do a more precise optimization of tool paths with each exact tool as part of our simulation.” 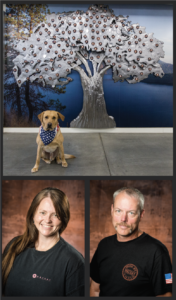 Above Left – VP Katie MacKay
Above Right – Milling department supervisor Gregg Meyer
Left – MacKay Manufacturing is 100% a family owned and run business. Management knows all 151 employees by name and each one has their own professional head shots. Cooper the shop dog sits in front of the employee lounge area where every employee is part of the MacKay Manufacturing family tree.

2018 is on track to be another solid year for MacKay Manufacturing. With that continued growth means more employees are needed to facilitate the expansion. “Over the 32 years in business and we’ve grown an average 5% every year,” tells Katie. “Some years less and some more, but 5% average over three decades is something we are proud of.” Like most shops finding the right people is a challenge to say the least. MacKay Manufacturing looks for people who share the same traits and habits that are visible throughout the company. “Attention to detail, problem solving skills, motivation, and mechanical aptitude, are all things we look for,” tells Gregg. “To succeed here you have to think outside the box sometimes to find the solution.”

MacKay Manufacturing works hard to maintain their reputation in the industry and in the community. The family atmosphere and how they treat their employees is well known in the area. With 151 employees on staff, Katie knows each and everyone by name, and there is value in that. Consequently MacKay Manufacturing receives many applicants,  they take the hiring process very seriously to ensure its a good fit.  It has to be a good fit for culture and skill set,  but typically, employees receive extensive training opportunities on the job to learn how to tackle the tough stuff.” “Machinists interview all the time that have never seen some of the machines we have,” continues Gregg. “30 years ago a lathe was a lathe and a mill was a mill. Now we have 11 axis lathes with live tooling and 7 axis mill-turn centers. It’s a lot to process sometimes.”

Manufacturing is plentiful in this part of the state, and MacKay Manufacturing stands out amongst Eastern Washington’s abundance of machine shops. “The majority of our employees stick around for the long haul,  we have a unique culture and environment for the manufacturing trade.  It is a demanding, fast paced, clean, respectful, educational environment that is constantly growing and changing,  if that culture fits with our employees we stay together for careers,” concludes Katie. “That’s how my dad built the business and how we continue to run it. It isn’t just a name on the building, it is my name, it’s his name, and that name stands for quality, integrity and purpose.”