URBAN WORKSHOP – A Makerspace That STEMS From Racing 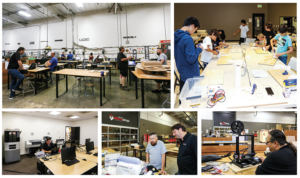 Urban Workshop is a 28,000sq.ft. do it yourself member-based workshop and small business incubator. They have adult memberships, adult classes, onsite storage, and a very successful youth program. Urban Workshop is full scale makerspace, offering a little bit of everything to its members.

Costa Mesa, Ca. based Urban Workshop is full scale makerspace, offering a little bit of everything to its members. Regarded as one of the top makerspaces in the country, they just celebrated their fifth anniversary in July. Owner, Steve Trindade is pleased in how far they’ve come in that short time.

Steve never set out to own a makerspace, but rather fell into it. He spent 14 years owning an engineering and manufacturing company whose niche was early stage prototypes for automotive OEMs with design engineering intent. They worked with domestic and European automotive partners as one of the premier EV and hybrid vehicle engineering houses in the country. Pre recession the business was 95% engineering and 5% motorsports. That flipped when the recession hit the auto industry harder than it hit rich guys who race cars. “I contracted out as an engineer for racecars,” tells Steve. “I love racing and the challenges that come with engineering a car in that environment. After the recession, motorsports became a key element in my business model. Long story short is I ended up owning TruSpeed Autosport. We became a race team and parts distributor that had an engineering company.” 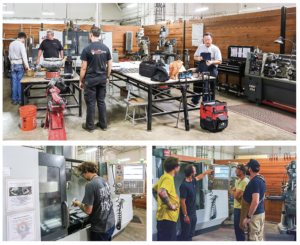 CNC classes are some of the most sought after on the calendar. With low student to staff ratios it is a very personal learning environment.

Through his racing travels Steve had taken an interest in the idea of makerspaces. He would grab the rental car and visit makerspaces while traveling around the country to races. “I had this interest in the concept of makerspaces,” explains Steve. “I was doing recon on them, but it was not anything that I planned to open.” Because of Steve’s racing and automotive contacts, he often had speaking engagements. Most of them were to local students as part of the STEM educational model. He was backstage at UCI talking to faculty members about makers spaces when as a joke he was introduced on stage as “this is Steve Trindade the guy who is going to open “The Shop”. “Ha ha, I smiled and went about my business presenting to a few hundred students,” tells Steve. “I laughed it off, but the next week I had people showing up at my engineering company asking if “The Shop” was open. I’d tell them no, it doesn’t exist’ Over the course of a year I had 3-5 people a week come by looking for this mythical shop. That got my attention, but not enough to pull the trigger on anything. Then January 2014 I get the news I’m getting screwed out of a lot of money in an automotive bankruptcy case. I’m literally sitting there with my head in my hands when five minutes later there is a knock on the door….. “Hey man is this The Shop?” “Yes, it is, it is called Urban Workshop, welcome.”

Steve took the next couple months to wind down his engineering projects and began a search for a space. He struggled to find a place, but fell into a deal with his current landlord to take over a vacant building he was having trouble selling. It was perfect except for the fact the previous tenant left it in shambles. “It was mostly just me and Kirk,” explains Steve. “But people kept coming looking for the shop. So instead of no it was yes this is Urban Workshop and we are trying to open would you like to help us.” So, two engineers and random volunteers reconditioned the building. Urban Workshop officially opened July 15th, 2014 with the short-term goal of in 2 years turning a profit, expanding to 20-25,000 sq.ft. and opening multiple locations. Steve populated the space with machines he already owned, and new ones that he bought. It was all working with the machines and a nicely renovated building. Then another hiccup happened as the owner sold it six months later, hanging Urban Workshop out to dry. “We were sunk with no place to go,” admits Steve. “My last ditch hope was to call up the guy I bought the race team from and see if he wanted to bounce from his building and I would move in it. That is the building we have now. It was few years before we planned, but I then had 28,000sq.ft. of makers space. On month 24 we were $5 ahead for the first time and had created an amazing place. Now five years in our programs keep growing and more and more people are experiencing what it is like here at Urban Workshop.”

Urban Workshop is best described as a do it yourself member-based workshop and small business incubator. They have multiple steams of income to help minimize the overall risk. They have adult memberships, adult classes, onsite storage, and a very successful youth program. Urban Workshop has 1,700 members on the books, and on any given month 325 are actively paying monthly dues. “Half of our active membership is comprised of small businesses running 100% out of this facility,” tells Steve. “They do roughly 20 million in revenue a year. URB-E is a perfect example of a company that built their portable scooter prototypes and business model right here before gaining enough investors to go into full manufacturing. We don’t get any kind of cut. Members are just members regardless of if they are making millions or taking a blacksmithing class.”

Paid membership gains access to everything on offer in the building. It is like an industrial arts gym membership with access to come and go as you please. Membership ranges in pricing from $150 a month if bought in a year’s block to $199 on a month to month basis. On top of that members get discounts around town at local vendors who partner with Urban Workshop on materials. Suppliers like Haas, Solidworks and Autodesk also offer member discounts. “Not only did we get a great deal on our Haas mill,” details Steve. “Members also get a discount if they open their own place and want to buy a Haas. People buy what they know and the industry as a whole has been very supportive.”

Hands down the most popular machines are the three Epilog laser cutter and engravers. During peak times they are booked up a week in advance. Members use them for a variety of applications including metals, plastics, glass etching, and even bamboo straw customization.

Urban Workshop maintains a professional level of equipment all on site. The shop isn’t filled with hand me down boat anchors, but with nice, new, current evolutions of tooling that people want to use. They have a Haas TM2P CNC mill, Bridgeport mills, lathes, welding, sheet metal, an amazing woodshop with a CNC router, three Epilog laser engravers, electronics, plastics, vacuum forming, auto shop, and 3D printing just to name a few tools. The laser cutter/engravers are the most popular of all the machines and members use them in a variety of ways. Anything from metal etching to engraving names on bamboo straws. The possibilities seem endless.

Classes are all over the board, ranging from automotive to woodworking. Every department has support classes taught by experts in that field. They also offer project specific classes for adults and kids. Their CNC related courses are some of the most popular with members. They have 9 classes just in the CNC Training category alone. There are 6 more milling and turning specific classes as well. They offer 13 CAD programming classes with dozens of others in laser cutting and etching, 3D printing, even injection molding tool design. A large part of students enrolled in the CNC programs are engineers or engineering students who want to better understand the manufacturing processes and better communicate to the shop people at their day jobs. It is also comprised up of people who are starting a business and need to use the CNC. Engineers tend to design products and at Urban Workshop they can do so without a huge capital investment.

Everyone is in a hurry these days and the thought of enrolling at the local junior college is daunting. Makerspaces fill a niche and make training fast and affordable. The best part is you don’t even need to be a member to take the classes. Take for example the CNC Training program. Students begin on the Bridgeport, turning knobs and learning the sound and the feel. They progress to the CNC router, giving them a taste of programming. The router has a vacuum table, eliminating the complexities of work holding and removing it from the equation. Students can concentrate on the CNC aspects like 3D coordinates, setting tool heights, origin systems, speeds and feeds. Then they get set loose on the Haas where curriculum brings in work holding strategies and programming efficiency. “Our Haas is a TM2P 3 axis with ten tools,” tells Steve. “We intentionally kept it simple since learning to use the machine, prototyping and low volume production are what it is used for. We have a reservation management system to allow students to book time on all the machines. Classes run once a week for three hours each. Kirk taught himself how to run the Haas and proved out all the classes himself. We adjust course as needed. We are on the verge of expanding the wood shop and the metal shop areas. I want to add another CNC router, a CNC plasma cutter and really want to add a CNC lathe.”

Matt Durham and Steve built the youth program from scratch, and it is something they are very proud of. Urban Workshop’s youth program is open to students 10-16 years old. It is a project based learning platform that starts with using tools. “In the most basic class students take apart a BMX bike,” explains Steve. “The younger kids should be able to get the wheels back on, but the older ones are held to a higher standard. I better be able to ride it around the shop when they are done. Kids come to us not knowing there are different kinds of screw drivers and they leave having made a Bluetooth speaker or used a welder. The youth program was something I didn’t want to do. There was no way I was going to run a daycare with machinery. Then this woman Donna convinced me I should give it a try and I’m so glad she did. It is a 12 -week semester and the kids come once a week for three hours. These kids are tomorrow’s engineers, the machinists, the teachers, the welders. Just exposing them to an environment like this builds a lifetime of skills and opens a world of possibilities. My first drafting class is what made me become an engineer, who knows what might inspire them.”

In just five short years Steve has seen his fair share of creative people building their dreams, building products, and building business. He has also witnessed some crazy stuff. A group of Burning Man enthusiasts built a laser they claim can put a visible dot on the moon. He’s seen cos-play chainmail for a cats, and one member even built a coffin for his dying dad. “As horrible as that sounds, this was such a moving story,” recounts Steve. “His dad requested to be buried in the ground in a pine box. The member started out building the coffin alone. Once other makers got word what he was doing that simple pine box became a work of art with incredible details. Community is a big part of what makes this place tick. You come in the doors as an individual, but you don’t stay like that for very long. That’s the great thing about a makerspace, it is like a living being, always moving, always changing, always evolving.”