The Best Little (sic) Job Shop in all of Texas

That really requires clarification: The Bell Helicopter Drive Systems Center (DSC) in Arlington, TX, can never be confused with anything “little”. It’s a huge facility, filled with the best and latest technology and equipment (milling, drilling, boring), gear manufacturing and roughly 600 cracker jack machinists, programmers, operators, engineers and technicians. Where DSC does resemble a small job shop is in its agility, flexibility and responsiveness, a unique ability to always find a better way, always on the fly. It is one great wheel of tools and teams spinning ferociously, pumping out safety-critical product in ever-shorter cycle times, while constantly reinventing itself. In Texas, there may be speed limits, but at Bell nothing’s slowing down

According to Mark Rudeseal, vice president, Drive Systems Center, Bell Helicopter (a Textron company) the last four years DSC has been under siege. When the government said they’d finally made a decision — the V-22 Osprey twin tiltrotor aircraft has been given the green light, the Marine Corps has committed to a four-year program — DSC was already a year behind on capacity. A snapshot of the last two years . . . a blur of tools, technology and teams playing serious catch-up.

So much for the plan

Manufacturing organizations like to have a smooth, primarily linear plan that looks ahead at least a couple of years. Sudden revolving, steep curves and quick ups and downs tend to twist and turn inside out even the best of plans . . . into just so much chaos. But that’s part of the art of managing a manufacturing plant. When the world changes, it doesn’t change five years out, so everyone can say, Oh, look at that dramatic change ahead! No, such dramatic change happens close in, and if you aren’t agile, flexible and quick, you’re going to get stuck, and you’re going to get hurt.

Rudeseal explains the chaos. When the demand for V-22 suddenly (with little forewarning) surged in demand, requiring immediate response, the balance of work in DSC had already been in flux. Output for commercial aircraft had begun to shake — not because the demand for Bell helicopters fell (orders were in fact high, but so too were cancellations).

“We had all of the year sold out,” Rudeseal recalls, “but then customers began saying, ‘We really need the helicopter, but we can’t get financing’.  Customers wanted to buy but couldn’t find backing capital.  So, we had quite a few customers who walked away at the last minute, saying they really wanted the aircraft, but couldn’t find the money to buy right now.”

Somewhere along the chaotic path DSC now found itself on (sinking commercial programs, military programs holding steady or rising, the V-22 suddenly spiking to life and into production), someone said, ‘guess what?’ The machine tools that built H1 program helicopters (four-bladed Hueys and Cobras), and those that built Jet Rangers, gunships, and so on, are not going to be nearly hefty enough for the V-22 work — very large castings and forgings for gearboxes, adapters, fittings and components. The current array of machine tools was not going to carry DSC to where it needs to be.

“We went out and started looking at what was available in the market that would meet our needs,” Rudeseal says, “and the big Starrag 5-axis STC 1250 was one of the first we looked at. We knew we needed a big, strong rigid machine from a builder who would stand behind the accuracies, guarantee accuracies in all the axes that we had to hold them. And this is where Starrag stepped up to the plate.”

Gerald Henderson, director, Manufacturing Support, Bell Helicopter, explains exactly how Starrag was selected as the Bell DSC supplier. “They guaranteed 0.002in true position on multiple bores,” Henderson says. “The proprotor gearbox has a number of bores, and Starrag guaranteed tolerances that no one else would sign up for. They ran a bore test that we designed. We had them drill 36 holes in a 2in x 3in piece of aluminum, but not just drill 36 holes in a line. No, they drilled 36 holes, then we rotated the B-axis 90°, and they drilled another series of holes, and then back and forth, thusly.

“Another reason Starrag was selected was they had the trunnion size table that we needed for the V-22’s big transmission adapter and the proprotor gearbox. So, they were able to hit the tolerances, had the trunnion table and other features DSC wanted and the price was competitive, plus they were enthusiastic about making the installation work. Further, Starrag standardized on Siemens 840D controllers for all their machines, meaning jobs and operators could fluidly move from one machine to another”, says Henderson. 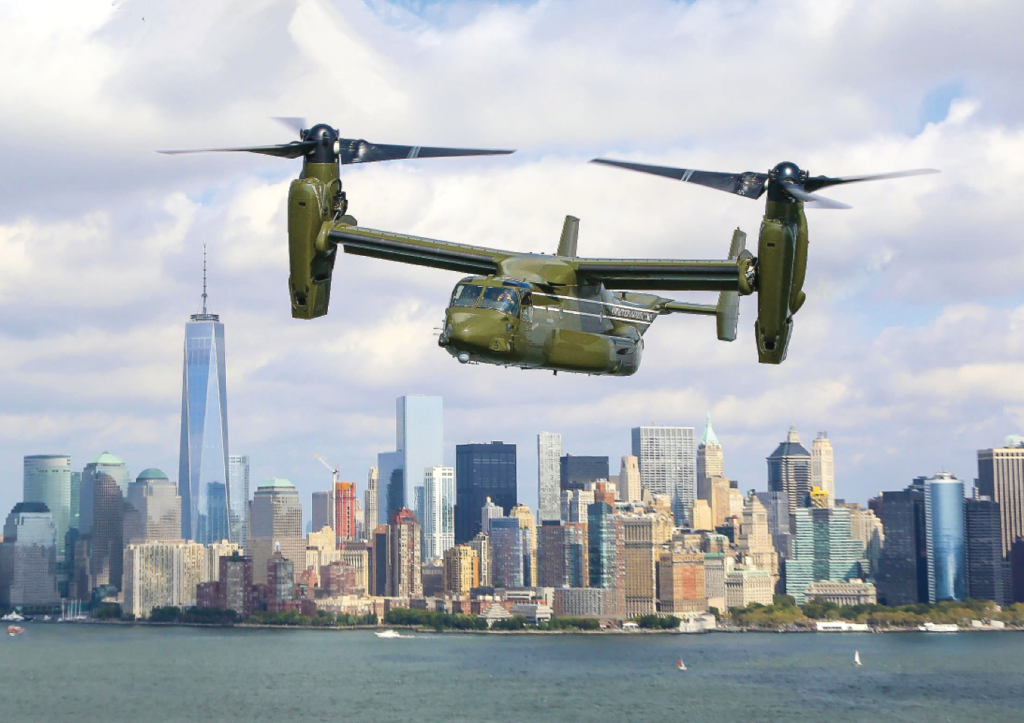 Boeing describes the V-22 Osprey as a joint service multirole combat aircraft utilizing tiltrotor technology to combine the vertical performance of a helicopter with the speed and range of a fixed-wing aircraft. With its rotors in vertical position, it can take off, land and hover like a helicopter. Once airborne, it can convert to a turboprop airplane capable of high-speed, high-altitude flight. This combination results in global reach capabilities that allow the V-22 to fill an operational niche unlike any other aircraft.

“From my perspective,” says Rudeseal, “one of the reasons we stick with Starrag rather than shopping around, resulting in dissimilar pieces of equipment and controllers in the shop, is exactly that. Flexibility to be able to move loads and work around depending on what happens moment by moment is critical at DSC. You can’t move work around very easily or inexpensively or safely if you don’t have the same controllers.

“We’ve great equipment engineers and process engineers and a solid, agile architecture where if we can put everything in place, we’ll have the accuracy, the productivity, and then the flexibility to adjust the loads. We’re becoming a very powerful manufacturing engine here. We are not there yet, but we can see the goal, and it’s not far off, that of being the premier manufacturer of gearboxes, period. Tolerance-wise, we’ve always been there.”

In addition to being flexible and agile to meet demand, DSC is also working on trying to reduce set-up and cycle time and hike throughput. “With the old method,” Rudeseal notes, “it took us 200 days to do a gearbox. That was the plan, and actually it took us more than 200 days. But when we put in the large 4-and 5-axis SIP jig bores, the 4-axis CWK 800s and the 4- and 5-axis SIP 7000s, plus the large case cell with the monster (twin 5-axis STC 1250s and a multi-story Fastem linear automated, programmable pallet load/unload, storage and retrieval system), we reduced planned cycle time down to a little less than 100 days. We cut it in half. We were able to achieve a 30% productivity output increase with all these new machines and combining operations. We went from around 300 boxes to 400 boxes a year, therefore, we probably did 40-45 percent more boxes.”

Henderson addresses the “uniquely high-precision nature of the DSC ‘job shop’.” The twin STC 1250s run at 6,000 rpm even though they have the capability of 10,000 rpm, he says. “The program is written at 6,000 because engineering doesn’t want us to run the spindle too high. They worry about the residual stresses on the material, the heat buildup. And we’re not really that speed conscious here. We run castings or forgings. We’re removing 0.0015in or 0.0016in material. We really are a precision shop. Our gears are AGMA Class 13. The only people who build a better gear is NASA (Class 14), and we’ve built a number of their gears.”

Casting material is pretty common, 8356 or 8357 aluminum and titanium. The grade of titanium is purified more than common through the smelting process. The steel is exotic, 9310 or H53 or Nitroloy. Very tough. Very tricky.

Henderson continues: “If I look at the performance of the two STC 1250s with the Fastem pallet system, fondly named the monster, these changed the game so much that now we just feed The Monster castings. I don’t know where we’d be if those two machines and that pallet system weren’t doing what they’re doing.

“It’s truly been the technology,” Henderson adds, “using the monster to feed the machines and the reliability of those machines. I’m not going to tell you that we didn’t work hard to get there. I had a lot of programmers work a lot of hours, a lot of operators on the floor that did some great stuff, a lot of rabbits pulled from a lot of hats.

“We’re changing the culture here. It’s like driving down the road at 60 miles an hour while changing the fan belt. With the huge spike in V-22 boxes, we still had to produce H1 boxes and commercial boxes — they couldn’t wait for us to get all the tape trials done and get the machines up and running.  We just had to do it. We had to do this while meeting all our schedules, and we did. We knocked it out of the park”

“Technology has made the difference,” echoes Rudeseal and cites an example. “We’ve had trouble with a supplier giving us the castings for the V-22 proprotor. They’ve been as much as six months behind. However, we never stopped the final assembly line. The only way we were able to do that is by not stopping at 100 cases. We’ve actually produced case sets in less than 30 days. We couldn’t have been able to do that with the old configuration, the old equipment. So, we were able to take being dealt a bad hand, and with great technology and the flexibility if affords, we’ve absolutely recovered to where the customer hasn’t suffered. We were late, yes. But they didn’t stop flying. The technology investment already has paid for itself: We saved the V-22 program.

“I’ll guarantee that had we stopped the assembly line for six months while we waited for castings, we would have lost our supporters, and we would have lost the aircraft out of the program. As good as the program has been, the government would have felt that Bell couldn’t keep up and couldn’t support the program. And two years ago that was the question: Could Bell keep up with the ramp? We proved we could, we were able to restore customer confidence. We saved the V-22 program, kept it alive and at Bell.”