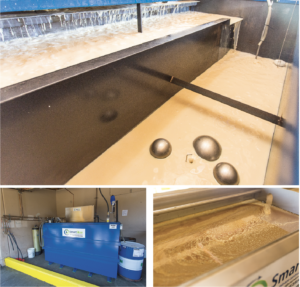 Top – The SmartSkim 900CL is split between 450 gallons of dirt coolant and 450 gallons of filtered coolant. Their float system allows the system to pull from the top of the surface where most of the oil and particles reside. It pulls the dirty coolant from the top into an oil filtration box.
Left – Golden State Engineering was short on space but once their removed the old evaporator there were able to find room for the SmartSkim system with only a few modifications to the location.
Right – The heart of the SmartSkim system is their CrossFlow tramp oil separator that separates and removes the non-emulsified tramp oils that find their way into the Golden State Engineering’s valuable coolant emulsion.

Golden State Engineering in Paramount, Ca. is a family owned and operated company. They are a fixture in their local community and have been for the last 49 years. Precision is their business, and business is good, but recent events in the news have the city and government agencies clamping down on local manufacturing. Golden State are doing their part to reduce emissions and provide a safe working environment, all without breaking the bank.

Golden State Engineering is primarily a high volume aerospace screw machine house, but is also a respected name in the commercial and medical sectors. “Aerospace is where we got our start,” tells Luiz Saguini, Golden State’s VP. “Our first customer is still a customer 49 years later. They needed a part for a customer that no one could manufacture. My father in-law was a great machinist and figured out a way to do it. We went from two machines to four and so forth.” Golden State has come a long way in those 49 years, they are ISO9001, AS9100 and ITAR certified and have nearly 70 CNC machining centers. Luis spent 30 years on the shop floor and has held every job in the company. “Grinding was my trade incase my father in-law decided to sell the company,” jokes Luis. “I loved it, but I don’t miss it. Running the company is a different set of challenges, but we have 200 people dedicated to making the best parts.”

Jason Neal is the facility manager at Golden State Engineering. His career in maintenance has led him through oil/gas and solar before landing at Golden State 6 years ago. “I’m not involved in the direct manufacturing,” describes Jason. “My role as facility manager includes maintenance and upkeep of all our machines, maintaining our four buildings, plumbing, electrical, equipment purchases, regulations, dealing with government agencies, employee safety, and even meeting with magazine editors. I wear a lot of hats every day.” Golden State has multiple buildings totaling just less than 100,000 sq.ft. of manufacturing. They have 67 CNC machines ranging from traditional and Swiss turning to EDM and CNC grinding, plus 5 axis verticals. They also have a sea of manual machines numbering in the hundreds all cranking out parts at a frantic pace. Typical runs are in the hundreds of thousands and up to a million pieces.

Jason has his hands full maintaining this vast fleet and the latest tool to help with that endeavor is a SmartSkim CL900 CoolantLoop Recycling System. “I spoke with Mark Kluis of SmartSkim long before we purchased the SmartSkim system,” tells Jason. “Management decided at the time that we were too short on space to add a system like this into the mix. It is hard to believe with all the building we have, but we are packed in tight with machines and anything that doesn’t cut chips is sometimes a hard sell.” Jason was helped out unfortunately by news reports in December of last year. “All our buildings are in Paramount, CA. and that poses certain issues when it comes to pleasing the city and the local residents,” describes Jason. “It doesn’t help when a couple of local manufacturers get caught releasing Chromium 6 into the atmosphere. The city came down hard on everyone. Having a conference room full of the AQMD, city officials, OSHA, sanitation, and the police is not how we want to go about our day. We were in compliance of course, but this got us thinking. What could we do as a company to keep us off these agencies radar without having a giant cost associated with it.”

Golden State, like most companies their size have an evaporation unit to help get rid of old coolant. Theirs required constant monitoring to keep the float adjusted correctly so it didn’t emit a smell. The city of Paramount has sniffers in the sky reading air quality 24 hours a day and 7 days a week. One sniffer unit is just downwind from Golden State’s primary manufacturing facility and the evaporator. “It wasn’t worth it anymore to even have the evaporator, but we needed an alternative,” explains Jason. “Air quality is a real concern for us, other local business and residents so I made contact again with Mark at SmartSkim to see about a coolant recycling system.” Golden State Engineering pulled the trigger on the SmartSkim CL900 CoolantLoop Recycling System in January as part of their 2017 company wide safety program and couldn’t be more pleased by the results and service they receive from the SmartSkim team.

The SmartSkim CL900 is a 900-gallon system split in half by clean and uncleaned coolant. Jason pumps the old coolant out of the machines via a Sump Shark and into the recycling system for processing. It runs of off air and goes about filtering the coolant without human interaction any time there is air pressure in the lines. “The heart of the SmartSkim system is our Cross Flow tramp oil separator that separates and removes the non-emulsified tramp oils that find their way into the customer’s valuable coolant emulsion,” details Mark Kluis of SmartSkim. “The system also removes particulates, both ferrous and non-ferrous, with various filtration systems, including high-powered rare-earth magnetics. Finally, the SmartSkim system infuses ozone into the coolant while it’s circulating within our processing tanks. The ozone helps kill and remove bacteria that are created with the presence of tramp oils.” Jason estimates his ROI will be well under 12 months, and is exceeding their initial projections. “I’ve reduced my coolant costs by half, my disposal costs by half, and even my water bill has gone down,” touts Jason. “I’ve gone the last two months without even buying coolant at all. Our SmartSkim’s ability to filter the coolant has surpassed our expectations. We had a machine with a hydraulic leak that turned all 900 gallons of our coolant brown. Hydraulic oil is not formulated to be emulsified, so we were concerned about the prospect of throwing out 900 gallons of coolant. We stopped extracting from the SmartSkim for two days and just let it run. It cleaned it right up, and got every bit of it out. We went from chocolate milk to nice and white again.” 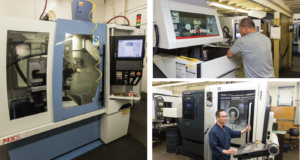 Golden State’s company wide goal is to be accident free in 2017. They started the first day back of the new year with a safety meeting and training. So far so good for the year, but they are not resting. New lighting, new employee dining and restrooms are all playing a part. “The owners have invested a lot of time and money into this being a safe and employee friendly work space,” explains Jason. “We have some of the nicest restrooms you will ever see, period. We are finishing up an employee dining area that is separate from the main building that doubles as our group meeting area. My team is installing new lighting throughout the shops to improve visibility. Every little thing helps keep all 200 of us safe and able to work.” Golden State Engineering proves that it is possible to please the neighborhood, and their employees, and still remain profitable by implementing new machines and technology like the SmartSkim.