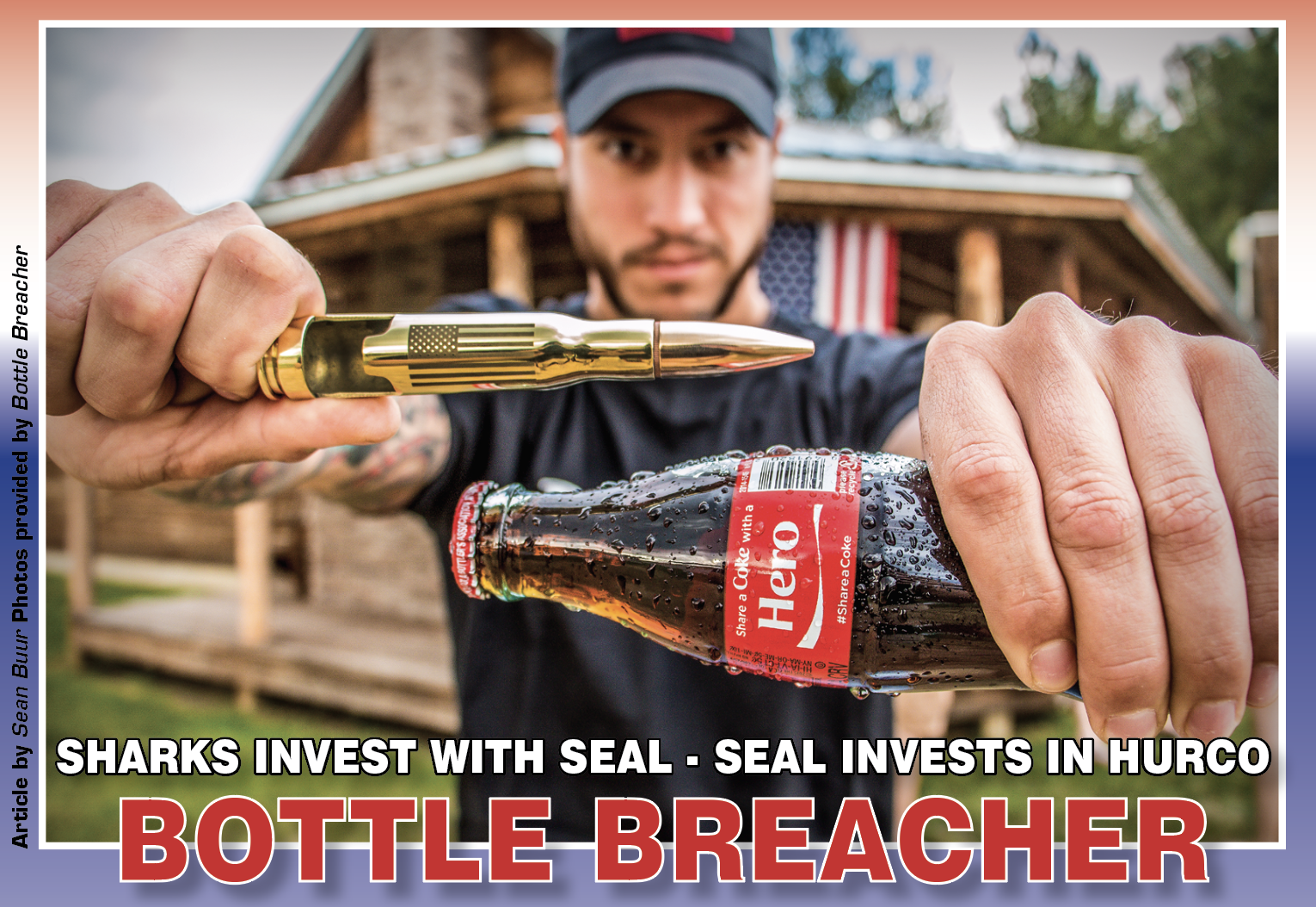 When Eli Crane was given a bottle opener by his brother it opened more than just a beer for this Navy SEAL.

Growing up in Yuma, AZ. Bottle Breacher’s CEO and founder Eli Crane never dreamed of being an entrepreneur. He was athletic, played sports and occasionally got into a bit of trouble. Pretty standard stuff for American boys and girls of his generation. That all changed for him in 2001. “I was a senior attending University of Arizona, Tucson when we were attacked on September 11th,” tells Eli. “The next week I dropped out of school and joined the Navy. Specifically I hoped to become a Navy SEAL and serve on the front lines.” Eli didn’t complete SEAL training on his first attempt and spent a few years on a ship growing up a little as a gunner’s mate. He got a second shot at SEAL training and graduated with class 256. “220 of us started and only 24 of us finished,” explains Eli. “I spent the next nine years as a Navy SEAL, doing the best job in the world.”

Eli and his wife Jen started Bottle Breacher five years ago while he was still in the Navy. Eli spent his days training SEALs to take down ships, and his nights in the garage building bottle openers. “Bottle Breacher began as a humble operation and even now we are still very humble,” explains Eli. “Jen was running her own boutique online business while I was deployed. She was and still is instrumental in our marketing and online sales programs.” Eli would love to claim credit for inventing the bullet bottle opener, but that isn’t the case. “My brother was deployed as a Marine in the Philippines and he brought me a bottle opener made from a 50. Cal bullet,” tells Eli. “It was just a generic casing, worn, vintage looking, nothing flashy, nothing about it caught your eye, but it was still really cool. I knew right away I could improve on the concept.” A breacher on a SEAL team is an operator who is trained to get into a structure they are assaulting. It could be a plane, buildings, ships, rooms, anything. A breacher has the training to get the team in mechanically or explosively. “You have to get into that bottle somehow,” laughs Eli. “So you might as well breach it. I wanted to name our product something that represented the culture and my background, but also something that was catchy, be easy to remember, and had a little mystique about it. Not everyone knows what a breacher is, so it opens up to the story. Story as you know is so important to PR and marketing.” Just like that Bottle Breacher became a thing for Jen and Eli.

Eli made his first 500 units by hand with a cloth measuring tape, a sharpie, and his Dremel tool. Each opener took 7 minutes just to cut out. The SEAL mentality knew there was a better way; he just needed to find it. “I built my first fixture out of an old broom handle,” details Eli. “At the time I didn’t know about the term lean manufacturing, just that I needed a faster way to measure and cut. The broom handle slid over the casing perfectly allowing me to draw the cut lines in seconds.” It was simple, but a huge technology upgrade that helped him with production numbers. The first generation Bottle Breacher was just spray painted with a sticker put on it, but the feedback he got was inspiring. “The initial openers I made had the SEAL Team 3 punisher logo on them,” continues Eli. “The light bulb just turned on when I saw the reaction of  the team. They ordered a bunch of them for family and friends. SEALs are some of the coolest people on the planet, and companies are always giving them shoes, glasses, jackets because of it. So if they liked the bottle opener, then the masses would love it too.”

Understanding all too well that garage production was working ok, but it wasn’t great, the Cranes began to research manufacturing solutions that could boost production, reduce costs and yield a better product. As they were trying to grow the company, Eli and Jen were avid watchers of the ABC TV show Shark Tank. “We were watching Shark Tank and the entrepreneur was getting ripped apart for not having any branding directly on his product,” tells Eli. “We decided we needed an engraver to brand our products. We didn’t want to dip into our small nest egg just to buy a beat up used engraver, so I sold my chopper and bought a brand new one.” Sales tripled nearly over night for Bottle Breacher. Not because of the branding, but because now they could offer a fully customizable product. “We went from being limited to happy birthday, to happy birthday Sean and your birthdate on it. We blew up with personalization.”

With good sales numbers, a solid business model, and an incredible backstory Jen and Eli got their chance to face the sharks on Season 6 Episode 8 that aired in November 2014. Understanding that bullets and firearms don’t play well on network TV in the modern world Eli knew that the likelihood of being picked for the show was slim. He also knew that they had a product that was perfect for TV. “Ultimately the show is about entertainment,” explains Eli. “We have a cool product, and I was sure America would love to hear our story.”  They went on the show, gave their pitch, and left with two sharks investing in the company. “Mark Cuban and Kevin O’Leary both were interested in investing with us,” touts Eli. “Having two sharks was an essential part of my strategy. In the military redundancy is key. We have the saying “one is none, two is one” I wanted two sharks, and we got that. The biggest thing I hoped to get from the show was a tactical partnership or a mentorship because I didn’t know squat. Getting that and 150k was even better. We used that money to invest in a Hurco VM20i milling center and bring our machining processes in house.”

As Bottle Breacher began the research process, Hurco machine tools were repeatedly brought up in conversation. Local area shops had great things to say about the brand’s durability and ease of use. “We could have saved some money going with a different company, but I wanted a machine that was going to last us a long time,” explains Eli. “I am not a machinist, I don’t employ any machinists and I didn’t want to become a machine shop. What I needed was something that was easy to run and maintain for non-machinists.” They bought a turnkey machining cell from D&R Machinery. It came with the Hurco VM20i, pallets, the fixtures to match their machined parts, and all the programming pre- installed. “The goal was to be able to cycle parts through with a minimum amount of effort and with low overhead,” continues Eli. “After a short training we were able to jump right in to manufacturing our own parts. The controls are easy to use and we’ve had no issues. The Hurco has been such a great investment for us. When we add a new product to our catalog all I have to do is make a call. We buy another custom program and set of fixtures and begin the in-house manufacturing process. We machine it, powder coat and do custom laser engraving all in our Tucson headquarters. These days we pretty much only send out the chrome plating and anodizing.”

Being a SEAL taught Eli a lot about limits, problem solving and how to think outside the box. Thinking skills are key when you are thrown into an unfamiliar and hostile situation and you’ve got to make the mission happen. That skillset has been beneficial for him as an entrepreneur. “I went into this business not knowing about manufacturing, or accounting, or even business,” chuckles Eli. “But I knew I could build a team around me that did.” He’s found that successful people share basic traits with Navy SEALs. They are not afraid to get outside their comfort zone. They have the mentality that they will figure it out and work harder than everybody else. And they are confident enough in themselves to find the subject matter experts who can prop them up in their weakest areas.

People don’t realize how difficult it is to go from being in the military to the private sector. If you don’t want a job in private security, law enforcement or as a fireman your choices are fairly limited. “The public needs to be educated in what our qualifications actually are,” explains Eli. “Too often a CEO or a manger looks at you and says oh you were a Navy SEAL, that’s super cool let me buy you a beer, but I don’t have a position for you.” Being a leader, problem solver, cool under pressure, dependable, disciplined, working with a team, teachable, all translate directly to the private sector. SEALs are the best in their business, and they have the skillset to be the best in other business too. “I’ve become a veteran’s advocate, and am trying to teach those CEOs how valuable we are in the work place,” concludes Eli. “Our skillset is more than just being a sniper and blowing things up. I hire veterans, and contract out with other veteran owned shops whenever I can. I try every day to pay my success forward. You can serve this country in a lot of ways that don’t require a mission and a gun. Being a SEAL was an awesome job. I got to fight real evil in the world. The knowledge I gained was amazing, and the brotherhood and camaraderie are second to none. Looking back I am so blessed and fortunate that I got to be a SEAL, but I can’t rest on what I did yesterday or today. I need to keep moving forward, pushing new envelopes and increasing the pace. Bottle Breacher is my current challenge, but isn’t going to be my last. If you are going through your life and not thinking about how you can positively impact people I think you are missing out on a lot.”