Quality of Manufacturing at the Core of Success at Twachtmann Industries 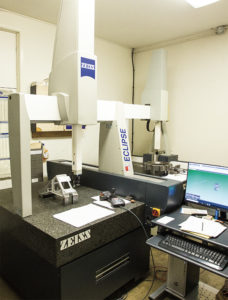 Zeiss has always been a part of the quality department at Twachtmann Industries, but recently they added a new Zeiss CMM with CMM Manager software and Renishaw PH10T head. The motorization on the CMM puts them up to a whole new level of inspection; it puts them where they want to be now and in the future.

“I joined the Marine Corp right out of high school,” tells Ted Twachtmann, founder of Twachtmann Industries. “I didn’t know what I wanted to do specifically, but I figured military life would be easier than working on my family’s farm in Iowa.” Ted actually re-enlisted for a second time after returning to Iowa for less than a year. Farming clearly wasn’t in his blood. His first job in manufacturing came in high school working for a company that made Dayton electric motors from start to finish. He did various jobs throughout the company from sweeping floors to working on machines and in the foundry. He quit that job when he joined the Marines but they liked him well enough to hire back once he got out the first time. “I got a broad education about manufacturing, but it wasn’t until well later when a potential employer asked if I could make a part off a print. My only machining experience had been limited to my job in high school. I remembered enough to make the part, then another and then more. I was hired on as a machinist.”

Ted had an undeniable knack for the job and ate up any knowledge that came his way. “The veteran machinists saw that I really wanted to learn and showed me more and more,” explains Ted. “Pretty soon I applied for a job as a CNC setup guy having never actually operated a CNC machine before.” He spent the weekend at the library learning what a CNC operator did and how the machines worked differently than the manual machines he was used to. Monday came along and he had his first CNC based job. “The job paid more and I really liked it,” details Ted. “I got pretty good at it and moved up through various jobs and companies. Funny thing about this business is that if you want to learn there are people willing to teach. You are only limited by yourself. It wasn’t that long before I was running a sizeable operation with 75 CNC machining centers. Everything was going great, but it wasn’t my company.” Ted’s opportunity presented itself when a former employer told him that his dad was getting out of the business and was selling everything off to a machinery dealer. He suggested Ted buy it and go into business for himself.

In 2006 Ted quit his job and opened Twachtmann Industries LLC. He purchased the machines, support equipment and even a forklift to make it nearly a turnkey business. “Even though I had done all the jobs at different times in my career no one ever tells you how hard it is to run your own company,” explains Ted. “You think as the employee that the owner does nothing but sit in their office while you do all the work. That is not the case obviously. I had a few customers lined up without taking any work from my employer, but I still wasn’t fully prepared for the experience. So many little nuances make a big difference. Like if you slow down a little bit and you have good machinists sweeping floors. That is costly, but no one wants to let a good employee go. The recession hit during our infancy and that taught me a lot about running the company. It hit us harder than I would have liked since we were a new business. We’ve made an effort over the last few years to target more long-term projects to reduce our exposure when things slow down the next time. Shops survive by making quality parts. I think if you are making quality parts right now and doing a good job for your customers that you are busy. Business is taking off for us as a direct result of our quality. Word of mouth has netted us new and exciting programs.” 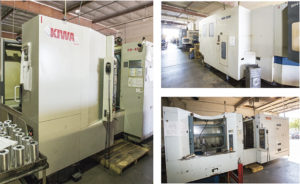 Ted is a machinery salesman’s worst nightmare. He buys quality machines and keeps them for as long as they can do the job well. Twachtmann Industries relies on trusted industry brands like Kiwa, Mori Seiki, Hwacheon and Takisawa to hold the tight tolerances needed in aerospace and defense.

Twachtmann Industries run the gamut on machines and rely on trusted brands that service a broad range of capabilities. If you examine the shop layout you won’t find any brand new machining centers. You will see a pair of Mori Seiki horizontals, two Mori ZL15 dual turrets mill turns, Kiwa horizontals, a couple of Haas, a couple of Fadals and even a few Takisawas. Ted has a proclivity for owning a good machine that last for a long time. “We hold tight tolerances on machines that have been around the block a time or two,” details Ted. “We earn a lot of our business by being able to produce parts that other shops can’t. Mori’s are sold round the world as a machine that stands the test of time and every bit of it is true. I’m interpolating 2 tenths tolerance on 3” diameter bores. I don’t use boring bars, we interpolate everything. Machining ability along with a good quality machine makes all the difference. We just landed a big casting job because the customer pulled it from another shop that couldn’t get it done right.” The part mentioned presents some unique challenges that require a little more time and effort than a standard “grip it and rip it.” It is a 24” tuning fork looking chunk of aluminum casting that has to be parallel on the ends, and there is no support. You can take your fingers and press on it and see it movement. Five pounds of pressure can shift it a hundred thou. It requires some extra technique to get it machined. Clamping and indicators hold all the secrets to success on this particular part. “We use minimum of four indicators just to load the part,” explains Ted. “It sits at zero in a free state and it still needs to be zero when it is clamped down. It is part of the Boeing program and they were way behind schedule when we got the job. We committed to the purchase of a six pallet Kiwa machining center and a Zeiss Eclipse fully automated CMM to help them get back on schedule.”

With an estimated doubling of production by as soon as next year Twachtmann Industries needed to up their quality game. With more speed and better accuracy Twachtmann’s quality lab can now keep up with the demand. The Renishaw head and CMM Management software reports were two key features Ted and his team were looking for when they decided to upgrade.

Twachtmann Industries is also on long term contracts for the growing 737. “Boeing is building a lot of planes right now and ramping up production,” details Ted. “It is good for our for business to be part of such great programs. The issue with producing a lot more parts is we saw a bottleneck coming in our quality lab. We needed a way to verify our quality faster.” Twachtmann Industries already had two Zeiss CMM machines in use, but they needed something newer and much faster to keep up with their growth. “Zeiss has been great to us over the years so there was no doubt about what brand machine we were going to purchase to replace our oldest CMM,” touts Ted. “We stuck with the Zeiss because we were already familiar with them, but more importantly they keep producing a better and better product. Art, my quality manager and I looked at what was available and decided the Zeiss Eclipse with the CMM Manager software was the best solution for us. We added the Renishaw PH10T fully robotic head and it checks these parts in every way we need it to. Our older DCC manual CMM machines were great, but a little antiquated. The Eclipse is fully automated and kicks out a report at the end of its scans. Zeiss has always been at the forefront in the CMM arena, but little things like the solid cross beams impress the hell out of me. They have that old school machining mentality of having a solid feel to it, and that really delivers results. Not just results, but ultra repeatable results. It is not uncommon to measure a part 10 times and get ten different readings. All are in spec, but they are still different. The Zeiss Eclipse doesn’t have that issue. We measure and it gives us a reading, then we measure again and it gives the same reading. I measure it again and holy cow it is the exact same. We can go out 5 places on the decimal and it is the exact same every time. Sales guys lie a lot about capabilities, but this CMM delivers better than the brochure.” 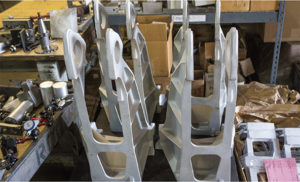 Via word of mouth Twachtmann Industries has become the go to shop for difficult parts others can’t machine. These castings present some unique challenges that require a little more time and effort than a standard “grip it and rip it.”

The 737 projects have turned out to be a great thing for Ted and his team. On multiple parts they are doing everything from the machining, to anodized painting, and even assembly. “Parts need to be 100% inspected,” tells Ted. “The motorization on the CMM puts us up to a whole new level of inspection; it puts us where we want to be now and in the future. When we got these jobs the customer was 3 months behind. We are now back on schedule and a lot of that comes from our quality department being able to check so many more parts in a shorter time frame.”

Twachtmann Industries is a true mom and pop shop. Ted does all the programming to support two shifts and 10 employees while Linda, Ted’s wife handles all the accounting and day to day operations. The company is driven by their dedication and love of machining quality parts. That enthusiasm was echoed throughout the shop. “The stuff we are doing as an industry is always evolving,” concludes Ted. “What we do is different every single day. It is a really exciting time to be in this business. You have to engineer parts that have never been done before. This industry doesn’t get the credit they deserve, but we love being a part of it here at Twachtmann Industries.”