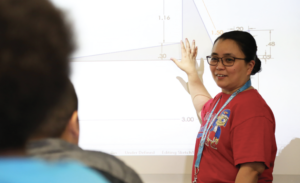 Today, computer programming is taught at just about every level in high schools and colleges across the country.  Now, when you consider that very young children easily learn language skills, and that computer programming is considered a language, wouldn’t it seem logical that very young children would also be able to learn computer programming?  In fact, in manufacturing, there has been a call to introduce concepts at a much younger age than high schoolers. Here’s a case in point that is proven every day at Captain Leland F. Norton Elementary School in San Bernardino, California, where programming has become an integral part of their STEM program, all the way up to and including Mastercam®, which is state-of-the-art CAD/CAM programming software.  “We have a little over 500 students in the program,” said Elizabeth Cochrane-Benoit, the school’s Principal, “from kindergarten through sixth grade.  Our goal is to show them that what they learn in our STEM program relates to real-world jobs.” 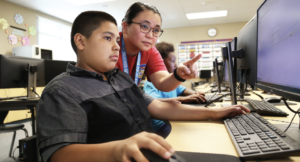 The programming journey begins in kindergarten and extends into second grade with Tinkercad™, a free online collection of software tools that allow Leland Norton’s beginners to design a wide range of projects.  Think of a child learning the ABC’s as the start of learning English, or Spanish, or French, for example.  Similarly, a programming language starts with the basics, in this case Tinkercad, to form the foundation.   “In the third grade,” said Cochrane-Benoit, “we move into CorelDRAW®, which is an introduction into SOLIDWORKS®.  Even the early projects are mathematically and scientifically driven.  The teachers build out yearlong lesson plans that are aligned with next-generation science standards, integrated with common-core standards.”

In their computer lab they have a project management board based on those found in a real manufacturing company.  There is a start date and a scheduled completion date.  Also noted are any problems occurring that could affect completion.  The project for first graders, for example, is to create the life cycle of a plant.  Beverly Sayson is a STEM instructor at the school.  “The children must first draw a blueprint of the different parts of a plant,” she said, “such as the stem, leaves and flower and lay everything out in Tinkercad.  Then, I will produce the plants in one of our 3D printers and give them to the students.  It’s exciting for them to see the progression from an idea, to a drawing, to an actual plastic plant they will take home to show their parents.” 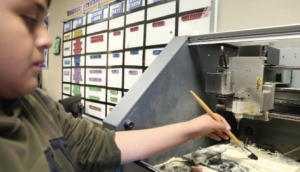 The project for the second graders is to make a planter box for the plant.  “This is where they incorporate math into their design” said Sayson, “because they have to calculate specific measurements that will result in a blueprint for a three-dimensional object.  In third grade, the students solve mathematical problems.  Based on their answers, they will form a representation of a particular object, such as a cat or a clown that they would then lay out in CorelDRAW.  Another project we give them is to draw their dream house, as well as their dream bedroom for that house.  After creating their blueprint, they will go into the computer lab and lay out their dream house and bedroom in CorelDRAW.”

Students are introduced to SOLIDWORKS in the fourth grade.  Their current project is to design a solar car, employing SOLIDWORKS for the basic design and then using Mastercam Art for the more intricate components.  Mastercam Art is a single software package that lets a student bring a project from a 2D drawing on screen to a beautifully sculpted 3D object completed on a CNC machine.  Mastercam Art includes visualization tools and instant editing features that are easy for the instructor to teach and for even very young students to learn.  “Our school is environmentally focused,” said Cochrane-Benoit.  “To this end, our fifth graders have been creating slogans that have themes aimed at protecting the environment and then using Mastercam to cut out plaques incorporating these themes on our CNC laser cutter.  The plaques are of different media, such as cardboard and wood.”

This year, the sixth graders are creating replicas of the solar system using many of the tools in Tinkercad, CorelDRAW, SOLIDWORKS and Mastercam.  “At this point,” said Cochrane-Benoit, “they know all four software systems and must integrate them all in bringing each planet from a drawing, to an isometric blueprint, to a 3D object.  They have a choice in determining the final production.  Some of them will transfer the program to one of our Stratasys® uPrint 3D printers to make plastic planet components.  Other students will opt to cut them out of wood or plastic on the Universal® laser cutter, while others will load their programs into one of our Roland® MDX40 CNC milling machines for some exciting chip making production. All these components, in different media and produced on different machines, are assembled into an accurate representation of the solar system either as a mobile or on a mounting board for display.  They have demonstrated that they have an excellent working knowledge and skill sets for programming as they move on through high school and eventually the job market.” 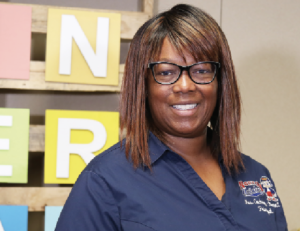 The school has 35 software seats in the computer lab.  Because the different software systems are so well integrated, students are not apprehensive about learning a new system as they advance in grade.  “They just move right along,” said Cochrane-Benoit, “going from SOLIDWORKS into Mastercam, for instance, as stress-free as going on to the next chapter in a reading assignment.  There are a few struggles, of course, as they would have learning any new language.  When we first decided to include computer programming in our STEM program, I knew I had to go get myself training in this new endeavor and invited a few teachers to go along with me to learn the SOLIDWORKS software.”

Ms. Cochrane-Benoit and her teachers attended training classes for educators held at Technical Employment Training, Inc. (TET), a San Bernardino non-profit business and education cooperative that provides manufacturing trades education and hands-on skills.  “When it came to learning some of the programming steps,” said Cochrane-Benoit, “the teachers saw that I was struggling a little bit and wanted to help me.  I told them no, that I had to work it out myself as though I was one of our students struggling with a problem.  That is the best way to learn, by working through the problem to find the solution.  We have to keep in mind that each student is learning how to program at his or her own pace, just as I had my own pace learning SOLIDWORKS.”

After completing the SOLIDWORKS training program, Ms. Cochrane-Benoit and her teachers met with representatives of local manufacturing industries and discussed their needs with regard to new employees’ programming skills.  “This is when we learned about the role of Mastercam in the manufacturing process,” said Cochrane-Benoit, “and I knew we had to integrate their software into our program.”  Once again, the same teachers joined Ms. Cochrane-Benoit in a series of training classes, this time to learn the basics of Mastercam.  “Today,” she said, “instructors from Technical Employment Training come to our school on a regular basis to teach the CAD/CAM programming systems to all the teachers in our STEM program.” 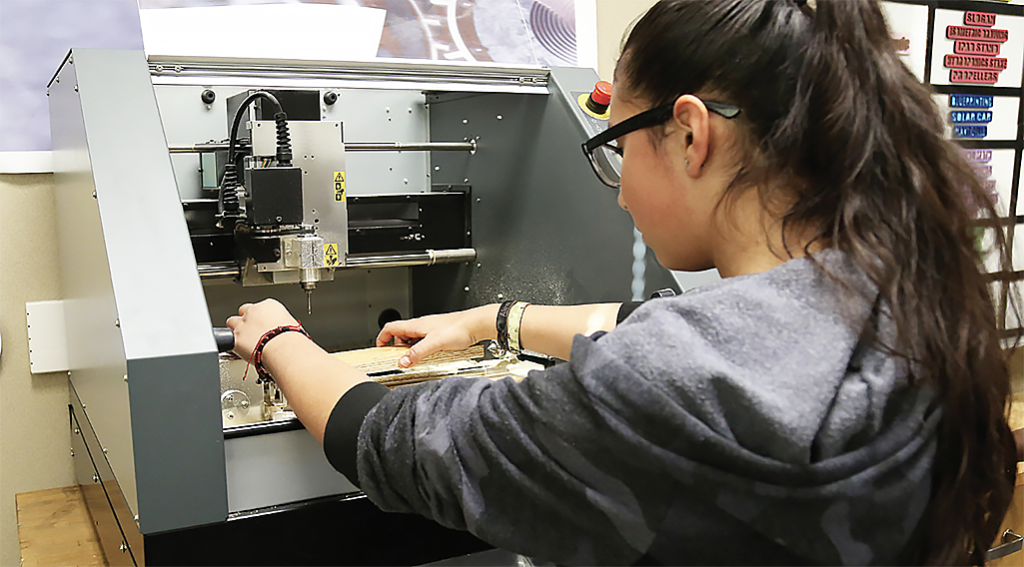 Alexa Aquino (age 13) sets up a work piece on a CNC milling machine.

The school’s relationship with Technical Employment Training goes back quite a few years.  “Some time ago,” said Cochrane-Benoit, “ our 4th grade students were having assessment problems.  What we saw was that they were able to articulate their learning orally, but were doing poorly in the written tests.  We discovered that many of them needed eyeglasses.  Either they could not afford eyeglasses or their eyeglasses were broken.  We created a project-based learning lesson where the students would design their own eyeglass frames.  We went out into industry, looking for a company willing to partner with our students to manufacture the frames the students designed.  Technical Employment Training’s Dr. Bill Clarke came through for us and as the project progressed, we were introduced to CNC machining and the various CAD/CAM programs.”

When the project was over, though, the company’s relationship had really just begun.  “Dr. Clarke thought he was through with us,” said Cochrane-Benoit, “but I told him, ‘Not so fast.  You’ve been telling our 4th graders about Cartesian coordinates and that there are three axes of learning.  These kids are really smart and want to be able to actually do the programming you have demonstrated to them as you made their eyeglass frames.  The learning process must continue’.  Dr. Clarke did not think such young students were capable of learning SOLIDWORKS and Mastercam, but at the time, Frank Paton of The Paton Group in Altadena, the SOLIDWORKS and Mastercam reseller, happened to be standing nearby and overheard us.  He told Dr. Clarke that they were perfectly capable of learning the CAD/CAM software language, so long as the teachers were properly trained to teach it to such young minds.  The STEM program we have today evolved from that discussion.  The Paton Group has supplied our equipment and software, but more than that, Frank Paton along with Chris Miller and Brad Roa of the Group have always been available to answer questions and help us through any ‘snags’ that might occur during one of our projects.”

The STEM program at Captain Leland F. Norton Elementary exemplifies the school’s mission statement.  “We strive to provide students with foundational skills,” said Cochrane-Benoit, “by balancing technology with a rich context curriculum through explicit teaching of the thinking skills needed to compete in the global economy and by showing them what they are learning is relevant to the real world around them.”