Precision and Efficiency Keep AceCo on the Fast Track to Growth, Success

Top – Seth Cornell programs a 90k Display Diffuser with 156,852 holes that are drilled at separate times during different operations- yet must be concentric within 0.010”. They are all drilled with the “Rubik’s Cube” approach.There is also a camber milled into the side of the workpiece as well as a 3/8” deep spherical surface milled on top. “If you think of a Rubik’s Cube that is what our drilling pattern is like – it is all mixed up.” The Rubik’s Cube
Middle – Example of the border created while using the single spindle method.
Bottom – Example of a multi spindle solution saving 26hrs. per drilling cycle.

When a customer demands precision tolerances on challenging CNC-machined components, they often turn to AceCo Precision Manufacturing. Headquartered in Boise, ID, the company has been serving the semiconductor, TFT-LCD, and solar industries for 25 years, according to President Sid Sullivan. Known for their high-precision work, AceCo has seen their share of growth and success over the past two decades. After branching out and creating a dedicated repair facility in 2005, they were able to continue this expansion and establish a facility in Singapore to serve their clients based in Asia. Now, with five different locations, 152 employees, 47 machinists, four engineers, and a total of 65,000 square feet of manufacturing, they are not stopping their growth any time soon. “We have started the construction of a brand new facility with 92,000 square feet,” said Sullivan. “That will help us consolidate some of our operations, but when it’s all said and done, we will have about 125,000 square feet of manufacturing facility.”

AceCo’s clients rely on the company to create sophisticated products with high precision and intricate features. To give the customers what they want, one of AceCo’s lead programmers, Seth Cornell, calls on the features of his Mastercam® CAD/CAM software.  AceCo uses Mastercam 2019 Lathe, Mill-Turn, Mill, and Router to optimize their router and 5-axis machines.

Cornell, who worked at the company as a machinist for 14 years before learning Mastercam, explained that the most important thing for him as a programmer is to be able to a make a good part the first time around. The parts he creates start at $13,000 in material costs alone, therefore having a set-up piece is not an option when the cost of the material is so great. “With that being understood, the most critical things for me in Mastercam are the verification tools,” Cornell explained. “I need to be able to view and verify the cuts I’m taking. Being able to qualify it as well as I can on the screen before it goes to the shop is very, very important.”

Getting it right the first time is one of the most crucial elements for Cornell, as one part has 170,000 holes and retails to the customer for approximately $65,000. This means starting over is not an option. “Not one of these holes can be wrong,” he said. “We have to be able to make a good part on the first attempt. Sometimes that takes a little bit of thinking outside of the box and a few more steps in the software in order to accomplish that.”

These complex cuts and drilling wouldn’t be possible without using this software. “There would be no way we could do it without Mastercam. We couldn’t even begin,” said Cornell. “It is also very user-friendly. It does take some time to learn but I really like all of the shortcut keys that I can set up.”

One shortcut that Cornell often turns to is the Dynamic Transform function, especially when he is overlaying a drill pattern. “We are basically mixing up all the holes intentionally. If you think of a Rubik’s Cube, that is what our drilling pattern is like – it is all mixed up,” he explained.

“I identify what section of the drilling pattern will be done by which spindle. I have three spindles to run. I identify the system of points that will be done by head 1, head 2, and head 3. After doing that, I then go into the program and I change the attributes of those points so that I can see the difference between each point and then I scramble up the ‘Rubik’s Cube’ in a very systematic and intentional way. Then I go back, and I segregate those points. Because I have changed their attributes, I can use Mastercam’s sorting tool and go to the ‘select-only’ function which allows me to grab all similar points and segregate them out of the rest of pattern and still be able to see what I’m doing, even though it’s a scrambled ‘Rubik’s Cube.’”

According to Cornell, being able to do this would be absolutely impossible by hand or without software. Using the software’s functions at this level has been invaluable when presented with challenging parts from their customers. He explained that a client wanted a pattern with unique drilling patterns, and each corner also had different depths. Since Cornell didn’t have the ability to change the spindle depth on the spot during a drilling cycle, the quickest and easiest solution was to create a border before hitting the depth change, do a 3-spindle pattern inside of that border, and outside of the border use a single spindle, which left about 17k holes all to be drilled with a single spindle.

Cornell added, “I figured out a way to segregate that triangle and make it work where all three spindles skip that triangle, and I was able to do away with a single spindle pattern. I was covering that same area yet skipping the areas that I needed to. Then I would go back and fill in those triangles that are supposed to be the same depth as the majority, while omitting the one that needed to be a different depth. In doing this it saved 20 to 26 hours per part.”

This time savings was so significant, they presented it to the engineers at their client company. He was able to continue making the part with this 20-hour per-part savings and created other parts for the customer.

AceCo’s clients definitely push them to create new and challenging parts with the high-precision they have come to expect. For example, Cornell was able to use the software in a very unique way when asked to create uniform radii on 65,000 conical shaped holes within a spherical surface. With the challenging parameters that were required, it made any sort of special form tool to mill on the radii not an option. “We decided to use a silicon carbide brush and program an orbital motion that would penetrate into the top of the cones while matching the concaved surface. To get the toolpath created for this took some creative thinking, and perhaps some unorthodox use of Mastercam,” Cornell explained.

“There was much testing, trouble-shooting, and secret sauce created during the process and ultimately we were able to create uniform radii ranging from about 0.006 inches to 0.010 inches across the entire array of 65,000 conical holes along the 7- x 6-foot spherical surface,” Cornell added. “I was quite surprised with the versatility of Mastercam to allow me to execute this. Our customer was very happy with the result.”

Since Cornell’s customers rarely give him solid models, he creates them himself in Mastercam Solids. “The way that Mastercam helps me when creating these models is that I’m able to view right on the screen what I’ve created. In other words, sometimes what our customer asks for and what they want are two different things.” 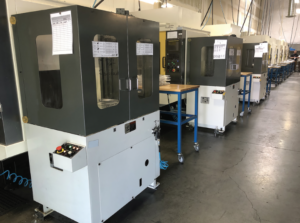 Here are 25 FANUC Robo Drills. Twelve of the Robo Drills have automatic pallet changers as shown in the photo.

Cornell also relies on other features of the software to save time such as the tool library where he keeps previous models. He uses this tool library along with all of the tool holders drawn out. This is another critical part of verifying as he needs to be able to see if the holder is going to hit the part. He is able to realize ahead of time if he is too close to hitting the part and shanking it out. Additionally, Cornell turns to the Dynamic Milling toolpath and uses the sorting functions that come with that in order to sort tens of thousands of points and get the drill pattern to do a specific geometry. “Without that sorting option, we could not make these parts,” Cornell said.

It is not just the semiconductor industry that benefits from the company’s high-precision work. They were able to use these talents and work with a nationally-known orthopedic surgeon to create the Cuff Repair Plate that could be implanted in high trauma shoulder rotator cuff damage. “It is a very complex part and a very interesting process because you don’t just go and make implants without have certain certifications and quality programs in place,” Sullivan said. “It really raised the aptitude of our company because of it. Because of the way our company was set up, we never take any of the quality designations and say that they only apply to a certain facility. So [our customers] get the best practices of [every qualification].”

The challenges from their customers is what has kept AceCo moving forward, according to Sullivan. They are creating things today that five years ago just could not be done. “Through trial and error, we work with our customers and identify machining methods that other people might simply walk away from,” he added. “The innovation that comes from our customer demands is incredible.”