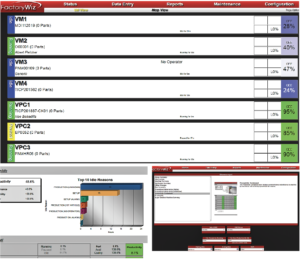 Top – The list view can be view from all of PNM’s computer terminals throughout the office so managers can see how the shop is running.
Left – Reports showing idle reasons selected by PNM operators. They use this to see where the majority of their time is lost and discuss in their daily huddle or weekly production meetings.
Right – Report menu. This is where PNM Management runs reports and looks for the idle areas to see what they can improve to maximize production.

Since 1976 PNM Co. CNC Machining has called California’s central valley home. As one of Fresno’s leading manufactures, they pride themselves on changing people’s lives with every part they machine. Now with the help of a FactoryWiz monitoring  system by  Northern California based Refresh Your Memory they are doing it more efficiently.

PNM is a job shop with decades of experience in the medical industry. Their expertise began out of necessity when a friend was paralyzed in an accident. “Our owner and a few others got together to machine wheelchair solutions for their paralyzed buddy,” explains PNM director of operations Mario Persicone. “He went off on his own and formed PNM Co. in the late 70’s and 40 years later we still remain a leader in wheelchair technologies.” With 20,000 sq.ft. of manufacturing and another 10,000 sq.ft. building dedicated to assembly and warehousing, PNM utilizes every one of their 48 full time employees. “Medical is our primary industry, serving a variety of customers in the wheelchair industry,” continues Mario. “But over the last decade we have worked hard to diversify our customer base.  Sixty percent of what we run is aluminum with the remaining 40% a mixture of stainless, plastics, and mild steel. It was easy for us to evolve into other industries like automotive, pumps, camera and other commercial industries. If there is production involved we love it.”

Mario Persicone has been in the trade since 1988 when he started with PNM right out of high school. “I got my first job here with PNM as a janitor,” tells Mario. “From that first day I fell in love with the trade. I moved to other shops in the area and gained experience everywhere I could.” He has run the gauntlet of the trade as operator, setup guy, programmer and designer and in 2001 he returned to PNM to head up their prototype division. “PNM was always home”, describes Mario. “It is a family run business and we are all family. We work together, we play together and that atmosphere makes PNM a great place to work.” Mario has been director of operations now for 6 years and misses being on the machines, but this position has rewarded him with different types of challenges.

One of the challenges Mario, and everyone else in his position are faced with daily is how to keep the spindles turning. PNM runs two shifts a day covering 24 hours and is manned 7 days a week, but Mario was questioning if they were at capacity. “We have 20 CNC mills and 10 CNC lathes,” explains Mario. “We are on Kanban systems and have customer stocking programs paired with our JIT manufacturing. We have 2 day lead time for stocking parts so we carry a lot of inventory. More and more we are automating how we manufacture by adding palletized horizontals and robotics.” As a job shop PNM’s needs change every time the phone rings so Mario has a variety of equipment at his disposal. PNM can be categorized into three primary manufacturing departments: horizontal mills, turning and verticals mills. Machines range from Swiss style machining centers to horizontal cells with a total of 66 pallets. “We feel here at PNM that our biggest competitors are Mexico and China,” tells Mario. “So any time we can see high production with low labor interaction we are very happy. It is technology, pallets, robots, and automation that allow us to compete.”

PNM recently added FactoryWiz machine monitoring to their vertical department and was quickly rewarded with results. “We love our E2 Shoptech ERP system,” details Mario. “It has been great over the years and we get a ton of information from it. That being said, there were things I wanted to see as a manager that it didn’t provide.” The daunting task of researching machine monitoring systems began at IMTS in 2014 and it took two full years before pulling the trigger. “PNM’s design engineer, Gary played a pivotal part in us getting the system,” continues Mario. “I told him I wanted it and couldn’t live without it, and he dove into the research we could take to the owners.” They hit trade shows, spoke with other companies, and ultimately were impressed with John Hosmon and FactoryWiz. “John was really easy to talk to and understood what I needed. I didn’t want a huge elaborate system, just one that detailed basic items that I specified. I needed real time data of machine on, machine off, and why.” Key elements of PNM choosing FactoryWiz were flexibility, ease of use, price and customer support. You don’t need to be an IT expert to run FactoryWiz and Mario loves that.

PNM is implementing the FactoryWiz upgrade in three installments. They began with the vertical milling depart which consists of 12 Haas VF2 machining centers. Four of their machines have aftermarket Midaco pallet shuttles connected to them. “I wanted to get settled in and running as quickly as possible,” explains Mario. “Learning the ins and outs of the system would be way easier on a smaller scale doing it in phases. Phase one was our vertical department and it is running strong.” Mario targeted that department because the machines were all the same and he felt the biggest gains could be netted back to him the quickest. They installed the system late last summer and were full gas on it by January 1st. Mario’s original plan was to install the system without monitors on the shop floor so only management could see the data. His though was that he could have a baseline for comparison, but was persuaded otherwise. “Talking to the FactoryWiz people they convinced me the performance gains by having shop monitors would be noticeable right away,” details Mario. “It is better to increase spindle time as soon as possible then to dwell in the past. They were totally right. Once we put two centralized monitors in the milling department the awareness of our operators heightened. We have a great bunch of hard working guys. I feel they are the dream team, so consciousness of how much time the machine sits idle came to a shock to us all.” PNM discovered right away that as a shop they were not being as efficient as they could, and it started at the top and not with the operators. The FactoryWiz software showed that first articles and no operator where two of the largest contributors to machines sitting idle. By upgrading their CMM software first article inspection time was reduced by 1/3 and a simple revaluation of when/how shifts start and end netted easy gains. 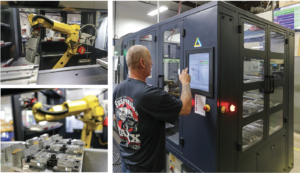 PNM just added a new Trinity robotic cell system attached to a Haas VF2ssYT with 42 tools. Mario estimates that with all 56 pallets populated that they will net 12-14 hours of run time with only three man hours of labor. PNM considers Mexico and China as their biggest competitors so any time they can see long production runs with low labor interaction they are very happy. Pallets, technology, robots, and automation keeps them competitive.

FactoryWiz advocates the use of tablets at every machining center, but PNM installed PC laptops to tie in with their ERP system. They are transitioning into a paperless system and their ERP requires a PC. The laptops have worked out great to run their two most important shop systems all in one place. “We didn’t want a system that required my guys to spend a lot of time typing in information,” tells Mario. “So we broke it down into simple dropdown menus to select the idle reason. My opinion is we don’t need 1000 reasons for idle time. Idle is idle, but are they not running because of doing a setup? First articles? Broken tool? The system is smart and once the machine is back running my operator selects the reason from the dropdown and it goes back to the last idle time in the system. We had Rich Hefner at FactoryWiz add us in a “summon supervisor” button so an operator can type in something like “need coolant”. Need coolant then flashes up on the monitor and someone who is not on a machine can go get coolant and bring it to that work station without the operator leaving his machine. Those little tweaks all add up.” Right out of the gate putting the monitors in the sky gained PNM a 10% increase in spindle utilization.

The buy in from the entire PNM team was nearly instantaneous. Operators love being able to see real time information and compare it to the rest of their colleagues. Mario’s top producer Mark keeps his spindle turning 90% of the time and the others do everything they can to match his numbers. They see how 2 minutes idle here and a five-minute idle there really impacts their numbers at the end of the day. The proof is in the numbers, and you can’t cheat the system. “We have profit sharing here at PNM and every dollar counts at the end of the year,” expands Mario. “My operators make choices all day long based on those numbers in the sky. Instead of grabbing a soda mid cycle they will wait until they start the next cycle to maximize their numbers. Everyone still gets to drink a soda, but they are making a conscious choice of when is the best time to grab one. My employees are the heart beat of this company and they love having control over the numbers they generate. Plus as a manager it shows where I need to improve at delivering them the best tools and processes to do their job.”

The FactoryWiz system brought to Mario’s attention how much more efficient the Haas VF2s are with a pallet shuttle then without. “Our boss loves to buy machines,” tells Mario. “But right away we noticed that we were not getting the most out of the equipment we already had. We see 85-90% spindle run rate on the vertical machines with the pallet shuttles and only 65% on the standard verticals. Same exact machines showing night and day different numbers. Instead of us adding costly new machines we can upgrade the ones we already have by adding more pallet shuttles and get us an easy 20-25% gain in spindle run time. It will save us a ton of money and floor space.”

Mario promised his guys collected data was a carrot and not a stick for punishment. FactoryWiz has shown PNM that many of the areas that need improvement are more geared towards processes and management then the operators. “Seeing me take responsibility for lost spindle time has helped them own up to their idle numbers,” describes Mario. “FactoryWiz has really changed the way we manufacture, but it was a hard sell to our owner. He is of the mindset that if it isn’t cutting chips then it isn’t making us money. Slowly he is coming around and is seeing the value when I run reports. He notices the numbers up on the screen in the shop, and gives a nod of approval to that operator.” It is a win for management, and a win for the operators, but the biggest winner is PNM as a company.

“Our owner is named Dave Counts,” concludes Mario. So “quality counts” is our motto. We work and live by that here at PNM knowing we change lives with every part we machine.”