Climb Right’s rope grab was originally made in China like some of their competitors. Matt began sourcing the parts from American manufacturers until it was 100% made in the USA. Spyder Manufacturing purchased their first CNC mill to keep up with the production needed to supply all their vendors. It is now made 100% inhouse at their plant in Placentia, Ca.

Matthew Monnig of Spyder Manufacturing was born into the landscape business. His family has owned B & M Lawn and Garden Center since the late 70’s. Like everyone with a family business as soon as he was old enough to be useful he was considered an employee. What began as a small lawnmower sales and service shop has flourished over the years to become a preeminent landscape center in the area. They supply tools for the Los Angeles Angels’ grounds crew and even store the clay for the Halo’s pitching mound.

Spyder Manufacturing was opened in the early 90’s as a way for B & M to market their own brand of lawn and garden tools. “We just fell into manufacturing,” tells Matt. “B & M was a distributor, and we would buy and sell different brands of equipment. We would grow a brand and then be cut out by companies selling direct or giving away distributorships to competitors a block away. The best way to avoid this was to market our own brand of equipment. By putting our name on it we had control of where and to whom it was sold. Along with selling product at our own store we set up a network of dealerships to promote and sell our brand.” In the beginning they didn’t manufacture, it was more assembly. They would combine a mixture of the best elements of a tool and put them together into a complete product. So XYZ company made the best fiberglass poles, but ABC’s shovel heads were great. So they combined all the necessary parts to be what we know as a shovel. Their sticker went on it as the house brand of tools.

That changed in 2000 when they purchased an ailing lawn mower manufacturing plant. “The company had some very basic manufacturing tools,” details Matt. “The equipment was antiquated but functional, so we did a little retooling and re-r purposing and began simple manufacturing.” Spyder Manufacturing notice that more and more lawn and garden stores were also selling tree climbing equipment. They saw it first hand at their own retail location. “It was a logical progression for us to add tree climbing equipment into our manufacturing,” describes Matt. “We couldn’t keep product in stock at our store so we branched out so to speak into that market with our Climb Right product line.”

Spyder Manufacturing’s newest mill is a Fryer MC30. It has a smaller work envelope than their other mills so only two pallets fit in the new machine. The MC30 has a new controller giving Matt even more features for his money. Matt takes full advantage of the conversational programming on the controls.

Made in America is a sought after classification even in the world of tree climbing and all of Climb Right’s gear conforms to the applicable international standards. Everything down to the stitching on their harness is manufactured on site. As Matt gained more influence in a management roll he prioritized sourcing as many parts locally as possible. Assembling parts from American manufacturers gained them an edge over competitors. Slowly they began implementing the manufacturing in house. “We don’t cut any corners,” touts Matt. “Even someone not familiar with the industry can see visible differences in our product versus the ones that come from overseas. We took products that were 100% made in China, to only half being made in China, and now those part are 100% USA made right here in So-Cal.” A prime example is their rope grab. It is a small device that the rope goes through and allows climbers to adjust the length of the rope as they move up and down a tree. It is a simple part with an outer casing, a cam system and a bolt. It was that part that led them to purchasing their first CNC mill. 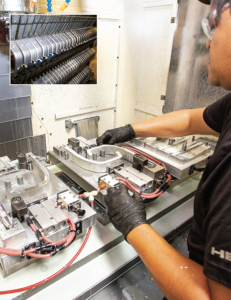 Three of Spyder Manufacturing’s Fryer mills are equipped with three pallet base stations connected to a single air valve. Matt purchased the Pierson Workholding Pro Pallet System to give him the choice of using Pierson’s pallets or making his own. Here you see the Climb Right climbing spikes in production. The spikes are fit two up on the pallets and requires three ops. The operator moves the parts from pallet to pallet to complete the process.

The rope grab alone was costing Spyder Manufacturing 30k a year in machining costs, so Matt began his search for options that gave them the ability to produce it in-house. “It just so happened that a CNC rep walked in my office the day we decided to buy a machine to produce the rope grab,” details Matt. “It was fate, and we purchased a MB10 small tool room style mill from Fryer. It changed our lives. The open style was not great, but we made some covers to contain the mess and starting CNC machining parts. Our eyes were wide open now to the possibilities so we sold that machine and bought a standard Fryer MC40 3 axis mill.” That mill was quickly filled to capacity so Matt added a second MC40 and then a third. “I didn’t have any experience with CNC prior to buying one,” admits Matt. “I learned how to get my drawings into Solid Works from watching YouTube videos and the Internet. Our parts are not super complex and don’t require aerospace level tolerances so after only a few days of training with our first machine I had things figured out. Funny story I actually had swine flue during the training so I only got one full day of training in. Even being dehydrated and on the verge of collapse I picked it up quickly. It was all very logical and just meshed perfectly with how my brain works. I do all the programming and my guys run the machines. The conversational programming on the controls is super handy and I do most of my programming from there.”

Lean manufacturing was a buzzword that Matt wasn’t necessarily familiar with. Spyder Manufacturing utilized similar principles in their assembly processes, but it wasn’t until Matt went in search of faster ways to machine that he discovered pallet systems. “I learned right away that pallet systems are an effective way to increase my production,” tells Matt. “I also learned that for the most part they are also expensive. Pierson Workholding came up in my Internet search and I saw they had a cost effective Mini Pallet System designed for hobbyist and tabletop setups. Then their Pro Pallet System caught my eye. It didn’t cost an arm and a leg and was a way for me to try out a pallet system without a huge investment. So we purchased their pallet hardware kit for one machine. It allows me to connect three pallet bases by chaining them to a single air valve and gives me the option to make my own pallets. I was impressed.”

Matt built a pallet rack that holds more than 100 pallets. Each of his parts has its own pallet so the operator only needs to grab the pallet and the tooling.

Matt outfitted three machines with an identical three-pallet system, allowing him to run any job on any machine by just loading the program. Each pallet is spring powered and only uses air to unlock the pallets so it is failsafe in case air pressure is lost. Spyder Manufacturing just added a fourth Fryer six months ago. The new MC30 has a slightly smaller work envelope so when it came time to buy Pierson Workholding Pro Pallet System for it only two bases were needed. “I have all my jobs setup on pallets and ready to go at any time,” explains Matt. “I built a pallet rack that holds 100 pallets. My guys go over to the rack and get the pallets and the tooling and away they go. We utilize the pallets differently depending on the parts we are running. For example the rope grab is three operations so each pallet is a single op.” They can fit 14 parts on each pallet and run all three ops in a single cycle of the machine. The pallets for that job are loaded and unloaded on the bench by the operator. As the machine is cutting his operator is loading the next set of parts onto pallets. “Taking the pallets off and loading them back in place is super quick and easy,” continues Matt. “Repeatability is 0.0003” or better so they always go back right into place.” The other way Matt utilizes his Pro Pallet System is by leaving the pallets in place and changing out the parts in the machine from one pallet to the next. Their spikes for example are larger than the rope grab so they only get two up on each pallet. It too has three ops, so one op per pallet. The operator then just moves the part down the line of pallets to complete the machining. “The versatility on the Pierson Workholding Pro Pallet System has been great for production,” concludes Matt. “We went into CNC as total novices and finding companies like Pierson Workholding gives us the ability to keep the Made in America tradition alive in an industry flooded with overseas products.”