Peterson Machining – Decades Of Quality On The Front Range 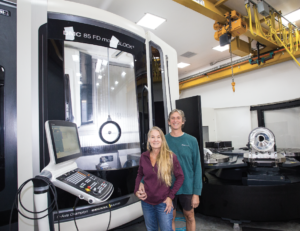 Todd Peterson came to Colorado with a degree in tool and die design and a dream of being a climbing bum for as long as the money held out. Thankfully, he never left, and Peterson Machining is celebrating 30 years of quality on Colorado’s front range.

Todd’s dad is a mechanical engineer and for as long as he can remember Todd has had a wrench in his hand. He still recalls the first time he ever saw a Bridgeport mill. He was belt high and holding his dad’s hand. “I remember being able to walk under the Bridgeport’s table,” describes Todd Peterson, founder of Peterson Machining. “I was enthralled, and manufacturing just stayed with me all these years.” He came west from Iowa to climb mountains and worked at a few local shops before realizing he wanted to start his own shop.  “I was a 26 year- old mountain climbing contract machinist who had no money but wanted to start a company. I read an article saying 9 out of 10 small businesses were funded by loans from relatives and I knew what I had to do. My grandparents were Midwest farmers and in 1989 they loaned me $10,000 to get Peterson Machining up and running here in Boulder, CO.”

With a high density of tech companies, and R & D spurred on by the local universities, Peterson Machining made a name for themselves by delivering tight tolerance complex parts. “We machine mostly aluminum and stainless,” tells Ronda Peterson, CEO and partner at Peterson Machining. “I’ve been with the company 18 years and throughout that time we’ve focused our efforts in aerospace and instrumentation. We had the opportunity to build from prototype to production all the Retul  FIT bike system parts. Retul is now owned by Specialized. One advantage comes in being AS9100 certified and manufacturing parts that require this certification”.

Like Todd and Ronda, everything in the shop is paired perfectly for redundancy. Only two machine tools don’t have a significant other in the entire shop. One of Todd’s first CNC machine tools  was a Fadal in the the original shop space.  Alfred is 26 and Rose at 23 are both 3 axis Fadal machining centers and still holding 10ths (.0001 that is). Petersons look at each machine as an investment and keeps them in top working condition. The 3- axis department also has Clark, a 3 axis pallet system. “Our machines are all named and not just a number,” explains Ronda. “It is a little personal touch that also helps with traceability. The Fadal’s are our oldest machining centers, and they still deliver great parts for us every day. Starting with the pallet system on Clark and moving on to our 5 axis DMG MORI milling centers you’ll see that all our other machines have some sort of automation or increased capabilities. Our Mori Seiki lathes are two spindles, with live tooling and a Y axis. Kentaro is a NL2500 with a gantry robotic arm and 20 station stacker so it is fully automated and can run for a week at a time without us.”

Todd checks an assembly on the LK Altera M CMM. Peterson Machining manufactured all the machined parts on the Assembly. Back from the composite house their customer sent it back to Peterson for final verification. Because of the large capacity, Renishaw PH10 head, and selection of probes and Nikon scanner, Peterson Machining is able to expand their contract inspection services. No one on the front range they know of has the size and sophistication of the LK Altera CMM.

Peterson Machining leaped into 5 axis manufacturing in 2010 when they purchased EVE-A, a DMG MORI- DMU 65 monoBLOCK. EVE-A’s footprint is actually small for a 5- axis machine that weighs in at 22,000lbs, but the work envelope is quite large. With 60 tools, an 18,000 RPM spindle and onboard touch probe to measure parts in process, it was no wonder that Petersons added an identical machine soon after. “It took us a while before we pulled the trigger on a 5th axis,” tells Ronda. “We did our homework and feel the DMG MORI brand is the best of the best, delivering the accuracy and speed we need. We wanted to up our game even more and in January 2018 we ordered our biggest DMG MORI. A DMC 85FD RS6. We named her Theia after a Titan goddess, she was a 14 month build and worth the wait.” Theia is a 5- axis palletized mill-turn machining center with a 20,000 RPM spindle, 120 tools and can run a part up to a meter in size. The pallets for turning can run at 800RPM making this a truly versatile machine. It was delivered over the summer and Todd and Steve, their lead machinist are both learning the ins and outs and what she is fully capable of. “Steve is a milling guy and Todd runs the lathe department, but since it is a mill-turn they have to share,” jokes Ronda. Peterson Machining is working closely with the Germans from DMG to fine tune features and options that are unique to this machine. “In simple terms the MPC is crazy intelligent,” explains Todd. “It senses everything through the spindle down to flaking a corner off one flute of an end mill. This is as close as I have ever seen to a machine having a “feel” for what’s happening. It also has preventative maintenance protocols that track wearing items on the machine itself.”

Fourteen months is a long time to wait, but it gave the Petersons time to prepare.

They quickly realized that even with all their redundancy on machine tools they still only had one CMM. Ruby, a Starrett CMM with a Renishaw PH9 DCC automated probing head does a great job, yet she has a standard size table, and nowhere near the work envelope needed to support parts off the new DMG. While the DMC 85FD RS6 was on order they built a new inspection room and added a LK Altera M CMM. The room itself has a barn door so a forklift can be used to load parts on and off the LK CMM table. The large table not only allows for measurement of big parts, but also many parts. It is not uncommon for Todd to have a handful of parts set up for verification all at the same time. The 40x50x60 size gives them a great amount of flexibility.

The LK Altera M CMM is appropriately named Vision, because it sees everything. It has 14 different styli, a Renishaw PH10MQ DCC head and also a Nikon scanning system. Todd and Ronda did their research before heading off to IMTS to see in person all the different manufacturer’s CMM offerings. Their criteria were pretty simple, it had to be accurate, it had to be large enough to handle a part a meter in size, easy to use software, and most importantly supported by a great service team. “In this business a machine is only as good as the service you receive post sale,” tells Todd. “Once you get to a certain level of CMM, they are all similar, so company background and service becomes more of a standout. LK has a long-standing reputation of being fantastic, and Scott Collier of LK Metrology is one of those reasons. Scott came out and toured our shop, saw what we do, and made a recommendation off that. He delivered on everything we wanted and Vision has been a great new asset.” 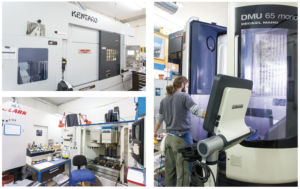 Top Left – Peterson Machining’s turning department has a pair of Mori Seiki two spindle lathes with live tooling and Y axis. Kentaro is equipped with a gantry robotic arm and a 20 station stacker, allowing for lights out manufacturing. Bottom Left – Clark, 3 Axis palletized Brother CNC is one of only two machine tools in the shop that doesn’t have a partner. He is grouped in with a pair of Fadal 3 axis mills. Right – Steve works on MAX, one of two DMG MORI DMU 65 monoBLOCK 5 axis mills. The DMU has a small footprint, but the work envelope is quite large. They have a 60 tool capacity and 18,000 RPM spindles.

Peterson’s manufacturing team are well versed in CMM Manager, it runs on Ruby and also on Vision. “It was important to us to keep using CMM Manager,” explains Todd. “For a job shop like us it is perfect. We don’t know exactly what it is we are going to inspect on a daily basis, so CMM Manager gives us a lot of flexibility without sacrificing capabilities. Because the CMMs are automated our machinists can come in with a part, call up the program, and have it run the inspection unattended. We are in a constant state of checking parts, and automation is a big part of our efficiency. LK’s relationship with Renishaw was another selling point for us. As early adopters of the automated probe head, and direct collaboration between LK and Renishaw we know that we are getting fast and accurate readings. Speed on larger sized parts becomes more important, especially when you are measuring a lot of points. The difference can be hours faster than a slower machine.”

As an AS9100 certified shop validating accuracy is a part of the process. Having properly calibrated CMMs are key. For Todd and Ronda, having the same person calibrate both the LK and the Starrett was important to them. “Alex, from LK takes care of both our machines so they are always in top working condition,” explains Ronda. “LK CMMs come with an industry leading 10- year warranty, but the Starrett is older, and not their brand, and yet they still support us by calibrating it along with their own product. It is that kind of support that is really appreciated and valued.”

Peterson Machining has nine employees, a shop dog, and over 8,000 sq.ft. of space, not exactly the Everest of specs, but pretty typical for a smaller job shop in the area. The quality and technology they house though blows everyone else off the mountain. Todd and Ronda are not afraid to go full send when investing in the business’s future. By partnering with companies like DMG MORI and LK Metrology, Peterson Machining knows they will take the best line, get over the crux, and summit first in quality.