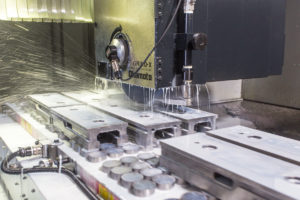 Eric Sun is the owner and president of Orange Vise Company in Placentia, Ca. After graduating college in 2005 with a computer science degree, he worked in several machine shops, including one in his garage, before starting Orange Vise in 2012. “I didn’t always set out with vises specifically in mind,” describes Eric. “I knew I didn’t want to sit in front of a computer all day and doing something more hands on seemed the way to go. I started manufacturing other machinery before seeing potential and opportunity in the vise market.”

Eric and his team specialize in manufacturing CNC workholding devices. They’ve taken an age-old product and maximized the concept for a modern world. Eric thought that many manufacturers’ vises lack continuity between products, and they seemed to treat each vise as its own thing. He also noted how he felt there was room for improvement in quick-change abilities, both in jaws and in locating systems. “We wanted to pull quick change together with future proof continuity,” describes Eric. “Our vises are from top to bottom quick change. Everything from the jaws to how it mounts to the table is designed to be quick and repeatable.” Eric understands that not everyone has a giant pallet pool with dedicated fixtures and that flexibility is important. He also knows that the side effect of flexibility is there are more places to collect unwanted chips. “Chip covers and guards are pretty much industry standard,” explains Eric. “But it can be a problem if all they do is block the larger chips and let the fine ones get in to jam up the mechanisms.  We designed the Orange Vise quick-change system with that  problem in mind. The only way to keep a vise clean is to clean it, so our Orange Vise products completely disassemble in under a minute.” They added evacuation ports and slots in certain locations so when it is sitting in the machine you can use a coolant gun or an air gun to blow everything out. The entire vise then comes apart and reassembles quickly, easily, and repeatably. “In the beginning those features set us apart,” continues Eric. “Five years later we continue evolving as a company and expanding on those  features.”

Orange Vise has a variety of standard and custom sizes on offer. Their smallest vise is 4.5”x12” and their largest is 6”x26”, but all share interchangeable parts and continuity. “Our vises have the exact same heights and depths,” details Eric. “We kept everything uniform so everything can be used together. You can use our 4.5” vise right next to our 6” vise and span a single part between any of our products.” The only difference is the capacity based on the length of the vise. Their 6”x17.5” vise is one of their most popular items. It was designed specifically for users of 30”x16” vertical machining centers like the Haas VF2. “Virtually every manufacturer has a 30”x16” vertical machine,” tells Eric. “We offer vises, and turn key kits that are made for this popular size machining center.”

Okamoto has grinders as small as 6”x18” and all the way up to 32”x140” in their double column series. Orange Vise purchased the smallest of the double column series with a working area of 32”x80”. A double column is similar to a gantry bridge type milling machine, but in a grinder. What it boils down to is significant Y-axis travel and rigidity. Rigidity increases accuracy throughout the entire range of travel. Parallelism is important to vises and Orange Vise predictably grind 9-12 vises on the table at a time without any discrepancies in heights from one corner of the table to the opposite corner.

Each vise is manufactured in Placentia, Ca. out of cast iron and steel. Orange Vise uses a continuous cast iron bar from a company based out of Chicago as their starting point. It gets roughed in on their Doosan vertical mill before being sent out for heat-treating. When it returns, it heads to the DMG MORI horizontals for two operations and machining on all six sides, leaving no visible raw casting. Some go out for black oxide coating before being put on the Okamoto grinder for precision flattening and squaring. After grinding they are cleaned, oiled, assembled and packed for customer delivery all right here in the USA.

Orange Vise has been in the process of upgrading equipment since moving into their now overflowing 7200 sq.ft. manufacturing facility. Their latest upgrade is an Okamoto Grind X CNC grinder purchased through local So-Cal dealer Machinery Sales Co. It was installed late last year, and was the final piece in the manufacturing puzzle that Eric needed to ramp up production. “Our original priority was making sure we had updated machining equipment,” explains Eric. “We added to our milling and turning capabilities first before upgrading our grinder.” Orange Vise uses a combination of DMG MORI horizontals and lathes, a Doosan vertical and a Brother M140X1 multi-tasking machine. Milling was initially their largest holdup so they significantly increased their milling capabilities with a fairly large horizontal milling center. “With the added milling capacities grinding became the final bottleneck for us,” details Eric. “We started out with a 16”x32” Taiwanese grinder, but knew we wanted something larger, faster and more accurate eventually. There are fewer players in the market offering quality CNC grinders than say in mills or lathes. We like that Okamoto is from Japan. Their quality and reputation drove us to them.” 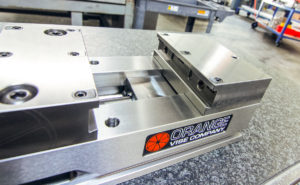 Okamoto has grinders as small as 6”x18” and all the way up to 32”x140” in their double column series. Orange Vise purchased the smallest of the double column series with a working area of 32”x80”. “The double column was important to us for a few reasons,” tells Eric. “A double column is similar to a gantry bridge type milling machine, but in a grinder. What it boils down to is significant Y-axis travel and rigidity. Rigidity increases accuracy throughout the entire range of travel. Parallelism is important and we can predictably grind our vises. We might have 9-12 vises on the table at a time and we don’t want any discrepancies in heights from one corner of the table to the opposite corner. The double column gives us a lot of confidence. Buying multiple smaller machines was an option but we went with the larger version not only for capacity but also for future capabilities. It just made more sense to us.” Orange Vise can grind plates up to the full size of 32”x80” table, giving them ability to make quick-change subplates their vises mount to. “If a customer buys a new machine they can then order a complete kit that includes the vises and the subplate. Customers don’t have to do any homework, they are ready to go. Instead of taking hours to change out vises they can do it in minutes. This wouldn’t be as easy without the capabilities of our Okamoto grinder.” 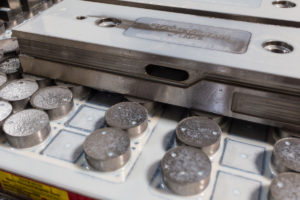 Instead of using a standard grinding chuck Orange vise went with a milling chuck from Techniks. They chose that instead of a traditional grinding chuck because the surface is replaceable. A grinding chuck of this size would be worn out after a few hundred times leveling the table and would cost almost 50k. In contrast the milling chuck surface blocks can be replaced for about $1000. “Because they are common steel and replaceable we can flatten that table as many times as we want,” Explains Eric. “Because cost is out of the equation we flatten our table constantly. Instead of relying on operator discretion, it is a blanket protocol to dress the table every time.”

The first aspect of the Okamoto was to relieve the production bottleneck, but Orange Vise also made a large step up their quality and precision. “Customers often ask how closely matched the bed heights on our vises,” expands Eric.  “For us, the priority is getting them flat and not just hitting some nominal dimension. That being said, it just so happens that we are also hitting nominal dimension. A large part of that is because of the Okamoto.” The new grinder has far more automation than the grinder they had before, allowing for less human interaction to produce the desired results. An example would be the Okamoto will flatten the table then auto compensate for the new height. “Because we can rely on it holding a tight tolerance we have a zero percent reject rate,” brags Eric. “Our reject spec is +/- 5 tenths and the Okamoto holds +/- 2 with minimal effort. We are really pleased with our purchase. Because the Okamoto is a specialized machine, install was done by the factory, but service and support from Machinery Sales Co. has been awesome. Garry Frost and his team have been a pleasure to work with. So much so that we will look at the line of Kitamuras when it comes time to add more milling centers to our operation.”

Orange Vise is blossoming, and already looking towards future expansion. They are in a hiring phase right now, and hope to triple their square footage in the next twelve months. “We are in a constant state of evolution,” continues Eric. “Though trial and error and customer feedback we are delivering what I feel is a better and better product. Some people cringe at warranty issues, but we don’t. We like when a customer voices their concerns, instead of giving up and buying a competitor’s vise. We learn a lot from out customers and value their input.” Orange Vise’s products have advanced over time, but the basic dimensions have remained the same. Customers can trust their vise investment is future-proof. Any new features Eric and Orange Vise add down the road can be retrofit to an older product. “Our customers will never be left with an obsolete vise,” concludes Eric. “We know the value of repeatability and repeat customers.”