MONOGRAM AEROSPACE FASTENERS – One and done with a sea of Tsugamis 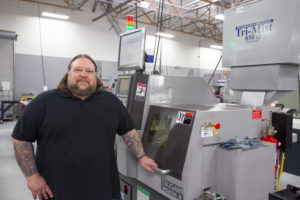 Monogram Aerospace Fasteners has over a century of manufacturing knowhow in a very niche market. Their Phoenix, Arizona plant turns out almost a million parts a month thanks to 21 Tsugami Swiss machining centers and Tim Radziwill’s one and done mentality.

Monogram Aerospace Fasteners is a well- respected industry name, and has been for more than 100 years. They started out manufacturing bolts and nuts, and over the years transitioned to a world leader in aerospace fasteners. Monogram’s headquarters is in Commerce, California with a staff of well over 300 people. The Phoenix facility came on line in 2012 to support a specific line of products. “The cost of doing business is less here in Phoenix than in Commerce, Ca.,” explains Tim Radziwill, plant operations manager at Monogram Aerospace Fasteners’, Phoenix manufacturing center. “So corporate set up this 14,000 sq.ft. building to support a new line of fasteners. It was just an empty warehouse, a single Tsugami BE20 machine, and me. I was tasked with getting the first family of parts qualified through Boeing. It was a CT Collar in 3-2.5 titanium.” Everything produced in Phoenix is for Boeing and their distributors, and everything they manufacture holds the composites together on a plane. The 787 literally has millions of their parts on them. Everything has to be approved by Boeing and each family of product needs to qualify to be added to the drawing. “We make only two styles of parts,” details Tim. “We have a single component swage fastener and a frangible type fastener. Of those two styles we have 10 families of parts, with 4 or 5 parts per family. In mid 2013 we got our first qualification so we had something to run. It was a life changer. I have never been so happy to see a machine start running production parts in my life. We plucked away at the other families until we got to the 10 families we have now.”

Tim’s manufacturing career has come full circle. It started nearly twenty years ago in Arizona before heading back to Minnesota and making it a career. “I was jamming in bands when my first son was born,” tells Tim. “I needed a trade at that point in my life so I got a job here in Arizona machining parts for the piercing and tattoo industries.” Tim moved back to Minnesota and found work at mom and pop type places before landing at larger companies doing complex aerospace parts in super alloys like Hastelloy, Iconel, and 347. “Some guys just have that thing that suits them for this line of work,” adds Tim. “I’m lucky to have a knack and to have learned from talented people. A year into my new career I was writing programs and setting up machines.” Tim credits being a drummer for his ability to look at a drawing and see in his head how it needs to be made. “Drummers are unusual and maybe I visualize differently than others. I love seeing a print and bringing that part to life.” 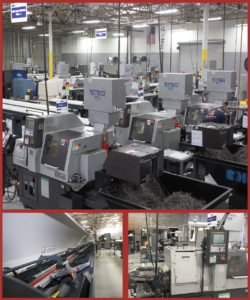 Tim started with only a single Tsugami BO20 machine and now has 21 Tsunami BO205 5 axis machines with 14 tools, live tooling and 10,000 RPM spindles. Bottom left – Most of the machines are equipped with LNS bar feeding system. Bottom right – A handful of the Tsugamis utilize a custom bowl feeder, which vibrates parts down a track before a gripper places them in the chuck.

Just five years ago Monogram had only one man, and one machine. Now the shop is at capacity running 24 hours a day, six days a week on 21 Tsugami Swiss machining centers. Twenty-two employees run three shifts and more expansion is on the way. “We are maxed out on space, maxed out on power and maxed out on machine capacity,” explains Tim. “End of last year I added 6 more Tsugami BO205s and I’m maxed. We have 7,000sq.ft. available next door that can handle 10 more machining centers. We run manned shifts on all our more difficult materials but lights out on the titanium parts. All the machines are equipped with fire suppression systems so there is no worry of catastrophic events happening while we are gone.” Tim and his crew produce an impressive 20,000-40,000 parts a day depending on size and material. On average 750,00 parts are manufactured and delivered each and every month.

All of Monogram’s Tsugami Swiss machining centers are purchased brand new and are identical to keep things simple. Twenty-one BO205 5 axis machines line the floor. Each is equipped with 14 tools, live tooling, 10,000 RPM spindles and Fanuc controls. The only difference is some might be configured differently depending on what was available at the time of purchase. The majority of machines have LNS bar feeders, but four utilize a custom bowl feed system. “The bowl feed systems vibrate the forged parts down a track before being grabbed by a gripper and placed in a 3 jaw chuck,” describes Tim “The arm moves in front of the spindle and then loads the forging. Our California plant utilizes a similar setup but has a robot doing the loading.”

Arizona CNC, which is the Tsugami distributor, has been a key member of the support team since Monogram Aerospace Fasteners opened the Phoenix location in 2012. They are Tim’s go to for support and service on the Tsugamis. “We work directly with Tsugami and Arizona CNC,” explains Tim. “Originally we were getting machines shipped out of California and having Arizona CNC handle all the service and support. Not long after I came on board we began to buy directly from Arizona CNC. We get great pricing from Arizona CNC and they are just a good core group of people. Jeff Curry is our sales guy and he takes fantastic care of us. Last year we purchased six machines and ten bar feeders from him and felt good about it. They have supported us all the way. Greg Whalen over there is awesome to deal with. Tsugami as a whole is supportive starting with REM Sales and Arizona CNC. You can tell a lot about a company by their support. It doesn’t matter if you haven’t bought a new machine in five years you hit up one of their application guys and they are happy to help. Other brands I’ve dealt with over the years don’t have the same level of service.”

One and done is the way Tim likes to do things. Loading the bar, machining the part, and dropping the finished piece as quickly as possible is the way Monogram can produce as many fasteners as they do. They’ve experimented with a few different options, but in the end came back round to one and done on the Tsugamis. “We’ve bought everything from a million dollar multi spindle to part mark machines and trim presses trying to cut cycle time,” explains Tim. “In the end my sea of Tsugamis deliver better results with only a slight increase in cycle time. We were so far behind that I added the latest 6 machines to make up for the missing production. In theory a multi spindle sounds like a great idea, but if it isn’t cutting that is six spindles that are not running. If one of my new Tsugamis goes down I still have five other spindles still turning, and I know Arizona CNC will be out immediately to remedy my situation. Mass production means one and done. We live by that here.” 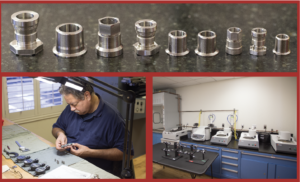 Monogram’s Phoenix location only produces two type of fasteners. They have 10 families of parts with 4-5 parts per family.
Bottom left – Mar Urquiza knows quality is critical at Monogram, a single defect requires sorting of the entire 25,000 piece lot.
Bottom right – The lab was installed to perform micros on threads and to look at material under 500 power magnification.

To go from a big zero and one machine to 9 million in sales in five years is quite a feat, and one Tim could not have accomplished without his team. When the work began to flow he needed more people to run the machines. Corporate put an ad out looking for Swiss operators and he got random people that didn’t fit the bill, and no one had Swiss experience. I trained everyone in the shop,” explains Tim. “I had to educate and build the team I have. No one had run a Swiss machine before. They didn’t understand the guide bushing and the Z axis at first, but now we are rolling.” When Tim started in the industry he had to beg and plead for knowledge. People were less open about sharing the tricks of the trade. He didn’t want that kind of closed off attitude on his shop floor. “My 20 years of experience is there for anyone to absorb and pull from,” concludes Tim. “I’m not worried about someone taking my job because I teach what I know. We are productive because we share our information and knowledge. My team is skilled, and it makes for a better work place. If there is a problem we get together as a team to find a solution. It is an open dialog situation here and we are proud of the work we do. Everyone one of us takes pride in knowing that are parts travel all over the globe. Those planes carry us, our families, and your family. We know what’s at stake and that motivates us.”