After spending a decade working for a screw machine shop in Yucaipa, CA. Barry Kitchen set out on his own, opening Fast Lane Precision in 2001. “We began as a Swiss turning shop because that was what I knew how to do,” tells Barry. “I still love the screw machines, but to better service my customers we have added 5 axis milling, traditional turning and mill turn machines. Customers were asking for parts that were either too big for our Citizens or they wanted a square part. I got an old mill and an old lathe to test the waters, but found that I really liked the added capabilities. We began adding new state of the art milling and turning machines. The Swiss guy in me likes parts coming off the machines finished so we have multiple 5 axis Haas mills, a couple 4 axis Haas mills and a Doosan Puma TT mill-turn lathe to go along with our eleven Citizen screw machines.” 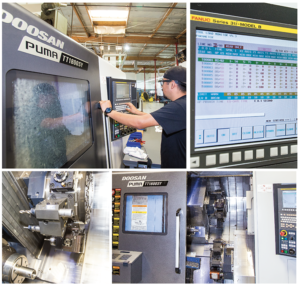 “The Puma TT is such a fun machine,” tells Kevin. “I know fun isn’t a word normally associated with a machine tool, but man I have fun at work. It is a challenge every day and that’s fun for me. I don’t want to do the same thing day after day after day and go home wondering what it was I actually did. I come to work and look forward to what we can make on the Doosan Puma TT and how we can make it faster or better. I am constantly learning, and building off that new knowledge. What else can it do is a daily question that we try to answer. The tool loader for example measures the load on every single tool. If one tool goes higher than the load I determined the machine will stop. It avoids a broken tool, it avoids a crash it avoids bad parts. That’s power, that’s fun. So many people don’t even use that feature because it is more complicated, but once you get it is it one of the most useful features on the machine. With all the automation we run the Doosan lights out almost every night.”

Fast Lane Precision in Riverside, CA. is a do it all shop geared towards aerospace and defense. From tiny fasteners to full assemblies they take it to the limit. The more difficult the part, the more they like it. “We thrive on the materials other shops hate,” explains Barry. “We run a lot of exotic material like Inconel and A286 along with more traditional metals like titanium, brass, aluminum, plastics, and stainless.” A286 is a favorite go to material for aerospace engineers designing fasteners with threads. Fast Lane Precision machines tens of thousands of A286 fasteners for the aerospace industry every year; it is one of their specialties. “When I invest in new machine tools they have to be up to the task at hand,” continues Barry. “I rely on trusted brands that built their reputations on service and support. Inconel and A286 are difficult to machine, so when Ken Bennett of Ellison Technologies began to talk up the Doosan PumaTT1800SY mill-turn I listened. I wanted a machine that would deliver a finished part and give me the ability to run a larger diameter than we could on the Swiss. The Puma is a dual turret, twin spindle machine with 7 axis and can run 2.6” bar all day long. It fit the bill nicely. This was our first machine tool purchase from Ellison. They are well regarded in the industry for their service and we’ve found that to be true. They are organized and quick to respond. The techs get in and out when you need them and don’t sit around milking the clock on my dime. I like that. Ken was easy to deal with and is the running to get another sale when we add to the mill-turn department later in the year.”

Admittedly, Fast Lane wasn’t utilizing the Doosan to its full potential. That changed when they hired Kevin Jimenez, a Doosan mill-turn specialist. Kevin has been with Fast Lane now 8 months and has completely taken over the turning department, freeing Barry up to focus his efforts elsewhere. “Kevin has been a great fit,” touts Barry. “He is young, smart, driven and is always learning. He pushes his programming to extract every ounce of performance and automation from the Doosan.”

“I like to say that Barry loves money,” jokes Kevin. “But what I mean is Barry loves seeing automated processes, and finished parts coming off the machine with a minimal amount of human contact. Simultaneous running on the Doosan is like dollar signs flying off the machine and into the bank.” The Doosan PUMA TT1800 series machine is a horizontal multi-turret turning center designed with automation in mind. It has a bar capacity of 2.6” and is equipped with twin opposed spindles and upper / lower turrets. The left and right spindles can process work pieces independently or simultaneously to maximize productivity. Each spindle is equipped with an independent part catcher and unloading system for automated manufacturing. “There are so many features on the Doosan that I utilize every day,” tells Kevin. “Lets just talk turrets and spindles. They are key elements that make this such a popular machine.”

Having twin turrets obviously offers you twice the tooling of a single turret style machine, but the Doosan’s tooling is half indexed, essentially doubling the available tooling yet again. “We have 24 tools on the top and 24 tools on the bottom at our disposal,” explains Kevin. “It is a lot of tooling, but on some jobs you need every bit of those capabilities. With all the available tools on the two turrets it is nice to be able to keep a variety of popular tools always loaded and ready to go. We have a few standard tooling items we utilize and they are pretty much always locked, loaded and ready to cut chips.” A typical run quantity on the Doosan is between 800 and 2000 parts. Not running onesie-twosie allows Kevin to dial in the performance of the Doosan through programming and tooling. “On a longer run you can see how one tool performs better than another and figure out a strategy to maximize production,” explains Kevin. “I can see right away if buying a better tool makes a difference or if a lower cost one lasts and performs just as well. In automation tooling is very important. We almost exclusively use Sumitomo for our turning inserts and parting off inserts, in milling we use a lot of Cobra Carbide and SGS.”

The twin spindle Doosan is exactly that, a twin spindle. Two identical spindles are neatly tucked inside the machine ready to tackle jobs in various ways. “The

Barry Kitchen opened Fast Lane Precision as a Swiss turning house in 2001. Over the years they have added automated milling and turning to support their customers, but he is still a Swiss guy through and through. The Swiss department is made up of 11 Citizen machines ranging in size from the L12 to the L20.

Doosan Puma is two machines in one,” touts Kevin. “The two matched spindles can run independently of each other or in unison. Both are an actual rigid spindle and not a spindle and sub spindle. Anything I can run on one spindle I can run on the other. This gives me great flexibility when it comes to programming and I don’t have to worry if a sub spindle is up to the task.”   Kevin programs the Doosan to share the workload in the most efficient manner. Sometimes that is looking at it as two separate machines and other times as one super machine. “Anytime both spindles are cutting parts at the same time the profitability is maximized,” describes Kevin. “You can see by our parts that the ability to run off either spindle and to cut with either turret is a big advantage over traditional turning. The part we have on the machine right now takes us 4 minutes. In comparison on a live tool, y-axis, sub spindle machine it would take 8 minutes. It needs two lathe ops and two mill ops, or one pass through our Doosan. With simultaneous running we drop a finished part in under 4 minutes. We clean it, pack it, and ship it right to the customer. Splitting the part exactly in half is an art form that really yields results. 50-50 is critical to making money and as we continue to add parts to the Doosan that aspect of machining is one of the first things we prioritize.”

In the long run, lights out manufacturing gives Barry a peaceful easy feeling. The automation built into the Doosan fit right in to Fast Lane’s Swiss turning mentality. The combination of experience and ideas spread throughout the departments means no one is the last line of defense. It is a team effort though and through. “The knowledge base is incredible here at Fast Lane,” concludes Kevin. “Coming from a huge corporate shop to a mom and pop place has been a big change, but one that I welcomed. I have more freedom here to experiment and improve work processes. If I want to reprogram a part to save us time, Barry says go for it, and I do. That is the great thing about the Doosan Puma is that the more I learn the faster it gets. Here at Fast Lane it is all about automation. Start to finish the Doosan is my baby and anything we can do to increase profits and reduce costs is encouraged. That is why Barry got the Doosan in the first place. It is like having two machines in one.”