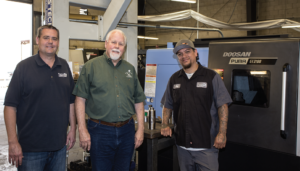 The oil business has its ups and downs and it’s no secret that Bakersfield, Ca. knows this better than most. Kern County is a large producer of oil in the USA and for nearly four decades Swaim & Sons Manufacturing has been down hole with them. Oil pumps are what they do well, pun intended.

After ten years working for a local pump company Bill Swaim saw a need for an independently owned sucker rod manufacturer in Bakersfield, Ca. In 1979, at the ripe age of 30 he opened Swaim Machine Shop to service the area’s top industry, oil. “Haven’t been in business as long as there has been oil in Bakersfield, but this October will be 40 years.” jokes Bill Swaim. “When you see pumping units going up and down, at the bottom of that rod is the pumping unit. Bottom hole pump parts are what we do best. In forty years of business we still make the same part pumps that have been around since the 30’s. We’ve been to the moon and back and these pump systems have remained pretty much the same.” Materials have changed and the machines used to manufacture the pump parts have grown more sophisticated, but in essence the pumps have remained mostly unchanged. The pumps just work and always have. The biggest revolution to the Bakersfield oil industry has come from fracking and steam enhancement. The oil in Bakersfield is tar like, so without new ways to harvest it the field would have dried up decades ago. Refineries bring in hundreds of railroad cars of oil from North Dakota to mix with it to make it useable. At the end of the day it still needs to be pumped from the ground.

There are not a lot of API certified companies left in the USA manufacturing pumps and pump parts, but for 40 years Swaim & Sons still resides on the list.

“Kern County is 3rd in the nation in oil production so we have a lot of local customers, but the reality is that there are very few of us left in the business so we’ve become more of a global supplier.” adds Lance Swaim, salesman and son in the Swaims & Sons. “We have an online ordering system that notifies sales, production and management of a sale.” Swaim & Sons sell directly to consumers as well as to manufacturers so customer service is two -fold. Once the order is placed online the warehouse determines if it is in stock or on backorder. If the part is in stock it gets processed and shipped out to the customer. If inventory is low then production schedules another run of parts. Typically the minimum run will be based off utilizing a whole piece of bar stock. “The customer is kept in the loop the entire time,” tells Lance. “We have an extensive amount of inventory on hand to best service our customers. Production stays ahead of the demand on the popular items so we just pull the part off the shelf to complete the sale.”

Swaim & Sons occupies two buildings totaling 17,000sq.ft. A staff of 13 work a single shift on sixteen CNC turning and milling centers. “We work primarily in C1215, 8620, 304 stainless, brass, monel, inconel and so forth,” details quality manger Mike Aguirre. “We churn out 70,000 parts a year that range in size from small to mid size. Guys work in cells running at least two machines at a time. We have four dedicated setup people and the rest are operators.” Mike has been with the company since 2001 and started out part time in the shop as a laborer. He worked his way through the ranks to become the quality manager a few years ago. “I took a good manufacturing person that made the company money and dropped him in an office,” jokes Bill. “You can tell he misses working in the shop, but he is doing a great job for us in quality.” Mike is responsible for checking all of Swaim & Sons parts and maintaining their API, Q1 and ISO certifications. As one of the few American Petroleum Institute licensed manufacturers, maintaining the API calibrated gauges is a daunting task. “Most everything we machine has thread,” details Mike. “Each of those threads match our set of shop calibrated gauges and then again the set in QC. Without the double verification process the parts don’t get put into circulation.”

Swaim & Sons have a shop full of CNC machining centers, 16 in all. Most of the turning machines are Doosan lathes, but they also have a Mori Seiki lathe with dual spindles and live tooling. The milling department consists of three Haas mills that vary in size.

Swaim & Sons has always been tech forward. Back in the day they were a Wasino shop, but over the last decade or so Doosan has become the machine tool of choice. “I try and keep up with new equipment,” explains Bill. “Most of our 16 machines were purchased in the last five years. We love the reliability of the Doosans. If the guys didn’t crash them now and then they’d be perfect.” Swaim & Sons’ manufacturing area is filled with Doosan lathes that vary in size and capabilities. “We have a dozen Doosan lathes, one Mori Seiki lathe and three Haas mills,” adds Mike. “Most of our lathes have live tooling and/or secondary spindles, but our two newest Doosan machines are simple turning centers. All we needed was a lathe that could run 3” to 5” bar all day, every day, and we got it from Dooson Puma GT3100.” 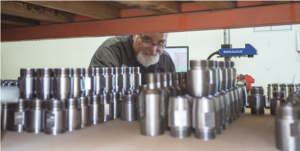 Scott Taylor has been with Swaim & Sons for 35+ years. He manages all the inventory of materials and finished parts. Swaim & Sons have over a million dollars of inventory ready for online sales.

Swaim & Sons recently began their relationship with Ellison Technologies, who is the current Doosan distributor for Bakersfield. “It had been a few years since we added new machines, and the Doosan distributorship has changed hands since then,” explains Bill. “We needed parts and the old distributor Protec was kind enough to put us in contact with Ellison. I’d paid off a couple other machines and decided to invest in two more Doosan lathes and called Chad Turner over at Ellison.” The two new Doosan Puma GT3100 lathes were installed in April and immediately blended right into the shop’s workflow. “We love the Fanuc controls on the Doosans,” tells Mike. “Most of our turning centers having the same controls it makes the programs almost universal.’ With a few edits Swaim & Sons can interchange machines to run parts without much fuss. All the operators can use the controls so they can move freely between all of the Doosan machines. The new Doosan Puma GT3100s are setup as mirror images. Throughout the shop tool #1 is the same in all the machines. “It gives us the flexibility to move parts around depending on our need and vacancy of machines,” describes Mike.

The industry goes up and down just like the oil derrick, but with experience comes wisdom. Swaim & Sons has persevered through good and bad with out of the box thinking for day-to-day operations. “We are survivors in a volatile industry,” tells Bill. “We always have been and always will be.” Creative solutions have come in a variety of forms. Sometimes the answer lies with your accountant explaining how you can write off outdated inventory and other days it is finding untraditional ways to buy materials. “We contracted with a rarely used vendor to bring in bundles of bar stock on consignment,” continues Bill. “We have 8 or 10 bundles out there right now that we don’t pay for until we break the bundle. It is a huge cost saver and time savor for us. We email them that we used the material and they invoice us for it and ship us another replacement. It is a great system.” On their exotic materials they now go directly to the factory for the best pricing and delivery times. The steel market is volatile right now and price estimates might be good for only a few hours. Bill and his team have been stocking up on materials to help mitigate the price fluctuations as well as aiming their efforts at the higher priced specialty parts.

“When I started the business in 1979 there were nearly twenty major manufactures of pumps and pump parts in the USA,” concludes Bill. “Now there are five of us. Staying on top of technology has helped us over the years. We were early adopters of computers and CNC machines. I might look like an old man now, but I was young once and I saw the value technology could bring with it.”