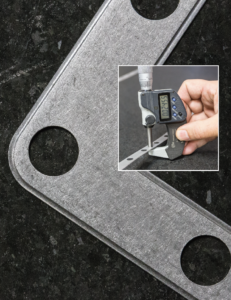 Martindale Manufacturing specializes in aerospace components, specifically mechanical seals that go on anything that flies. Size range is 1”x1” to 4’x4’, but most parts are the size of an iPad. Thickness in material varies, but ranges from .025 to .125. Tony describes the process as machining sheet metal. Once finished the part is sent to a second process where rubber will be molded into the grooves that were just machined.

Tony Martindale has been in manufacturing his whole life. After college he worked at the NUMMI plant in Fremont, Ca. NUMMI was the joint venture between Toyota and GM, after the NUMMI plant closed it re-opened to manufacture Tesla Vehicles. He moved from there over to Cisco, but always wanted to own his own business. “I have a degree in industrial technology with a Master’s in New Business Ventures and Startup’s,” tells Tony Martindale, owner of San Marcos, Ca. based Martindale Manufacturing. “The goal was always to have my name on the door of a manufacturing business, but when I began my search it wasn’t aimed specifically as CNC machining.” Tony came across a business that was for sale in San Diego County. It met all his requirements and just happened to be a CNC machine shop. “The previous owner was set to retire after being in business for almost two decades,” explains Tony. “The company was tiny and profitable and came turn key, so my wife and I sold our house in the Bay Area and headed south to begin Martindale Manufacturing.” Sunny San Diego sells itself, and 15 years later Martindale Manufacturing is thriving in their So-Cal location.

Eddie Gonzalez is the production manager. Every job comes in to him. He cuts the material, stages the job with the fixture and tooling so it is ready to go on a machine. The job is handed off to the operator who completes the machining process. The part goes to finishing where it will be deburred before it goes to final inspection and on to shipping.

AS9100 certified Martindale Manufacturing mills aerospace components, specifically seals that go on planes, helicopters and rockets. They have hundreds of part numbers for numerous customers, but all the parts share similar characteristics. The parts are a thin flat metal carrier that the customers mold rubber to creating a seal. “Think machining sheet metal and that’s what we do,” explains Tony. “Sounds kinda weird, but the metal is so thin that we have to make custom vacuum fixtures to hold the material in place.” Thickness in material varies, but ranges from .025 to .125. Some of the pieces are made from stainless or titanium, but 90% of parts machined by Martindale Manufacturing are made from various flavors of aluminum. After the grooves are cut, they machine out the part’s final shape. It then gets deburred and maybe part marking or anodized before being sent our customers. “Most of our parts are a connection point where hoses might come together,” details Tony. “Our parts go on commercial, military, planes, helicopters, missiles and even get launched into space. Where ever you need a seal on something that flies. We have no set sizes or quantities. It could be one or it could be fifty, but rarely is it more that a few hundred.” Sizing too varies by customer and application. It is not uncommon for Martindale Manufacturing to have a 1”x1” running on a Fadal 4020 while a 4’x4’ carrier is being machined on the Fadal 6030.

When Tony bought the company in 2003 it came with five older style Fadal milling centers crammed randomly into the warehouse. He has reconfigured the layout multiple times since then, always looking for a leaner and cleaner way to manufacture. “We now have 8 machines and 20 employees,” tells Tony. “Fitting all that into our building in an efficient way is daunting. We are in the process of building out a new office area and expanding the manufacturing footprint for better workflow. We should be able to add one or two more Fadal mills once the construction is finished.” Adding machines is something Tony has become accustom to. “We’ve replaced or added five new Fadal mills all in the last three years,” tells Tony. “Our go to machines are the Fadal 4020 3 axis vertical mill. We also have a larger 6030, but what I like is that all my guys can run all the machines. All the programs work on all the machines. It simplifies things and gives me the flexibility to run what I need anywhere in the shop.” 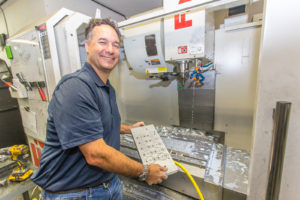 Martindale Manufacturing uses custom vacuum fixtures to hold the ultra thin material in place. They have a variety of styles depending on the part they are making.

The Fadal brand was retired for a number of years before recently being reintroduced to the industry. Tony loved how his older Fadals performed, but honestly was considering a different brand of machines to replace them. “I was still a few months away on pulling the trigger on a different brand machine,” tells Tony. “Then I heard they were coming out with a new and improved Fadal. So, I waited and spoke with the guys at All American Sales and Service. I’d bought a refurbished machine from them before, so I was confident in what they were telling me. Well I bought one, then another and now have five.” The speed and accuracy are a big improvement over the old machines. Tony is thrilled with his decision to stick with the brand that served him so well. “I always liked not having many issues with the older Fadal; they were a workhorse. My experience has been that the current evolution of Fadals has the same reliability that I count on. Walter Frank, Tim Consalvi and Mike Woodridge at All American have all been great to deal with on sales and service. We were one of the early adopters of the new machines and they were quick to address any issues we were having. The goal was to have a similar customer interface and they got it pretty close right off the bat. There were a few simple things like a knob turning a different direction than before, or a button that switched from left to right and now it is right to left. When your operator is used to it one way it having a change is sometimes counter productive. They addressed those type of items right away and we never really missed a beat.”

One of the biggest selling points for Tony was the value. Fadals are not the most expensive nor are they the cheapest but he feels they represent a good value for the machine you get. Tony orders his 4020 machines with 24 tools since most job numbers require fewer than 11 tools.  Each machine comes with a 10,000 RPM spindle and 15 HP motors. “The Fadal is a solid platform,” tells Tony. “They will remove a lot of metal quickly. We typically don’t do giant hog outs, but the speed difference was noticeable right away. The new machines just zip along. There are a ton of upgrades on the new generation of Fadals. Repeatability and accuracy have been improved to go along with the better speed.” Martindale Manufacturing still has three more of the older units that are next in line for replacement. “The gains we’ve seen have been night and day, easily 30%,” claims Tony. “A part that was taking 10 minutes now is under 7. Even with the added speed I don’t have to sweat the tolerances that I used to worry about because it just works, works really well.” Martindale Manufacturing doesn’t make millions of the same part, so they don’t chase gains of seconds, but when you see minutes shed off production times it is probably a safe bet that you made a good decision.”

Martindale Manufacturing mills, that’s what they do, and do well. Their top priority is providing the highest level of service for their customers. “We really shine when it comes to customer relationships,” concludes Tony. “What we do here is not rocket science, even though parts find their way onto rockets. The day-to-day communications required to service our customers properly is a big part of what we do. Obviously delivering a quality part on times is mandatory, but without all the back and forth communication our ability to deliver would be more difficult. Customers like the flexibility we offer. Part of that flexibility comes from having a shop full of the same Fadal machining centers and the rest of it comes from my team of dedicated and talented employees.”