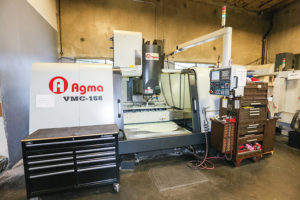 Vaughn Wilson immigrated to the United States from England in the late 80’s and found work in the local aerospace industry. “Dad came here with $250 bucks, my mom and my older brother,” tells Luke Wilson, vice president of V & T Tooling Inc. “He managed to start a career and then eventually a company from practically nothing.” Vaughn was a tooling guy and apprenticed at a well- respected program in England. When he came to the states he looked for a job and was immediately hired in a lead position, but his youth didn’t always sit well with others. “You can imagine that these 50 year old Americans didn’t always appreciate having a 25 year old Brit telling them what to do,” explains Luke. “It is hard to believe now but people filed false complaints about work visas to try and have him deported. I still run into people who came over on the same plane with him. All of his friends are doing well for themselves. They came to the land of opportunity and flourished. Dad retired pretty early in life and I’ve been running the company now for a few years.”

Luke Wilson has been with V & T Tooling pretty much since the beginning. He remembers being 6 or 7 years old sitting on a 5-gallon bucket and making parts on his dad’s old Bridgeports. While other kids played video games he machined parts. All through school he spent his time after school and on weekends in the shop. By the time he could drive and legally work at V & T Tooling he had a decade of experience under his belt. Now as vice president that experience has paid off and his youth is overshadowed by his depth of knowledge. “Every chance I got I was in the shop making parts and learning,” explains Luke. “It makes a big difference now that I am running the company. The guys on the floor might be older, but they respect my leadership because I’ve been in their position and worked all their jobs. I don’t just manage I step in and help” 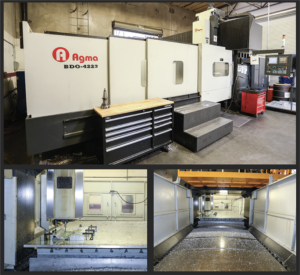 The AGMA BDO 4223 Bridge Type Machining Center is V & T’s largest machine. It has 165” of X travel, 82” of Y travel, and 40” of Z travel. They designed a door system for it so they can open it up and run parts twice as long as the machine. They purchased it with the optional 90° head so they can machine multiple sides without disturbing the setup.

Vaughn built V & T Tooling from the ground up after being dissatisfied by his salary working for others. By day he worked for Convairin San Diego and at night for Lockheed Martin. Temecula was a up an coming new suburb out of the city at the time and they settled down to stay away from the traffic. In 1998 he put enough capital together to open V & T Tooling in a small shop with a single Bridgeport mill. The business grew quickly as the titans of aerospace contracted directly with him for their tooling needs. Originally V & T specialized in tooling with a little CNC work on the side, but they’ve evolved over the years. Ninety-five percent of V & T’s clients are aerospace oriented and CNC machining has become an integral part of supporting the tooling contracts and inspection jobs. “Most of what we do is prototypes for aerospace,” tells Luke. “One and maybe two parts are 99% of the jobs we take in.” V & T Tooling manufactures everything from flight hardware and molds to fixtures that tower between their rafters. “We are ISO9001 and AS9100 Rev D certified,” continues Luke. “We support most of the big boys in aerospace. SpaceX has been a customer for something like 15 years and we just added two more rocket companies to our customer list last year. Customers like that we not only manufacture customized fixtures, but install them and do offsite inspections.”

Laser tracker inspection work has become a large part of V & T Tooling’s business model. Luke describes the trackers as a mobile CMM with the ability to measure entire buildings. “We use the trackers to set all our bigger fixtures,” details Luke. “They measure off a laser beam and are extremely accurate.” Luke has seven of them that they use in-house, in the field and rent out to other companies. “A company ten times my size might have only two, but we utilize them so much that we need more,” continues Luke. “To be a true tool builder and laser track operator you need to know how to run the CNC machines. We win a lot of jobs because all our guys are great machinists as well as inspectors. We inspect, see the problem, and then fix it. Lots of other companies inspect it, say these parts are bad and that’s it. Their service stops there. We fix it, then bring it back and install it. We do it all and the customers love that.”

Mission critical tolerances start with quality people, machine tools that get the job done, and in an environment conducive to precision. V & T Tooling has 10,000 sq.ft. total of manufacturing with 9 CNC milling centers that vary in size and brand. “Our 7500 sq.ft. climate- controlled manufacturing area has a lot going on,” details Luke. “We have a variety of brands on the floor, and all but one has been bought new in the last few years. With our continued growth we’ve been buying up new machines left and right. A climate-controlled ecosystem is crucial in our process. Our customers call out the temperature spec that we need to meet and every degree matters. A small thermal shift on a baseball sized part is one thing, but a few degrees on a 12 foot long part you need to hold .002 on is a lot harder to do with temperature changes.”
V & T Tooling has YCM, Mori, CNC Matters and AGMA mills and is quite pleased with their current capabilities. “I’ve been buying a lot of machines lately through Will Atkinson at CNC Matters,” tells Luke. “His service is great, and the machines are great. We linked up with Will when he did a retrofit on an older horizontal boring mill for us a few years ago. He mentioned that he also sold new machines and we bought a smaller AGMA machine from him. It worked out pretty well and we bought more. Our largest machine is an AGMA BDO 4223 bridge type machining center we bought a few years ago from Will. It is a beast of a machine with 165” of X, 82” of Y, and 40” of Z.” Luke and his team redesigned a custom door system that can open up to run parts twice as long as the machine. With a max table load of 22,000 lbs the BDO-4223 can handle long aerospace structure parts and heavy mold bases. It has a 50 taper spindle with a geared transmission and through the spindle coolant system. They purchased it with the optional 90° head so they can machine multiple sides without disturbing the setup. 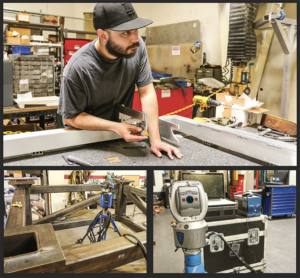 Laser tracker inspection work is a big part of what V & T Tooling does. It is like a mobile CMM and they have seven of them. A company ten times their size might only have two. You have the ability to check an entire building with it. The tracker follows a laser beam and takes the measurements. V & T use them to set all their bigger fixtures and inspect parts too large for the arm/CMM. The trackers are portable and used onsite as well as in the shop. V & T even rents theirs out when not in use.

Luke looks for a lot of torque and rigidity in every machine he buys. “We are known for killing spindles,” laughs Luke. “Not every machine can keep up with us. We run through hardened material such as inconel, titanium, and aircraft steel at the same rate other shops do aluminum. Will recommended the CNCM-6334-VG to us because he knows we get after on every job we run and it is a great size for what we do (63” of X, 34” of Y, and 27.5” of Z).” The CNCM-6334-VG has a max table load of 6000 lbs and weighs almost 40,000lbs. It also has the 50 -taper spindle with a dual speed transmission and through spindle coolant system. “The dual chip augers and rear mounted chip conveyor can take as many chips as we throw at it,” continues Luke. “My dad instilled in me the old school mentality of if chips aren’t flying we are not making money. More chips equals more money.” Even though V & T Tooling is a prototype shop spindle time is at a premium, and speed is king. “A single part might have over a 100 hours of standard speed machine work in it,” explains Luke. “I can do it in way less time. My price is lower and my profit is higher. A lot times I’m bidding on a job against someone who has never run a machine and just sits in an office calculating inches. My experience in the shop sets us apart on a lot of job estimates and my machines have to deliver on my expectations.”

The next big step for V & T Tooling will be a larger workspace. Having outgrown their current building Luke is hoping to double the square footage. “We’ve been entertaining a move for a while, but with the cost associated to move the equipment we haven’t done it,” details Luke. “All our machines are on 3’ deep reinforced pads and it isn’t cost effective to move them. An identical building 2 doors down is for sale and we really want it.” The building would allow them to move welding, inspection and fabrication to the new locations without much of a hassle. “It will free up a lot of the shop space in this building to add more CNC and it will allow me to take on larger fabrication and weld jobs in those departments. We have the infrastructure in place; we just don’t have the physical shop space to take on some of the jobs I have to turn down.”

“We manufacture things people have never built before,” concludes Luke. “This makes for an exciting work day, but also is limiting when it comes time to finding new hires. A production machinist won’t cut it here for very long, you love it here or you hate it. We have 28 great people on staff right now that love it. We run 24 hours a day five days a week. When I interview prospects I tell them how you might be working with Aluminum in the morning, Titanium at lunch and Delrin at the end of the day. It is really all over the place. It is never a dull day at V & T Tooling and that’s how we like it.”