Currently, the only CNC machines that J.E.M. F/X has three of are the Flow water jets. The versatility and ease of use makes these some of the most useful machines in the shop. All three are 6’x12’ and cut everything from wood and plastics to thick steel and aluminum.

At 18 Elia Popov went to work at Universal Studios theme park’s in-house engineering department as an apprentice. His dad, Paul Popov Sr, taught him to weld at 11 and he’s been fabricating since. “The studios have a way to figure out your strengths and I had a real aptitude for electrical and hydraulics,” tells Elia. “I did PLC’s, electrical panels and whatnot, just working my way up.”  When he transitioned over from rides to the movie side of the business, he had a lot of experience in automating things that were not really being automated at the time. “When I got into the special effects side of things, they were using a nail, piece of wood and a wire called a nail board, and still do “I came in with a small group of techs using AutoCad and PLCs and started programming automation and people looked at us like we were crazy.”

J.E.M. F/X’s has a CNC milling and turning department with a Haas VF1, VF5 and a ST20 Haas lathe. A larger Haas lathe will be the next machine tool purchase for this department. Elia likes how most machinists can run the Haas machines and that Oxnard is only an hour away if they need service.

Growing up in and around shops Elia took notes on everything. What worked and what didn’t, and why. His dream was to have his own place, and his vision was taking automation to the fore. “No disrespect to the pioneers who came before me, but I saw the studios expanding exponentially and there was no way the industry could keep up without automation,” explains Elia. “I looked at what a company called FXPerts and John Frazier was doing and wanted to do better, and felt that we had to do better. John Frazier was the first to have a CNC mill, the first CNC plasma cutter, he built his own water jet. He revolutionized the industry and set a bar for me to go after. I incorporated in 1995 and I had this wonderful mentor Thaine Morris, a legend in this business. He set me up with a ghetto place in LA and just let me flourish. What you see here is the evolution of an industry that hates evolution. Our predecessors wanted everything the same, copy cat, copy cat, copy cat. My generation came in and said we are going to stop plasma cutting by hand, have shops with proper ventilation systems and automate anything we could for speed and accuracy.” 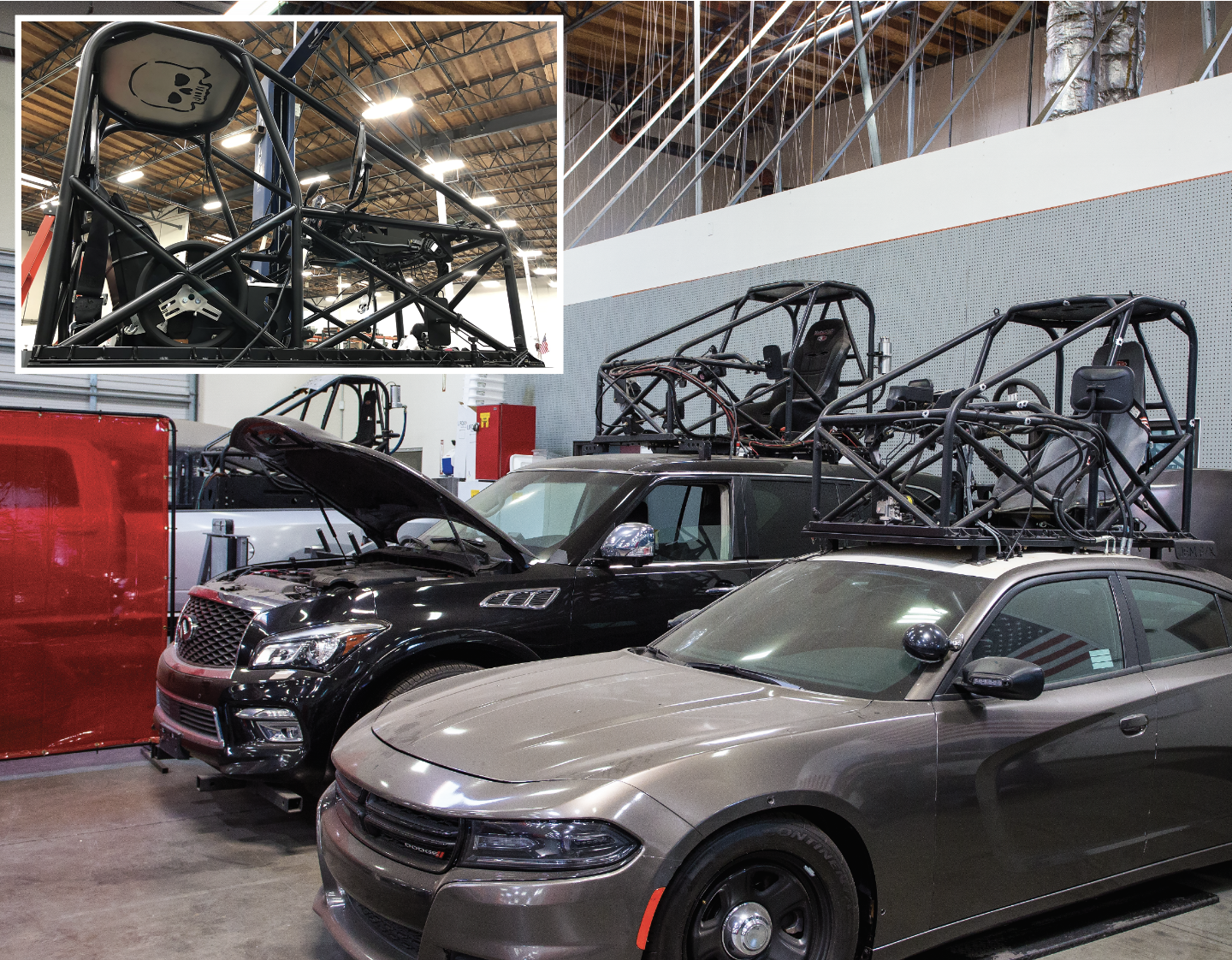 Justin Sofio spent his youth racing cars, but today he is an expert fabricator who does everything from modding out off world speeders to driving the double decker car rigs known as pod cars. “We build and rent a lot of pod cars,” tells Justin, one of J.E.M. F/X’s long time fabricators. “The actors sit in the car or truck and the stunt driver operates the rig from an alternate position. We drive and they act. We built pods for regular cars and futuristic transports, whatever the studio needs.”

J.E.M. F/X Inc. makes their home in Valencia, California. They have a 30,000sq.ft. building for manufacturing, a 30,000sq.ft. building for rentals, a few acres of outdoor storage, a couple of satellite setups across the country and three fully mobile fab shops for use on set. J.E.M. F/X’s current roster of machines include: three Flow water jets, one Haas VF1, one Haas VF5 with 4th axis table, two Boss lasers, Sampson CNC Plasma cutters, a new Baileigh automated tubing bender, a CNC press, one ST20 Haas lathe, mig welding, tig welding, full sheet metal fab and assembly. When you build everything from fog machines and roll cages to pod cars and pirate ships, versatility is a big part of choosing machine tools. “Every machine has to be quick, easy to program, and be useful to the entire shop. We work in steel, aluminum, wood, and plastics. We have three water jets because we need three machines to keep up with the workload. Pretty much everyone in the shop can use the water jets for basic cuts with just a little training. Our more experienced designers can really get a lot out of them. The water jets are one of the most important tools we have. If one is down for service, or God forbid needs a part, the guys cry like little babies even though they still have two others. The Flows have been great over the years for us are reliable as hell. Most of the time if they aren’t running it is because someone broke a tip. We’ve all broken tips, but at J.E.M. F/X we have a big ceremony of shame that goes along with it.”

Andrea Crookes is building a bomb box on the laser out of acrylic. “The box gets wired up for pyro,” explains Andrea. “The top piece I’m making now is cut, engraved, and etched all on the new laser. Like the water jet and our CNC plasma cutter the laser is one of the machines we rely on a lot. It is quick and easy to program and can do a multitude of things with a single setup. Bomb boxes are custom made for specific tasks depending on the studio’s needs.”

J.E.M. F/X have high school dropouts to guys with a master’s in engineering working side by side. Aptitude and attitude are the most important thing in this shop. They employ a few kids with proper engineering degrees that originally came to them via an apprenticeship Elia has with the local high school. “Students shadowed my people after school and worked their summers here before going off to college,” chuckles Elia. “They graduate and end up getting a job in a cubicle working for some aerospace company. Most who get the taste of this business find it hard to leave. We offer challenges that wearing a tie and analyzing a bolt in a windowless room just can’t compete with. One by one they come back into the family. We break the monotony by the engineer being involved from start to finish. They go to the meeting, design it, program it, feed the information to the team, assemble it and take it to set. They watch it succeed or fail on set, in front of everyone with cameras rolling. I have real engineering companies call and ask what the secret sauce is that I feed my crew. The secret is getting them out of a cubicle and into the action with the people who use it. They won’t put the panel in front of the adjuster when they are the one making the adjustment, and everyone is waiting for them.”

Phillip has been with the company now for ten years. Four of those years he spent primarily as a water jet operator. His background was in manufacturing prototype parts for off-road racing, a skill that pays off daily at J.E.M. F/X. “I’m more on the mills and lathe these days, but I still spend a lot of time on the water jets,” details Phillip. “All our job titles here are “anything and everything.” Wherever they need help you help. Doesn’t matter if it is woodwork, sheet metal, laser, design, CNC machining, or even going to set and blowing wind into some actor’s hair. J.E.M. F/X is 1000% a team effort.” Everything they do at J.E.M. F/X is short run prototype. If they make five of something that is a long run. “We are on a project from start to finish,” explains Phillip. “Our job is to interpret what the studio wants, design it, make it, and deploy it in the field. “Make one and make it now” should be our mantra but make one and make it by noon is just as common.” Items get used once on camera and tossed in the trash. A good example of this is a crane/winch device Phillip made for the TV Show S.W.A.T. “They had a scene that needed a crane that came out of the back of a pickup truck, got mounted into a hitch receiver and winched people from a mine shaft,” explains Phillip. “I had nothing else to go on and could build whatever I wanted. I had to design, build and test in under a week. Having a full CNC machine shop is great when building contraptions like this winch system. Many times, the water jet is the quickest and easiest way to cut out the shaped parts you need. We have three pretty identical Flow machines, and they are constantly running. All three have a 6’x12’ worktable and some days we use every inch building pirate ship parts. Other days it is small items that are part of a galaxy far far away.”

Elia’s dad taught him early on if you are going to be a welder, be the best welder, if you are going to push a broom push it the best, if you are going to be a doctor be the best damn surgeon you can. “I still consider myself to be a dumb welder,” tells Elia. “But I’d be happy to show you around the shops and my house to see what a dumb welder can do when they apply themselves. Be the best at what you do. Hammer the best nail you can. Make it perfect. Our QC department is shame, humility, respect, and honor. We measure quality in one take, perfect, in the can, and no one got hurt, maimed, or killed.” Every year J.E.M. F/X engineer, build, and install upwards of 250 roll cages in stunt vehicles. They are designed to take multiple beatings that normal people can’t even comprehend. “Our cages don’t fail because we strive for perfection and treat every one of them like it is our family members in the car,” adds Elia. “Would you build this any differently if someone you love was behind the wheel? The answer is always no. We build everything the best way possible because the reality is these stunt people are family, this entire industry is family, and we treat it as such.”

Left – Culture is a big part of working at J.E.M. F/X. The day CNC West was on site it was Elia’s birthday with cake and ice cream. They work together, play together and everything is 100% a team effort. Right – This fire stick was used one time. Phillip had two days to design and produce essentially a wand that shoots a piece of pyro. All the wiring, battery and pyro had to be inside with buttons to arm and fire it.

Even though he is at the top of his game Elia feels every day is a struggle to make it work. Every morning he thinks this is it, this amazing ride is over. There is a humility that drives him to do more and to do it better. “I never feel like I’ve made it,” concludes Elia. “That motivates me every day. Even though we have jobs in house with every studio, Netflix, Amazon, Paramount, Lucas film. Even though we do pyro, smoke, fire effects, rain, snow and so forth for all the live shows I know there is more we can do. Work hard, make it perfect, invent, create, push harder. We nitpick everything, and it shows in our work and makes this place run at the level that it does. Generations of people, crew, stunt folks, grips, lighting techs, and actors have gone home to their families after filming because we are the best at what we do.”