There are few universities anywhere in the United States better qualified to turn out successful engineers than California Polytechnic State University (Cal Poly) in San Luis Obispo, CA. Cal Poly’s College of Engineering, which comprises roughly 6,000 students, was ranked the eighth best undergraduate program in the country in 2019, according to U.S. News & World Report. The annual guide to America’s Best Colleges named the college’s Industrial & Manufacturing Engineering (IME) department number one in the nation. The guiding philosophy of the IME program is “learn by doing,” which aims to make students sound, practicing engineers from the moment they graduate.

The university’s emphasis on laboratory learning attracted Trian Georgeou, manufacturing engineering lecturer, to Cal Poly in 2014 – and away from a teaching position at his alma mater Arizona State University. Georgeou taught CAD and CNC machining classes as a graduate teaching assistant at ASU and later spent another eight years in the mechanical engineering technology program after gaining practical CAD/CAM work experience in the automotive and motorsports industries. 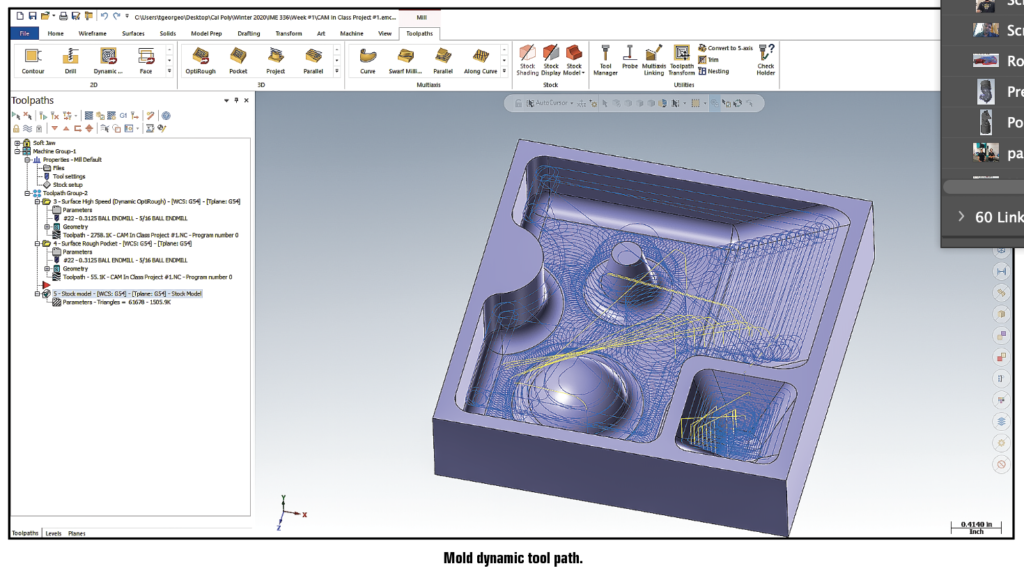 “Cal-Poly is really all about hands-on learning. Every machining class has a three-hour lab component,” said Georgeou. “We immerse the students in lab situations that will parallel what they’re going to see out in industry.”

“My opinion is that a manufacturing engineer should be able to do technician-level functions as well as engineering level functions on top of that. So, I start off by teaching students how to be technicians,” said Georgeou. “In freshman-level courses, students are measuring, squaring up vises, getting everything set up almost like a technician would. If they skip that step, they’re not going to be a good engineer; they’re not going to understand all the little mechanics necessary to get a quality product out the door.”

Similarly, advanced engineering students take their solid models and drawings into the lab, program, set up the machine tools, and machine their part designs so they can see how their designs actually get made.

“They’ll see, for example, that an end mill can’t cut a square corner looking from the top down, and they’ll come to understand what the capabilities of the different machining processes are in design,” explained Georgeou. “We’re not training machinists, but we are training engineers who understand the principles of design-for-manufacturability (DFM) and build that into their engineering skill set. Ideally, this will help them be better designers so that they aren’t making bad design decisions when they’re working for real customers.

“We have about 100 percent placement for our manufacturing engineering graduates because everyone wants engineers with practical hands-on experience as opposed to those that just learned theory in their university programs,” said Georgeou.

That “real world” practicality extends to the choice in CAD/CAM software.

“I selected Mastercam because it’s the number one tech CAM software in the world and we want our engineers to basically see what they’ll see out in industry. We want them to have a robust CAM package that can tackle all their machining needs,” said Georgeou. “I would say Mastercam is more robust than any other CAM system. When we get into multiaxis machining, the other systems don’t have as many different toolpaths to get the job done. When you look at the jobs that these manufacturing and mechanical engineering students are going after, they commonly list Mastercam experience as a job requirement.”

Upper level IME students first learn manual programming, formatting G-code and writing a simple program. They tackle Mastercam as well as SOLIDWORKS next when they are challenged to produce a customized CNC business card holder.

“I really like Mastercam. I struggled when I first learned to use it, but once I became accustomed to the layout and process of making toolpaths, it was really intuitive to use,” said Menon. “I enjoy learning how different parts are made and why certain processes are used.”

Upper-level students are next introduced to lathe programming and the main toolpaths needed to program simple 2-axis lathe parts. From there, students are taught how to use all the 3-axis toolpaths for a sample mold project featuring an inverted pyramid, a ramp surface, and a spherical radius.

“I have students figure out how to improve the process somehow by making a better surface finish or perhaps achieving a better cycle time. It’s really up to the student to figure out which tools are going to be most beneficial and economical to make that mold,” said Georgeou.

The next class, IME 336, then moves into more multiaxis work. “We have a small 3+1 positioning part. Students have to locate their coordinate system on the center of rotation and figure out how to index the part by pointing the Z upward to the tool orientation based on the right-hand rule,” Georgeou said. “They’ll go through and cut a simple 3+1 part, then a 3+2 with a trunnion that they make in Mastercam. It’s a widget part but it has seven different faces and has to be produced in one workholding on the trunnion.”

The classes culminate with students designing a small impeller wheel with five sand blades, a part that is difficult to machine, using the various 5-axis toolpaths to cut different blade shapes.

“Our belief is that students should know about all the different types of toolpaths and they should be able to put together in their mind how to get a part done efficiently using those tools or toolpaths,” said Georgeou. “Students made fun of my impeller last year and called it the shower knob. So, it’s kind of become a competition between the students to design a better impeller wheel after they learn how the 5-axis toolpaths work.”

While freshmen aren’t typically working with the software, Georgeou noted that in one of the introductory level classes, students use Mastercam Art with the Haas machines to design their own pattern for casting. With Mastercam Art’s visualization tools and editing features, students can create sculpted parts from 2D sketches, clip art, photos, and CAD files by crafting them onscreen and cutting them with specialized toolpaths. No surface modeling expertise is required.

“Students cut out their patterns using Mastercam Art to create the toolpaths, machine a wax pattern, and use the wax pattern to make the sand mold in order to cast custom coasters,” explained Georgeou.

A $40,000 working scholarship from the Gene Haas Foundation funds an “earn by doing” incentive that complements Cal Poly’s “learn by doing” approach. The grant supports student lab technicians like Emad Haddad, a fifth-year manufacturing engineering major, who works in the Haas Advanced Manufacturing Lab helping beginning students operate CNC machines and designing projects for the advanced CNC programming class. Haddad recently interned as an R&D manufacturing engineer at IAG Performance, an automotive company that designs and creates aftermarket parts specifically for Subaru vehicles. There, he was involved in redesigning, prototyping, and machining a tensioner bracket for the timing belt assembly for a Subaru WRX, a part that will eventually be mass produced, according to Haddad.

Haddad is one student who improved on Georgeou’s impeller project last year, using multiaxis machining and advanced Mastercam to design a more sophisticated piece with complex geometry. Haddad also showcased his creativity and the manufacturing capabilities at Cal Poly by using Mastercam to create a completely 3D horse’s head to represent the school’s mascot, the Cal Poly Mustang, on a 5-axis Haas machine, an achievement that gained the attention of potential employer SpaceX.

“This was a much more advanced project than anything I’d done. I watched the 5-axis programming videos that Mastercam makes available and that taught me how to control the toolpaths,” said Haddad. “Mastercam is so vast in what you can do with it and much easier than the alternatives. I have much more control with Mastercam, and I can customize how things cut, which is harder to do with the other programs.

“The engineering program at Cal Poly is phenomenal. No other school that I know of has this amount of technology and access to working with 5-axis machines. Other schools are still on manual machines,” said Haddad, who grew up with a love of creating and building things. “They teach you both a trade at Cal Poly and they teach you the engineering piece of it.  Your first or second day as a freshman, you’re already on a machine.”

Menon concurred, “I think the IME department does a good job of listening to the students and improving courses based on student needs and industry trends. The machining sequence in particular is really well-structured.”

Cal Poly engineering graduates are regularly recruited by high-profile companies such as Lockheed Martin, Boeing, Apple, and Tesla Motors, and it’s no wonder. The university’s industrial partners say they specifically seek out Cal Poly graduates because they are able to “hit the ground running.” Cal Poly’s “learn by doing” is paying dividends for the talented students who embrace the top-tier program – and for the employers who open their doors to them.

COVID-19 UPDATE:  On March 19, 2020, California Governor Gavin Newsom issued a Shelter-in-Place order requiring all “non-essential” businesses and institutions as defined by the U.S. Department of Homeland Security’s list of Critical Infrastructure sectors to either close or modify their work practices, this included colleges and universities. According to Trian Georgeou, the manufacturing engineering department adapted by video recording all of the machining processes as demos for the students to view. Subsequently, these same videos were featured in discussion sessions via Zoom. As for teaching CAD and CAM, “we are able to show the students how to model and program parts using live Zoom meetings with screen share along with some external Camtasia videos,” said Georgeou.  “We are not able to have the students in the lab to run their actual parts, so we have to rely on the simulation side of Mastercam to determine if they programmed it correctly.”  Georgeou, as well as his students, hope to be back to hands-on learning in the fall.