LESS ABOUT COMPLEXITY AND MORE ABOUT EFFICIENCY: Kimberly Machine Inc.

Twelve years ago was a turning point in Kary Laursen’s career. He just purchased a 20% stake in Kimberly Machine Inc., a company that he had worked for since 1981 while also attending ROP class in high school, and his eyes were opened to manufacturing.

The company was born in 1971 from a need for then owner James Thomas to have a little extra cash.     Thomas started Kimberly Machine from nothing out of a small building in Los Alamitos, Ca. As Kimberly Machine grew, the space required also grew, and in 1990 they landed at their current 10,000 square foot manufacturing facility in Garden Grove, Ca. They have 25 employees, are ISO 9001:2008 + AS9100C registered and are tier one suppliers to Boeing, Honeywell, Parker Hannifin Inc., Moog Inc., and United Launch Alliance. “I came on board in 1981 as they were just getting into NC machines,” tells Kary Laursen, president and owner at Kimberly Machine. “My friend’s dad was a foreman here and I begged him to get me a job as added experience for my ROP class. Since it was for school credit they didn’t have to pay me so I started sweeping floors and polishing parts.” Laursen moved on to operating, set/ups, programming, running machines and scheduling. “James was this wise German guy who could remember everything down to the first and last names of all the kids in his 2nd grade class,” jokes Laursen. “One day he realized he would need to retire not long down the road, so soon after we made a deal and I bought the rest of the company.”

That same time period saw Kimberly Machine’s management get their first taste of lean manufacturing. A customer wanted to film the setup of their part on one of the machines to use for an internal training program. Laursen viewed the workflow from behind the cameraman and instantly came to the realization that they needed to find a better way. “You don’t see waste until you are trained to see it, or until someone else is looking for it,” humbly describes Laursen. “Within 15 minutes of filming I was so embarrassed by what I saw. My guy would put the tool in the machine then go to the other side of the shop to get a drill and come back. He would put that tool in then go in a completely different direction to grab an end mill. When you are here everyday you can become blind to some things. That’s what we did every day on 15 machines and never saw the problem. It opened my eyes to how wasteful we were and that things had to change.”

Since embracing the lean roadmap Kimberly Machine has continued down the lean path with vigor and enthusiasm. “Like most companies we had to identify, define and document our processes, then one of the first things we did was set up cells,” explains Laursen. “Parts are produced in close proximity to each other with dedicated tooling and with quick change work holding systems like those offered by Chick Workholding Solutions. Raw material goes in one end of the production line and a finished product comes out the other end, with however many machines cell requires. If you utilize sub-plates, quick change work holding systems and dedicated tooling it’s possible to reduce setup times by 80%.” Those gains were significant, but the direction Laursen sees the company going required a larger commitment. 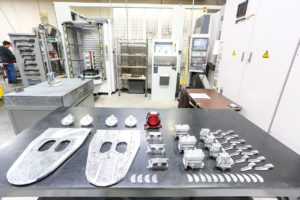 With only 20% of his pallet space utilized Kimberly Machine has plenty of room to add additional parts to the nightly run program.

Last spring Kimberly Machine stepped up their lean game, implementing a palletized Okuma horizontal machining system. “We bought an Okuma MB4000-H from Janna North at Gosiger. We added a Fastems FPV (flexible pallet container,) Fastems automated control system and a dozen Chick Multi-Lok Systems,” tells Laursen. “It is a huge investment for a shop of our size. I could buy eight more verticals like I have now for the price of this system, but I wouldn’t.” Laursen is of the opinion that his Okuma/Fastems system with one guy working 8 hours a day will out produce 8 standard verticals, with fewer headaches, better accuracy, less floor space, and supply the customer with a superior part on-time. “We have ten jobs set up on it right now,” explains Laursen. “During the day my machinist works on setups, building tooling and introducing new products into the system. He loads material at the end of the day and we run all our production unmanned in the evening. When we arrive the next morning we have currently 10 completed part numbers of varying sizes and quantities.” Kary estimates he will get 25-28 jobs setup on that machine within the next few months. The plan is to run it in 48 hour cycles. Load parts on Monday, Wednesday and Friday and let the machine do what it does best in between.

Three key elements that really make this machining system work for Lausen and his team are: the Chick Multi-Lok Systems, the Fastems control system and the tool library capable of holding 326 tools. “Anyone not using a quick change work holding system like the Chick is missing out,” tells Laursen. “It is a big system and investment, but in the end it is worth it for the ease of use and flexibility it offers us now and in the future.” Unlike a tombstone, they are non-dedicated fixtures and can be switched back and forth between faceplates (for fixture work), or dual station and single station (for vise like clamping). Designed specifically for the MB-4000H and all the fixtures can be quickly changed if needed in the future to run other jobs within minutes (10 minute set ups).

The Fastems automation system makes it possible to automate production with the Okuma machine tool and thus enables unmanned production. Using Fastems is easy: you just need to enter the order and its due date, and the system takes care of the rest. It is smart enough to know if something can’t be produced in time or if there is a bottleneck. It will even prompt the operator to load material and send an email to Kary if there is a problem like broken tooling. “It is smart enough that if a tool breaks it looks for a backup. If no backup is found it moves on to another job not requiring that broken tool. It doesn’t just sit there and stop.” Based on past knowledge, Kimberly Machine has the Okuma set up with a few redundant tools so the machine always has spares. Once a tool is deemed to be unfit to continue it is placed in the “no good” bin so they know it needs to be replaced. “A common mistake people often make is not buying enough tool space,” explains Laursen. “Why buy a machine like this to only run out of tools. I don’t want to have to change out sets of tools like we do on the standard machines. If I’m going to run 30 jobs on the Okuma it is going to require a lot of tools, so we bought the maximum.” Kimberly Machine already has 120 standard tools in place and is continuously adding to the library as more jobs get transferred to the Okuma. They are only at 20% capacity on their pallet system with plenty of room yet to grow. Kary is convinced he will max out on spindle capacity before he runs out of space for material and tooling.

I talk to other shops and there is a common misconception that in order to utilize an automated machining system like this you need long run, large quantities production type work. “Couldn’t be further from the truth”. This system enables short lead times and small batch sizes, while preserving the benefits of mass production “if needed”. Zero set up times with ready-to-use fixtures for repeatable jobs make batch sizes as small as one viable for profitable production. We are moving forward utilizing systems like this. If I could change over the entire shop and put everything on that machine tomorrow I would. For us the system isn’t about how complex a part we can manufacture. It’s about quality, efficiency, quick turnaround, reduced lead-time, reduced inventory and competitive pricing, now and for a long time to come.”