Evan Jones has a passion for machining. So much so, he practically has coolant coursing through his veins. His grandfather started Humboldt Instrument with a partner in San Leandro, Calif., and Jones spent his teenage years at his father’s “mom and pop” machine shop, Humboldt Northwest, in Oregon. By his early 20s, Jones realized machining was more than just a job or career path. “Machining became a lifetime endeavor,” he said. Jones built up an immense knowledge base, racking of hours upon hours of spindle time. He learned the best machining practices, managed customer relationships, and gained tremendous insight into running a successful CNC shop. 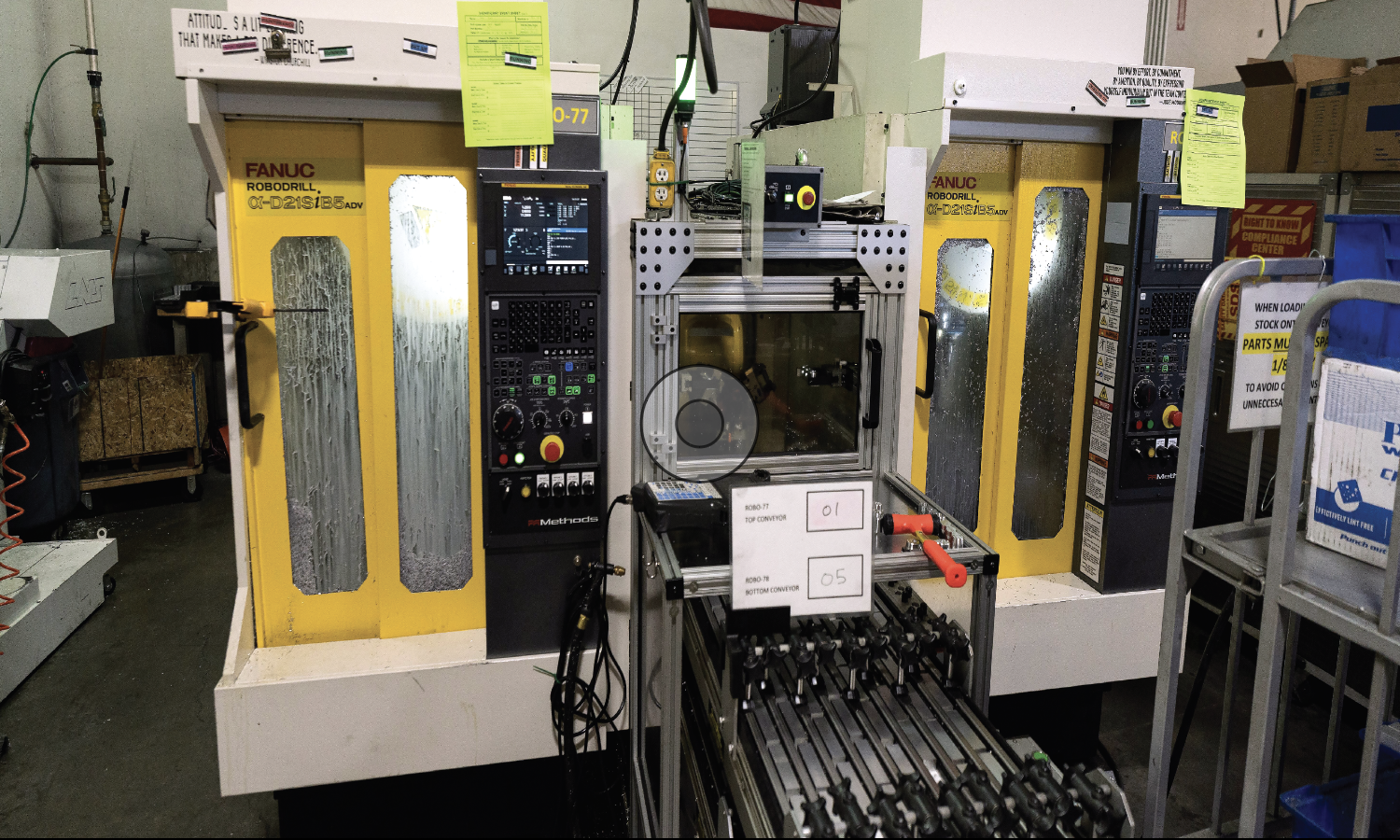 By the time he opened up his shop, 3rd Gen Machine of Logan, Utah, he was spending every waking minute mulling over cutting theories, tools, and the most efficient way to tackle a job. One of the critical ingredients in that recipe is high-quality CNC machines. “Being a machine shop owner, my passion is equipment,” he said. “So that’s what gets us excited, looking into possibilities with how you can serve customers better, it’s all about quality, runtime, and productivity.” Jones is a forward-thinking machine shop owner. So, when 3rd Gen Machine was running into production issues, he took action. Chip imprint scratches were causing his scrap rate to rise. His throughput wasn’t where he wanted it to be. The constant loading and unloading of raw materials and finished goods were taking a toll. The final straw came in the form of a spindle crash.

“That day, we sent a purchase order to Methods for the automation system,” Jones said, cracking a smile.

Jones worked with Methods on a turnkey automation cell utilizing the JobShop Cell, which comprises two FANUC RoboDrills and an articulating FANUC LR Mate 200iD robot. Jones first encountered RoboDrills in 2020. A colleague recommended the vertical machining center for its reliability and repeatability. Soon enough, Jones reached out to Methods’ sales engineer David Snow. The two set up a tour of another CNC machine shop outfitted wall-to-wall with RoboDrills. After seeing the RoboDrills in action, Jones worked with Methods to develop a time study on the JobShop Cell. “I’ve had interest in automation for more than a decade,” he said. “The approach was a little bit different than what I imagined, but it was the right approach, really.” Before implementing the automation system, 3rd Gen Machine would try to make multiple parts simultaneously. While that process made good use of fast tool-to-tool change times, the shop’s throughput plateaued; it could only produce components as fast as people could manually load and unload parts. That cumbersome process is partly what led to the spindle crash.

Methods’ applications engineering team designed the cell for single-piece runs. That method retained the RoboDrill’s lightning-like 1.3-second chip-to-chip change time and removed the possibility of errors in the loading/unloading process. Moreover, the shop was free to run unattended. The results were better than anyone predicted. “You’re working with the limits of a robot, which are nearly limitless,” Jones said. “After we got in there and optimized the programs to the equipment, we were able to surpass the cycle time on the time study. That definitely showed us that the RoboDrill cell was the way to go.” 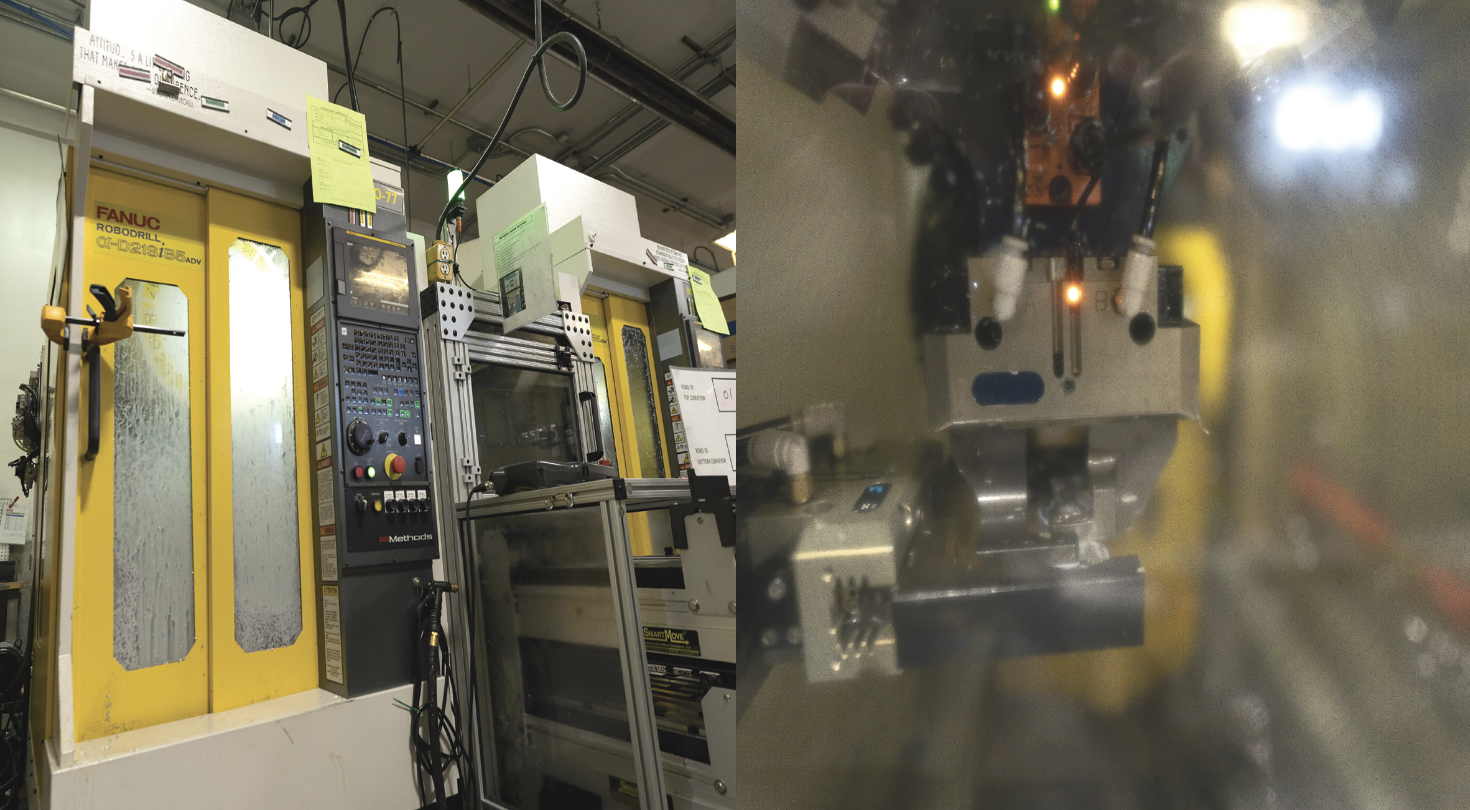 Left – The cell ended up working so well, 3rd Gen Machine installed a second unit and has a third JobShop Cell on order. Right – Cell interior.

The JobShop Cell improved nearly every workflow on the shop floor; it unshackled skilled laborers so they can tend to other equipment rather than loading/unloading machines. And, the cell came online just in time for a high-production project for the outdoor goods industry. “We had a big ask for Methods, we wanted to make nine different parts from the twin cell,” Jones said. “Customer demands increased at the same time we brought that in, it would have been challenging to get their products on more and more equipment.” Not only did Methods deliver on that big ask, Jones said, but experts also helped him work out some kinks. At first, chips were getting near the cell’s proximity sensor and piling up in the wrong area. “I requested additional air ports for the robots to help me manage chips, and Methods came in and solved that for me,” Jones explained. The cell ended up working so well, 3rd Gen Machine installed a second unit and has a third JobShop Cell on order. The JobShop Cell puts out twice the output compared to other solutions while only taking up half the floor space; Jones said, a valuable commodity. The shop’s throughput increased to the extent employees had to stage finished goods in rented shipping containers. However, those are temporary solutions. The JobShop Cell has helped 3rd Gen Machine’s growth, and in turn, Jones is utilizing that capacity to expand his business with a new building.

But 3rd Gen Machine is doing much more than expanding its capacity and adding new machines. They’re further developing departments and capabilities, planning for long-term, consistent growth, and cementing their position as a full-service machine shop. Jones said he’ll always keep Methods in mind when he needs more machines. “They’re just down to earth, real people interested in helping you with creating solutions and solving issues of today.”