JUST LIKE MOST SHOPS, ONLY NOT REALLY, AND A LOT COOLER: Jet Propulsion Laboratory 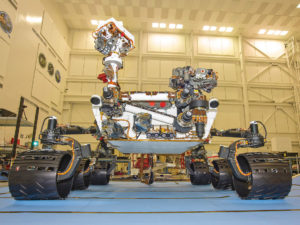 This photograph of the NASA Mars Science Laboratory rover, Curiosity, was taken during mobility testing on June 3, 2011. The location is inside the Spacecraft Assembly Facility at NASA’s Jet Propulsion Laboratory, Pasadena, Calif.
Image Courtesy NASA/JPL-Caltech

JPL’s early successes were developing the United State’s first ballistic missiles, and being part of a classified joint operation to launch Explorer 1, the United States first satellite. JPL employed female mathematicians in the 40’s and 50’s to preform trajectory calculations becoming pioneers not just in technology, but also in equality. By 1961 they had on staff Dana Ulery, their first woman engineer who designed and developed algorithms for the tracking systems on the Ranger moon missions, and Mariner’s Venus, Mars and Mercury missions. The Ranger and Mariner missions paved the way for the Apollo program that put the first humans on the moon. Current well known programs include MSL (Mars Science Laboratory), Jason-2 and OCO-2 (Orbiting Carbon Observatory 2). “Curiosity” the Mars Rover’s mission is to determine whether the Red Planet ever was, or is, habitable to microbial life, while Jason-2 and OCO-2 are monitory different aspects of climate change while orbiting Earth.

JPL is the dream job of scientist, engineers, researchers, and machinists alike. Their near 200 acre Pasadena, CA. facility looks like a college campus with deer crossing the quad and people moving from building to building. Of the 5,000 staffers and employees, 12 make up Manufacturing Engineering Services, with an additional 21 CNC Machinists all who report to Bob Moncada.  He is the group supervisor and oversees 5 buildings of the coolest manufacturing most have never seen.

Bob’s been with JPL for nearly 30 years, working his way up through the ranks. “I’ve done a lot of different things throughout my career here,” he explains. “I’m the group supervisor for Manufacturing Engineering Services, but I also have oversight of the machine shop group and have for 2 years now. We are actually in the market for a new machine shop supervisor.” Moncada’s primary group, Manufacturing Engineering is tasked with the being on the front lines of all new projects. They meet with engineers, review designs for manufacturability, create the planning, and decide if the part will be made in-house or by an outside vendor. Each project is treated as a customer, and they support a lot of projects at JPL, so it’s important for all the departments bringing them work to be treated equally. “Our job is to supply the engineers with what they need, when they need it,” explains Moncada. “The first question is if the part is a good fit with our equipment. We like to challenge our team, help keep their skills sharp, so we typically don’t like giving them easy parts to manufacture. If it is a good fit it comes down to delivery time and any extra steps in the fabrication like EDM or grinding that might cause delays if sent to an outside source.” JPL’s outside vendors do a great job for them, but aggressive schedules sometimes just don’t work with sending it out.

The machining department is spread between five buildings totaling 35,000sq.ft. The primary manufacturing center alone houses three Makino PS95’s and three older Fadel 4020 vertical machining centers, one Makino V99L vertical machining center, a Mitsubishi Horizontal Boring mill, another 5 axis trunion milling center and the EDM department with both wire and sinker EDMs. Other production areas have everything from 3D printers, punch presses, Hardinge lathes and Bridgeport mills, welding, sheet metal fabrication, two CNC water jets, press brakes, and a DMG Sauer Ultrasonic 20 5-axis. “We acquired the DMG Sauer machine basically for the ultrasonic capabilities of machining ceramics and glass,” tells Peter Bruneau. “We service mostly the microwave department with cradle to grave experiments. The machines are all calibrated annually at better than one micron in X-Y-Z in full travel. A typical feature for us is 1.5 thousandths of an inch.” Peter demonstrates under a microscope how he roughed in a feature and was going in by hand to finish it with a .001 radius in the corner. Just a typical workday for the teams at JPL.

Everything done by the mechanical fabrication group is one off prototype work. “Rarely do we do more than one or two of anything,” describes Moncada. “A typical part run is 30-50 hours including programming, setup and running. Our machinists do all their own programming, all their own setup, all the running and even bench it after the work is complete. We do a lot of lights out work in our milling and EDM departments so everything needs to be well planned.” Quality control is a different department all together and rarely sees any part that is non-flight or research based. “All flight hardware goes to QC and on occasion if there is a critical feature we want double checked we will send a part to QC. Other than that they don’t have much involvement with our group.”

JPL employs the best of the best, but don’t think that just because you don’t have a PHD in quantum mechanical electrical engineering with another PHD in Astrophysics that the dream job is unattainable.  Machining the coolest parts on and off the planet only requires a high school diploma, super strong math skills, extremely motivated, and be willing to learn from other machinists with 20-30 years of experience. “Our machinists on the floor have varying degrees of continued education,” tells Moncada. “They love their jobs and typically don’t leave here until they retire. Low attrition is great, but it has left us, like everyone else with an aging workforce.” JPL is in a constant state of searching for new talent that fits within their work environment. “Some of the seasoned machinists can get a bit cranky at times, and some less experienced new recruits may think they know it all. However when everything meshes, the young machinists can really learn a lot from our seasoned staff members. One of my jobs is to ensure everyone is treated with respect and can get along well.”

JPL’s talent search often begins by recruiting candidates from the local schools. They offer a 2000-hour internship program and start with 4-6 candidates. They are graded on a variety of factors before being left with one or two. “You come in as a part time machinist,” describes Moncada. “Go through the program which consists of training and real work to become a certified journeyman and get a nice pay bump.” They currently have four machinists on staff who came through the apprenticeship program.

Coming to work in an air-conditioned, state of the art manufacturing facility is enough for most, but the icing on the cake comes from the type of work they do at JPL. “Every job is challenging,” finishes Moncada. “We get to utilize the best of everything and manufacture interesting parts that help shape the world. But beyond that is the thing I’m most proud of, the team of people I work with. None of these things would be possible without the relationship between the design and manufacturing engineers, and the machinists. There is a lot of respect and collaboration between all the departments and it shows in the work we do.”