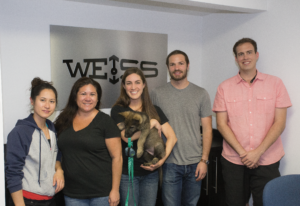 Cameron and Whitney Weiss began assembly and finishing of the first Weiss timepieces in 2013 from inside their LA apartment. In June 2013 they debuted 10 of their Standard Issue Field Watches at an event in San Francisco. Today, they are sold through 45+ retailers including Barneys New York and MR PORTER.

Cameron has always had a love of timepieces and wanted to base a career off that passion. “Whitney and I met at USC while I was studying business when I decided watchmaking school was something I wanted to do,” explains Cameron Weiss, founder, president and designer at Weiss Watch Company. “I spent the next two years in Miami learning the craft.” Miami is not known for its watchmaking, but the watch manufacturers set up schools there to lure young people into the trade. The skills gap exists in watchmaking same as it does in CNC manufacturing, so having a new generation of people to service and repair products is necessary. “The big brands like Omega and Rolex need qualified watch makers to service the watches they sell here in the US,” explains Whitney Weiss, VP of Sales and Marketing, at Weiss Watch Company. “So Cameron went to school at their expense and learned the Swiss curriculum.”

In Miami, Cameron learned the basics of design, simple repair, simple movements and fabrication of parts. “The school is really small,” details Whitney. “It is more of an apprenticeship with only six students.” Two master watchmakers taught students how to reverse engineer parts, micro mechanics and how to machine parts on hand turned machines. After graduating from the Nicolas G. Hayek Watchmaking School as a WOSTEP Certified Watchmaker, Cameron and Whiney moved to New York and Cameron went to Switzerland for yet more training. Cameron honed his skills at Audemars Piguet and Vacheron Constantin, two of the most prestigious luxury watch brands in both Switzerland and the US. The extensive training covered complex watches, perpetual calendars, tourbillons, more mechanical memory, and more moving parts. “Time is only so much, but how you split it and how often it is split becomes more complicated,” explains Cameron. “Hours, minutes, and seconds are all very basic, but adding a chronograph or calendar that recognizes leap years are all very complex tasks. I took a job in Beverly Hills, Ca. before starting Weiss in our apartment with Whitney.” 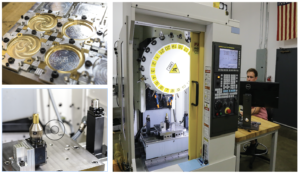 Weiss purchased the Fanuc Robodrill when they moved into their Torrance, Ca. facility. They considered it a “no-brainer” for its ease of use and capabilities. The compact machine packs quite a punch. All the workholdings are customized to their needs. The tiny parts cause unique challenges. Remember the parts can’t have a tab so holding them is difficult. Tolerances in watchmaking are very tight. Weiss has to hold + .0002 and – nothing on most milled pieces.

Weiss produces two styles of watches, the all-mechanical self-winding version, and an automatic winding model. There are no electronics in either timepiece, only mechanical parts. The basic explanation on how a mechanical watch works is simple, the watch slowly unwinds. The reality is more complex than that. You start by winding the crown that loads a spring. The spring puts torque onto the gear train and a wheel. That wheel has an escape wheel next to it allowing time to escape in a set fashion. Cameron’s designs are timeless, elegant and clean. He drew inspiration from old gauges in cars and airplanes. “I really like simple watches,” tells Cameron. “A manually wound watch introduces people to a whole different concept to wearing a watch. You become part of it, you wind it and understand that the movement processes is charged by you. Without your input it doesn’t tell time. It is something most people have never done before. Becoming part of the process is a bonding experience that customers enjoy.”

Weiss focuses their efforts on time only, because no one else in the US is manufacturing watches in this way. How Weiss manufactures sets them apart. “Most watchmakers here only know the basics,” clarifies Cameron. “They know the same table top mill work and hand crank lathe techniques that I learned in Miami, but nothing about manufacturing.” Here at Weiss, Cameron will sketch out his design then give that to his head of engineering and manufacturing, Grant Hughson to build in 2D and 3D on the computer. They figure out the best way to manufacture it, and tweak the designs to meet the best manufacturing methods. The watch cases are the largest item in the manufacturing process and are one of the few items not manufactured in house. “The cases are machined from a solid block of stainless steel,” explains Grant. “Our case is the largest part of the watch, but to most shops it is considered a very small part. The really small specialty parts are what we want to control in house. It is easier for us to find a local shop to produce the case then one of our actually small parts with ultra tight tolerances.” 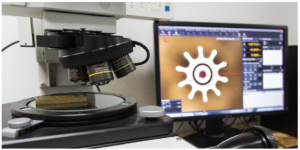 It is very difficult to see features under .005” even after a full night of rest and a microscope. Weiss have built many microscope fixtures to give them the ability to visually inspect (looking for features not dimensions) the parts.

Weiss moved into their Torrance, Ca. manufacturing facility two years ago and have been filling it up with equipment ever since. Originally the thought was to put a mill and lathe inside the garage at their apartment, but they thought better of it. Having the added space gave them the flexibility to select the right machines for the right job. Each timepiece has more than 150 parts inside. Some repeat like screws and gears, but total parts exceed 150. After a lot of research Weiss decided on a Fanuc Robodrill vertical machining center and a Tornos Swiss Nano. “The Robodrill has such a great reputation and a lot of capabilities for the price,” tells Grant. “There are so many of them sold all over the world that it was almost a no brainer that we get one. It has a compact size with a lot of bang for the buck. We added probing and tool setting to ours for extra capabilities.” The Swiss aspect of watchmaking required a little more thought due to the nature of the parts. Each of the parts inside the watch is a piece of art. They are different than normal parts. You look at the print and there are dimensions and surface finishes, but there is whole other set of challenge that are different than most parts. Literally if you drop a part or grab it wrong it is scrap. So, when it came time to purchase a Swiss style machining center they looked no further than Tornos. “Tornos has an undeniable pedigree in watchmaking and is a Swiss company,” continues Grant. “They have experience in making watch parts and the Swiss Nano machine can actually produce 2/3 of all watch movement components. We’ve been able to look to them for assistance because of their experience. It is a really complicated machine and it is very helpful for them to know what it is that we manufacture.”

It was important to decide on machine tools with a lot of versatility without sacrificing any quality on the more complex parts. “The repeatability, scalability, and quality control is fantastic off our machines compared to a hand turn lathe,” explains Cameron. “Being able to scale a part with close enough tolerances for assembly to take place is how we are able to keep the prices so low. The companies I used to work for would basically rough out a part and it was up to their watchmaker to get the parts within spec for assembly. It is very time consuming, therefore very expensive. We appreciate that artistic value, but for us we want to make a lot of mechanical movements and expose people to the joy of owning a mechanical watch.” 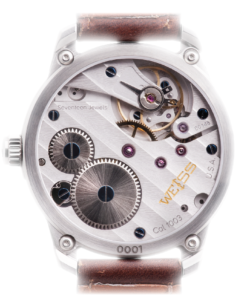 Tooling and workholding is a major endeavor for these parts. You can’t just drop watch parts in a generic vise and go at it with an end mill. They require specialized tooling like half a millimeter boring tools and fully customized workholdings. “There is a set of challenges in each part we manufacture,” tells Grant. “Remember, these parts can’t have tabs on them so how we hold them is difficult. Each fixture is designed from scratch. Tolerances in watchmaking are very tight. We have to hold + .002 and – nothing on most pieces.” Bridges and main plates are at the core of the watch assembly. Everything mates to those pieces. One part might have 50 or 60 critical dimensions on it. Most are two sided so they have to machine it, flip it, probe it, machine the back side, and check their work under a microscope. One of the hardest things about holding small parts is pressure. Too little pressure, part goes flying. Too much pressure, you get potato chip parts. Grant has been able to limit this by the use of torque wenches. He also relies on MiteeBite long length channel & steel wedge to innovate creative workholding solutions.
Spend two seconds with the men and women at Weiss and you see the passion and pride they take in their work. Grant summed it up best, “One of the best aspects of manufacturing time pieces like this is being able to show the finished product. You can work in manufacturing your whole life and not be able to explain or show people what you do.” He should know. He Google’d “California watch maker” 1000 times before seeing Weiss pop up in the results. People have an affinity for watches and no one more so than Cameron, Whitney, Lisa, Christy, and Grant.

Every watch in every ad is set at 10:10. This bit of watchmaking trivia just changed your life. You can’t un-see, or un-know this. The arrangement of the hands is symmetrical and deemed pleasing to customers. The hands are not overlapping and clearly visible. The logo, usually under the 12 is showcased nicely between the hands. It is an industry standard for watch photography. Weiss set theirs at 10:09. “It works better for me visually and spiritually,” explains Cameron. “We respect the traditions of master watchmakers, but do things slightly different here at Weiss, so it’s 10:09 for us.”