High Speed Machining is at the Core of SKM Industries

SKM Industries Inc. is a Valencia, Ca based job shop focusing on commercial, medical and aerospace parts. Sanjeev Kapoor started the company in 1992 renting spindle time from another shop to run his parts. From day one Sanjeev has cut his own path, embracing technology, and inventing solutions to meet his needs.

A mechanical engineer by trade, Sanjeev Kapoor began his manufacturing career in a manual shop working for others. It was the 80’s and the owners took him to the Westec trade show where he was exposed to CNC for the first time. “Right away I saw the added value in CNC,” tells Sanjeev. “I convinced the owners to buy a Bridgeport with a CNC control. That was 1986. I liked computers, and had a little programming experience from school, I knew I could program it, but they took a little convincing. Within a couple years we had half dozen CNC machines and were running Gibbs Cam.” That shop did a lot of production work to take advantage of the still relatively new CNC technology. Sanjeev was programmer and production manager. “I began to look at ways to reduce the cost and maximize production,” explains Sanjeev. “I learned right away the value of good tooling.  Fewer tool changes means less down time and less worker interaction. Decades later I still apply the same principles, focusing on tooling and fixtures that can reduce cycle time at the same time reduce interruptions. “

When Sanjeev went out on his own and started SKM Industries Inc. he spent the first year in business renting spindle time in a shop in Camarillo, Ca. “I helped them out with their prototype work, and they let me rent open time on their machines,” touts Sanjeev. “It worked out well for about a year until I could purchase my own CNC machines. I started with a Fadal mill and a Mazak lathe. I’ve been adding machines ever since.” SKM moved to their current 11,000 sq.ft. manufacturing facility in 2008 where they house 15 Haas and Mazak CNC machining centers. “As a job shop we have to be ready for anything,” explains Sanjeev. “We have 4 axis milling and advanced turning centers. We work in all materials ranging from aluminum, steel, plastics, copper and brass to more exotic alloys like Kovar. One of our largest customers is an OEM and we make hundreds of different part numbers for them. We run anywhere from 5 pieces to 50,000. We prefer the production runs, but are always ready to help out a customer who needs a smaller quantity. We use the latest version of Gibbs Cam and it is all set up to maximize high speed machining. Our high speed machining practices allow us to be competitive on pricing even with smaller run quantities.”

Technology is a big part of manufacturing at SKM, and high speed machining on all materials is at the forefront. Peel milling with 5, 6, and 7 flute end mills is common practice regardless of material. “We are using a 5 flute end mill for high speed machining on aluminum,” describes Sanjeev. “Most people use a 2 or a 3 flute conventional tool.”  More flutes offer them the ability to machine at a much higher speed. “High speed machining is taking a smaller cut, but going much faster,” continues Sanjeev. “You have less wear on the tooling, less wear on the machine, no chip trapping issues, and less load on the part. We cut at 600” a minute, only taking 30, 40, or 50 thou axial cut at a time. The load on everything is very light and we get way better life out of everything involved. We have fewer tool changes and they never break. It is a very stable process allowing you to predict life expectancy regardless of the job. If a tool lasted for so many cutting hours on this part, it will last that many cut hours on any part because the process is the same. We monitor loads on all the tools so before the tool breaks we change it out. That is pretty standard practice in shops running large diameter tooling, but it is rare that you see it on small tooling like we use. A larger tool has the ability to break and do a lot of damage, but for us we use it to get the absolute most life out of the tool and replace it before it breaks and shuts down the machine.”

At 600” a minute, tooling is a key element when it comes to producing a quality part. Sanjeev relies on Jonathan Saada of High Speed Corp to help him get the most out of his tooling investments. “Jonathan has so much experience, he is a wealth of information,” describes Sanjeev. “I’ve known him for many, many years and I always make the time to talk to him when he comes by. That is not the case with most sales people. He introduced us to YG1 tooling about a year ago and I’m so glad he did. We’ve seen an increase in tool life and a decrease in tool pricing across the board.” 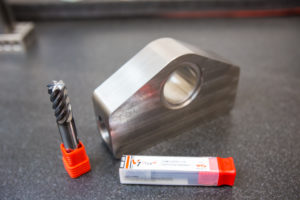 SKM made the switch to all YG1 high speed end mills. They were using 7 flute end mills for high speed machining of steel until Jonathan from High Speed Corp brought in a 6 flute. He said try it at the same feeds and speeds and let him know what you think. They got 25% better tool life out of it without changing anything else.

“YG1 is a completely new tooling line for us,” tells Jonathan Saada of High Speed Corp. “Sanjeev is one of the few people who are always eager to try new things. He has a different way of looking at tooling than most of my customers. He doesn’t just look at the price of the tool; he looks at the throughput from the tool.” Sanjeev explains that people often confuse the price of the tool with the price of the tool per part. He can look at his self made Job Shop Manager MRP system’s hard cost matrix and see exactly what the cost was to make any given part factoring in labor, tooling, outside processing, materials, and so forth. “YG1 are one of the biggest end mill manufacturers in the world,” continues Jonathan. “Getting tools out in the real world was important and I knew SKM was a perfect fit. I know that SKM produces only the highest quality parts and I knew that Sanjeev would give me honest, and informed feedback on each YG1 product he tested. His data collection processes are fantastic, so we would know right away how effective the YG1 tooling compared against his current and past tooling choices. I brought him YG1 Dream Dills, YG1 4, and 6 flute end mills, and YG1 turning inserts. He was able to beat the competition in every category.” Sanjeev developed and coded the JOB Shop Manager MRP system himself, which is designed to manage and integrate data for every work order and also deploy it on iPads at every work station so that any revision changes, prints, travelers, run times etc. are live everywhere at all times.

With over three decades of experience, Sanjeev is not one to just believe the hype that comes from a tooling salesman. But he is a person always looking for any gain in performance. For him the first real test came on a part that he has years of past data to compare to. “I was running a job in 4140 at 40 Rockwell,” describes Sanjeev. “The max we were getting was eight pieces per corner of the insert. These were not cheap inserts, but a respected tooling brand that cost $16 or $17 each. The YG1 insert on the same job lasts for 24 parts per corner and costs only $6. So we got a huge gain in tool life, and pay less for it. It was amazing; we didn’t believe it at first. We run 1200 of that part a month and the results speak for themselves. I switched over to YG1 on every turning insert available on every job. Same thing for end mills. We were using 7 flute end mills for high speed machining in steel and Jonathan brought in a 6 flute. He said try it at the same feeds and speeds and let me know what you think. We got 25% better tool life without changing anything else. They too have a much lower price point. It has been a really, really good change for us. We switched all the end mills too. YG1 are adding more and more tools to their catalog and if I need that tool I don’t hesitate to order it from Jonathan.”

One of the things that really sets SKM apart is that Sanjeev has trained every operator. They don’t hire people who have been a machinist in other shops. “We like to train in- house,” tells Sanjeev. “We want a clean slate, and have found that starting from zero is the best way to teach good habits instead of inheriting bad ones.” An example of those good habits is that the operator checks critical dimensions on every single part. Not every five, or every ten parts, but every single part. “The best complement I’ve ever got from a customer was when he told me how he could calibrate his mic off my parts. We’ve virtually eliminated the problem of not being able to find skilled workers. I hire young people, I believe in the youth. I hire college students and work with them on their schedules. My latest hire had no manufacturing experience. He applied with a background in bookkeeping. There was something about his resume that struck me and I called him in for an interview. He always wanted to be an engineer, but it didn’t work out that way. In high school he tried to buy a table top CNC mill for fun. I explained that he isn’t going to get to utilize the experience he already has, and he didn’t care. He just wanted to get his foot in the door. He starts next week.  Youth is the future of manufacturing, and it is key part of our success. They are young, eager and hungry for knowledge. I like that.”