According to Greek mythology, Alkyone, the daughter of the god of the winds Aeolus, became so distraught when she learned that her husband had been killed in a shipwreck that she threw herself into the sea and was changed into a halcyon, known more commonly today as a kingfisher. Legend is that the kingfisher built their nests on the sea during the winter solstice and charmed the wind god enough that he created a period of unusual calm that lasted until the birds’ eggs hatched. A halcyon is synonymous now with calm and prosperity and its fitting that Tony Doan opened Halcyon Manufacturing in December of 2020, at a time the world needed a little of both.

San Jose, California is strewn with manufacturing. Mom and pop shops sit across from giants of industry, there are few places in the world that are a bigger hub of manufacturing. It is a great place to be when you have big plans. Tony has plans, and early targets began to fall before the first machine hit the floor. Starting from just a concept and no actual customers, building Halcyon from the ground up meant purchasing machine tools with the most versatility and the best options for the money. “I needed good equipment in the shop and in QC,” tells Tony. “The budget wasn’t unlimited but predicated on the work we might get, and the work we were going after. Everything needed to meet a certain criteria. I had to be selective and find the best value and performance without sacrificing accuracy and reliability. I bought three machining centers that checked all my boxes.” Tony purchased a Doosan DNM 5700S 3 axis mill, a Haas UMC 500 5 axis mill, and a Doosan Lynx 2100LSY multi spindle lathe with live tooling. A second Doosan DNM 5700S was added a short time later. QC boasts a Zeiss Spectrum 7/10/10 CMM, Mitutoyo PH-A14 optical comparator and a Mitutoyo LH-600E digital height gauge. “Within the first month of operation we were ISO9001 certified,” touts Halcyon’s lead programmer Duncan Lewis. “Not sure if there is an official speed record, but we knew ISO certification was a critical first step to grow the business. We are working towards our AS9100 cert now and should have it soon.”

Duncan Lewis knows a few things about getting the ball rolling quickly. He understood at an early age that this was the industry for him. Only in his mid 20’s he already has nearly a decade of programming experience and gaining more each day. His Ohio high school had a small mill and lathe in their metal shop that gave him a taste for machining. He transferred to a nearby trade school program and spent his senior year working full time at a local shop. “I had a few mentors at my first job that really helped me see my potential,” tells Duncan. “They all came from Lockheed in Akron and were a wealth of information. I always excelled in math, and programming just came naturally to me. I worked all over the country before coming on board here at Halcyon. I targeted different positions that would enhance my skills, further my career, and give me new challenges. I met Tony online working freelance programming gigs off the website Up Work. We just hit it off right away. He is young, hungry, and has a couple companies that are blowing up, but he wanted to get back into manufacturing. His goals for the business coincided with mine and he brought me on board as lead programmer. He was building my dream shop; he needed a good programmer, and I wanted to work here. I was the only guy programming and running the machines, while Tony handled inspection. We split time driving the truck for deliveries, everything was a two-person show. We’ve been growing so fast that isn’t the case now. We have open positions to fill and just hired a second programmer. He is going through training on SolidCAM now.”

Halcyon Manufacturing has twin Doosan DNM 5700s vertical mills. Both are fully decked out with probing and Orange Vise work holding solutions. Halcyon appreciates all the features that come standard on the Doosan machining centers.

As with any new business, Halcyon will take any job that comes in the door, but specifically they are targeting the aerospace/defense sector with a short term goal of AS9100 certification and a long-term goal of becoming one of the primes in the aerospace industry. Everything down to their Orange Vise bench vise is geared towards quality and precision. “After extensive research we landed on the Doosan machining centers,” explains Duncan. “We went over all the jobs we had on deck, where we wanted to go as a company, and decided on the capabilities we needed. We got in touch with Ellison Technologies after seeing they were a part of Titans of CNC Boombastic Show. The machines we were attracted to were higher end than what was showcased in the Titans deal, but we were interested in what they could do for us. Our point of contact is Audrey Gorman who was, and still is a great asset. Any questions, issues, concerns I just shoot her an email and she gets right back to me with either an answer or with the information to get the answer. We couldn’t be happier about the service we’ve received. As a new company without a decade’s long relationship, it is refreshing that new customers like us are treated so well with post sale service and support. That isn’t always the case and we really do appreciate it.”

Prior to purchasing the machines Halcyon had no planned work whatsoever. Tony had a client, but no actual jobs. He thought they needed time to set up more, but the machines were under power, and they had tooling. Duncan assured him that they were ready to take on work and by the end of next week they were cutting parts. Halcyon chose the Doosan DNM 5700S as one of three machining centers to support the new enterprise. The top-rated vertical offers many standard features not found in its class to go along with its generous work envelope and Fanuc Oi-M controls. “We like the features that came on the Doosan standard,” details Duncan. “We added probing to our machines, but they came prewired. We upgraded the chip conveyer too, but everything else is stock. The spindle speed is great, it has a real spindle chiller and through the spindle coolant and air. We like the rigidity and the BIGPLUS spindle. It is a Cat40 spindle but with the right setup can cut like a Cat50. Both our Doosan mills are decked out with the latest work holding solutions from Orange Vice.” 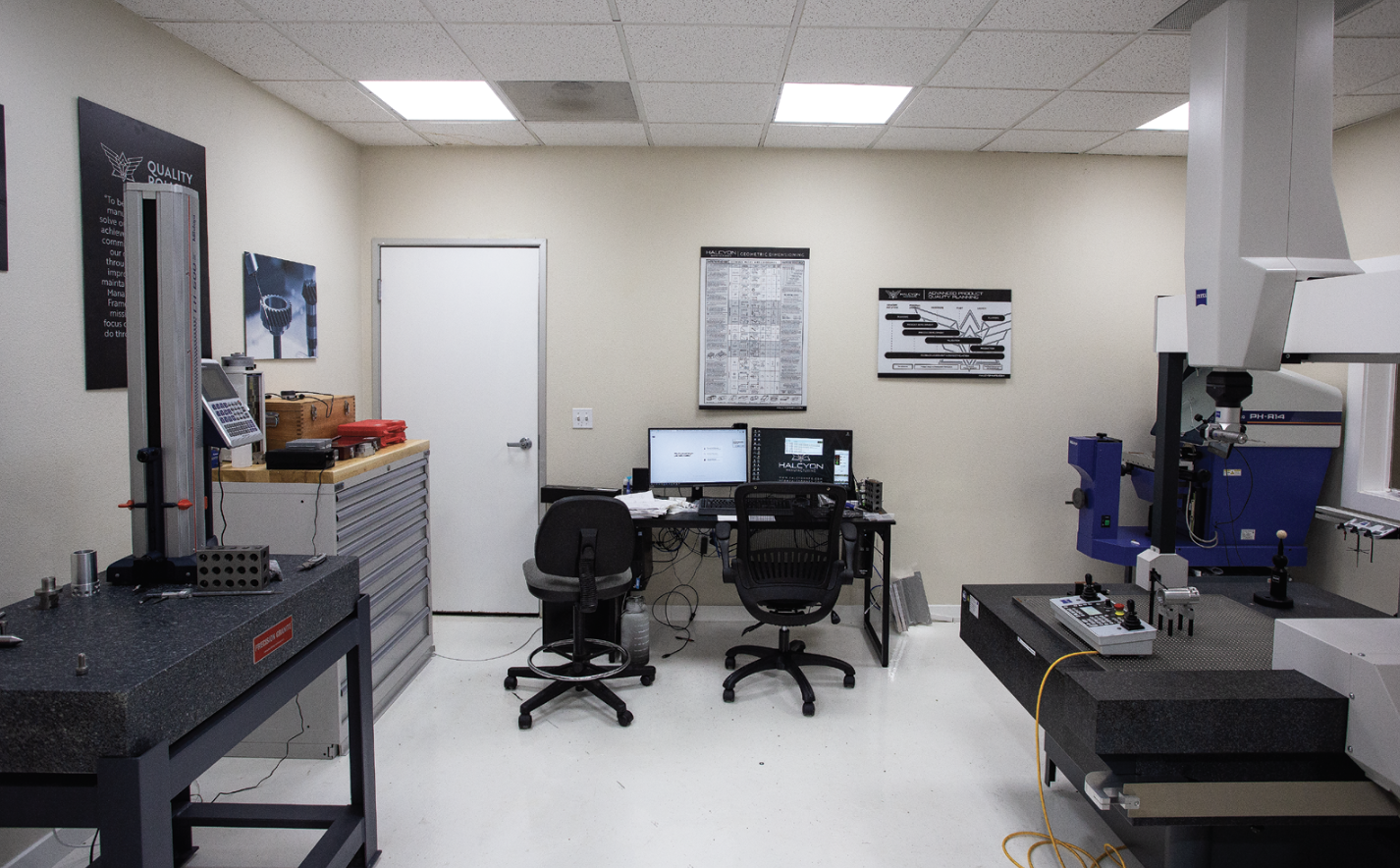 Halcyon Manufacturing became ISO9001 certified right out of the gate. Their quality lab is decked out with a Zeiss CMM, Mitutoyo optical comparator and a Mitutoyo digital height gauge. The shop has multiple sets of measurement tools all company calibrated so employees don’t have to worry about any variances.

Tony had never seen a lathe with a sub spindle and live tooling run before opening Halcyon. Duncan proposed adding a production turning center into for added capabilities. “We knew we needed turning capabilities from the start and it has paid off since,” tells Duncan.  “So, we set our sights on a Doosan lathe for production work. Running unattended for hours at a time is a great way to generate extra revenue,” They needed a machine with advanced machining capabilities that didn’t break the bank. They wanted dual spindles, Y axis, live tooling and milling on the sub spindle. They required a versatile size, hassle free controls, and nuts on accuracy. They found all of that in the Doosan Lynx 2100LSY. “The live tooling and sub spindles were add-ons but let me say how I think the standard conveyer belt system is just cool,” chuckles Duncan. “I know of all the features the simplest one makes me happy. I just like it. It’s the little things like through spindle coolant on the sub spindle, standard. Parts ejector, awesome, standard. Parts delivery conveyer, standard. When it comes to standard features, Doosan has hit it out of the park on their mills and lathes.”

Halcyon is creating a company that is stress free and employees have what they need; a place people want to come to work every day and create. Their plans are big and will take time, but less than a year into the endeavor and they are outpacing their own lofty ambitions. As a noun halcyon it is a bird. As an adjective halcyon is associated with calm, prosperity, and affluence. When used for design, prototype, and production Halcyon Manufacturing is a great source for all your high complexity, tight tolerance, quick turnaround, milling, turning, and 5 axis needs.