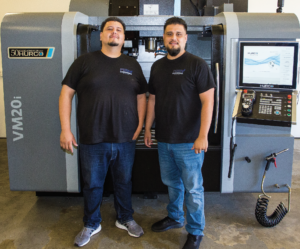 First generation Americans and first time business owners Miguel and Alfredo Acosta looked to Machinery Sales and Hurco when it came time to buy their first and second vertical mills.

Brothers Miguel and Alfredo Acosta are building the American dream at PHES Machining in Riverside, Ca. Driven by their faith, these first- generation Americans are embracing every opportunity to help grow their fledgling business.

The Acosta brothers grew up witnessing hard work firsthand. Their parents both put in long hours to provide a life better than what was possible in Mexico. “Our dad always told us to at least get a short career,” laughs Alfredo Acosta. “Something where you at least go to school and learn something. He’d tell us that jumping from job to job was no way to live, and that as Americans we had an obligation to embrace the opportunities that we had.” They didn’t put a lot of stock in that ideology until their dad got sick and passed away. It was then that they became closer as a family and closer to the church. It wasn’t until Miguel brought up the idea of going to NTMA to Alfredo that they ever thought of CNC machining as a career. “I was working at a furniture manufacturer running a router and my brother was at an injection molding company,” tells Miguel. “He had never seen anything CNC before, so I showed him videos online.” They saw an ad for NTMA in Ontario and went down to check it out. After getting the tour and meeting with an administrator, they both enrolled in the machinist training program. For almost a year they went to school all day and worked 12- hour shifts at night. Sleeping in parking lots before and after school just to catch a few extra winks was the only way they could rest. The sacrifice paid off when they honored their father’s memory and started new careers as CNC machinists.

The Acosta brothers spent the next few years working at a variety of shops absorbing everything they could. Be it programming, or workholding solutions, they pounced on every chance to learn. On paper it appeared that they again were bouncing from job to job, but really it was all part of their plan to gain as much experience in as little time as possible. “Sometimes we worked together,” tells Alfredo. “And sometimes we were apart,” continues Miguel. “We are both fast learners and each job helped us progress in our abilities. Unfortunately, not all workplaces were encouraging us to learn. We both had jobs where pushing the button and unloading parts at the most rapid pace was the only thing that mattered.” For them button pushing was no different than the jobs they had before, and certainly not a career. When they reached a point that advancement was no longer possible, they moved on to a place where it was. “We always knew we wanted to open our own place,” tells Alfredo. “The fear that we didn’t have enough experience constantly held us back. It was always let’s wait and learn this, or no we can learn more about this. Then one day we realized that no one ever stops learning in this business. If we wait until we think we know enough then it might not ever happen.” They wrote a business plan and submitted an application for a small business loan. They never thought they would get be accepted, but they did. On April 1st, 2019 with no customers PHES Machine was open for business. 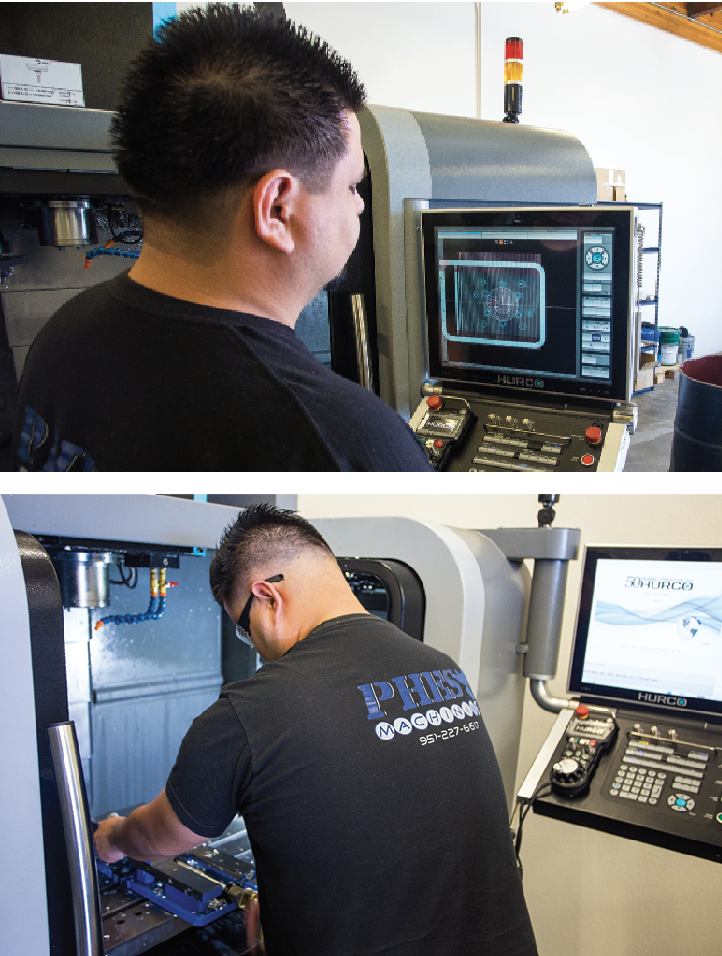 Big brother Miguel Acosta has unofficially claimed the Hurco VM20i as his own. Having a second spindle and a larger work envelope has blown up production and expanded PHES’s capabilities. Alfredo Acosta fell in love with the Hurco controls right away. His brother trained him in WinMax conversational over the phone and now he is a power user.

As new business owners the Acosta brothers faced the age- old question of which machine tool will be the most beneficial and offer the best bang for their buck. With big ideas and a limited budget, they started the search with brands they had experience on like: Doosan, Haas, Kitamura, and Hurco. All excellent options. Ultimately, Hurco won out because Alfredo and Miguel are both skilled in using Hurco’s WinMax conversational to program. “Up until recently I had never run or even seen a Hurco mill,” explains Alfredo. “Miguel was working at a shop that had one and they hired me on for second shift. He said come down early and I will show you how to run it. He gives me five minutes of instruction and takes off. The controls were so easy once I figured out menu placement that he was able to train me over the phone. Honestly, I fell in love with the control and it took me only one day to be proficient. I went from never seeing one before to a life- long fan almost overnight.” “When it came time to decide on what machine to buy for our own business a local machine tool distributor Machinery Sales was one of the first calls,” adds Miguel. “We were interested in Hurco but didn’t know what they cost or what extras came on each model. David Cogswell came out to meet with us. He is VP of sales and brought with him Dave Ahlberg one of his sales engineers. They worked with us everywhere they could to get the VM10i to a price we could manage. We even were able to afford a 12,000 RPM chilled spindle.” The Hurco VM10i is one of Hurco’s best selling machining centers because of the features offered at an entry level price point. The physical footprint of the VM10i is quite small without sacrificing travel. The table is 30”x16” and all axis sit on linear rails for great speed rates across the 26”x16”x20” of travel in X, Y, and Z.

So after getting machines all they needed was work. After hundreds of emails and phone calls in the first few weeks the big break PHES needed came in the form of a local South Bay aerospace facility needing to farm out prototype projects. They were sent two overflowing packets of prints and told to pick the ones they wanted. They wanted them all, but discretion is the better part of valor. “We needed cash to flow in, and delivering jobs is the best way to make that happen,” explains Miguel. “They are so backlogged that they needed any help that they could get, so we cherry picked the ones we could complete the quickest and easiest. Their operations manager lives nearby and came over to check out our operation. He said he has enough work to bury us for the next four years if we were up to it.” He wasn’t joking, PHES is slammed with prototype parts. Every week they get sent packets of prints to pick from. They take as many jobs as they can, but that still leaves them passing on more than they take. “We noticed right away there were a lot of prints that needed a bigger machine than our VM10,” tells Alfredo. “We figured a lot of shops our size would have similar problems, and by having a larger machine we could set ourselves up for more and more growth. It was hard to let all the work go out the door, so next time Dave came in we showed him all the specs on work we were turning down. We joke with Dave a lot about needing more machines and more axis, but this time we seriously needed a larger Hurco.” “Alfredo and Miguel started out better than so many others I’ve seen in this business,” tells   Dave Ahlberg of Machinery Sales. “I called David Cogswell and said we have to find something to help these guys out. A larger table would give them much more flexibility and be a huge asset to a growing company like PHES. Once my boss got involved PHES was able to get into a VM20i. As a sales guy I see a lot of CNC shops, and these guys are really impressive with how far they’ve come in only six months in business. At this rate they are going to run out of space in the shop before they run out of work.”

Miguel and Alfredo picked up a used Yama Seiki lathe not longer after they opened PHES. As milling guys they enlisted in their friend Chris to handle the company’s turning requirements. Chris also lends an experienced hand in quality control when it comes time to check parts off the lathe and mills.

Miguel and Alfredo are still scratching their heads on how all of this came to be. They were able to get their second machine on the floor cutting chips in only two weeks. They got everything they wanted on the VM20i and at a price they could work with. In only a month having the second spindle has made a large impact in productivity for this small operation. Both brothers can now machine larger and smaller parts simultaneously to maximize daily outputs. “We are so blessed to work with Machinery Sales,” concludes Alfredo. “From our perspective they treated our business like it was their own, doing everything they could to help us realize our dream.” “Every part we deliver we want the customer to feel we gave them the highest quality at the best value,” continues Miguel. “We have that same feeling when we buy the Hurco machines.” PHES was named after their church Padre Hijo Espíritu Santo which in English means Father Son Holy Spirit. Afredo and Miguel agree that having God’s name in their name gives them power. “We are guided by God and everyone we’ve met has been a blessing for us. God has put us with the right people and together we are making PHES a success.”