GEARING UP FOR MANUFACTURING – TDC 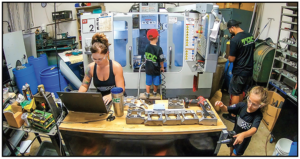 Family is a big part of the manufacturing process at TDC. Joe took over the business from his father and works side by side with his fiancée Sydney. Even the kids get to help when they are not in school. You can never be too young or old to learn about lean manufacturing.

TDC was purchased in 2006 as a way for Empire Karts of Redlands, CA to add to their already impressive lineup of products for 100 mph racing karts. Originally TDC stood for Tom’s Die Cutting and top dead center, but now it’s TDC Manufacturing and there is no one named Tom and they do way more than die cutting. “My family used to own a large kart racing shop,” explains TDC owner and operator Joe Barros. “TDC made die cut stickers, numbers and gaskets along with sprockets aimed at the karting market. So, we filled our shelves with TDC products and sold them nationwide to other kart shops and racers.” The die cutting was done onsite, but they subbed out the manufacturing of the sprockets. Not long after TDC got rolling under the new ownership they were given the news that they had to find a new supplier for the sprockets. Bill Barros, always an entrepreneur and man of action thought that buying a couple CNCs to bring the manufacturing in-house was the best idea. Secretly those around him thought it was just an excuse for him to learn how to run a CNC mill and lathe.

TDC bought a basic Haas CNC VF2 mill and a Haas SL20 lathe. No one had any experience programming, but they were also able to buy from the old shop all the fixtures and programs, so they didn’t have to start from scratch. Fortunately, Bill was familiar with smaller manual machines used in building kart racing engines, so he had an understanding of the core concepts of milling and turning. At the time Joe was called Joey and more interested in racing and pursuing his passion for photography than being a part of any manufacturing. He was young, didn’t really have a plan, but for some reason he started showing up after school to help his dad out. “I was going to college for photography,” explains Joe. “I don’t know why, but after class I’d go see what my dad was making at TDC. It grew on me in a way I never imagined. To take a block of metal and make it into something else was awesome. Instead of destroying these parts on track I was making them, and it was a very satisfying feeling. I obtained a student copy of Solid Works from a friend and really took to it. My dad wasn’t great at it, but the artist in me gravitated to all the features and what I could create. I wanted to learn more, so I went to Valley College and checked out their machining program. I met the reps for Autodesk at a Haas open house and they told me about their free software for students. I started using their CAM software a lot and began designing aftermarket parts for Ruckus scooters like custom foot pegs.” He completed the manual portion of the machining program at Valley and started the CNC classes. He was so far ahead that Joe helped the instructor teach other students how to use the controls and to set up jobs. Instead of having 20 students around one machine, they could split it up ten and ten for more personalized instruction. 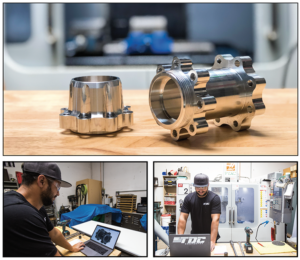 Joe just converted over to using Fusion360 so he can take advantage of their cloud resources. It allows him to seamlessly go between work stations and not worry. He likes that everything is built in and flows together. It is easy to switch between the CAD and CAM and updates sync across both.

Once Joe had the basics down the racer in him began to appear. Speed, he needed more speed. Speed in racing never comes cheap or easily, so he was prepared for the worst. What he found was that he was so far from optimized that even little changes netted him large gains. “Probably the last two years I’ve spent getting faster, getting better tooling, and putting systems in place,” describes Joe. “Something as simple as tooling is so critical to throughput, and I honestly didn’t have any idea. My dad wanted to run high-speed steel tooling because it was cheap, but with a nice carbide end mill I can run 3 times faster and it only costs twice as much. My cycle time on the sprockets has come down so much just by using better tooling.”

Lean manufacturing was a term Joe never heard of before, but it turned out he was utilizing some of the practices and didn’t even know it. When Joe took over TDC it was haphazardly arranged and one of the first things he did was reorganize. “The shop wasn’t set up for manufacturing,” continues Joe. “We had collets right in front of the machine high on a shelf. The holders were around the back and the drills were in another place. The kart shop dad bought in 1999 was his “retirement” and I’m fairly certain that the machine shop he bought in 2006 was his second retirement. He had the mentality that the shop was really just an extension of his garage and as long as the TDC products got done then he was good. He thought I was crazy to buy a large toolbox just to keep all the stuff together and within easy reach. Everything is right there and you don’t have to go anywhere to do a setup. It seemed almost too simple but learning as we go has been fun.”

TDC’s highest quantity product line is their karting sprocket for 219 chains. Sizing starts at a 65 tooth and goes up as high as 89 in one tooth increments. Each one is a different program file, but they all use the same setup and tooling. Karting sprockets are a disposable, high wear item and racers go through a lot of them. “There’s a big variety of karting sprockets in the market,” details Joe. “Ours give the customer a lot more value for only a little bit more money. Our sprockets are CNC machined using domestically sourced USA aluminum. You can feel the difference right away compared to a cheap stamped $5 sprocket from overseas. Because our sprockets are actually round and have the same pitch on each tooth you get much better wear on the sprocket as well as the chain. The life expectancy is dramatically improved. We get customers coming to us who bought brand new stamped products that don’t even fit on the carrier because the die was worn out and no one even noticed. All our sprockets are within .005, which is overkill, but I know that every part that leaves here is a quality sprocket.”

Two of TDC’s best selling products came from the need to improve on what the karting OEM’s were supplying to customers. The TDC billet radiator mount (left) is a vast improvement over the flattened tube style one that comes on the $7000 kart. TDC’s motor mount (right) has a sliding system within the mount. It reduces the bind on the chain and is perfectly aligned. You just slide the top portion with the motor attached to it along the base and tighten at the desired length. So no guesswork.

Joe’s involvement in karting never stopped, and his driver development and chassis-tuning programs are the inspiration for many of TDC’s new product lines. A billet radiator mount for the IAME and ROK karting engines came out of frustration with OEM radiator mounts breaking in the heat of battle. “The factory radiator mounts are junk,” details Joe. “They are round tubing that have been flattened with holes drilled in it for adjustment. It has a couple of weak points that are exacerbated by the weight of the radiator and the vibration of the kart. People think of karts as kid’s toys to drive in the lawn, but as you know they are 100 mph rocket ships that turn 3 g’s and have no suspension. Harmonic vibration alone can kill a poorly designed radiator bracket in one on track session. Our mount is anodized billet aluminum with slots and supports to tackle the roughest track days. When you spend $7000 on a racing kart and a $50 item ends your race weekend it’s a real bummer. Spending a little more on quality products designed to last makes a big difference throughout the race season.”

Growing outside sales and expanding their customer base is the top goal for TDC in 2019. Joe took over the business in January 2018 and since then TDC has become his pride and joy. “Business has been slowing increasing for us,” concludes Joe. “Even though we have our own product lines we are focusing a lot of our growth efforts on being a job shop. Word of mouth is getting us more and more business thanks to happy customers. Our Instagram feed is also a fantastic source for new customers and information. An awesome little CNC machining video gets crazy play online and people reach out to us. I’ve met some really cool people doing amazing things thanks to Instagram and YouTube. I’m really grateful to all of those talented people sharing their knowledge with me. We keep getting better and better and I can’t wait to see what the future holds for TDC.”