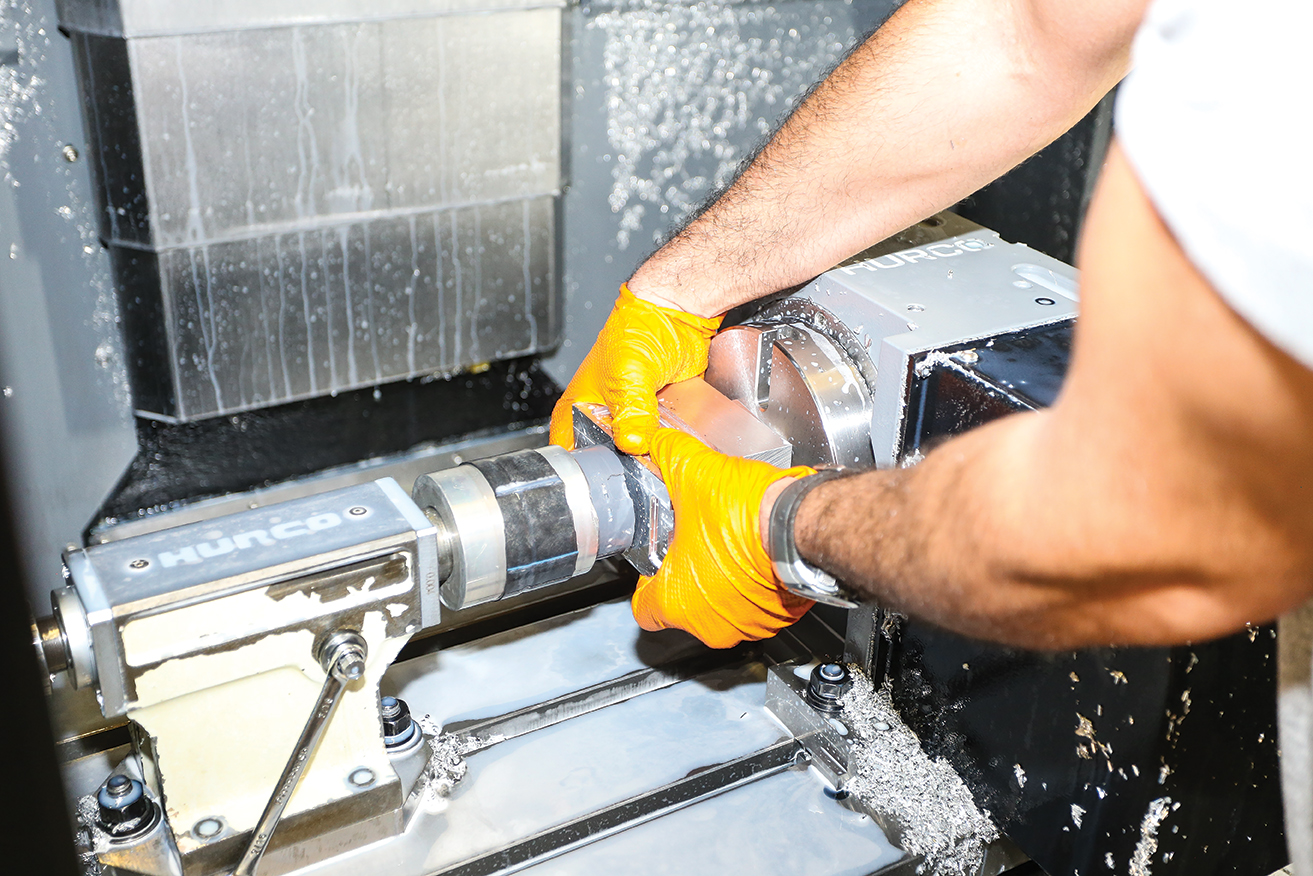 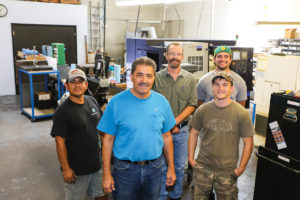 Quality Components, LLC is ready for takeoff. The last six months has owner, Vern McElroy, beaming with excitement over the changes he’s made and what’s still to come for this Denver, Colorado based precision CNC machine shop.

Vern has been a machinist all his life. In 1970, he went to work at the Gates Rubber Company in their machinist apprentice program. “It was back in time when you had to learn to be a machinist,” tells Vern. “No computers to do your job for you, just a calculator and courage.” That philosophy of learning to machine still rings true with Vern. Quality Components has undergone a recent transformation with new employees, new machines and a new outlook on the future.

Vern started Quality Components back in 1988, but he found the challenges of being a businessman and a machinist to be more than he could deal with effectively. “I went out of business only a few years after I started,” explains Vern. “I’m a machinist and needed to learn a few lessons about business. So I took a few years away from machining and drove a school bus. It allowed me to clear my head and reevaluate things. So when I re-opened a few years later I was in a much better place.” Vern built a large shop area at his house and purchased a ProtoTrak mill in 1996, paving the way for his return to the industry he loved. “Jobs came in slowly at first,” describes Vern. “One here and there from people I knew. More people called and I got a lot busier. I used that machine on a lot of prototype work for people and companies in the development stages of their projects. I love prototypes, love seeing things invented, seeing people’s vision before it becomes a reality.”

Vern spent a year and a half in the garage before moving into a shared workspace. “My friend got a contract from Fisher Imaging who handed him a stack of prints to start working on. He needed help and it was a great opportunity to get a larger work area. We were separate companies but shared the building and operating costs.” It seemed as though Quality Components was on its way, but then the tragedy of 9/11 hit. “I had no business for a year. I was the low man in the supply chain and was the first to go for many of my customers. I really thought I was done and would never get QC rolling in the right direction.” Even though companies didn’t seem to be making parts they were developing new ones. The lull in their business was used to create. “That played right to my strengths and business grew again,continues Vern. “The companies I was building prototypes for began to produce product again and I hired my first employee, Jeremy Benner, who worked along with me to build a productive and reliable CNC shop.” Business grew and they moved several times before landing at their current 3500sq.ft. manufacturing facility. In the spring of 2012, Vern hired Christopher Wenglasz to help in the shipping department. “He had never worked in a shop before, but quickly learned what he needed to and began taking charge, eventually becoming project manager.” He learned to program, setup and run the machines.  Chris became the go to guy in the shop.

Quality Components’ customers range from scientific and medical companies to manufacturers of automation systems. They work mostly in aluminum and plastics and rely on versatility to best service their customers. “One of our accounts build a line of laser spectrometers,” explains Vern. “We build and assemble the chassis out of aluminum. When you are using complex lasers to measure, it is imperative that we deliver them a part that meets or exceeds their spec. We are very customer driven and motivated. Everyone says they are, but we know that the part has to be right and on time or it is of little value.” Until recently Vern has kept operations reigned back, ensuring Quality Components can make all their commitments. Recent changes in equipment and employees have opened things up so Quality Components is free to fly without the fear of letting down their customers. 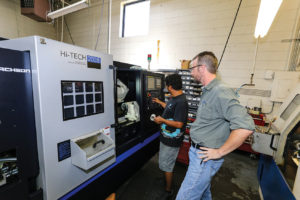 Allan Seglar came on board at Quality Components to be the general manager. He is taking people who fit within the company philosophy and training them to be the machinists that QC needs. It was a revelation for Vern when he decided to have employees that are eager to learn and be innovative.

Over the last few years Vern has made several new machine purchases to boost Quality Components’ adaptability and efficiency. “A shop this size needs to be able to do as much as possible,” tells Vern. “When I buy a new machine it has to be versatile and have more to offer than the machine it replaces.” Vern gets all his new machines from Foothills Machinery Sales, a local Denver based company. “The people at Foothills really seem to understand what it is like to have a small shop,” explains Vern. “They give me good pricing, solid support and distribute a lot of different brands like Hurco and Hwacheon.” Vern just replaced his 12-year-old Hurco with a new 4 axis Hurco VM10. “I wore out my first one after going like hell for 12 years. I liked it so much I got the newer version.” His first machine didn’t have the 4th axis but his second one and now the new one both do. He was unsure at first about needing a 4th axis, but he became an instant fan. “Working with aluminum and plastics the 4th axis has come in handy,” details Vern. “We’ve also become big fans of Hurco’s conversation programming. We can program basic parts right from the controls in 5 minutes.” The 10,000 RPM chilled spindle, and large memory capacity are a few other features that drew Vern’s attention. “I also like that it has a lot of memory and computing power to process the complex new high speed programs. It can look way ahead in the code and take advantage of dynamic and high speed machining processes.”

Vern recently hired Allan Seglar to be Quality Components’ first general manager and mentor to Chris, Carlos Anaya and Daniel Cooley. Relinquishing control of the shop is a big part of Vern’s long term growth “The last year or so we’ve been sorting out the best labor solution for what we do,” explains Vern. “Too many experienced machinists are retiring. So we’ve changed how we do things. We are taking people who fit within the company philosophy and Allan is training them to be the machinists we need.” The industry is losing a lot of craftsmen and Vern feels he is helping not only the company but also the entire industry by training people with a desire to learn. Allan works directly with the three apprentices in the shop. They are hungry for knowledge and eat up the information as fast as he can give it to them. “I like the smallness of the company,” continued Vern. “The personal fit we have here as a group is fantastic. We have people out there with really good attitudes. “Now with Chris, Carlos and Daniel in the shop, and Allan taking care of the training and GM duties,  I can concentrate my efforts on growing the business”.

Growth is a theme when talking to Vern. Right away his plan comes through. “When I decided that I wanted a shop full of machinists eager to learn it was a revelation,” tells Vern. “We get new customers in here all the time and I now can rely on the team to own the project from start to finish.” Vern explains how he has waited a long time to have an experienced machinist with proven managerial skills like Allan come along. A weight has been lifted knowing that everything in the shop is being done right. “The reason I started this business was because I wanted to develop new products,” concludes Vern. “New things intrigue me.” Since they’ve been in business, they pay for the shop, the overhead and the employees by doing production work. What Vern loves is when people come through the door with ideas. “There is not a lot of money to be had on that side of things, but once in a while that idea turns into a reality and it excites me to have been a part of it. You guys picked a good time to come by the shop. I’ve been holding back on making commitments for new work for so long, but now Quality Components is ready to fly.”