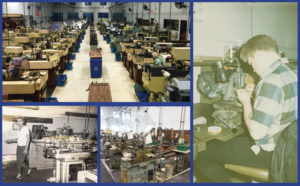 On the outside Swiss Productions Inc. is a highly skilled, high precision screw machine shop producing more than 3.5 million parts a month. Inside, their core strength comes from being a family owned and run business with manufacturing roots dating back more than 5 decades.

Timo Lunceford is Swiss Productions General Manager. He married into the family 28 years ago and is an integral part of the management team driving the business. “The company actually started back in the 60’s,” Timo stated. “It was called WV Enterprises for William and Vera. They got divorced and my wife’s grandpa took half and her grandma took the other. Well, Vera incorporated in 1982 as Swiss Productions Inc. and grandpa went on and eventually phased out of business. Swiss Productions Inc. was named after the automated Swiss screw machines we had back then, and still use today.” Vera’s son, Ken Putman is the company’s president and driving force for getting Swiss where they are today. He started working at Swiss Productions when he was just 16 years old.

Today, the Ventura, Ca. based outfit has a 25,000 sq.ft. custom designed manufacturing center. It houses more than 50 CNC and manual machining centers. Entire departments are dedicated to assembly, deburring, tooling, and quality control. “My Father-in-law Ken Putman and uncle, Sr. VP., Richard Petrash, built this company on the backs of pre war era screw machines,” explains Timo. “Our Bechler cam machines have patent dates of 1931 and 1932. They spent a lot of time during WW2 making parts for the military, but were originally designed to make components for Swiss watches. When I started 28 years ago about 90% of our machines were the Bechlers. We had nearly 20 of them.” The cams are engineered in a 360-degree radius that shapes the part. All the cams are manufactured in-house to match each job. The nine machines that we have left of the Bechlers, run non-stop every day with a single operator loading a bar every 20 minutes. They churn out 750-800 parts per hour and over 2 million every month. “The part running on them right now is a washer for an aerospace company,” explains Timo. “There is not a machine in the world that can touch the speed and accuracy on those Bechlers. We hold +/- .001 tolerance on every dimension, ID, OD, and length. We run the spindles at 3000 RPM to save the equipment, but they can run at 5-8000 RPM if we needed them to. All our CNC operators are trained on the Bechlers to help them become better machinists because you can’t cheat on a machine like this. You need to really know how to machine and make your tooling rather than just making offsets to fix it. Our people are the best because they do more than button push, they machine.” 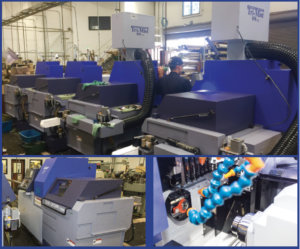 Swiss Productions is in the process of updating their fleet of Star Swiss turning centers. Currently they have more than 37 machines ranging in size and capabilities. They recently added four brand new Star SB-20’s to replace six aging machines. They hope to add four more in 2018. The new machines are yielding tremendous gains in production over the machines they replaced. Swiss Productions has been a fan of the Japanese manufacturer many years. They love having continuity between all the machines to make it easier on operators.

Grandma Vera was an early adapter to the CNC. She and her son, Ken Putman, always believed in technology and hiring the right people to understand it. Swiss Productions’ CNC machine shop department is made up of all Star machines and two HAAS Chuckers with a 2.5” machining capability. In all they have 37 of them ranging in age, size and capabilities. “The Star Machines really shine for us,” details Timo. “We have a combination of different models ranging from RNC-16s, SNC-15 and 25’s along with our SR-32’s, SR-20’s and SR-16’s, which have back and side working milling attachments. Most of the machines are set up with anywhere from 10 to 15 tools depending on the part and model of the machine.” They purchase all of their new Star machines from Jeff Nyman of Nyman Machinery. Swiss Productions is in the process of updating a few of the older machines, taking delivery this year of four new Star SB-20’s. The dated machines run max out at 5000-6000 RPM, but Swiss Productions slow them down to preserve the spindles and the bearings. Their new SB-20’s run at 10,000 RPM without breaking a sweat. “We’ve replaced six machines this year with the SB-20’s, and are looking to possibly add four more next year,” details Timo. “Production gains have been through the roof with the new Stars.” He gave an example where one part would take 30 seconds to run the first operation and then it would have to go to our secondary dept. for a counter bore and deburring. That entire process took just under 3 minutes a part, but with the new Star SB-20’s, machining it now takes 35 seconds to run, and it drops off COMPLETE. “We produce 300,000 pieces of that type of part every year and have done so for the past ten years. We love the reliability and the precision from the Star machines. They are not cheap, but I consider them to be a great value. We purchased the first few CNC Star machines in the early 80’s and fell in love with the machines. Today all of our CNC Screw machines have Fanuc controls because the continuity between the machines is important to us. It allows our operators to bounce from machine to machine easily, using the same controls and codes.

Swiss Productions machines a variety of metals and alloys, but specializes in Teflon, PEEK, CTFE and other plastics. Timo tells how they are holding +/- .0005 on a Teflon syringe tip with the diameter of the part being held at .0195 with an ID hole of .0095. Swiss Productions is recognized as one of the premier screw machine shops on the west coast, and not just because of the sheer volume of parts produced. “It’s true we can manufacture a lot of parts,” explains Timo. “Many shops are content with making just the part, but here at Swiss Productions we offer complete service. Not only can we just machine a part, but we have the ability to add value to our customers and potential customers with syringe, needle and tubing assemblies. We ship to top medical companies from around the world.” Swiss Productions has found that their ability and willingness to tackle the toughest parts gains them an advantage over the competition. When other manufactures might shy away from a complex part with tight tolerances and a ton of features, Swiss Productions eats them up. “We run multiple parts with 60+ dimensions on one print,” touts Timo. “It could take the standard machine shops quality dept. two hours to check that part, but we have continued to improve the process and now have it down to under 30 minutes. We tend to get the jobs that no one else wants” 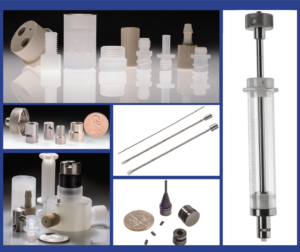 Swiss Productions services many industries, but medical is their largest. They manufacture and assemble: syringe, valve and pump components, trach’s, ferrules, connectors, needle and tubing assemblies. They manufacture for top medical companies around the world, shipping globally to customers in Europe, Australia, North America and Singapore.

Swiss Productions is a 100% family owned and operated business. They have aunts, uncles, son in laws, even husband and wife teams. One third of their 42-person work force is family, but all the others are treated as if they are blood related. “We have a very low to zero turnover on employees,” describes Timo. “The average employee has been with us 10-30+ years. We treat our people well and it pays off in production.” Years ago management made a big investment geared towards employees being able to spend more time with their families. Swiss Productions went to a four-day work week for everyone. They run two 10-hour shifts Monday through Thursday. “We work hard and have three day weekends every week,” continues Timo. “It helps promote a less stress free work environment and the employees get to spend more time with their families. Everyone knows their job and does it.”

Timo transitioned from the shop foreman to general manager 7 years ago. You might find him supporting sales or scheduling production, but everything they do at Swiss Productions is done as a company. All of the management team wear many hats and contribute where needed. “I started in 1990 sweeping floors and changing bars,” tells Timo. “In those days we worked six days a week and 14-16 hours a day at times. We did that for about 7 years to build the business up to where it is now. One of our first big customers was Trompeter Electronics out of Westlake Village. President, Ken Putman was knocking on doors trying to drum up business in the early days of Swiss. He kept going back over and over and they finally gave him a shot at a single part. It wasn’t a huge order, but it was an order. The part ended up running bad and he spent the next few days redoing all the parts to complete the order and get it to the customer – ON TIME.” Trompeter Electronics became their largest customer for more than 15 years. Ken’s determination to make it right for the customer is what they pride themselves on to this day. “We produce 3.5 million parts a month with less than a 1% rejection rate,” concludes Timo. “I’m the general manager, but I’m not everyone’s boss. The VP of the company is not the boss. Our customers are our bosses. They are our number one priority now and always.”