Faith in the Unknown Pays Off at Bob Lewis Machine

Bob Lewis Machine began in 1973 as a one-man operation out of a garage in Torrance, Ca. Bob, AKA “Pops” would churn out thousands of parts from a tiny workspace. Bob Lewis Machine has come a long way since those garage days. With 5 axis milling and multi turret lathes, the AS9100 and ISO9001 certified shop is a trusted supplier to the most respected names in aerospace.

Pops’ big break came when Hughes Aircraft contracted with him to start manufacturing a family of parts. He opened an actual shop in Gardena, and then moved to a larger location in the mid 80’s. “We moved here in 1986,” tells Jeff Lewis, Bob’s son and current president at Bob Lewis Machine. “I’ve been with the company since I was 6 years old. Pops had my sisters and I in a manufacturing assembly line. He would get in an order for 1000 parts and one of us would drill it, the next kid would tap it. My older sister got the most complex jobs, apparently an 8-year-old was more skilled than a 6-year-old. You can image by the time I was done with high school I had enough of machining business and went out to do other things. I quit a few times, got fired a couple times, but it was all I knew growing up. I did everything from being a DJ to a deck hand on fishing boats, but ultimately I came back to work for him and took over the business when Pops retired in 2001.” 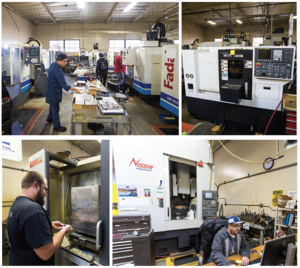 Bob Lewis Machine has a wide variety of milling and turning centers ranging from 5 axis mills to compact turning centers. Brands like Chevalier, Nissin, Kiwa, Fadal and Hyundai make up the milling department while Mori, Okuma, Hyundai and Hitatchi get the job done in turning.

Bob Lewis Machine (BLM) specializes in high precision prototype work for the aerospace industry. They machine mostly out of titanium and aluminum, but also work with copper and the exotic nickel bases super alloys like Inconel. The majority of parts produced are under the size of a softball, and a standard run might be only a few pieces. Business has been on an upswing the last few years and Jeff has taken the opportunity to invest in new equipment. In the last year Jeff purchased a new Hyundai WAI KF5600 3 axis mill, a Hyundai WAI E160a compact turning center and a Chevalier QP5X-400 5 axis mill. “We replaced a couple older machines with new ones,” explains Marcelo, head programmer and floor manager at BLM. “Our milling department has five Fadals, the new Hyundai, the new Chevalier 5 axis, a Nissin 5 axis, and a Kiwa horizontal. Turning has the new Hyundai, an Okuma, a Mori and a Hitachi. We are going more and more towards pallet systems and 5th axis machining. Our horizontal Kiwa has two pallets and there are half a dozen jobs he is setting up on it right now. Even though we are not a production driven shop, the ability to work offline while the machine is still cutting is paramount. It never stops running. We can switch between jobs if we need to because so many are set up on the pallets.” 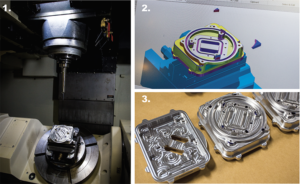 1 – The C axis on the Chevalier can cut and rotate the spindle at the same time for true 5 axis performance. 2 – Bob Lewis Machine’s programmers use FeatureCam simulation on every machine. 3 – This part went from 3 setups down to only two, but it has a callout of .001 true position and is very tough to hold.

Reducing setups has been a priority ever since they added their first 5 axis Nissin in 2011. Jobs that took six or seven setups are now only taking one. It made a huge difference in how parts were produced. “We came to grips with the benefits of 5 axis machining a few years ago,” tells Marcelo. “Fewer setups reduce the interaction with the operators, minimizing the opportunity to make mistakes. With the tolerances we hold all it takes is a little error loading a part to make a huge impact. A single setup is a great thing. Since all the features are being machined in one pass it has allowed our operators to run multiple machines during the longer cycler times.” BLM’s newest acquisition is a Chevalier QP5X-400 5 axis mill that they worked with NuTech Machinery in Ontario to purchase. It was bought right off the Chevalier showroom floor in Santa Fe Springs, CA. and been in production for just over a year. “I’ve noticed over the last few years the Korean and Taiwanese machines have really stepped up their game,” describes Jeff.   “The machines are smarter and everyone is raising the bar. They offer a great bang for your buck. Chevalier is known mostly for their grinding and 3 axis machines. The 5 axis was a new product line for them. It was the first unit sold on the west coast, if not in the USA. It is hard to sell a new machine when there are no others out running in shops for us to see, and admittedly we were skeptical. I sent Marcelo down multiple times to feed it code and check things out.”

Jeff freely admits that price was a driving factor in choosing the Chevalier over competitors, but the deciding point was the commitment and faith that Chevalier had in their own product. “The QP5X-400 has a lot of features and capabilities,” touts Jeff. “If it lived up to the hype, and if it delivered on the promises, I knew I would be a very happy customer. Chevalier was confident in their machine and they really stepped up by increasing the length of the warranty. It doesn’t cost them anything if the machine doesn’t have any issues, but it was a great piece of mind for me the consumer. That’s when I pulled the trigger. A little over one year in and we’ve had no issues with it. Beautiful parts come off it on a daily basis and the post sale support has been fantastic.” 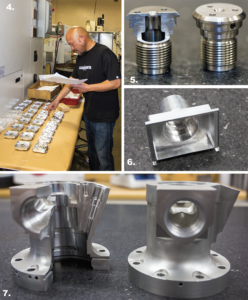 4 – Jeff Lewis is the second generation owner at Bob Lewis Machine. It is hard to believe that he has over 40 year of maching experience at BLM. 5 – Inconel Material, .014” diameter holes with .050” interrupted counterbores with a true position of.001. 6 – Aluminum Material, .006” +/- .001” thin walls, all around. 7 – Aluminum Material, Precision Valve Body with multiple, precision, cross holes. Precision Bores, +/-.0003. True position held within .001. This was done in 2 setups, using the Chevalier.

As a demo model the Chevalier QP5X-400 came fully loaded with a high speed/high torque spindle, a laser measuring system, upgraded Fanuc controls, coolant through the spindle and much more. “We typically don’t buy a machine with all of the bells and whistles,” explains Marcelo. “Having all these features has been great. Most of the extras are geared towards speed and accuracy while machining harder materials. The spindle runs at 10,000 rpm and has crazy kinds of torque behind it. It has a torque meter that measures the load in real time, and it doesn’t even move when I’m getting after it on a titanium part. We noticed right away how good the finish is off the Chevalier. That has a lot to do with the strength of your spindle. A weaker spindle will give you vibrations and a much worst finish. Especially in harder metals.”

The C axis can cut and rotate simultaneously, allowing for flawless round surfaces. “Round parts off the Chevalier are fantastic,” jokes Marcelo. “More than once Jeff has had to confirm we ran it on the mill and not a lathe. It is that good.” Surprisingly one of the most noted attributes outside of speed and accuracy is the coolant skimmer and recovery system. It filters out all the Waylube and keeps the coolant fresh. The machine has been running non-stop for a year and all BLM has done is top off the coolant. “The coolant system is something we probably wouldn’t have ordered if we built the machine from scratch,” tells Marcelo. “We don’t have it on any of our other machining centers, but really like having it now on the Chevalier.” As the head programmer Marcelo loves having the higher end Fanuc control with 525 megs of memory. Their other 5 axis machine only has 128 and they wish it had more. “All our programs on the 5 axis are large and complex,” describes Marcelo. “They take up a lot of memory. With only 128 megs we can’t load a full program into the control, but with 525 we can. It isn’t a huge issue by any means, but again just a nice bonus that comes with a higher end control.”

“Trust is a big deal,” describes Marcelo. “I trust that once I get my first article that the machine is going to do exactly what I want, exactly the same way, with the exact same precision. Part 10 is exactly the same as part 1. The repeatability is amazing, it inspires so much confidence in what we do.” “I feel we took a chance on the unknown and it paid off for us,” concludes Jeff. “It was a big commitment for us adding a second 5 axis machine. We are very happy with the service and support we’ve received and still impressed with the quality of parts the Chevalier is capable of producing.”