When Graydon Udelhoven founded Forbidn Manufacturing (Billings, Montana) in 2012, he chose its name to signify a company that could develop and machine products so outstanding, and of such seemingly unattainable quality, they would be considered virtually “forbidden” to be received by anyone. Udelhoven had earlier spent two years studying for his mechanical engineering degree but dropped out because he couldn’t wait to put the newest technological advancements to work. He designed a high-performance turbo engine for his pickup and raced a diesel truck on the Diesel TV network. Later, he decided to put his unique talents in design, modeling, and manufacturing to work by founding Forbidn Manufacturing. He purchased a Mazak VTC300 vertical machining center that he uses to produce a wide range of parts for the oil field, mining and automotive industries.

A few years after Forbidn’s establishment, a producer of pavement marking solutions asked Udelhoven to assist in designing a part for a spray gun. Udelhoven built a prototype that featured significant performance improvements. The company asked Udelhoven to quickly ramp up production of the part so it could be incorporated into a new product. The part is prismatic, with complex features on all six sides that must be held to close tolerances. Producing the part on the VTC300 would have required setting up the part six times to sequentially expose each side for machining. It would have taken about seven hours of setup and machining, plus one hour of deburring, to produce just a single part.

Udelhoven decided to invest in a Mazak Integrex i200s 7-axis multi-tasking machine, which is capable of producing the part in a single setup. It does this by clamping the part in the spindle, rotating it to expose different sides to the milling head, then transferring the part to the sub-spindle so the side that was originally clamped could be machined. Udelhoven purchased the machine from Smith Machinery Co., which also provided training and other assistance in getting the new machine up and running. Then Udelhoven was presented with the challenge of programming the new machine.

“With ESPRIT, I was immediately able to access all seven machine axes and produce G-code that worked the first time,” Udelhoven said.  “Our company does not sell any software, but we told Graydon that in our experience of selling many multi-tasking machines, the only software we have seen that works right out of the box is ESPRIT,” said Klaus Lassig, sales engineer for Smith Machinery.

“I noticed very quickly that vibration, harmonics, and rigidity were going to be my most difficult challenges with this part. For the greatest accuracy, I needed to clamp the part in the turning spindle as close as possible to the tooling, resulting in very tight clearances between the spindle and tooling,” Udelhoven said. “But having just invested a large amount of money into the Integrex, I wanted to protect my investment by ensuring that tools did not crash into the machine. ESPRIT simulation lets me see exactly where the tool is in relation to the machine, so I have complete confidence in my programs. There are points on the part program that are so close to a collision that I never would have taken the risk with my previous software. For example, at one point in the program, a 5-axis Swarf move has .035” clearance between the top of the B-axis head and the automatic tool changer cover.” 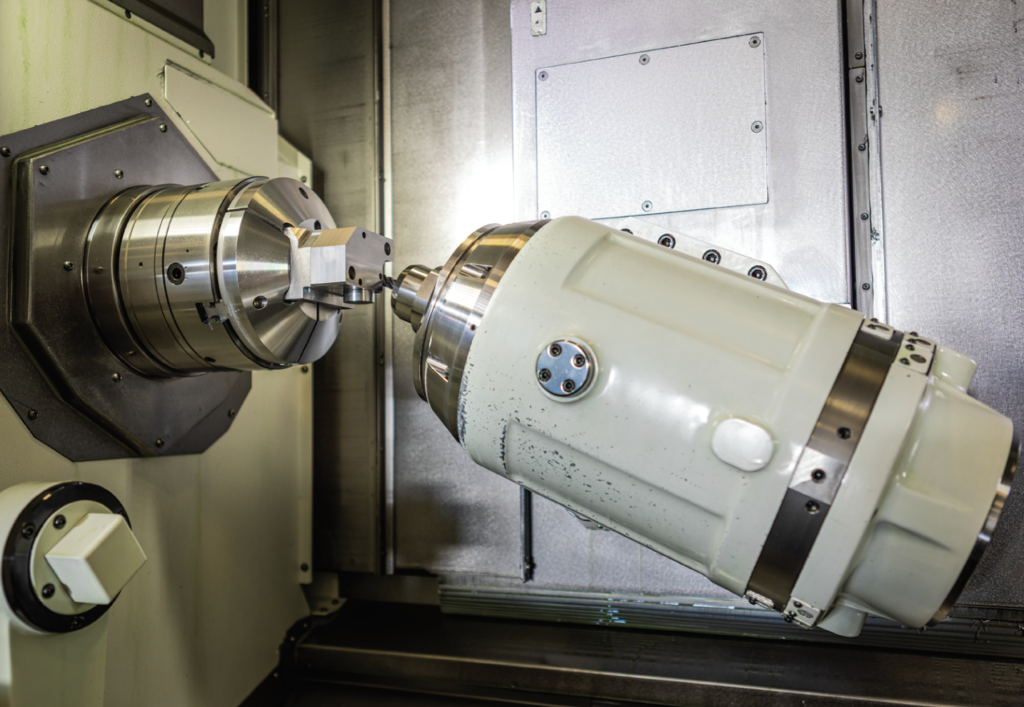 Each part is produced from a 5.5-inch long piece of 2-3/8-inch diameter bar stock. Instead of using a turning tool to separate each part, the program uses a milling head to travel back and forth across the part to trim it off. The milling operation improves part rigidity and process security. Udelhoven’s program further improves rigidity by performing minimal semi-roughing operations to expose the tight tolerance drilling and milling faces before final rough and finish milling operations to maximize the rigidity and ensure accuracy of the part during these sensitive operations.

Due to the complexity of the part and the number of hours needed to program multiple operations, having ESPRIT’s post processors produce edit-free G-code was also paramount to Forbidn’s success. In addition, the ESPRIT deburring cycle helped triple productivity, cutting the cycle time down from a total of eight hours to only two for its most complex part.

“Now that I have gained experience in using ESPRIT, I have never been happier with a product,” Udelhoven said. “If I can think of the machine moving a certain way, ESPRIT can produce exactly what I am thinking. It has given my business an advantage in my area. I recommend looking no further than ESPRIT with a multi-tasking machine.”