Since 1984 DKW Precision Machining Inc. has lived by the motto “Do as you say – Say as you do.” Rivaling companies five times their size, their “quality overrides everything” attitude earns them customers in the competitive Northern California manufacturing arena. Brothers Doug (D) and Kurt (K) Franklin took out a loan from their father Wayne (W) to open DKW in a rented San Jose, Ca. garage. Manufacturing medical and lighting parts, they quickly added guys and machines, outgrowing the garage and several buildings along the way. Since 2001 they have called home a 10,500sq.ft. manufacturing center in Manteca, CA. 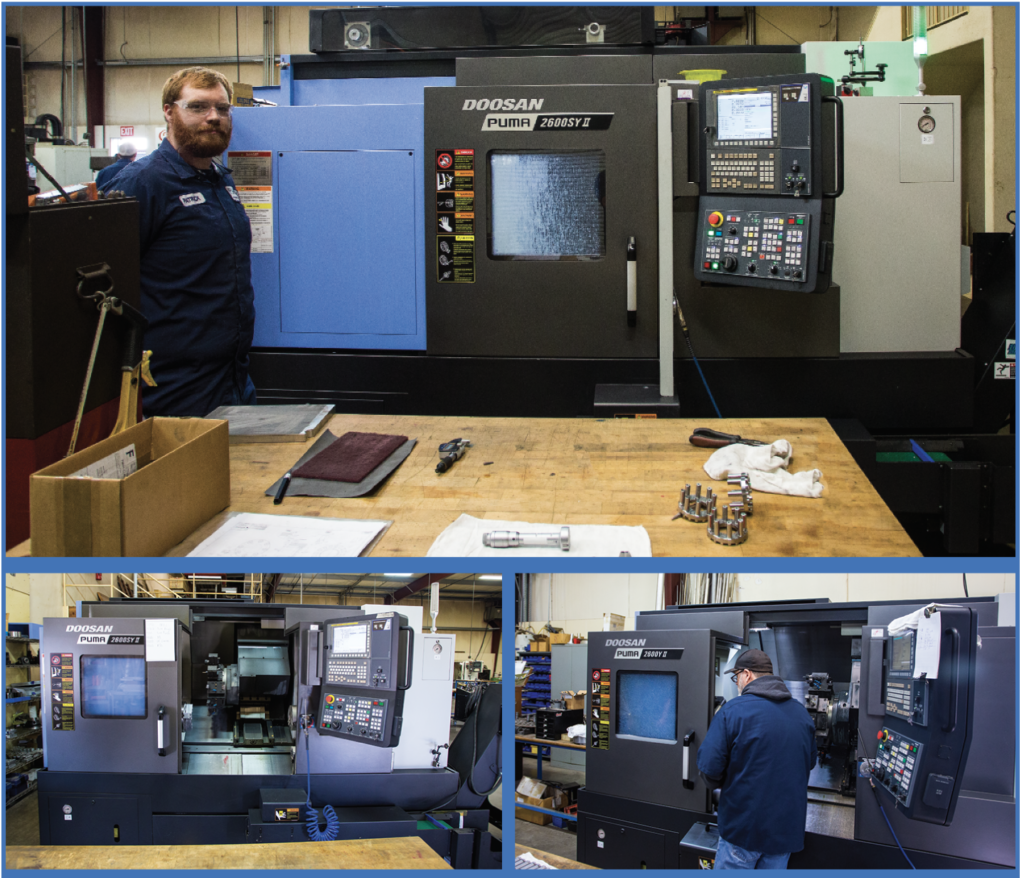 Brian Kott is DKW’s general manager. He joined the company back in 1994 as a delivery driver and is one of a handful of employees not- blood related. “It’s a big family here,” tells Brian. “All but one person has been with the company for decades or is part of the Franklin family. Doug was bought out by Kurt in 2015 but his sons Clint and Kiel are key members of the team as well as Kurt’s son Jason. They are all bad ass machinists just like their dads.” 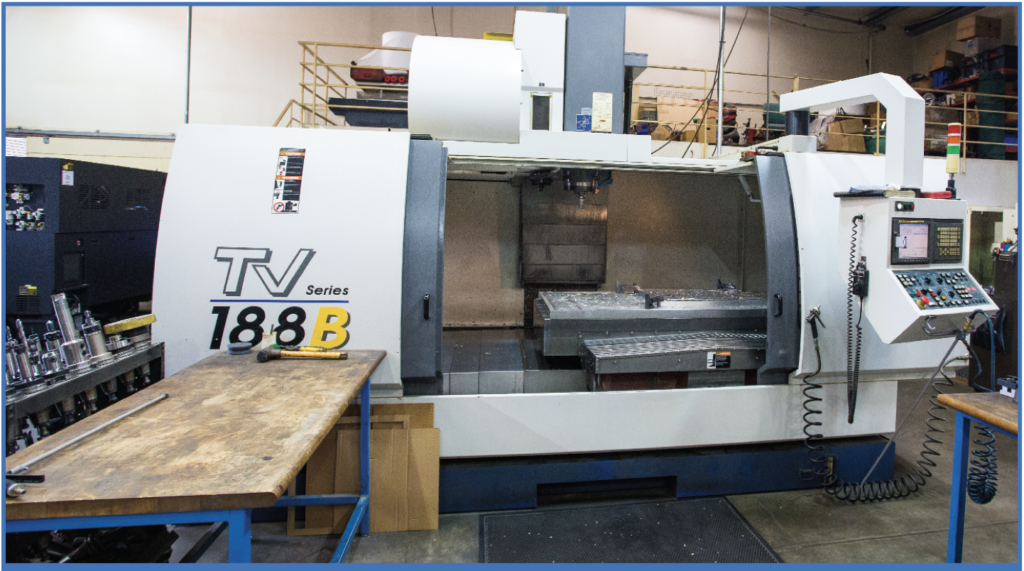 The milling department consists of a Doosan DMN 500II, a YCM TV188B, a Jupiter VMC 4022 and a pair of Fadal VMC 4020’s. The lathe department is made up of all Doosan turning centers, a Puma 200 and three Doosan Puma 2600SY. “To build a good part you have to start with a good piece of equipment,” explains Brian. “We are known as a shop that can handle tight tolerances and hard to cut materials. That requires a tougher machine. Since day one Doug and Kurt wanted robust machines and that still holds true.”

DKW set themselves apart from other shops of similar size by not having standard milling and turning equipment. The YCM TV188B is a beast of a machine for this size shop. “In 08 like everyone else we were struggling with the economy and looking for ways to improve our sales,” explains Brian. “I was thinking a lot about parts being made in China and I thought what if instead of focusing on smaller items that can easily and cheaply be transported, we went bigger. A big heavy piece of stainless is less likely to be sent overseas for manufacturing. So, I proposed that we buy a larger mill, way bigger than our 40 x 20 Fadal mills. Doug said if I sold a job for it then he would buy one. I was not quoting jobs in the Y 26”, 30”, and 32” range. We wanted as much Y as we could afford and the YCM has 70” x 34” x 31” range.” It’s a 50-taper machine with direct drive that spins at 10,000 RPM.” They got it in 2009 and it quickly became their flagship machine and runs almost nonstop 12 years later. “We’ve been so happy with the live tooling in our lathe department that Kurt wanted to apply these same advanced machining principles back into our milling department,” continues Brian. “A Doosan DVF 5000 5th axis mill will be on the floor by the time this goes to print. We are really excited to take the step into 5th axis machining.”

When you live by “quality overrides everything” it is important to have Keyence and Brown & Sharpe backing you up in the quality lab.

“We bought three new live tooling / sub spindle Doosan lathes in the last few years from Brandon Takata at Ellison Technologies,” tells Brian. “The triplets as we call them are all Doosan Puma 2600SY and buying them has been one of the best things we’ve ever done. I run the shop and sales and can tell you firsthand that they are game changers for us. Brandon came in as a cold call, and the old man liked him right away. He’s young, but has an old school attitude where customer service is still king. He sold us on the Puma 2600SY machines, and we got a great deal. It was like nothing we had on the floor. It is robust, has a good size bore, had everything we wanted and more. We liked it so much we added a second one the next year and our third one came aboard last summer. The Ellison guys did a great job on install, not even a pandemic slowed them down. We were up and running very quickly.” All three machines are decked out with a few different features, but the core machining properties are all the same. They are all 10” chucks, 4000 RPM, and 30 HP. After proving out the technology on the first machine, integrating more of the same machine was critical. “Redundancy was important,” continues Brian. “Ease of use, the interchangeable parts, interchangeable tooling, programming, and having everything the same makes for a seamless addition to the workflow. The last thing anyone wants is to invest a ton of money into a machine tool and struggle getting it up and running. Having the triplets allows us to move jobs around freely. We are used to multi op parts and most still require a change over, but with the 8” sub spindle and milling tools we have reduced the number of times we handle the parts. The Pumas increased productivity and improved our quality.”

Surrounded by companies that only want to slam out 1000’s of bits of aluminum, DKW has found their niche with tight tolerance, high complexity parts machined from exotic materials. “We started out like every job shop running whatever’s necessary,” details Brian. “It was never our goal to focus on short runs of 50-100 parts, but that’s where we’ve landed. A lot of that stems from the work we do for TechnipFMC Schilling Robotics division. As you can imagine they don’t make hundreds of thousands of ROV’s, but the ones they do build require the best of the best in manufacturing. It’s a whole different game 13,000 feet deep in the Mariana Trench and their quality requirements reflect it. When they call out a spec there is no question that the part needs to be that good. Sometimes a customer will call out a spec that you know is overkill and that they have no way of actually verifying it, but that isn’t the case with TechnipFMC. TechnipFMC  means business and verify what they get, making us a much better shop in the process.” If the adage of “a rising tide raises all boats” is true, then in the case at DKW those boats are getting amazing parts thanks to DKW’s decade long partnership with TechnipFMC. “Every part we deliver for TechnipFMC comes with an outside process cert, certificate of conformance, material cert, and first article report,” explains Brian. “The first article report defines that part and defines us as a shop. We take great pride in our work and our reputation.”

Buying a machine tool is easy, but Brian is quick to credit the talented people who make the magic happen. “We’ve built a great team over the years, and the team out in the shop deliver for us every day,” concludes Brian. “We give them the impossible and they find a way to get it done, making us all look good. We are nothing without each other, but our “quality overrides everything” approach is what makes us successful. Kurt is very much a guy who believes in the investment of time and equipment as well as persistence. Spend the time teaching our people and the next time they will know, and we all become better for it. Our theory has always been that if you make a correct part, that looks great, and service the hell out of the customer you hold an advantage over most shops.”