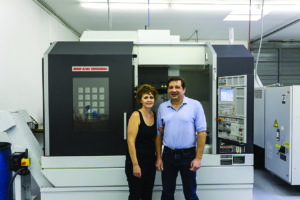 Right – Tina and Kevin Sanchez have built a reputation for precision. They partner with top of the line manufacturers like Mori Seiki, Mazak and Zeiss who share the same reputation.

The husband and wife team of Kevin and Tina Sanchez own and run Diversified Tooling Corp. in Albuquerque, New Mexico. Kevin was born and raised in Albuquerque, while Tina arrived in the land of enchantment with her parents when she was 11 years old. Neither family came from a machining background; and after 25 years of marriage their parents still don’t know exactly what it is that they do.

Kevin found his way to machining because he needed a job and Tina stumbled upon it because of a special guy. Together, they fell in love with the each other and the industry. “I started at a local shop sweeping floors,” tells Kevin. “I progressed from sweeper to big green button pusher, and on from there.” His experience continued to grow and he was doing setups, programming and eventually landed as the shop’s quality manager. He jokes that he became quality manager because no one else wanted the job, but you can tell right away this man loves precision and it was a job he was born to do. “There are not a lot of pure quality guys out there because the number of job openings is limited,” explains Kevin. “If the shop has 40 machinists the might have one or two guys dedicated to quality. It is a rare skillset and you don’t find many shop owners with my background.”

Tina learned the trade by watching Kevin and working at the same shop after school, but in 1994 they ventured out on their own to a small industrial unit with a single Sodick wire EDM machine. There were very few companies in the Albuquerque area that offered wire EDM back in the early 90’s. It was a good niche to start a company with instead of buying a mill or lathe and competing with everyone else doing the same thing. Diversified has evolved a lot since then with Tina now piloting the company from the front office instead of in the shop with Kevin. “I used to run the machines with Kevin when it was just the two of us,” explains Tina. “Now I handle everything but the machining. I manage all the material ordering, scheduling, and customer service while Kevin is busy manning the QC department and running the manufacturing.” Their 6500 sq.ft. manufacturing facility houses state of the art milling, turning, EDM and QC with a current staff of six.

Diversified Tooling’s forte is tight tolerance prototype and short run production. They do a lot of R & D for the defense industry in alloys such as aluminum, stainless, Invar and Kovar. “The Invars and Kovars are similar to stainless,” explains Kevin. “They are  specialty metals that not everyone is experienced in machining.” With less susceptibility to thermal expansion these alloys are used frequently by industries that utilize lasers and similar technologies. If you shoot a laser really far a little bit of change has a big effect. These alloys don’t expand as much so keeping a tighter tolerance is made easier. Diversified is in on the ground floor of the design phase when their customer starts to R & D whatever it is they need. “There are several defense contractors in the area like Sandia Labs, Los Alamos, Air Force Research Laboratory, and Starfire Optical Range,” tells Kevin. “These local companies are doing everything from solar to defense. Half of what we do we can’t even talk about.” Many of the projects the Diversified team works on have never been done before. Through a close working relationship between themselves and the customer’s engineering squad they are able to produce a final product that not only functions, but meets every spec, and can be produced cost effectively. 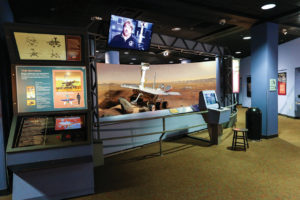 There is a great sense of community in Albuquerque, New Mexico and many different local companies got behind a Mars Rover replica project for the Natural History Museum. Diversified’s involvement came via the local SME (Society of Manufacturing Engineers) when the original concept included wood, Styrofoam and PVC pipe as material. “We instantly wanted to take part in the project, but those materials are not what we do. More and more local manufacturing companies came on board and the group was able to make something really special for the museum.” Diversified called dibs on making the six rover wheels as well as a few less cool looking parts. Their prototype wheel is still in the office and gets passed around to local schools. The Mars Rover went on tour for a few seasons, but is now back at in its permanent home at the Natural History Museum right next door to famed Old Town Albuquerque.

Everyone in the shop has the ability to do everything, but they all have unique skill sets that help them excel in certain areas. Dean Smith is the primary mill guy. He does all the programming and setup on the ultra fast and super accurate Mazak FJV-250 and Mori Seiki DuraVertical 5100 vertical machining centers. Since Diversified does mostly prototype work they don’t have a lot of parts loading and unloading. If they manufacture 30 of something it is considered a large run. “Nothing runs for days, weeks or months here,” tells Kevin. “That’s the way we like it, it’s our niche. People who make thousands of parts are really good at making thousands of parts. If someone comes to us for 1000 parts we are not cost effective. Our mentality is not in that kind of manufacturing.”

Diversified Tooling fell into the business of prototype style work by default. As a quality guy Kevin is very meticulous, and that doesn’t lend itself to running thousands of commodity parts. If a part doesn’t pass spec, or is even close to not passing it never leaves the shop, no exceptions. “I think the fact that I’m so picky about hitting all the marks we built our customer base up with similar desires,” explains Kevin. “Factory automation tooling was how we started out, and that is almost the same as what we do now, just in a different industry.” Their customers will have a product coming on line and need the fixture to make that happen. There is more concern about timing, and perfection than with cost. This falls right in the hands of Diversified’s expertise. “Our customers want a perfect part that hits every mark. That kind of quality comes at a price because it takes longer. We have customers who want 100% of everything checked on a part. It can be as many as 500 dimensional checks on each part. That’s where our Zeiss Contura G2 comes in.”

“We’ve had our Zeiss for a couple years now,” tells Tina. “Kevin just loves everything about it.” They upgraded from an older manual CMM and Kevin describes using it vs. the Zeiss as a 286 processer vs. a new I7 Pentium machine. Purchased through Todd Johnson of Total Quality Systems in Phoenix, Az. Kevin was attracted to the G2 because of its accuracy. With an overall working area of 700mm x 1000mm the Zeiss holds .8 microns on all axis anywhere in the volume. It is even more accurate when looking at just a single axis. Almost every part manufactured by Diversified starts out as a solid model, and they program the Zeiss from that model. “Programming off the solid model isn’t unique to Zeiss, but I find it to be easier on the Zeiss than on some of the other machines I’ve used,” conveys Kevin. “It is pretty much point and click. You have to put in the tolerances of course, but if you have 100 checks with the same spec or checking strategy it is straightforward to copy and paste. You don’t have to go item by item and type it all in over and over and that saves me time.” Diversified ordered the Contura G2 with the highly accurate VAST XT head. The VAST head’s accuracy comes from using fixed probes at any angle instead of swiveling. “Admittedly it is a little less convenient,” pronounces Kevin. “But for us it is worth it because we are not checking thousands of parts. If you were a big 5 axis shop then a swivel head would be the way to go, but in our line of work pure accuracy is king. We can always add a swivel style probe down the line if that is something we ever need.”

With a reputation for accuracy, Diversified Tooling relies on the skills of their employees and equipment suppliers who share the same reputation. “We strive to be the best at what we do,” concludes Tina. “Our customers demand the utmost is precision that is only attainable by using top of the line manufacturers like Mori Seiki, Mazak and Zeiss. The difference in quality is obvious to us, and to our customers.”