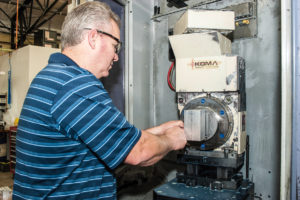 Wolcott customizes the programs to achieve the speeds and feeds he desired which often involved pushing the machines as far as they could go.
He described the speeds as “staggering”.

Bob Wolcott is familiar with competition. A member of the 1995 “Refuse to Lose” Seattle Mariners baseball team, the retired major league pitcher (he also pitched for the Arizona Diamondbacks and the Boston Red Sox) went on to study mechanical engineering at Oregon State after a shoulder injury forced him to hang up his glove for good. He then started his own design, analysis, and fabrication company and set out to find customers who needed high-precision parts in low-volume quantities. Wolcott Design Services (Newberg, OR) has made it a practice to continually analyze their work processes in order to ensure they are fulfilling the customer’s needs while still remaining profitable. When it looked like they were weaker in the profitability department, Bob and his team decided to try to push their three Makino horizontal milling machines as hard as they could, to see if they could improve productivity—and profits. Here is how they did it.

Making the Program His Own

Wolcott Design Services is a four-man shop that specializes in design and manufacturing of prototypes, molds, and other high-precision parts such as orthopedic tools for the medical industry, as well as racing components. The molds range in size from about the size of a shoebox to the size of a thumbnail. Job sizes range from 10 to 1000 on average. After one particular small-run project involving a part machined from heat-treated steel, Wolcott realized that he broke numerous tools while trying to run the machines faster to save time, causing him to not only lose time, but also money. “There were parts where you’d remove 90 percent of the material with a big end mill and the last 10 percent would have to be done with a tiny end mill,” said Wolcott of the more intricate designs. The routine post-production analysis led Wolcott to explore the toolpath functions of his CAM software, Mastercam® by CNC Software, Inc. in an effort to speed up the process without breaking tools.

Wolcott realized that he could program custom toolpaths using Dynamic Motion strategies that machined the parts wicked fast, removing materials at high rates of speed using the entire length of the tool, minimizing air cutting, and allowing intricate designs to be cut. “With the toolpaths, you can do all of the removal work with the big tool and then create a stock model that’s driven off that, then use that stock model to drive the next tool at 100 percent efficiency instead of machining a lot of air,” said Wolcott. He was able to machine waterlines, scallops, and other specific geometries using one toolpath because the proprietary intelligent algorithms in the software were able to detect material conditions, adjusting the tool position so that it remained in constant contact with the material. As for the machining speed, Wolcott adjusted the programs to achieve the speeds he desired, which often involved pushing the machines as fast as they could go. “I was able to configure the software and integrate it to the machine at such a high level. We can go into the machine definitions and tweak the parameters so that the software is outputting the code exactly how the machine likes it,” said Wolcott. He utilized Mastercam features such as miscellaneous integers as switches to control processes at the program level on an operation by operation basis. Examples of this are tool break detection routines and whether the machine is set to roughing, standard, or finishing mode. He also utilized custom drill cycles to allow programming specific probing routines designed for 5-axis operations. These allow for probing and setting dynamic fixture offsets or tool center point control Fanuc parameters on the fly. “The degree of custom configurability seems endless,” said Wolcott.

Wolcott also took the time and effort to customize his Tool Library accurately so that each tool has one specific tool number which consists of the tool, tool holder, and stick up combination regardless of which machine it is running on. Additionally, Wolcott streamlined the mold programming process using stock models. This allows for importing the new CAD file and simply reselecting new geometry for a few operations which takes around 90 seconds for the roughing toolpaths. Once toolpath regeneration is complete, the roughing, rest roughing, and second rest roughing are done and the mold is ready for finishing toolpaths.

The Dynamic high speed toolpaths have allowed Wolcott to reduce the cycle time on certain production parts from 80 minutes to 24 minutes by running the cutting tools at a constant load. “The speed at which we could run without breaking tools was just staggering. I had no idea it would be so fast,” he said. He expected the tools to break much sooner in the cycle, considering how fast they were running with steel at Rockwell 50C. “With aluminum, we are limited by how fast the machines can physically move, and sometimes I’m afraid they are going to shake themselves apart.” Makino’s tool life monitoring function allows the machine to move on to the next tool when the original becomes worn down, allowing for very stable processes.

The Dynamic toolpaths’ ability to efficiently remove material allows more flexibility when machining intricate geometries. Using one large piece of steel is often easier than breaking it up and machining multiple pieces that bolt together. “I’d rather make one part and hog out the material than making multiple parts and bolting them together,” said Wolcott. “When we are designing and making molds, the projected cycle time impacts how we go about designing the tool. We’ll produce a mold with fewer parts and better overall accuracy as a result because we’re not worried about material removal and how long it’s going to take.” The ultimate goal, according to Wolcott, is to have accuracy limited by the machine, not the production process itself.

Custom probing routines that were written by Wolcott himself are integrated by modifying the post processor and custom drill parameters. Their efficiency is evident when heat-related problems arise due to machining parts with tight tolerances or in multi-axis operations. Custom probing routines were developed to find the location of the machine’s rotating axes and adjust the parameters to compensate for the shifts. They are further customized per job. Other routines probe a tooling ball, perform the roughing, re-probe the same tooling ball, reset the parameters, perform semi-finishing, and then re-probe the tooling ball again, reset the parameters, and perform the final finishing. It’s all part of Wolcott’s custom features written into custom drill cycles and posted by the post processor. “They are huge time savers,” he said. “They just make it a lot more efficient and it’s all integrated into the program so once it’s done and set, you don’t have to worry about how many edits you make after you post the program. It’s all as seamless and bulletproof as a tapping drill cycle.”

Like watching films of the last game, Wolcott studies every program when a new order comes in to evaluate how newer technologies might help speed up the manufacturing process. By taking full control of his manufacturing processes, from bidding to delivery of the final product, Wolcott has been able to integrate his routine into the CAM platform and customize it in such a way that he can push his machines to their fullest potential, tightening the level of integration between the software and the machine. His willingness to explore the full capabilities of his capital investments has resulted in time and material savings, which he has passed on to his customers with more competitive pricing and faster delivery.