The older, but lesser known city of Everett, Washington sits just north of its more famous neighbor, Seattle. It’s a hotbed of manufacturing for companies wanting to be close to the game without paying the price to be in the city center. Advanced Designs 5000sq.ft. manufacturing facility, is in Everett for just that reason. “We’ve been in this building now for 5 years, since 2011,” tells president and owner Bill Hodo. “The company was started in Seattle by Richard and Kathy Frisk back in 1989. My cousin was married to the founder and owner,” describes Bill. “In 1998 I wanted to get out of the lumber industry and he hired me on. I didn’t have any experience in machining parts, but it was an opportunity to start a new career that I gladly took. Unfortunately, soon after I started he was diagnosed with cancer and passed away later that year. Bill and the employees in place kept the company running for several years. In 2002 Bill and his wife Cheryl bought the company from his cousin.

Since then we have moved twice and doubled our size, adding machines and people. We have a dozen employees and nearly that many CNC lathes and mills. While Cheryl handles all of the accounting, finance and personnel, Bill and longtime employee Rich Svaglic share the other managerial duties. Rich, a lifelong machinist and Bill, a transplant from the lumber industry have found a balance of each of their skills. The duo has been at the helm of Advanced Designs well before Bill became the owner. Rich has been with the company since 1990 and has the title ‘Man of Many Hats’. “I’ve pretty much done every job here,” explains Rich. “Currently I’m focusing a lot of my efforts on Quality Assurance as we work towards our AS certification”. Bill credits Rich with the company’s success “If it wasn’t for Rich there would be no Advanced Designs. He has the technical experience that allowed my family to buy the company, and continuously expand and improve the business. You don’t have to be a machinist or technical guy to own a machine shop, but you sure better have good people on staff that are. Rich makes me look good and doesn’t want any part of what I do. We are paired perfectly.”

Advanced Designs is on an upswing and making capital investments that will strengthen their position in the marketplace for years to come. They consider themselves a job shop, with several Haas verticals and a 4 axis Toyoda. “We have lately been buying more and more mill-turn machines,” comments Bill. “Some of the newer machines are in addition to what we already have, while others replace older or less useful machining centers.” Advanced Designs has been adding more Swiss turning into the mix as well. The advantages of loading a bar and watching finished parts come out the other end is very appealing right now. It beats loading parts in and out of mills, so a lot of our expansion focus is aimed at turning. “We feed it raw material and finished parts start coming out the parts catcher kind of like a slot machine,” jokes Bill.

Advanced Designs latest acquisition is a Ganesh Cyclone 32cs turning center that they added to meet a specific need. It has offered a great balance between traditional and Swiss turning. The Ganesh 32cs has a main and sub spindle like a Swiss machine but doesn’t use a guide bushing. It can run the front and back simultaneously, has plenty of tooling and a large interior work area. Rich first saw the Ganesh 32cs back in 2000, “The 32cs has evolved over time, but is still the same platform that it started as”. “It has a good track record over a lot of years and provides many advantages of a Swiss machine without some of the hassle of using only ground material and the waste of leftover rems. Of course you can’t make a super long part like you could on our Star or Tsugami Swiss, but we had a different kind of part in mind when we bought it.”

That opportunity arose from visiting a local machine tool show. “We were checking out the machines in the Ganesh booth, when Derek Stanton from Ganesh came up to us and asked if we were ready to buy one”. We half -jokingly said we would if they would take one of our lathes in on trade. The next day Derek was out taking photos of it and got us basically the price we wanted in trade.” “Rich saw a lot of potential in the Ganesh,” continues Bill. “Admittedly I didn’t at first. I unfairly discounted it because I wasn’t familiar enough with the brand. Once I saw it at the show we were sold.” Bill ordered the 32cs packaged with a bar feeder and PartMaker software, and kicks himself for not getting one sooner.

Advanced Designs services a variety of industries including medical, aerospace, electronics and security hardware. The lion’s share of work they do is aerospace, but the specific part they wanted to run on the Ganesh is an injection molded medical connector. “We machine a lot of parts that are injection molded and need to be finished,” explains Bill. “They can’t get close enough in their process to meet the spec, so we come in and machine it.” Typical run quantities are 40-50 thousand per order so an efficient process is crucial to meet the customers delivery time. One of Rich’s many skills is fixturing. He built a quick release style loader mounted to the turret that held and loaded a dozen of the connectors, when they were running the part on their Mori and Okuma mill-turn machines. “Our efficiency was not great before the Ganesh,” elaborates Rich. “By no means is it a reflection on the Mori, just this part didn’t work on it as we had hoped. Once we got the Ganesh installed and running my sole purpose was to design and build a better mouse trap so to speak.” 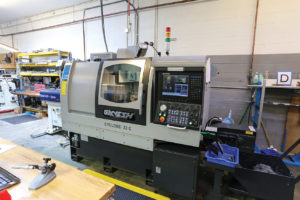 Advanced Designs was initially drawn to the Ganesh 32cs because of its versatility. It has a twin spindle setup that allows for simultaneous machining of both the front and back side of the part and has no guide bushing. They feel it has a lot of benefits associated with Swiss style turning machines. They purchased a package that included a bar feeder and PartMaker software for the entire shop.

Rich came up with a parts loading system utilizing a chain like conveyor that runs in a non-stop loop. The connectors are loaded by hand from the left side of the machine directly into the conveyor system. The parts index to the loader where they are inserted by an air cylinder into the gripper mounted on the tool slide, then transfer the part to get clamped in the main side spindle collet. The m-code activated loading chain holds 36 pieces and never stops. You keep placing parts into the loader and finished parts keep dropping into the standard Ganesh parts conveyor belt and collect in the finished parts basket outside the machine on the right hand side. “The machine never has to stop,” says Rich. “There is no more down time to load parts. The standard Ganesh air nozzles and chip conveyor keep down time for cleaning to a minimum. Part loading is synchronized during sub side machining. Run times were reduced by more than 60% and completely eliminated load time.” The Ganesh 32cs was designed around doing bar work, but Advanced Designs utilization of the machine drew attention from Ganesh. “They were surprised to see how we had the machine setup to run the parts,” tells Bill. “Seeing their machine modified for continuous single part operation was something they had never seen before. They were very supportive from the get go and service has been great. I’d add another machine in a second. Ganesh is a great value.”

Advanced Designs has a customers’ first philosophy. At the root of it, is the never ending commitment to improving their manufacturing processes. “Sometimes we buy a new machine, other times we rethink work holding and setups,” explains Bill. “By being efficient on the manufacturing of a part, we keep the customer happy and continue to expand our company.” Over the last few years Advanced Designs has put an emphasis on hiring skilled employees. “When we started our ISO certification process we looked at the company as a whole and where we could make improvements to get us to where we wanted to be,” details Rich. “One of the biggest changes for us is having our employees be committed to the teamwork required to obtain our quality certification. We received ISO9001:2008 certification a few years back and now set our sights on the new AS standard for next year.” Like so many companies of their size Advanced Designs was reluctant at first to spend the time and money on quality. Now those practices are second nature and are an added value to all their customers. “A lot of what we do here keeps us competitive in this industry,” concludes Bill. “Rich leads the way on what machines we need and why, and I figure out how to make it work financially. The rest of the workers here make the production and quality happen. We really are a fantastic team and together make Advanced Designs successful.”