Between budget constraints, student perception challenges, and the COVID-19 pandemic, Redmond High School Panther Tech has overcome numerous hurdles since March 2020. Dan Kernion is the Manufacturing/CTE instructor at the CTE (Career Technical Education) program of Redmond High School, located 144 miles southeast of Portland. For nine years, he has taught students to use CAD/CAM software and CNC machining to prepare them for careers in manufacturing.

Kernion has been using Mastercam® CAD/CAM software since the 1990s, when he honed his skills designing, programming, and making surfboards and guitars. He credits industry partners such as Mastercam for helping Panther Tech maintain and grow its manufacturing program.

“Between Mastercam and SOLIDWORKS®, that’s $5400 a year for the program,” he said. “Having the support of local industry—which provides materials, tooling, and plant tours—allows kids to see what we can actually do.”

Left – Guitar body machined by Redmond High Panther Tech students. Left Middle – Student created cornhole boards, designed, programmed, and machined in Mastercam. Right Middle – Each Redmond High student first machined a Turner’s cube on a manual mill to square the block, then programmed circular toolpaths in Mastercam and machined the cube on a Haas Mini Mill. Right – Bullet boxes produced by Panther Tech students were machined on a Haas mill; Mastercam Dynamic Milling was used for pocketing and for the hinges. Contour and Engrave toolpaths were used to machine words on lids; and Chamfer and Model Chamfer toolpaths softened the edges.

The manufacturing program is no doubt a proven success. In 2019, the Redmond High School Panther Tech team won a gold medal at the 55th Annual SkillsUSA State Championships. The state champs went on to Louisville, KY, to compete at the SkillsUSA National Conference and finished 13th overall. Despite the event’s 2020 cancellation, the Panther Tech team’s hopes for future competitions remain high. According to Kernion, to attend the national level of the SkillsUSA Championships, he and his students must raise $10,000 for the trip, plus acquire tooling, coolant, and aluminum. Industry partners donate what they can to support the team, which usually competes in both automated and additive manufacturing. The impact of local support on the technical program cannot be overstated. Even the instructor pitches in. For class projects, Kernion has been known to supply wood he has stored from his days in guitar manufacturing.

“Being in the guitar industry for so long, my garage is full of exotic wood,” he said. “I give it to the students if they have a project to do.”

In addition to receiving support for the SkillsUSA competitions, the Panther Tech program receives donations and grants. In May, it received a $15,000 Gene Haas Foundation scholarship that will help eligible students with college tuition expenses. Like many other institutions, Redmond High School Panther Tech took a hit during 2020 when coronavirus shut down the school. Hands-on learning came to an abrupt halt.

“We had done the Haas certification,” Kernion recalled. “I had the kids all the way through the entire program and a representative from our Haas Factory Outlet was to come out and give the final exam. And then COVID happened. So, I had kids waiting to take the final exam.”

Before the pandemic, Kernion would start his classes with the basics, introducing students to the interface and tools. Over the last eight years, he has approached introductory classes with the assumption that his students do not know much about manufacturing. He soon discovered that assigning projects that appeal to his young proteges is key in building—and keeping—their interest. Class projects for beginners include creating dominoes and dice which require students to machine six sides of a part, quite an advanced process for a budding machinist. Kernion described how one student made a tricky-triangle peg game.

“She drew and programmed it in Mastercam, and machined it on our Haas Mini Mill,” he said. “It was made of 6061 aluminum alloy. The student used OptiRough to rough out the triangle and eliminate the surrounding material and cleaned it up with a couple of contour passes to get the deflection out because we went full depth – maybe 1 1/8-inch in depth.”

The Dynamic OptiRough toolpath is ideal for any machinist, including a novice, because the simplified, consistent toolpath replaces multiple, less advanced toolpaths and cuts programming time. The easy-to-use roughing strategy allows programmers to create powerful, safe, and efficient programs for an entire part. Optimized cutting conditions reduce the chance of tool breakage and the need to stop machining for extra set-ups, so cycle times are drastically reduced. Advanced students work on more elaborate projects including ukuleles. The students built their own tooling so they can continue working on their ukuleles at home. CAD/CAM software was used in other student projects such as cornhole boards and a coffee table with built-in cribbage board cup holders and a laser-cut image. Both projects were designed, programmed, and machined in Mastercam, then saved as DXF files to be loaded into the laser software. Other classes built electric guitars and made tools for some of the program’s industry partners. For example, they produced fork clamps for a local motorcycle mechanic.

Perhaps the most complex items created by Panther Tech students were bullet boxes for the Redmond Veterans of Foreign Wars Post 4108. Each two-piece, rectangular part included barrel hinges. Special engraved versions with inlays and challenge coins were created for a local World War II veteran and Medal of Honor recipient and his family members. The boxes were machined from 6061 aluminum on a Haas Mini Mill; Dynamic Milling was used for pocketing and the hinges. Contour and Engrave toolpaths machined the words “Duty, Honor, Country” on the box lids while Chamfer and Model Chamfer toolpaths softened all edges.

“It turned out absolutely amazing,” said Kernion. “It’s a cool little box. It’s simple in a lot of ways but getting that coin to fit inside of the lid and outside of the lid—the tolerances had to be there. For high school students, I thought it was impressive.”

To pique the interest of his students, Kernion assigns some projects from the TITANS of CNC (Flower Mound, TX) website, which offers hundreds of free online CAD/CAM courses. He has students study sections of National Institute of Metalworking Skills (NIMS), Fairfax, VA, testing and learn the ins and outs of SOLIDWORKS 3D CAD design software. Also, he prepares students to take the CWSA (Certified SOLIDWORKS Associate) exam.

“That’s typically their final in my CAD and manufacturing classes,” he said. “I have the only three high school students in the state of Oregon that passed the professional level in SOLIDWORKS.” 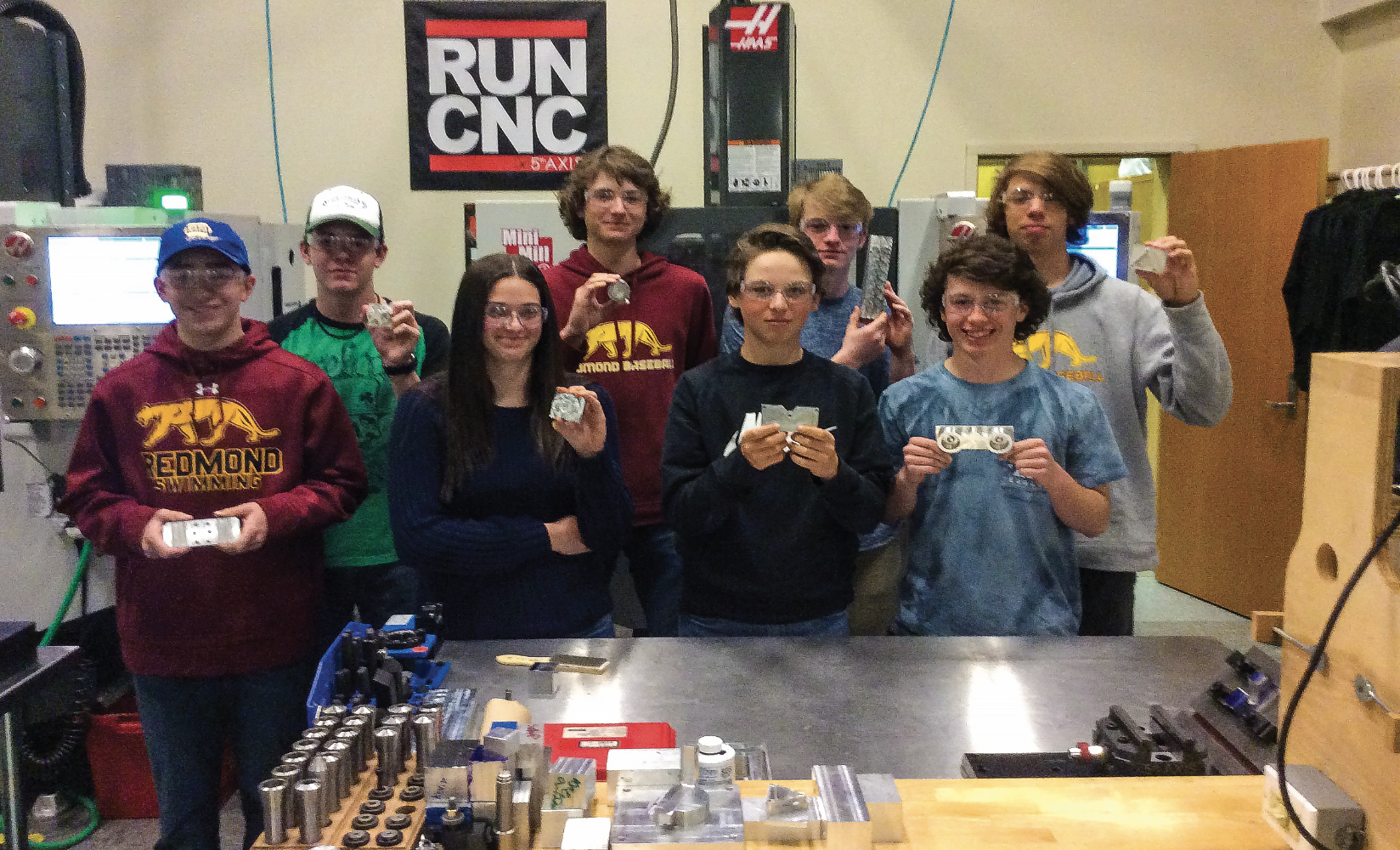 Redmond Panther Tech currently has 28 seats of Mastercam and hopes to add more to accommodate its growing manufacturing program. Kernion uses the Educational Suite, which includes bundled, discounted CAD/CAM solutions that provide instructors the flexibility to teach everything from introductory lessons to advanced CAM techniques. In the coming school year, Kernion hopes to focus on Mastercam Certification. Resuming traditional learning is something that instructors across the globe look forward to this year. When COVID hit, teaching manufacturing classes remotely became difficult, reflected Kernion.

“We had kids remoting in with their Chromebooks,” he said. “It was a very slow, arduous task to get them anywhere. They’d draw a line, and the spinning icon would come out, waiting for the line to be created. Then they would enter their dimensions and the whole thing would spin again.”

But thanks to a new SOLIDWORKS platform, 3D EXPERIENCE, Mastercam performance on the students’ computers improved. It was still slow, but it worked, Kernion said. He estimates that his classes completed 40 percent of the curriculum with online teaching. Though virtual learning presents its challenges, some students excelled in online learning.

“We did have go-getters in Mastercam making it work remotely,” said Kernion. “If they were motivated, they could do the projects virtually and simulate machining. There’s no sound; no tools breaking. But it at least got them started learning the interface, and about post processors and toolpaths. They saw the results of their work in front of them on the computer screen, but it was very slow.”

Once they were able to return to school, some students had to juggle manufacturing projects with year-end exams. Many arrived at 6 a.m. and met with Kernion to complete their projects.

“It was pretty neat to see how excited they were, that they would show up at that time of morning to get this done,” he said.

Despite the growth of its program, a major obstacle to Redmond High School Panther Tech’s success is student perception of manufacturing. According to Kernion, the word “manufacturing” may scare some students away.

“They’re not educated about what manufacturing is nowadays” he said. “When I was a kid, you knew it was a dirty job. Now these companies have labs that are like medical facilities, but students don’t have that initial impression. I try to educate my students and tell them that a manufacturing job is not a dirty job anymore. These machines are enclosed.”

He also hopes educating and training school counselors and administrators will help direct students to his department.