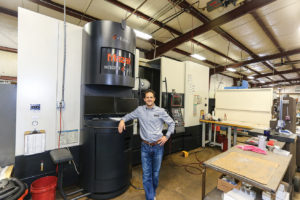 Bogue Machine Company Inc. incorporated in 1969 as a one man tool and die shop. Today, they are a 30,000sq.ft. ISO 9001 and ITAR certified diversified manufacturing company specializing in aerospace precision for a variety of industries. Bogue Machine Company (BMC) came from very humble beginnings when Bob Bogue packed up his family in Pennsylvania and headed west. They stopped off in Albuquerque on their way to California and never left. Bogue was established as a three person garage shop in support of the two locally based national laboratories; Los Alamos and Sandia Labs. The company ran down that manufacturing path until the early 80s, about the same time Bob hired his son Mark.

“I spent my childhood being exposed to the shop,” explains Mark Bogue, president of Bogue Machine Company. “But once I graduated high school I wanted nothing to do with the company and joined the Coast Guard for four years.” The opportunities offered at that time by the military didn’t coincide with what Mark wanted to be as a “grown up.” So he went back to work at his dad’s shop sweeping floors and began his apprenticeship for $5 an hour; not much when you are supporting a wife and two kids. Long hours, long days and long weeks paid off and Mark’s abilities and dedication to the trade grew. By the 90’s he was buying ownership in the company from his dad, and together with his wife they formed a partnership to purchase a 10,000 sq.ft. building near by. “I had to go to my dad and say this is what I want to do. As a young man sitting before your father is a nervous thing, but we all had money on the line and it solidified in his mind that I was serious about the future of Bogue Machine Company.”

Diversification was one of the first steps to fill the empty floor space of what seemed like a giant building. By taking on more commercial clients they experienced a growth cycle that had them buying one or two new machines every year, hiring someone to run them, then filling them with work. “We were an early adopter of technology,” details Mark. “CNC wasn’t as prevalent then so having a shop full of above average CNC machines gave us a competitive advantage. Many of our rivals were still all manual shops, so we were able to provide products and services not available from other companies in our city, or even in the state.” That advantage still exists with two buildings filled with 25+ state of the art Mazak and Mori Seiki multi axis machining centers.

As the business grew Mark knew he needed a partner. Last year, after a three year search, Mark added Andrew Hisey as a partner and vice president. It is an interesting pairing on paper, but one that will see BMC continue to evolve and grow for years to come. “Mark and I complement each other really well,” describes Andrew. “I don’t know how to run the machines, but Mark is a fantastic machinist. He is teaching me about the technical side of the business, while I bring different business practices to the table like: lean thinking, operational efficiencies, sales, and marketing. We both have different backgrounds that led each other to the same place, with the same common goals.”

Andrew is a native of Albuquerque, but he left to earn a degree in marketing and business at the University of Arizona. He eventually found his way back home, but with successful stopovers in Mooresville, North Carolina and Los Angeles, California. “Recently I came back to the area after helping lead the marketing department for Penske Racing and heading up a group of high performance automotive parts brands for their parent company, a global diversified manufacturing business. The company made everything from injection molded plastic products to wiring and connectors for the space shuttle, so I am familiar with manufacturing.” What he didn’t know is that his search to buy into a company would land him at BMC. “I knew Mark’s lawyer and he kept telling me you need to meet Mark and look at this business. I had targeted businesses with a strong brand in manufacturing and Bogue was just what I was looking for. Mark bought it from his dad, and I’m buying it from him over the next couple years.”

The majority of Bogue’s customers fall under the label of aerospace and defense, but they have a much more diverse customer base today than they did just five years ago. “We are pretty evenly split between government-supported customers and what we call commercial customers,” describes Andrew. “We’ve taken our reputation for precision and applied that into other commercial areas which value our aerospace manufacturing practices.” One such customer is the world leader in water blasting tools. Bogue began making tools and accessories for them over twenty years go. Tools might include a tip that connects to the end of a hose and blasts water at 40,000 psi. With that kind of force they require it to be exact, and exact is what Bogue is known for.

New Mexico’s economy in general is very dependent on government spending. They have two national laps that generate a lot of jobs and spending that filters through the state’s economy. They also have a fair amount of oil and gas in the state. If you don’t want to rise and fall on the whim of congress passing a budget you have to diversify. Bogue accepted the ebb and flow of the industry for many years, but now they are pulling the sales handle and selling what they are good at. “We’ve identified industries that are on the rise, and that appreciate our core competencies,” tells Andrew. “I’m really pleased by the work we do for the DOE and through blue-chip customers like Raytheon and Honeywell, but we want to expand what we do into commercial aerospace and alternative energies. Companies like Boeing, Airbus, Bombardier can’t build production lines fast enough and offer a great opportunity for companies like ours who have a reputation for precision and quality. We have a solid foundation in oil and gas, but solar and wind are exploding and not subject to the same kind of market pressures that the other two are. I’d like to see us get further in to those industries.” Selfishly Andrew would like to see the company dabble in high performance motorsports applications too, but finding the right company that requires aerospace grade precision to partner with is not a simple task.

Mark and Andrew’s goal is for BMC to grow into a more diversified manufacturing business by offering additional services and expanding on what they already do well. A few of their options include adding a plating line and bringing 3D metal printing services in house. “I’d like to see us with full design engineering capabilities,” tells Mark. “We’ve gained a lot of manufacturing engineering expertise over the last 45 years. We deal directly with the customer’s engineering teams about the manufacturability of the concept. Adding design is just the next rung on the ladder.” Andrew echoes Marks views and concludes, “Expanding what we do and who we do it for is key to our future growth. Bogue Machine Company is more than a job shop, we are now, and will continue to be a solutions provider for industries requiring aerospace precision.”