When you walk into Blackout Defense, you see all the expected technology of an elite defense manufacturer.  But Blackout Defense isn’t making cruise missiles.  They’re making America’s rifle. 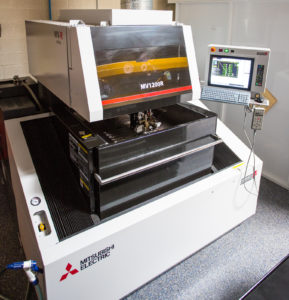 Blackout Defense purchased the Mitsubishi MV1200R wire EDM specifically to machine out the magazine well on their AR-15 style rifles. It took a little getting used to having never operated an EDM before. Through the support of North South Machinery and Mitsubishi Blackout Defense was able to get production rolling at the level of quality they required. Starting next year the EDM will also play a part in the manufacturing of their precision bolt-action rifle and 1911 style pistol.

In other words, they focus on the popular AR-15 rifle.  They machine the lower receiver from a block of aluminum on their DMG MORI NHX-4000 and use their Mitsubishi wire EDM to cut the magazine well.  But why invest so much in automation and technology for a rifle whose design and engineering has changed little since the Cold War?  “My wife asks me that all the time,” cracks Ash Thompson, one of the founding investors in Blackout Defense.  “But all jokes aside,” he says, taking a serious tone, “we believe we could make the AR better.”

Ash Thompson was born into a military family and moved more than a dozen times before finally settling down.  No matter where they were on assignment, though, he spent his summers on his grandparents’ ranch.  “My grandparents tried to teach me how to tend to the cows,” said Ash, “but all I wanted to do was take apart the tractors.”  After earning his degree in engineering, Ash envisioned himself modeling aerospace components for defense purposes.  But after years as a design engineer, he became disillusioned.  “I kept thinking back to my summers on the farm,” he reminisced.  “I missed getting my hands dirty.”

One day, Ash decided to walk his latest blueprint to his employer’s machine shop instead of e-mailing it to the machinists.  “That was eye-opening,” recalls Ash.  “Lots of jokes start with ‘an engineer walks into a machine shop,’ and that certainly was true in my case.”  “I was totally out of my element,” Ash admits, “but I wanted—no, I needed—to learn more.”  Ash buried himself in CAM software tutorials and spent Friday nights watching YouTube videos on the art of machining.  “I was single for a long time,” Ash deadpans.  Fast-forward years later, and Ash had the opportunity to invest in a machine shop of his own.  “It was fate.”

Ash’s partners weren’t sold at first on manufacturing rifles.  “In the elite manufacturing world, rifles aren’t sexy,” Ash explains.  “But I just kept thinking back to the farm.  I wanted to make a utility—something practical and ordinary, but I wanted to make it extraordinary.”  After some persuasion, Ash convinced his partners that innovative design improvements could translate into real accuracy and stability enhancements for the AR.  “Our target market is serious shooters and law enforcement,” he says with a smile, hovering over the pun.

Blackout Defense elected to start with the best of the best.  “For some reason,” Ash puzzled, “new shops are afraid of horizontals and tend to start with commodity-level vertical mills.”  “But not us,” Ash proclaimed.  “The first mill we bought was a DMG MORI NHX-4000.”  But they didn’t stop there.  “We dove right in and ordered at the same time a Mitsubishi MV1200R from North South Machinery.”  Reflecting on the pairing, Ash noted “it was the logical choice.”  “DMG MORI and Mitsubishi are highly respected and North South Machinery also is a trusted name in the business.  We knew these would be worthwhile investments.”

And, indeed, they were.  The learning curve on the EDM turned out to be steeper than expected, causing Blackout Defense to turn the experts for help.  Brian Juarez from North South

The magazine well on an AR-15 style weapon is often broached to save money. Blackout Defense utilizes their Mitsubishi wire EDM to machine it instead. This added level of precision is a must for dedicated civilian shooters and law enforcement agencies alike. 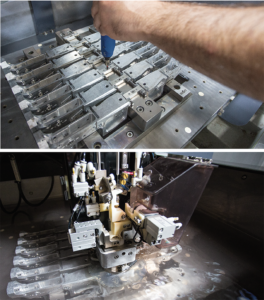 EDM fixtures don’t have to hold the part as solidly as you would need to on a mill, but they offer their own set of nuances that you don’t see on any other style of machine. Blackout Defense cuts 12 lowers at the same time. They machine two racks of lowers per day.

Machinery and the team at Mitsubishi were instrumental in getting them back on track.  “We had some operator error in the beginning,” Ash confessed, “and we had to crush more subpar lowers than I care to admit.”  Ash heaped praise on Mitsubishi’s customer service.  “They got us back up and running like we should have been from the beginning.”  Ash has no regrets with his recommended purchases.  “They were worth every penny.”

Blackout Defense has found the EDM to be particularly worthwhile because of its accuracy.  “The only alternative to the EDM for the magazine well is broaching,” Ash explained.  Although broaching is far less expensive, it generally is associated with lower-end rifles.  Ash knew that their target market would demand more.  “Law enforcement agencies need a fast reload, and broached mag wells are more likely to drag on the mag release.  Quality is everything, particularly when it comes to a weapon that could mean the difference between life and death.”  Ash and his partners concluded that EDM was the only way to get the job done right.

One look at Blackout Defense’s lowers and you can see they were dead on.  They can achieve with their EDM a near 90-degree corner if necessary.  “EDM is the only way to get it tight and precise,” remarks Ash. “It is impossible to do this with a mill or by broaching.”  Blackout Defense EDMs 12 lowers at a time, efficiently completing two racks a day.  Ash touts the Mitsubishi MV1200R as one of the best and most enjoyable machines he has ever used.

Ash is proud of the ripples Blackout Defense has made in the AR market.  Continuing its trend of innovative and measurable enhancements, Blackout Defense has its sights set on introducing a precision bolt action rifle by the end of the 2019, and a 1911 pistol by the end of 2020.  Ash predicts that the EDM will play a significant role in the manufacturing of both products.  “We anticipate using the EDM to refine the bolt action receiver after heat treatment.  We also expect to use the EDM to cut the 1911 slide and frame from a single block of material.”

Blackout Defense has everything in house:  milling, EDM, heat treating, and even CNC grinding.  “We crammed a lot of technology in a very small space,” notes Ash.  “We believe in technology and want to be able to control as many processes as possible to minimize the manufacturing variable.”  As evidence of its success, Blackout Defense just ordered a DMG MORI NLX-2500 mill turn center with live tooling and dual spindles to manufacture bolts for its anticipated bolt action rifles.  “By keeping everything under one roof, we are able to ensure the highest quality without delays.” 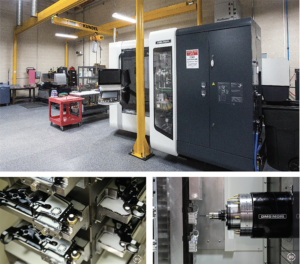 Blackout Defense has a DMG Mori NHX-4000 horizontal milling center. They run lights out and machine 24 lowers in 9 hours.
Ash hopes to add a pallet pool to increase the automation level in the shop. His goal is to have it run for days with minimal operator interaction.

Even more impressive, a new Zeiss Contura CMM arrives next month as Blackout Defense works towards their ISO9000 quality-control management. Even though ISO isn’t required, Ash believes in the value added—he is confident that Blackout Defense’s customers will appreciate knowing that their products are 100% quality-controlled.  Professional shooters and law enforcement agencies expect top notch manufacturing practices and ISO is a large part of that.