The worldwide chip shortage has garnered a lot of attention over the past few years. The COVID-19 pandemic and now Russian’s invasion of Ukraine is hurting supply chains even more than before. At home, it has become a crisis of national security with the U.S. relying too heavily on foreign powers to manufacture the lifeblood of the tech industry. According to the Congressional Research Service (CRS), the United States’ share of global semiconductor fabrication capacity has diminished from roughly 40% in 1990 to around 12% in 2020. East Asia is home to nearly 80% of the world’s chip fabrication. America’s largest tech companies including Google, Apple, and Amazon, rely on Taiwan for a staggering amount of their chip production. 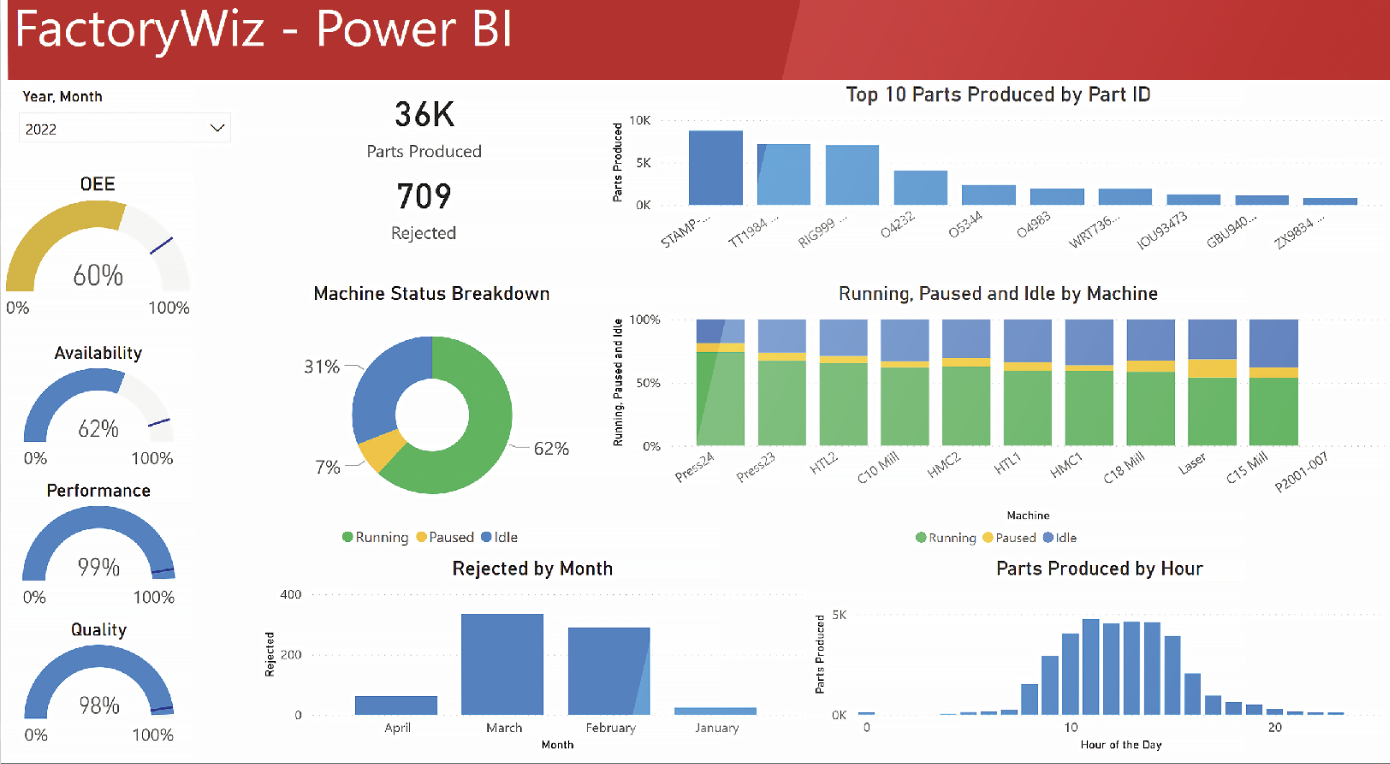 Through the large TV dashboards you can see how individual machines are performing in real time. You can see by the charts that there are a variety of metrics available to view. The dashboard is fully customizable. In the case of Benchmark’s Precision Technology group each facility focuses on their own matrix before having a weekly meeting with upper management to compare and contrast the group as a whole. Seeing how the sister sites compare is a great motivator, but more importantly it is a way to ask how they can improve processes.

According to Whitehouse.gov “The President is urging Congress to pass legislation to strengthen U.S. research and development and manufacturing for critical supply chains, including semiconductors. The Senate passed the U.S. Innovation and Competition Act (USICA) in June and the Administration is working with the House and Senate to finalize this legislation. It includes full funding for the CHIPS for America Act, which will provide $52 billion to catalyze more private-sector investments and continued American technological leadership.” Companies like Benchmark are finding ways to increase their capacity in order to keep up with the rising demand of machines needed to build the chips.

Founded in 1979, the Tempe, Arizona-based company is a leading global partner for outsource design engineering and manufacturing of complex products. With 24 facilities in eight countries, they employ nearly 11,000 people. Benchmark’s Precision Technologies (PT) business unit is one of the  business units experiencing rapid growth. They make up a significant part of the company, with sites in Tempe, Arizona, Concord and, Fremont, California and Penang, Malaysia. One of its primary markets is semiconductor capital equipment. This includes, but not limited to front end wafer fabrication equipment, backend wafer fabrication equipment, and test and measurement equipment.

“As part of the PT group, we support various markets across our sites,” tells Patrick Kealey, senior director, Global OpEx, Precision Technologies at Benchmark. “We don’t have our own product lines and are 100% contract manufacturing and “build to print”. Recently, we’ve been riding the semiconductor wave and are entering a new era of tremendous growth. The “CHIPS” bill is pushing out a $52 billion investment into the industry, with new sites being built by Intel, TSMC and others. At Precision Technologies we provide the key metal machined components and complex assemblies that support the wafer fabrication capital equipment for our customers. There is a significant amount of investment coming into this market, and we are preparing for that in a variety of ways.”

Each machine has an operator terminal as well as shop wide large TV dashboard displays. Everyone being able to see production status is a great way to quickly assess the overall operations. It is also a great way to create a friendly rivalry between operators that can lead to an increase in production numbers.

PT has deployed FactoryWiz machine monitoring systems on its advanced CNC machining centers throughout the facilities. There are well over 100 machines tied into monitoring, with the goal being to expand into non-machining type equipment like CMMs, welding equipment, clean rooms, and sheet metal.

“Concord was the first of our sites to get the FactoryWiz monitoring system about five years ago,” explains Kealey. “At that time we were able to see the monitoring in a visual fashion.  The semiconductor market was just coming off a ramp in demand (2017/2018) and there was open capacity in our factories.  As the newer ramp in semiconductor demand took off over the last two years we started to use the FactoryWiz process for collecting data and taking action to proactively manage the “up-time” of the machines.”

“The key to success with this project is to involve and empower the operator by giving them these tools,” continues PT technologies quality system manager, Reza Bayat. “With these tools they become part of the solution instead of simply pointing out there is a problem. These tools help the operation team identify problems and develop solutions to improve OE.”

“It is historically the easiest to point the finger at the operator,” adds Domenic Lanzillotta of FactoryWiz. “It is always on them, even when it’s something out of their control. It’s always best to involve operators early in the adoption process because they are in the trenches, and often the person with the most insight as to where the bottlenecks are.”

For the PT group, it is about identifying process challenges. How can they optimize setup changeover activities? Why is the machine idle and what mitigating actions can be deployed to maintain higher utilization? It could be a lot of factors like poor timing of exchanges, waiting on materials, a restroom break or waiting on first article.

“Now, we can track that data and there are escalations associated with it,” explains Patrick. “If a machine is down for a certain amount of time, a message is sent directly to the supervisor. If it is down longer, it is escalated to a manager and so forth. The information is on the shop floor at machine terminals, on giant TV screens, and sends notifications up the chain of command. FactoryWiz alerts us. It alerts us not in the sense that the operator is doing something wrong, but that help is needed. We are finding better ways to analyze the data and we are finding added capacity because of it.”

Left – FactoryWiz success comes from empowering the operator and making
them part of the productivity solution. Right – Real time status is available 24/7 from anywhere in the world on your web enabled device.

“What I find so exciting about listening to Patrick and Reza is how they use the system,” adds John Lucier of FactoryWiz. “So many people use FactoryWiz for the high production capability, asking ‘can I shave seconds off?’ When you get users like Benchmark’s PT crew, who really know continuous improvement, you see that a high mix / low volume operation can benefit as well.  Instead of the cycle time being the most important data point, processes like how soon I can get the next part running becomes more important. You are looking at different data, but it is still data. More and more shops are beginning to see the value in data collection and not just on reduced cycle times for high quantity production runs.”

“The most successful implementations we see comes from customers when there is an internal champion,” touts Domenic. “That can be anywhere from the top down. A supervisor, a manager, or someone like Reza in the operations team. You need that one spark to make it spread like fire. It’s like a gym membership. If you get it and don’t go, not getting fit isn’t because of the gym. You collect all this data, but someone needs to interpret it and plan a course of action. Benchmark gets it. They are a power user now, but a year ago that gym membership wasn’t being used to the fullest. They have taken this tool and are utilizing it and improving on how they use it every day. They are sharing from operators, to managers, to supervisors. The data is unbiased, and it doesn’t lie. Trust the data and work on actionable items to improve. As they grow and learn, they are pushing us to develop new features and services. It is amazing how far they’ve come in such a short time frame. A year ago, they were a customer, but now they are one of the top few companies in the nation using FactoryWiz to this extent, and we love it.”