As Brian Evanson enthusiastically explains the finer details of a recent job order, it’s clear that the career manufacturer has chosen the right line of work.

As a lifetime resident of Ontario, Calif., and the surrounding area, Evanson — owner of Ontario-based BD Customs — is both in his element and firmly entrenched in the region’s manufacturing scene.

Evanson is a manufacturer with both a knack and a passion for manipulating metal, so it’s unsurprising that he began his career on the shop floor at the age of 15. After spending several years with various companies, he was co-owner of SoCal Machine from 2005 to 2010, and struck out on his own with BD Customs in 2010.

“I took a metal shop class in junior high and I was hooked,” Evanson says of catching the manufacturing bug. “I want to be tearing through metal, making shiny stuff and having fun, and I like to make things very exact. If it’s a plus or minus four or five, I’ll make it a plus or minus one.”

Those exacting methods mean that very little material is scrapped at BD Customs, a bonus for the small-but-mighty job shop powered by Evanson’s ingenuity — in addition to one part-time employee and Evanson’s wife, Crystal.

To manufacture his wide range of parts, Evanson uses the Surfcam Traditional computer-aided-manufacturing (CAM) solution, by Vero Software. He first used Surfcam in 1991 and, though he’s gained experience with different types of CNC programming software since, Surfcam remains his solution of choice.

“I know of shops that have switched from other systems to Surfcam just to get through the aerospace inspection process because of the quality of the surface in Surfcam,” he says. “There are things you can do in Surfcam that you just can’t do with other solutions.”

While Evanson seeks to continually diversify his client base, he serves just about every industry, and roughly 70 percent of his customers are repeat customers of five or more years.

Among products programmed in Surfcam Traditional and manufactured by BD Customs are reproduction vintage car parts, custom kits for Harley Davidson motorcycles, components for amusement-park attractions, replacement parts for printers, CNC toolholders, robotic assemblies, molds for the production of weights for resistance training, aluminum wheels, and much more. Molds account for about 20 percent of Evanson’s workload, and all are designed to produce urethane products.

Evanson credits the ease of use inherent to Surfcam for helping him to juggle his diverse workload and consistently turn out high-quality parts. 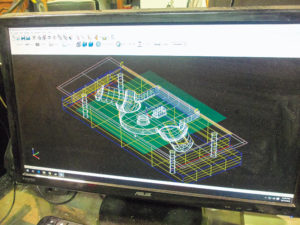 The ability to run simulations and choose from among different part-viewing options within the Surfcam Traditional interface makes it easy to inspect parts and verify programs before they hit the shop floor.

To handle his computer-aided-design (CAD) duties — which range from altering an existing design to designing from scratch or even from a simple paper drawing — Evanson uses the SOLIDWORKS® CAD solution, by Dassault Systèmes. Because a SOLIDWORKS plug-in is available for Surfcam, Evanson is able to easily open a SOLIDWORKS file from within the Surfcam interface.

“It’s really helpful because you get not just a surface part, but a beautiful surface part with all of the wire it took to make it,” Evanson says of the interoperability between the two CAD and CAM systems.

Powerful associativity between the systems means that, when changes are made to SOLIDWORKS design models, Surfcam Traditional automatically identifies the design revisions and offers to regenerate the affected toolpaths within the Surfcam Operations Manager.

“It cuts down your programming time massively,” Evanson says of the plug-in.

Among additional features within Surfcam Traditional that help Evanson to achieve the greatest possible efficiency are the Z-roughing and Z-finishing cycles.

The Z-rough cycle, which — as its moniker implies —  engages the Z-axis, is designed specifically to remove a large amount of material as quickly as possible in preparation for additional operations. Using a 2-axis (X,Y) pocketing cycle in Z-axis increments, the Z-roughing operation is an efficient method for removing material from around a part before the finish cutting. Z-roughing is also used to remove large amounts of material from inside a cavity.

Z-finishing is an efficiency-boosting strategy that works especially well on steep walls. It engages the Z-axis to follow a constant toolpath around the part profile to create an even, high-quality finish.

“They’re basic 3D things, but Z-rough and Z-finish can do 90 percent of my work,” Evanson says. “I use them all the time.”

Evanson also notes that Surfcam offers a “hard zero point” in reference to machine zero when a part is oriented, which he feels makes it easier to manipulate part orientation and delivers greater programming flexibility.

Evanson also takes advantage of Surfcam Traditional’s TRUEMill machining cycle, which is an optimized roughing toolpath that can be completed with a one-step 3D roughing through pre-finishing operation.

TRUEMill delivers a synchronized multiple-tool strategy that coordinates up to eight tools in a single operation. The toolpath creates uniform step height across all surfaces, regardless of how many tools are used. It also removes material at significantly faster rates, and at greater depths of cut.

“The brilliance of the toolpath is really in the hard materials,” Evanson says of the TRUEMill machining cycle. “When I used a standard pocketing program to perform roughing, I was breaking tools. I broke three tools making one pocket. With TRUEMill, I used one tool for three large pockets in hardened stainless steel.”

Surfcam Traditional and its machining strategies deliver more than enough power and flexibility to help Evanson tackle the wide range of projects that land on his desk and, ultimately, his shop floor.