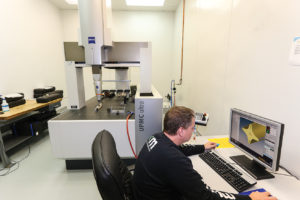 Above – The Zeiss UPMC Ultra is located in a corner of the basement to minimize floor vibration. The custom built, climate controlled room is dedicated to servicing a single customer. Here they measure 18” long pure tungsten mandrels used in mass spectrometers. They produce an average of only six per year.

Founded by brothers Fred and John Auer in 1972, Auer Precision Stamping Inc. has put the precision into the Phoenix, Arizona metro area. The brothers from Pennsylvania were both tool makers by trade before heading to the Southwest seeking opportunity and possibly better weather. They opened shop in a small building in Mesa, AZ., a building they still utilize today for assembly. Auer Precision has come a long way in the past 42 years, buying up all the buildings around them as businesses came and went.

Today they total over 150,000 sq.ft. between 7 buildings with a staff of 120 people. Like a small village, each building on the property houses departments or machinery groups set to a certain task. The flagship building, the only one Fred and John had built to their specifications is home to administration, engineering, and tooling, but offers up something very unique to the Arizona desert; a 2 story tall basement. “Customers don’t like it being called a basement,” jokes quality manager Creed Fleenor. “So we just call it the sublevel. The sublevel has been a vital part of our business for many years.”

Being below ground has its advantages, especially when it comes to cleanliness and climate control. On a windy 120 degree summer day, dust and heat are the enemy of precision, so the sublevel area was set up for clean room manufacturing. Over the years they have produced everything from thin film used on advanced chip sets to diagnostic test strips for diabetes/prothrombin, media handling for genomic assay and high precision components for ultra-sensitive mass spectrometry quadra-pole assemblies. For the last few years the sublevel has also been home to a key element of their medical manufacturing capabilities, a Zeiss UPMC Ultra.

The UPMC replaced a different manufacturer’s machine that Fleenor and his team found to be difficult and expensive to maintain. “The old CMM had a measurement head cantilevered out on an aluminum bar, and it just didn’t produce the level of results we needed. I wanted to upgrade to something more in line with an industry standard.” Having previously purchased a Zeiss Contura Select from Todd Johnson at TQS, Fleenor started his search there. “We love the Contura and it yields us great results, but it wasn’t up to the task we needed it to do.” He narrowed his search down to the UPMC, but with only a handful in North America it wasn’t something he could easily borrow for a few days to do some Gage R & R’s on. One machine was available, but it required a quick jaunt to Germany for Fleenor.

After placing their order for the new Zeiss UMPC Ultra, Auer Precision set to the task of building a workspace for their new CMM. The room itself cost $160,000 and required floor vibration testing due to train tracks in their vicinity and a fear that it could cause false readings. The room is optimality located in the corner of the sublevel to minimize vibrations and sits at cool 68 degrees year round with 50% humidity.

Auer Precision makes key operating components for mass spectrometers. One product is an 18” long 4 sided mandrel made of pure tungsten. The shaped ground surface requires two months to just make one finished product. “The UPMC is dedicated to one customer,” explains Fleenor. “The tolerances are sub-micron, and at a level of precision that most people in the world can’t comprehend.” The UPMC’s 3’ thick granite base is polished on both sides so it expands evenly, and in the initial installation process the base was left to normalize in the room for two weeks before any further work was performed.

When out of spec to you means less than 6 microns, any variation in temperature or a piece of lint can wipe away the spec. “One micron is 0.000039” and we’ve learned that we are able to shim for grinding by using the ink of a sharpie marker. Different colors have different thicknesses, but the best tip we can offer is hire good people.” Auer maintains in-house metrology capability for programming and analysis.

The medical industry represents only a portion of Auer Precision’s capabilities. Current emphasis focuses their efforts towards Medical devices and alternative energy products. Auer Precision is branded in the semiconductor industry where process carriers are often referred to as “Auer Boats”.

With multi-axis, live tooling milling and turning, ballistic stamping technology, EDM’s, waterjets, CNC grinding and assembly, there is almost no industry they don’t manufacture for. They have the ability and tooling to produce a single prototype up to a million pieces if necessary. Their stamping department alone can turn out 300-1000 pieces a minute when needed. Auer Precision is ISO9001:2008 certified and recently earned their ISO13485:2003 certification. “ISO13485 represents our broader strategy of engineering and manufacturing support for new medical and measurement technologies,” stated Auer’s president, Brent Bollong. “Our customers not only expect, but receive all the necessary capabilities to bring fully validated products to market.”

For more than 40 years, Auer has provided premier quality, engineering and contract manufacturing services to customers in the medical, semiconductor, alternative energy and other critical markets. “Customers are always surprised by all the capabilities we offer,” finishes Fleenor. “You ask what we do, I ask what do you need us to do……because we probably already do it, and have been for years.”