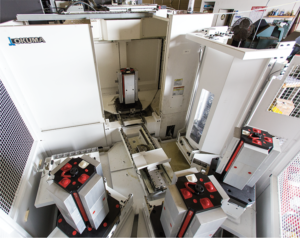 Liberty Industries newest machining center is an Okuma MB-4000H. It has six Chick Workholding pallets and 182 tools. They just added the pallet changing system and are gearing up towards lights out manufacturing. The goal is to touch it only twice a day to load and unload parts. The speed and accuracy of the machine have greatly reduced cycle times.

Bill Carter went to school to become a woodworker, but a friend told him about an apprenticeship at Aerojet General to become a machinist. At 18 years old that sounded good, so he applied. There were over 500 applicants and they only took five people. He was one of those five. “I served my apprenticeship for year and made some friends,” tells Bill. “Turns out we were pretty good at machining. We worked on the Mark 46 torpedo program, Apollo missile and other aerospace and defense projects of similar nature. I went into business with my ex partner and his father, incorporating Liberty Industries in 1966.”

He and his partners went to the bank and put up $500 to buy their first machine tool, an engine lathe that they strapped a turret to. They split their time between their actual jobs and getting Liberty up and running. The business grew almost immediately, focusing their efforts on aerospace, but taking any job that came in the door. Bill’s family has replaced his partners, and Liberty stands taller than ever with advanced machining centers to support their customers.

For the past nine years there have been two Bills at Liberty Industries, Bill Carter the owner, and Bill Brock the son in law, and general manager. Both answer to Bill, so you need to be more specific. Big Bill, Original Bill, maybe even First Op Bill, will work, but you learn quickly that Old Bill is not going to fly with Bill Carter. With five decades of experience, Big Bill handles all the estimating and is always there to lend a veteran opinion when needed. New Bill tackles the duties of general manager and works his magic in the sales department. Jodie, Big Bill’s daughter, and Little Bill’s wife is the office manager and been with the company since 1997. “My dad hired me to answer the phones when my mall job wasn’t giving me any hours,” laughs Jodie. “I was so nervous when the phone rang. I would get up and run to the bathroom. Dad would page me over the intercom to get back to the office. I didn’t know what to do if they asked a question I was unsure of.” Big Bill laughs at how funny that is now with Jodie running the office. “She is fearless now. This place would stop without her,” he touts. “I’ve done everything to keep her here. Working with your family everyday is such a reward.”

Liberty Industries has a pair of Okuma Genos M560v vertical milling centers. They purchased the first one about four years ago and liked it so much they added a second one a few months later. This part is being held by the Chick One-Loc System on top of the Foundation grid platform . They are utilizing the capabilities of the Okuma to knurl it. They were not able to do this before getting the Okuma but both Bills tout the rigidity of the Okuma as the reason they can do it easily now.

Liberty Industries in El Monte, Ca. focuses most of their efforts on the aerospace industry. Manufacturing tight tolerance, complex parts are where they really shine. From planes to tanks, they expertly service the biggest names in the industry like Boeing, Airbus and Lockheed Martin. With 4 and 5 axis milling and a dozen turning centers they are well equipped for the challenge. “When I first started this business, I wanted nothing but American machines,” tells Big Bill. “Liberty Industries was all Hardinge, I just wanted to buy American, and run American parts. Back then Hardinge offered a 1” CNC for say $40,000. I kept losing job after job and I couldn’t figure out why at first. Mori Seiki was selling a 1.25” machine for 25% less. It was either join them or go broke. We started to buy Japanese machines to stay in business, but now we love what they do and keep adding more. We still buy Haas machines too. They offer a lot of value for the money. It is because of their price point that we were able to make the step up to 5 axis machining without going broke.” Coincidentally the added business from the 5 axis is what allowed Liberty to be able to purchase their first Okuma vertical mill from Gosiger the local Okuma distributor.

Big Bill has always been one to offer something different than what the other shops might have. It started way back in the 80’s when he bought a Mori Seiki ZL25 lathe. “It has 6’ between centers. I could turn a full size person in that thing if I wanted to,” touts Big Bill. “It has a 2- 5/8th hole through the spindle so we can bar feed the whole thing. Not everyone had that. I’d buy machines with as many tools as it could hold and a big table so I could setup up multiple jobs. The same thing when it comes to 5 axis machining and having a 6 pallet Okuma horizontal. Not everyone has advanced machining centers, so we have an advantage when it comes to bidding on the job and producing it.”

Liberty purchased their first Okuma Genos M560v vertical milling center four years ago. Right away they saw the benefits of more speed and accuracy. So much so that three months later they added a second identical machine. Last year they added an Okuma MB4000H horizontal system and upgraded it this year by adding a six- pallet changer. “We got all three of our Okumas from Gosiger and our favorite salesman Tom Tran,” tells Bill Brock. “Seriously, we’ve been buying machines of varying brands for many years and he is a great guy. Not just a great sales guy, but also a great guy. He worked with us from the get go and is very responsive to our needs. Gosiger and Okuma are phenomenal. We have a job that used to require outside grinding on the diameter, but with our Okuma machines it is now machined in house within the same spec. The MB4000H horizontal came stock with two pallets, but we liked the versatility of the pallets so much that we recently changed it to a six- pallet system. The pallet system is very compact and fits perfectly in the space we had. We have 182 tools available to support the number of pallets and jobs. We have all Chick Workholding pallets giving us the ability to have as many jobs setup on it as we have pallet sides. We are still learning how to maximize production and are slowly moving jobs over to that machine. The goal is to be running lights out here in a few months. We want to touch it twice a day to unload and load and let it do its thing the rest of the shift. You can even add a 5th axis pallet to the horizontal for even more capabilities, and that is something we are looking into as well.” 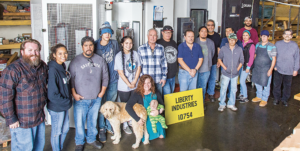 Liberty Industries is a family owned and run business. Of their 18 employees only four of them don’t have another family member as part of the team.

“When I bought the first Okuma it wasn’t for me,” explains Big Bill. “It was for my daughter Jodie, Bill, their kids and everyone who works for me. I didn’t need it, but the future owners of Liberty Industries did.” Liberty Industries employs 18 people and only four of them don’t have someone related to them also working here. Father and sons, father and daughters, nephews, uncles, sisters, brothers, wives and husbands, it is all family. Danny started by sweeping floors three decades ago and is the lathe setup guy now. “The employees are what make us great,” adds Jodie. “We don’t have what we have because of us. It is all because of them that the business is able to succeed.” “You can’t beat working here with family,” concludes Bill Brock. “Jodie grew up here and our kids are growing up here. We have employees who have been here 30 years and their kids work here. It is a great place to work. We take a lot of pride in our parts, in the company and in our families, because here at Liberty Industries it is all the same thing.”