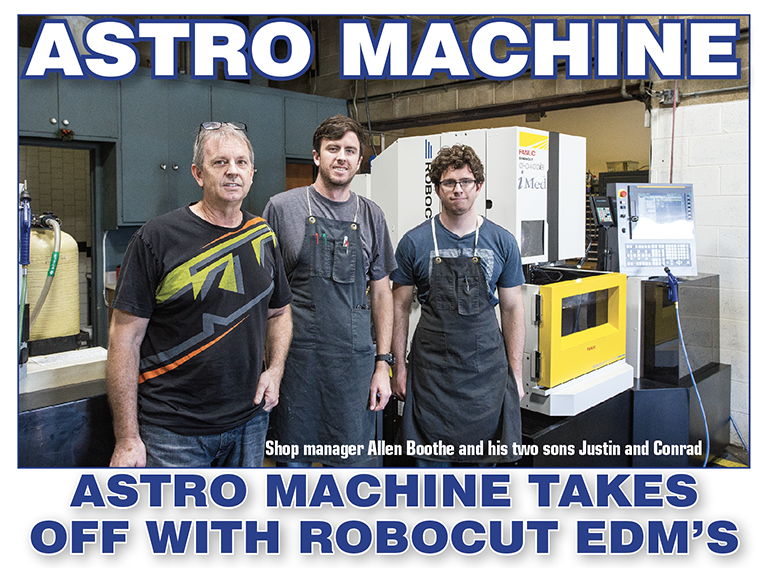 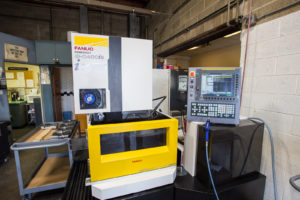 Astro Machine Co has two Fanuc A-C400iB iMed Robocut wire EDM machines. The first one they got 4 years ago from Methods Machine Tools and liked it so much they recently added a second one. Astro’s EDM machines have a work envelope of 400mm x 300mm x 255mm so they can get a variety of parts on the table at the same time.

Two machinists from Hughes Aircraft founded Astro Machine Co in 1965 at the height of the space race. Everything Astro related was cool, from Astro the cartoon dog to Astronauts. Apollo 11 was still a few years off, but the space industry was booming in So-Cal, so Jim Vellonakis and Bill Skintauy set up shop in Hawthorne, Ca. Fifty years later Astro Machine is still in Hawthorne and is in the second generation of ownership. Jim’s son Stas Vellonakis grew up in the shop and took over running Astro in 1985. Astro’s core focus has remained the same over the years, but recently the precision machine shop has added the value of wire EDM into the mix.

As their name implies Astro Machine Co does quite a bit of work for the space industry. They specialize in the satellite, defense and medical industries. “We are 100% a job shop,” tells Astro’s plant manager Allen Boothe. “We quote the order and if we win the bid find a way to make money manufacturing it. Astro has never had a product of our own, we are a contract machining company and always have been.” Allen began working at Astro while he was still in school and 30 years later he is head of manufacturing. His decades of experience make him a key player when it comes time to buy new equipment. Up until 4 years ago Astro Machine Co was a milling focused production facility. They got their first Fadal tool changing CNC mill in the late 80’s and have stuck with the Fadal brand through the years. “We have 11 spindles of milling,” details Allen. “All our mills are Fadal 3 axis machines some with 4th and 5th axes trunnion tables. Sizes vary from machine to machine but our largest is 80” x 30” and can hold 30 tools. Having all the same brand machining centers makes things a lot easier. We keep machines for a long time so when we began our search for a wire EDM longevity and a respected brand were right at the top of our wish list.” 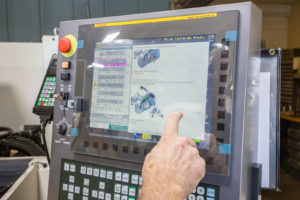 Fanuc puts their top of the line control on their own machines and the 31i was a big selling point. The 31i has a large touch screen display and friendly user interface.

Astro Machine Co purchased their first Fanuc Robocut A-C400ib iMed wire EDM back in 2014 from Methods Machine Tool and recently added a second machine to their production line. “We did our due diligence,” describes Allen. “I was familiar with the Fanuc Robocut because an outside EDM vendor we used had one. By familiar I mean I knew the brand and some of the capabilities, but by no means did we know much about EDM machining. Number one for us is having coverage and the Fanuc EDM machines offer us a wide set of capabilities to support the mills. The wire EDM lends itself to very small radii and high aspect ratios. Rather than continuing to send EDM work out we decided to buy one. We used it so much that we relocated our lunch table to find space for a second machine.”

With no EDM experience Allen went to Method’s week long training program and figured it out from there. The training Methods offered was a valuable tool and gave him a solid base to start machining from. “The Fanuc 31i control was a big part of our decision to purchase the Robocut,” details Allen. “The training gave me hands on experience with the systems and menus that otherwise I would have had to figure out on my own. The machines are not difficult to learn compared to 5 axis milling so we picked up on it rather quickly. My two sons Justin and Conrad also work here and they went through the training when we added the second machine.” Fanuc controls are very popular among machine tools, but Fanuc only puts their top of the line control like the 31i on their own machines. It is rare to see as sophisticated a control on commodity level machines. That added value didn’t go unnoticed by Allen and the management team at Astro. “The 31i control has a friendly interface, a large touch screen and all the manuals are available on screen,” details Allen. “It is a Windows back end and can support a mouse, keyboard and connect to our network. It has external features like remote monitoring so I can check in on it from home and see how it is running or if there was a fault.” 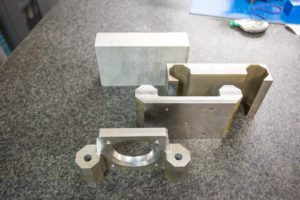 A typical use for the Fanuc Robocut wire EDM machines is to start with a block of titanium and machine the outer dimensions before sending it over to the milling department. Astro fixtures enough parts on the table to run an entire extra shift unattended, doubling the production for the day. The lights out capabilities of the EDM make it a very productive machine tool. An added bonus is being able to dispose of the waste piece instead of dealing with millions of chips.

The Fanuc EDMs were originally purchased to support the Fadals by machining small features and slots not possible to do with a mill. The more they used the EDM the more ways they found to utilize the capabilities. “You remove metal differently with an EDM,” explains Allen. “Instead of using a ½” endmill to sneak up on a desired shape you can just cut a final path with the EDM. It seems silly, but waste is easier to handle when it comes off as a large chunk vs. thousands of chips.” Astro’s EDM machines have a work envelope of 400mm x 300mm x 255mm so they can get a variety of parts on the table at the same time. Prior to the EDMs, lights out manufacturing wasn’t much of a possibility due to the nature of the parts and material used. That changed when the first EDM came on line. “EDMs are as a whole very reliable, and the Fanuc is no exception,” explains Allen. “They don’t require a lot of attention during the day and can easily run unattended. We set up the machines to run for 8-10 hours at a time. My guys come in and load it up and it runs. At the end of the shift they load them again. We get 16-20 hours of run time every day out of each Fanuc Robocut with very little fuss. The machines are just so constant in what they do. On a milling machine running the exotic alloys you need to babysit it. You have to listen to the tools and be there to attend it. We only are staffed with one shift, but we get two shifts minimum out of our EDMs, every day. I’ve never needed a service call on either machine and I love that. I do all the basic maintenance and replace things like rollers. The nice thing is the manual is on the control so I pull up the part I need to replace and I get step-by-step instructions on screen with actual photos showing how to do it.”

Astro Machine Co has 13 full time employees with 9 dedicated machinists. They run only a single shift 5 days a week but the shift is split between an early start time and a later start. Allen touts the skill of his machinists as the reason Astro has been successful for so many years. “Our machinists are just that, machinists,” details Allen. “We don’t have operators or button pushers. Our people program, they setup, they run, they inspect. They are all high skill level. We do low production numbers so having just an operator doesn’t work for what we do. A long run for us is in the hundreds, but most of the time it is 1 to 10 parts total.”

The old adage of the sky being the limit doesn’t really apply at Astro Machine Co. For Astro, the sky is just the beginning, and for over 50 years shooting for the stars is just called a typical Tuesday.