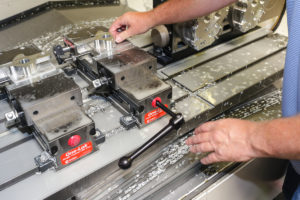 Arrow Machine Industries has a variety of workholding solutions from Chick. The OneLOK system works well in small batch manufacturing. On short runs the process is controlled less by how fast the machine is, and more by how fast the machinist is. You can change jaws with a single turn of a t-wrench and repeatability of 2 tenths (.0002). The fully sealed bed keeps chips out.

Arrow Machine Industries Inc. is a family owned manufacturing center in El Cajon, Ca. They made a name for themselves in underwater camera and Sonar housings. Today, they have a more surf and turf approach to manufacturing, splitting time between Harley Davidson parts and underwater items.

Scott Dacy is president of Arrow Machine Industries Inc. (AMI), holding that position since he started the company 20 years ago. Scott wasn’t born into machining, but rather came into the industry because he needed a job after leaving the service. “I wasn’t college bound and instead enlisted my senior year in high school,” explains Scott. “Everyone laughed when I told them. They laughed even harder when I explained this scrawny kid had joined the Marines. I wasn’t grown up as a person when I joined, and even after four active and two years in the reserves I still wasn’t what most would consider a complete person. When I got out of the military my girlfriend’s dad gave me a job at his machine shop sweeping floors at four bucks an hour. It was about the same as I made as a helicopter mechanic in the Marines.” Scott was a hard worker and had an aptitude for math, but his personal life was still a mess. He found himself living in his 1978 Thunderbird on National Avenue when the realization hit. “One morning I saw a guy about my age pushing a shopping cart,” describes Scott. “He didn’t have a car or a job, he was just homeless. I knew things had to change and I went and applied for a job down the street at a company called Fourward Machine.”

Scott went to work at Fourward Machine as a CNC programmer. “I told them I was a CNC programmer and that’s what they hired me as,” explains Scott. “Of course, my CNC programming experience came from sweeping floors, loading parts, unloading parts and loading the program into Shizouka knee mills with Bandit controls. I figured I had learned enough from watching the bosses and programmers do their job.” He was in way over his head, but came in early and stayed late off the clock to get things done. The bosses liked his effort and he had a key to the shop. He spent an entire weekend working for free because he couldn’t figure out how to get the machine to drill holes. He could get it in position, but manually had to raise and lower the table to do the drilling. “It was a simple task that even a basic CNC programmer would know,” laughs Scott. “I worked for them 14 years and most of that time I figured I had got away with the fib. Turns out they knew all the time, but appreciated my hard effort.” The end result was that Scott became a pretty good programmer.

After a brief stint at office work in Hawaii, Scott retuned to the mainland for what ended up being just what he needed for his life to fall into place. He went back to work at Fourward and reconnected with Christine, a girl he met a few years earlier. “Even now I am still amazed she wanted anything to do with me,” explains Scott. “She isn’t in the office today, but I have her to thank for everything.” Soon after a long-time family friend, ‘grandpa Harold,’ set Scott up his own workspace in the back of his airplane hanger where he could do his own projects on the weekends. Scott was working full time at Fourward, part time in the hanger and part time for another local company called Gates Underwater. “Grandpa Harold saw something in me that I hadn’t seen yet,” explains Scott. “He’d noticed a change and got me working for myself. In the span of a year I had got married, had a child, bought a house and started a business. Our first machines were a used Haas VF1 and a used Clausing Storm lathe. I even still have them running in the shop.”

The digital camera market was set to explode and no one was making an underwater housing to meet that demand. Gates Underwater focused on Camcorder housings so when Scott went to them with the idea of manufacturing one for the stills camera market they had no issues with him building his own. AMI’s first housing was machined from aluminum for the AGFA 1680 camera. It was a success and he became more and more busying doing his own jobs rather than working at Fourward. “I was taking off any time we were slow at Fourward to build housings,” tells Scott. “It got to the point that they said I should come back when I can find time for them, well I never went back and here we sit.” A company called Watershot contacted Scott and they earned a contract to do the underwater movie camera housings for the first Pirates of the Caribbean movie. “We did housings lens control devices, you name it,” continues Scott. “We became known for our underwater prowess. That led to other jobs for Kodak, theme parks, and even a sonar company.”

All AMI’s machining equipment was older and as a result slow. They didn’t have crazy production runs so it wasn’t an issue until their next big customer came along and needed them to manufacture cam plates, oil pumps and other items for Harley Davidson engines. “We have a standing order to produce as many parts as we can,” details Scott. “It was a different kind of manufacturing than we were used to, but made it work for us. In the back of my mind I always thought speed was a sales tool used by the manufactures and that gains in production would be minimal. Boy was I wrong.” AMI always bought used and always paid cash because Grandpa Harold thought “new” was a waste of money. “We got our first new machine after Grandpa Harold had passed away,” tells Scott. “I liked the thought of having something faster. We bought an Okuma Genos M560 from Gosiger who is the California Okuma distributor and it was a big wake up call. The large expense was quickly overshadowed by doubling the production of the old machine.” AMI discovered a love of the Okuma brand via an older lathe, but the Genos M560 was their first foray into the Okuma brand mills. “We liked it so much we bought a second and then a third machine over a couple year period. We traded in our old lathe for a new Okuma Captain L470M and even purchased a MB-4000 horizontal. I’m a big fan of Okuma and Gosiger to say the least.”

The Hardinge Bridgeport has only been in service for a couple months. The new machine with Chick Foundation and QwikLOKs have netted huge production gains.

For most, a single revelation in production throughout their career is all that can be hoped for. Scott on the other hand is very lucky and has experienced it twice, once with new machines and then again with workholdings. “I originally contacted Chick Workholding Solutions because I was tired of messing with steel vices from the stone age,” describes Scott. “I began to look at the concept of it being a workholding solution and not just a way to clamp a part. What really impressed me with Chick was how some of their suggestions didn’t make them any money.” Chick helped Scott deduce that instead of running the cam plate out of plate material and struggling to hold it accurately that they run it out of extruded bar on the lathe. They run it, flip it, run it flip it and hold .001 on thickness and +/- .00025 on parallelism. It then goes to the mill for critical boring. “The mill used to have a 4-sided steel vise setup,” explains Scott. “Now we have a 12-station Chick MultiLOK system for flexibility. The MultiLOK can easily change from dual station clamping, to single station, or Faceplates for quick change fixtures. The machine runs all day long. We reload it before we go home for lights out operation. The old setup was netting us only 8-12 parts per day, but now we get 36 consistently. There was no huge capital investment like buying a new machine, just a little retooling and rethinking the way we looked at the part. Needless to say, Chick really came through for us.” That set-in motion a plan to rethink of all their machines and how they were holding parts.

With 13 CNC machining centers in 5800 sq.ft. Scott had the arduous task of assessing which machines could benefit the most by a workholding upgrade and started there. “We couldn’t do every machine at once,” tells Scott. “We have made huge strides over the past few years and still have a couple systems left to complete.” To date Scott has added: 2-1040 Chick MultiLOK systems, 2 Chick OneLOK systems, 2-1550 MultiLOK systems, 8 QwikLOK systems and multiple Chick sub-plate Foundations. “If I need something quickly chances are Brian Harrigan at Chick has it in stock and gets it to me within a day or two. The support from Brian and Chick Workholding has been just as good after the sale as it was before I purchased their products. We learned tooling tricks that were a revelation for us. Maybe they were not to the rest of the world, but for us they were and that’s what matters. The ease of use, and the repeatability are only two aspects why we love their products. It is amazing how we went so long without them. I will never go back to old school steel vices again.” 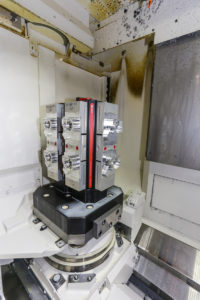 Compared to a tombstone the Chick MultiLOK system gives Scott flexibility. He can easily change from dual station clamping, to single station, or Faceplates for quick change fixtures.

2018 is right around the corner and already AMI is looking forward to continued growth. Their Harley parts customer has been so impressed with the added production capabilities that AMI was just awarded a new family of parts to manufacture. It is a chain tensioner system that attaches to the cam plates. Manufacturing times were slow on their old vertical machine so without hesitation Scott made another call to Gosiger and to Chick Workholding Solutions. “I bought a Hardinge Bridgeport V480 twin vertical pallet machining center,” explains Scott. “It is a really powerful machine in a compact size. It has only been on our floor for a couple months. The first thing we did when it got here was get Chick out to setup a work holding solution.” They added a Chick Foundation sub-plate and six QwikLOKs allowing Scott the versatility needed to run a variety of setups. “We went from one part at a time to three,” tells Scott. “Time per part dropped from 8 minutes down to only 3.”

“Over the years we did great work with what we had,” concludes Scott. “Now we do even better work and a lot more of it. I’m a little embarrassed that it took so long to get to this point, but I’m glad we did. I look forward to the future and what Arrow Machine Industries Inc. adds to American manufacturing. We’ve come a long way since that airport hanger. I’m proud of my employees and proud of what we produce. I’m eternally grateful to Grandpa Harold for his support and encouragement over the years. Christine, my wonderful wife of 22 years saw something in me that I didn’t yet see and we came on this journey together.”