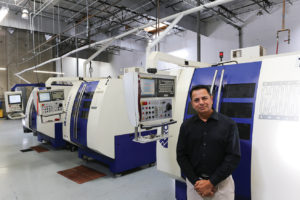 Quality comes in all shapes and sizes, but most manufacturers think about it in terms of meeting the spec. Companies spend huge amounts of money on machines that do the job in the most efficient way. The right tool for the right job is an industry wide mantra, but what about the right tool being the right tool? Without quality tooling the spec could be out of reach. No one wants to get snake bit by inferior tooling and that’s why Cobra Carbide offers American made quality with the perfect amount of bite.

Rakesh Aghi CEO of Cobra Carbide grew up outside New Delhi, India and came to America as a student. He earned his bachelors and later received his MBA at the University of La Verne. “Emphasis since childhood is on your studies,” explains Rakesh. “If you want to achieve anything in life, the first step is doing well in school. There are a lot people in India and it is very competitive. You have to work hard to be better than the next guy and that purpose is ingrained in our DNA.” While at University, Rakesh interned at a company that imported tooling from around the globe. After graduation his choices were to go back to India and run the family Diesel Engine manufacturing business or stay in the land of opportunity and build his American dream. “Manufacturing and distributing diesel engines in India was a good business,” details Rakesh. “At the time my family had 250 employees, but with that came a lot of unwanted stress. I’m an entrepreneur at heart and wanted to build something all my own.”

Rakesh began selling the tools he learned about from his internship. There was a shortage of tooling at the time and all the tooling catalogs were looking for representation. “I started buying tools from Germany, Korea, Spain and India,” tells Rakesh. “For the next five years I sold tooling and could barely keep up with the demand.” In the mid 90’s he started selling carbide tooling. The demand was so high that in 1997 he opened up a warehouse in Singapore just to service his Southeast Asia customers. “The tooling industry started with carbon steel, then high speed and cobalt,” explains Rakesh. “Carbide was the new emergence there, and gaining popularity. Even in Southeast Asia made in America is the universal brand for quality, and they wanted what I was selling.” Rakesh was purchasing more than 25,000 tools a month from a Chicago based manufacturer, 95% of their capacity. “In 1998 the owners approached me to buy them out,” tells Rakesh. “I was buying almost everything they could make, so after some negotiations I bought the company and relocated all the manufacturing to Riverside, Ca.”

With Rakesh now being a manufacturer and not just a distributor he needed a name. Marketing companies came up with everything under the sun, but it wasn’t until he heard Cobra Carbide that it just clicked. “We needed a brand and Cobra Carbide just rolled off the tongue,” touts Rakesh. “Cobra Carbide had a good alliteration sound to it and the Cobra paid tribute to my Indian roots. It just worked and we’ve been Cobra Carbide ever since. Around the world it is a recognized name in tooling.” Business was on the rise and growing for Cobra Carbide until 9-11. “Everything came to an abrupt stop,” describes Rakesh. “The world changed that day and so did this company. In September of 2001 I had eighty-five people working for me, and by July 2002 that was down to only six.” Tooling companies began to dump prices to stay afloat, and Cobra Carbide was no different. They had inventory to service their dwindling customer base, but the machines sat idle. “We retained market share in Asia but that was about it,” continues Rakesh. “We needed to bring the cost of manufacturing down and desperately needed a new avenue to survive.”

Rakesh flew to the retirement city of Bangalore in southern India. There are more than 50 engineering colleges in the area and a growing tech sector. “Bangalore was the perfect city to manufacture from,” tells Rakesh. “I bought land, erected a building and shipped the machines from Riverside to India. With lower operating costs we began importing tools back into the US and exporting them to other neighboring countries.” India has 200 languages, and 300 dialects, but each region has something in common. They all speak English. “India was ruled by the British for Two Hundred years so everyone speaks the queens English,” tells Rakesh. “Before the English, India was a lot of states, Britain united them as a country, built infrastructure, and gave us a common language. English is the international language of business so it makes it easier for westerners to do business with India. That being said India is not that easy of a place to conduct business.” Managing the manufacturing from a far was getting tiresome and in 2006 Rakesh packed up his family and moved to India.

From 2006 to 2010 Rakesh maintained distribution in Riverside and ran the company from Bangalore. “My wife and kids are from there,” explains Rakesh. “I’d lived my entire adult life in America. It was hard for all of us, but a real life changing experience for my family.” Relocation from a gated community in Orange County to an apartment in Bangalore would be an eye opening experience for anyone, but Rakesh hopes his kids see the value later on in life. “They were not happy about the move,” explains Rakesh. “That experience opened them up to the world, one they never would have seen from living in Orange County. I am not happy that the economy forced my hand, but we turned a negative into a positive and rebuilt the company from 9000 miles away from home.”

Outsourcing was never the plan, but only a temporary solution needed at the time. By 2010 business was growing again and Cobra Carbide was back running full speed in Riverside. The Bangalore facility remained open and continued to supply their fair share of tooling, but cost were going up in India. “As India’s economy started to open up and the Bangalore area boomed, we experienced high turnover of employees,” details Rakesh. “Salary auctions with other companies were happening at a high rate. One month your supervisor would need to double his wages and two months later he had another offer doubling it again.” Quality was going down because of employee turnover, freight was going up, logistics were difficult, and it became harder to manage operations from America. Once again Rakesh bought another tooling manufacturer from Boston, MA., and moved it to the Cobra Carbide facility in Riverside, Ca. “My interest in having two manufacturing operations was waning,” describes Rakesh. “U.S. business is up and it has become a nightmare dealing with having a business in India. So I sold my operation in Bangalore to another tooling company and invested 2 million dollars in new machines for the Riverside, CA facility.” Once the sale is finalized in the next few months all Cobra Carbide tooling will be 100% made in the USA again.

Cobra Carbide runs 24/6 with the night shift all lights out. They utilize top of the line machines from Rollomatic and Walter. Four new machines are due to come on line around the new year, doubling production capabilities.

Cobra Carbide runs 24 hours a day six days a week and is adding four more machines to their already capable fleet. “We have Rollomatic Swiss grinding machines and German made Walters,” details manufacturing supervisor Ruben, “They are the Rolls Royce of our industry and we will have four more online next year. We stock 25,000 different catalog product numbers so advanced manufacturing practices go a long way. We run the night shift totally lights out.” An extensive inventory of standard tooling is just one aspect of Cobra Carbide. They like to think they shine when it comes to “specials.” “Specials are customized tooling manufactured to meet a customer’s specific requirement,” explains Rakesh. “Most companies utilize standard endmills, drills and inserts, but we have the ability to custom make anything they need in a very quick timeframe. Specialized tooling companies are mainly situated in the Midwest and east. We are one of only a few based on the West Coast. Aerospace companies have no time to wait on quality tooling. Being local they don’t have to.” The idea is to have local tool manufacturing to support local companies. With design, engineering, manufacturing and coating all local it allows Cobra Carbide to make quality tooling, in a fast manner, to service an industry that needed it yesterday.

Forty percent of Cobra Carbide’s business is exporting tooling to other countries. Countries like Mexico, Brazil, Argentina and Peru love made in America tooling. Mexico alone has 70 Cobra Carbide distributors. “We have 600 distributors in the US,” tells strategic accounts manager David Goodman. “Our US market share continues to grow but we are exporting a large portion of our production to countries that don’t have quality tooling readily available locally to them. Made in America has value everywhere, our distributors want it, and our customers want it.”

Rakesh’s immediate plan for Cobra Carbide is to grow sales though increased manufacturing capabilities, upgraded software and offering a quick turnaround on specialized tooling. “We have a huge amount of inventory of standard tooling,” clarifies Rakesh. “But you can’t effectively manufacture specialized tooling from India. The local aerospace companies need it sooner rather than later. With our west coast manufacturing we can get it to them sooner.” Ten minutes with Rakesh and you can see the pride he has in his company and their products. “I have employees that have been with me since the very beginning,” concludes Rakesh. “We love what we do and I’m proud of the fact that we brought our manufacturing back to America. This is my home and the tooling industry has been a fun journey. People say to me Rakesh you never look stressed. That’s because there are bigger challenges in life. Business shouldn’t be one of them.”