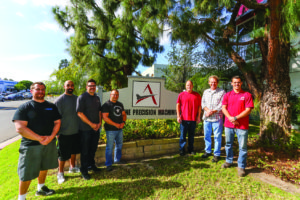 Aerodyne Precision Machining Inc. (APM) incorporated thirty years ago in Southern California’s Surf City, Huntington Beach, California. What started out as a home based company in Raymond Krispel’s garage has grown into a 20,000 sq.ft. manufacturing facility with 32 employees and well over a dozen CNC milling and turning centers.

“My dad Raymond and my uncle started the company back in the mid 80’s,” explains APM’s general manager Jason Krispel. “Raymond knew someone working at Parker Hannifin and called him up right after they opened. Thirty years later Parker Hannifin is still our largest customer and we support efforts from three different divisions.” Raymond has over 40 years machining experience, primarily in the aerospace industry. Over the years APM has built their reputation as a go to supplier for their work in high-pressure hydraulic systems, electro-hydraulic servo-valves, cylinders, and hog outs. “We’ve always been aerospace hydraulics oriented because that is what our customer needed,” tells Raymond. “Transfer tubes came fifteen years after the company started, and that was our first big break. Things really took off after that.” Transfer tubes are part of the mechanism that controls the flaps on a plane. As an example each 737 requires 8 of them plus spares. When you factor in the number of planes brought on line every month APM has a lot of tubes to manufacture, so no wonder they are so good at it.

Eric Kaufman and Ben Hanson head up APM’s milling department. Together with Jason they do all the programming, setup, and fixturing for their eleven 3, 4 and 5 axis Hurco milling centers. All three are young guys, Eric 34, Ben 37 and Jason 28. Ben graduated from NTMA training center with outside training in Solidworks 3d modeling and part programming, Eric has a degree in machine technology from Orange Coast College and Jason is a recent graduate from the University of Connecticut’s hockey team and mechanical engineering school. Two minutes with these guys and you quickly realize that APM is a great place to work, and that these three are Hurco enthusiasts. “Milling is my thing,” jokes Eric. “Ever since taking a machining class in high school I knew I wanted to work in this industry and to machine things out of metal. I had a knack for milling and working here at APM has helped foster my abilities.” Eric has been with APM for over eleven years and co -manager Ben has been part of the family for more than seven. Their fleet of Hurco milling centers range in age and axis from a 1986 running DOS on the controls to a brand new 5 axis VMX30U machine.

APM is one of the larger Hurco shops in Southern California, and just made the jump to 5 axis machining three years ago. “We’ve been dealing with Machinery Sales for a couple years,” explains Eric.  “Garry Frost, his sales staff and service team do a great job supporting the Hurco product line, but it took us a while to finally pull the trigger on our first 5 axis.” After seeing it run at an open house, APM ordered a Hurco VMX42U. It is a 24hp machine with 40 tools and Hurco’s integrated trunnion table. “Combined setup and training was less than two weeks,” adds Ben. “We were cutting chips on actual jobs before the training crew even left.” APM discovered that the 5 axis not only changed the way they machined parts, but also how they looked at jobs. “We are taking a part that used to have 8 operations and now only two at most,” explains Eric. “Besides the time savings we have seen a huge bump in overall accuracy. For example we have a job that requires doing a deep drilled hole at a complex compound angle. The hole is 3/16th in diameter and over 8” long. The position on the part is relative to other features. Taking it on and off for multiple operations always left us on the higher end of the tolerances. With the new 5 axis machines we are spot on every time.” APM liked the first machine so much they also added two VMX30U’s to their line up. The two new machines have the same horsepower as the first, but just have a slightly smaller table. “We think differently now as programmers,” explains Eric. “Before, Ben or I would look at a part and think machine, flip, machine, flip and so forth. Now it is as simple as put it on the 5 axis.”

All of the milling department programmers love the Hurco controls and find them to be one of the biggest selling points of the machines. “The Hurco machines in general are very user friendly, especially the controls,” describes Eric. “The controls are intuitive and easy to use. Walk up to it and you see Windows. It is recognizable to all the young people getting into the industry. Hurco’s Max 5 control has amazing multi-tasking features.” Ben agrees with Eric on ease of use and adds his own thoughts on usability. “Over seven years ago I came to Aerodyne and had never run a Hurco. Thanks in part to Eric, I picked it up pretty easy and now it is my preferred system. Hurco’s conversational comes in handy. Being able to program right on the machine is convenient. I don’t have to come all the way back to the programming command center just to make a small change. Simple stuff is made simpler by being able to do it on the machine.” Eric feels there is an unfounded fear of different controls in the industry. “I think a lot of people are scared to try something different,” describes Eric. “Hurco controls are my forte, and I’ve taught everyone in the shop how to use them. Within a week or two at the most they are pro level users. It doesn’t make any sense to my why some operators are so resistant to change, especially when it makes their jobs easier.”

By adding the 5 axis Hurco machines into the mix APM saw a tremendous gain in accuracy and productivity. Their goal moving forward is to continue down a technology driven path. “I worked part time here in high school and summers during college,” describes Jason. “I’ve been full time now three years and see a big change in this company and how we go about producing parts. The 5 axis machines set in motion a technology trend that we hope to continue for the next few years.” Jason has spent his short time at APM roaming around the shop learning the different aspects of the company. His title is operations manager, but right now he is in procurement, scheduling, and customer service. “Jason is truly a jack of all trades,” describes Eric. “He takes on everything for the challenge. He can program, setup, and run our mills and lathes, he worked in quality, programming the Mitutoyo CMMs and now he is in the front office.” Jason predicts lights out manufacturing and robotic automation will yield APM another big bump in capabilities. “Optimizing the machines and how we go about machining the parts is a key focus point for us moving forward,” explains Jason. “The next step will be lights out manufacturing with the goal of having two full shifts with palletized systems.” Eric chimes in with “and robotic automation.” “Yes and robots, Eric wants to play with robotics, and we want to challenge the guys on the shop floor with new and exciting parts to manufacture.” When the robots do come you can bet that Jason will be in the crease right next to Eric and Ben.

To their customers, Aerodyne Precision Machining’s 30-year reputation is built on high quality parts, on-time delivery, and excellent customer service. Even without robots this family business offers employees open lines of communication, room to grow and a tight knit team atmosphere that makes coming to work fun and exciting.