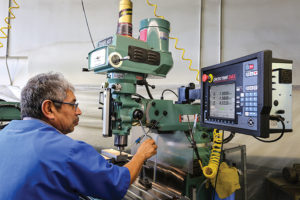 Daniel Valencia has been with Adapt Automation since 1975. He trained Tim on the manual machines when he was in his teens. Danny was the first operator to get the new ProtoTRAK SMX mill and went through the training with Southwestern Industries. As Adapt purchased more and more machines he trained the others.
He was surprised by how much easier and faster it was to do his job with the new machines.

“It’s a funny thing,” describes Tim Van Mechelen, president of Adapt Automation Inc. “Forty years we made advanced automation systems for factories all over the world using only manual machines. Then Patrick Fitzsimmons at Southwestern Industries convinced us to try one of their ProtoTRAK SMX mills and we were hooked.”

Since 1971 Adapt Automation Inc. has been a family run business in Santa Ana, California. Originally started by Tim’s father Case Van Mechelen and a few of his buddies, Adapt has always been in the automation game. “Dad is 79 now and still involved in the business,” tells Tim. “He is the last of the original owners and is here every day doing his thing.” With 50,000sq.ft. and 50 plus employees Adapt Automation is still in short supply of floor space. “We do all our own wiring, plumbing, manufacturing, electrical and design. Every single piece is done by hand because we are making one or two of something. Because of that we are limited in how much space each area can utilize in the shop. How we use what we have is very important.”

Adapt Automation builds fully customized one off factory automation machinery for the automotive, medical, aerospace, electronics, and the food service industries. “We do it all,” continues Tim. “We service a niche market where someone is doing something manually and he wants an automated machine to do it instead. Our end products can be anything from screwing something into something else to advanced electronic micro welding complete with vision inspection and testing. It can be fast, it can be slow, and it can be small or large. It all depends, and is never the same.” Every job is custom, and ranges in price from cheap to millions depending on the scope of the work. Adapt’s products are shipped all over the world with automation jobs in progress going to China, Mexico and throughout the U.S. Adapt learned long ago that to be able to manufacture in California and remain competitive that they needed to be smart and be open to new ideas. Amazingly it took 40 years before they added their first CNC machine to the shop floor. Six years later they have six CNC mills and a new CNC lathe all from Southwestern Industries.

A half dozen Bridgeport manual mills were getting the job done for Adapt, but they were getting older by the day and in need of some TLC. CNC was never much of a thought because of the scope of their work, but Southwestern Industries had a machine that fit the bill perfectly. “We bought a ProtoTRAK SMX mill,” details Tim. “It is a single axis, single servo machine that is super cost effective and was easy to learn. We don’t have the need for a 20-axis machine that runs a lot of widgets.” They bought one, then another, then another and a few months ago added three more along with a TRAK TRL 1630SX lathe.

Adapt’s shop foreman was reluctant to change, but it only took that first machine to alter that opinion. Adapt’s machinists literally have decades of manual experience so they needed a machine that would translate that expertise easily into the new CNC workflow. “We put our best guy on it,” details Tim. “Patrick Fitzsimmons from Southwestern is the sales guy and the trainer, so he came in and spent half a day with Danny showing him how to use the controls. By the end of his 12 hour shift he liked it, he liked it a lot. You can run it in manual or CNC mode so it is super flexible, especially for those who have never run a CNC before. The learning curve was near nonexistent.” Transitioning to the new controls was virtually seamless thanks in part to ProtoTRAK’s advanced features in a simple to use interface. All the mills can run G-code, and CAM, but they really shine utilizing the ProtoTRAK conversational language. The powerful control allows the operator to create difficult geometry without the need of going to a computer. Plug in the data and it will do the math for you without any guesswork. “The ProtoTRAK controls almost speak English,” details Danny. “If you can read a blueprint then it is simple to learn and use. I was surprised how quickly I could do my job. It is a lot easier and faster for me to make the parts we need.”

Once the first machine was on the floor and running everyone wanted one. Danny had the training from Southwestern Industries and passed his knowledge down to the others as necessary. “We had no complaints from anyone getting a new machine,” explains Tim. “None of my guys are what you might call young, but no one fought us on the change. All of them were excited. So much so we kept buying them so all our guys had their own ProtoTRAK SMX mills.” Tim expressed how much happier the team is now, and how productivity has increased through job satisfaction. “The fact that they have improved quality and production is just icing on the cake.”

Like Southwestern Industries, Adapt Automation is a com­pany that serves a niche market. Their products are designed to go from “napkin design” to “finished product” in the shortest time frame. Even though prototyping is not what Adapt Auto­mation does, the same “one and done” principles often apply. “We don’t build parts for aircraft,” explains Tim. “We build machines that make parts that could go in an aircraft. So, our requirements are a little different. Patrick understood that when pitching the idea of the ProtoTRAK SMX mill to us.” Adapt Automation works mostly in hardened steels, and doesn’t mass produce anything. So, speed isn’t the “end all be all” for production but it doesn’t hurt to have it. “Accuracy and repeatability are necessary to us,” continues Tim. “But we are not judged in the same way a job shop might be. We have a spec and we run to it but no one is auditing us and counting the widgets being dropped per hour.” 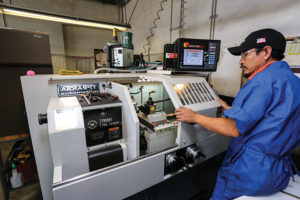 Adapt Automation added 3 new ProtoTRAK mills and this TRAK lathe in their last order. The guys in the shop were so impressed by the mills that they lobbied
Tim to get them a new lathe too. The TRAK TRL 1630SX lathe is a 2 axis machine with a 2500 RPM spindle and an 8” chuck. For the work Adapt does
this new machine speeds up the processes like cutting threads and on multiple sided features. Like all their machines from Southwestern
Industries they were impressed by how easy it was to learn and start cutting parts.

As a company building one off manufacturing solutions Adapt Automation tries to source as much as they can utilizing readily available stock parts like nuts and bolts. “We try and buy off the rack as much as we can,” describes Tim. “Anything we can buy pre-made helps the bottom line.” One third of the parts on any given automation product are available to buy off the shelf. One third Adapt’s manufacturing team   makes, and the last third of the equation is assembly and making it work. “Every custom part or assembly used on our machines was manufactured using the ProtoTRAK SMX mill or the TRAK TRL 1630SX lathe. If we need 100 of something or a specialized EDM part we send it out, but other than that we manufacture everything else we need. Since adding CNC to the shop we send fewer parts out than we did before.”

Adapt Automation’s relationship with Southwestern Industries is more than just machines, it is about service and the confidence in knowing support is just a call away. “Southwestern Industries has been really helpful all the way through the processes of buying and running the machine tools,” details Tim. “Everyone delivers service when they are selling you something, but the true test is when something goes wrong. Thankfully the machines are really reliable, but I can’t say enough about the service when we need it. Proof is in the pudding and that is why we have seven of them.” In the 6 years since Adapt Automation began adding ProtoTRAK mills to their work flow they have lost only one day on one machine. A servo motor went bad and Southwestern was out the next day and had it fixed. “I like how they are local,” details Tim. “They are right down the road from us and stock everything we might need. The ProtoTRAK SMX mills have spindles and iron made overseas, but all the controls, wiring and brackets are assembled and manufactured right here in California. I like that I’m getting that kind of quality for a small investment. The value is there with all the Southwestern Industry machines we own. You get way more out of the machines than the price you pay. It is like setting your car on cruise control compared to using the manual machines.” Since Adapt Automation are not a production based job shop it is difficult to quantify the improvement, but management has noticed how output is noticeably better, moral is better, and they love having a shop filled with new looking machines. “We got a great deal on this last purchase of four machines, but really every machine has been a bargain. The guys love them and we love them.”

Adapt Automation’s niche is truly custom automation. They are selling a service that includes design it, build it, and install it on the factory floor. “One of the biggest reasons we can do what we is that we have found a way to make useful very useful, and do away with anything that isn’t useful,” concludes Tim.  “It is our own style of lean manufacturing. If you are not smart, then you are not competitive in price. We realized a long time ago that treating our employees well pays dividends. Case is very loyal to them and they do anything we need because of that. We have guys that have been with us for 40 plus years, twenty years, ten years. They are our most valuable assets and we are happy to give them great tools to build the machines that are building the world.”