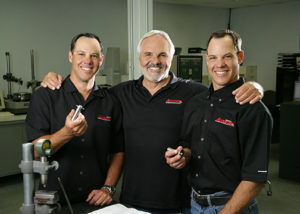 Dave, Jack and Doug Nilsen of Accurate Grinding and Manufacturing in Corona, Ca.

David and Doug Nilsen grew up on the shop floor of Accurate Grinding and Manufacturing (AGM). Literally, the twins went to work with their grandfather at three years old. Now, forty something years later they are still on the shop floor tackling everything from aerospace to fishing reels.

“Our grandfather, Mike DeMarco started Accurate Grinding in 1950 out of a 5,000sq.ft. shop in East Los Angeles,” tells Doug. “Precision grinding was his specialty, and he figured out how to make a high precision turbine shaft back in the 50’s. He got hooked up with the guys at Garret making parts for the first jet engine.” At the time few people could grind with his kind of accuracy, and decades later they were still known as the go-to shop for precision shaft grinding. With a little outside encouragement Mike added full production capabilities. Eventually he stepped up to complete shaft manufacturing. He took bar stock and turned it, milled it, heat treated and plated it. Sixty-six years later that formula is still working.

“Our dad, Jack Nilsen took a short term job with our grandfather, (his father in- law) and uncle Joe (our mom’s brother) in the early 70’s,” explains David. “After graduating from Cal State LA with a degree in drafting he went to work for McDonell Douglas. The office he was working in moved so he picked up hours at Accurate. That interim job became a life long journey, and Accurate would not be the company it is today without his vision.”

Even though Mike and Joe’s idea of a shop was 20 guys running turret lathes and making manual parts, Accurate got their first CNC in 1978. “Our dad pushed hard for the Nakamura,” describes David. “As CNC started to get into the mix our dad was quick to see the value in it. He knew it was a transitional time for machining and you had to be in or out. We were in.” David and Doug got more involved in the business during high school, working after school and on weekends. They went off to college, but came back for the summer in 1989. That summer helped shape the future of Accurate Grinding and Manufacturing. It transformed how people fished, and put Doug and Dave on a new course, leaving the old ways of manufacturing in their wake.

For 66 years AGM has turned simple bar stock into everything from rocket parts to fishing reels.

Fishing was always a family activity and that summer the boys were doing a lot with their dad. “We were out shark fishing on a six pack charter called Bongos and noticed they kept bending gaffs,” tells Doug. “My Dad thought we could make a better gaff using what we knew from the aerospace business. We went to the shop and came back a few weeks later with a far superior product.” We hand built 180 gaffs and sold out that spring at a Fred Hall Fishing show in Long Beach. In March of 1990 Accurate Fishing was born. “We were young and learned a lot about doing business, but our big break came when we designed and manufactured our own upgrade kits for Penn Jig Master fishing reels. Sales of the upgrade kit in one month generated more money than the gaff business did in two years.” Their design improved on an already solid fishing platform, but more importantly led them into inventing their own reel. The reel they designed and patented is a TwinDrag, dual brake setup that some feel not only sets the standard for reels, but also created an entirely new market of products.

All along aerospace has been a big part of the fishing business. Doug and Dave took what they knew from aerospace to make the reels, but in turn what was learned from manufacturing the reels helped elevate their aerospace program. They were forced to compartmentalize and think about how to process parts faster and better. “The way we handled aerospace parts was more traditional and old school,” explains David. “The fishing reels showed us we needed to modernize how we do things. For all our aerospace customers combined we have around 200 part numbers total, but each of our reels has 150 parts and we have 30 different reels. We built our own data base system with Filemaker Pro and implemented that back into how we treat our aerospace products.” Quality control for Honeywell and all the AS and ISO verification requirements are all integrated into these database files. Accurate’s computer system is a homegrown masterpiece and not a stock off the shelf management system. It mimics how they do business and is treated as a living thing that is always evolving. Everything is accessible by them and their management teams right off their iPhones and in real time.

Turning, milling, CNC grinding, Swiss turning, gear cutting, splines, ID, OD and surface grinding, polishing, gun drilling, and commercial anodizing are all part of the Accurate package. They take a piece of solid bar stock and transform it into everything from rocket engine parts to fishing reels. “We specialize in aerospace parts that other shops don’t want to do, close tolerance, high risk, shafts and carriers,” describes Doug. “Our niche is round with holes and gun drilling. It’s not that other companies can’t necessarily do the work, it’s just that they find the parts too technical, with too many process and too many items to control. For us that’s normal, but others don’t find the challenge to their liking.” A typical part for the local rocket company might require 2 tenths all over tolerances, gun drilling, multiple heat treats, threading, grinding, plating, gears and thin dense chrome

Accurate is a second tier supplier to Boeing, and first tier to industry staples like Honeywell and SpaceX. Every one of SpaceX’s rockets has two or three Accurate Manufacturing parts in when they lift off. “We are proud to be a part of all our aerospace customer’s programs,” adds David. “We like making things that get shot into space. When we get on a plane we know we delivered the best parts possible and that’s important.” All Boeing two engine aircraft have what is called a Ram Air Turbine or RAT. Accurate machines a shaft for the RAT system. It is a complex part and Accurate Manufacturing is only one of three companies manufacturing them. The RAT is part of the safety system, and will power vital systems (flight controls, linked hydraulics and flight-critical instrumentation) in the event both primary and auxiliary power sources fail. “The pilot who dead sticked the plane into the Hudson River would not have been able to do so without the RAT. All the parts functioned perfectly and lives were saved, that’s important to all of us in the aerospace game.” The joke is that Accurate is full of rats, but in this case, three decades worth of RAT experience is a good thing.”

Uncle Joe retired in 1999, and total control over Accurate Grinding and Manufacturing was now in the hands of Jack and his sons. Soon after David and Doug started the hunt for a larger manufacturing facility. “We were over being in Boyle Heights with two small buildings,” tells Doug. “Dad went on a fishing trip in 2002 and we decided to pull the trigger on a 30,000sq.ft. building in Corona.” Jack came back from his trip to find a note on the door saying your office is 60 miles east of here. He knew they were planning a move, but had no idea it would all happen while he was gone. “We had been there since 1950 and there was a lot of stuff to move and throw out, but it was a great decision and one that allowed us to grow as a company.” Without space restrictions they were able to bring larger machines on board. “Moving forward the goal was to go larger and with more automation. Now one guy is out running 3 or 4 machines instead of one guy on one machine.” 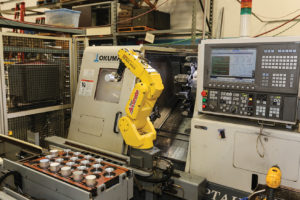 AGM has had robotics since 2008 when they purchased the Okuma Captain with Fanuc robot and conveyer system. More robotics and automation are in the works.

A quick look out at the shop and you will quickly see a trend. “We have three Tsugami SS26 Swiss screw machines, and a brand new DMG Mori NLX 2500-700, but most of our primary manufacturing machines are Okuma mills and lathes.” Four Okuma Crown turning centers, an Okuma LU-15 twin turret lathe, and the Okuma Captain with Fanuc robot and conveyer make up the turning department. Milling is done via a new Okuma Genos 560 vertical and two Okuma horizontals, a ten pallet Okuma MA-400 with 154 tools and a two pallet Okuma MB-4000 with 218 tools. They bought their first Okuma in 1998 and became instant fans. One machine quickly turned into five within a two year period. They’ve been very impressed with the Okuma build quality, the accuracy of the parts, and the controls.

“We love the Okuma controls,” praises David. “They’re intuitive, not overly complex, and deliver very high performance.” The newest control includes the THINC®-OSP control system allowing you to add third party apps like you would on your phone. “We just got the Genos M560 vertical with a P300 control and love it. The Genos machines are super quick thanks to the way the table and head move together, but the control includes features we find very useful, like multi -layers of touch screens, multi- tasking, and cut and paste right from Notepad.” The best machines are nothing without support/service. Doug and David are quick to commend the local Okuma distributor Gosiger on both. “We’ve worn out spindles and been back up and running only days later. We buy a lot of machines from Kevin Larson and Gosiger for a reason, they are fantastic when it comes to meeting our machining and service needs.”

Beginning last year, AGM began rebranding and setting their sights on increased aerospace work through reconnecting with customers and hiring a sales team. “Aerospace jobs have existed in this company since 1950 with zero to one sales guy,” explains Doug. “By hiring three new sales people in the last year we’ve already seen a return on our investment. The opportunity to do more for our existing customer base has always been there, it was just something we never went after.” Fishing and aerospace complement each other at AGM. Last year’s fishing season was the best California has ever had. Sales for 2016 are projected to see a 30% increase, so balancing sales in aerospace is key to their overall continued growth. Doug and Dave look at company sales like a staircase. When you take one step up with your right fishing foot, the left aerospace foot has to follow. Some times you lead with the left and sometimes the right, but they always have to be close for you to keep moving forward and not trip and fall. 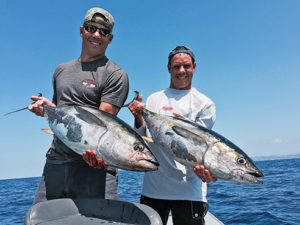 Doug and Dave used their aerospace manufacturing experience to invent the Accurate Fishing reel, a TwinDrag, dual brake setup that some feel not only sets the standard for reels, but also created an entirely new market of products.

It is hard to tell if Doug and Dave are Fishermen with a manufacturing problem, or machinists with a fishing addiction, but one thing is clear, they love what they do and it shows in their work. “We lucked out having a family business that gave us an outlet to create,” finishes the brothers Nilsen. “It would have been a lot harder to start a fishing business from nothing, but on the flip side the fishing has helped elevate everything we do in aerospace.”