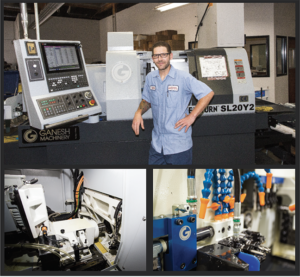 Nate’s great grandfather Raymond Beckerman opened Automatic Specialty Co in 1943 out of a gas station in Huntington Park, Ca. They still run some of the same parts from the 40’s and even service many of the same customers. “Companies like Zephyr Tool have been with us forever,” describes Nate. “Standard Abrasives was bought by 3M, but we manufacture shafts for their abrasive department the same as we did in the 50’s. Most of the parts we manufacture are pretty basic. For example, one of the 3M parts is a shaft they mold the flap wheels on to. It is a part that is perfect for all my Brown and Sharpe machines. +/- 10 all day, every day.”

Raymond’s son only worked a little on and off at the shop before becoming a butcher, but his grandson David Donaldson really took to the screw machine business. “My dad, David took over the day to day operations in the early 80’s,” tells Nate. “He loved the shop, the Brownies and was satisfied in how they manufactured. I worked on and off for him over the years and knew a little about machining. When he got sick I was working in aerospace as a Tig welder. That was nine years ago. I took over the day to day operations and tried to learn as much as I could, but he passed away only six months after I took over.” Nate found that most of his struggles had to do with the ownership side of things like accounting, vendors and customer management. The machining came easy, but that was only one part of being a business owner.

It was a few years after becoming Automatic Specialty’s president that Nate took stock of where he envisioned the company going. He began to dread winning bids with 6 or 8 operations because of the sheer time and effort required to run it. “The parts ran great on the Brownies,” tells Nate. “But I started to look at some of the parts as more a burden then anything else. I knew that I had to move forward with technology and automation so I could free up some time to run the business.” Nate’s dad was an old school machinist, content with how they ran parts. He never considered moving away from manual machines. He also hated computers. “My dad loved playing solitaire in his office,” jokes Nate. “That was literally the only thing he used a computer for. He was not a fan, but I wanted to see if CNC would benefit the shop.” 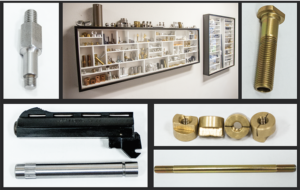 Automatic Speciality Co is family owned and operated screw machine shop, manufacturing specialty hardware; nuts, bolts, screws, and washers. For decades they’ve relied on the accuracy and reliability of their Brown & Sharpe single-spindle Ultramatic screw machines. After 75 years and millions and millions of parts they have purchased two new CNC Swiss style machining centers. All the parts requiring more than one op are now going on the new Ganesh SL20Y2 machines. Parts that were taking 5 or 8 ops are now being run in a single operation on the Ganesh, giving Nate finished parts right off the machine.

Nate began his search for CNC machine tools, ultimately buying a few older machines and learning to program by reading CNC Programming Handbook: A Comprehensive Guide to Practical CNC Programming by Peter Smid. His first CNC was a Hardinge retrofit with an analog controller. “I wasn’t sure what to expect so I bought it at auction for like $2000,” laughs Nate. “I figured if I was going to fail, then fail fast, and fail cheap. That was only 5 or 6 years ago. It was a great way to start, but old machines come with old machine problems. If there was an issue I didn’t know who to call for service on a 30-year-old piece of equipment. I wanted a new machine and just bit the bullet when I found one. Best decision I’ve made as president.”

Service and support were as big a part of the buying process as the capabilities of the machine. Nate did his research and decided to give Ganesh Machinery a call. They were located just down the street from his shop, and had a good reputation.

Automatic Specialty Co. provides personalized service to their customers, and Nate appreciates companies that do the same. “I prefer not to deal with huge corporations that treat you like a number,” describes Nate. “I’ve had a good experience with everyone I’ve come in contact with at Ganesh. From sales and service to tech, everyone has treated me like we’ve done business together for decades. Ganesh worked with me right from the beginning. It wasn’t a matter of show me the cash and we can talk about the machine, they understood where I was as a company and where I wanted to go, then offered up expert opinions. First time buyer looking for only one machine their sales rep came in, saw my shop, and was open and honest. We talked it over for two months before I pulled the trigger on a Ganesh SL20Y2 Swiss style screw machine. It is basically two 4 axis lathes. Cross milling, drilling, live tooling everywhere, it is awesome.”

Nate ordered the Ganesh SL20Y2 specifically to service a couple of jobs he already had in house. One example is a gun barrel. It is a 4” barrel for a .22 caliber pistol. They’ve made them for years and produce up to 40,000 annually. Before getting the Ganesh Nate would rough form and part it off on the Brown & Sharpe, then centerless grind it, then gun drill it, then it needed a groove on the back, a 5 degree taper and finally knurl it. The part would sit and sit just waiting for the next operation. The Ganesh does all of that in one pass. “It was a big investment for me,” explains Nate. “The machine is overkill for what I originally purchased it for. I wanted it to be future proof and offer the ability to manufacture more complex parts. Funny enough I got the second machine because customers learned I had a new machine and started having me quote more work.” He received a 150,000 annual part order from a customer out of the blue because they knew he bought a new machine. “I had to buy a second Ganesh just to keep up. I’ve got so many new parts in that I’m short on time to run the parts I originally purchased the machine to run.” The second Ganesh is an identical SL20Y2. It has the exact same everything, same bar feeder, same controller, same tooling. Nate can run any part on either machine without making program edits. It simplifies things for him, plus he was so happy with the first one there was no point changing anything on the second machine.

Until recently Automatic Specialty Co. was an all manual shop. (left) Employees hand knurl hundreds of gun barrels a day. (Right) The ”Brownies” served the company well for many years, and continue to run the simple parts requiring only one operation.

Talking with Nate he is probably most impressed by his newfound ability to produce complete parts in one operation. Even the most basic of parts has become so much faster and easier. Automatic Specialty Co. runs hundreds of thousands of a simple brass lock nut. It was five ops before and literally took them weeks if not months to complete an order while waiting on machines and changing setups. It was the first part he ran on the new Ganesh. “I set up the brass nut before I left on Thursday,” touts Nate. “Sunday morning it was done, all unattended. We cut a month of production down to one extended weekend. I’ve always liked long runs, but now I adore them even more because it is being done lights out.” Nate has moved all his multi op parts from the Brownies over to the two Ganesh SL20Y2 machining centers. If it is a super easy one op part it stays on the Brown & Sharpe…..for now. “My goal is the have three or four of the Ganesh Swiss machines running 24/7 with the least amount of human interaction possible. The Brownies served this company well for so many years that I might have one chromed as a display, but I can’t say enough how much I love my Ganesh Swiss screw machines. They are a perfect fit for what we do. I wish I had pulled the trigger sooner rather than later on that first SL20Y2.”