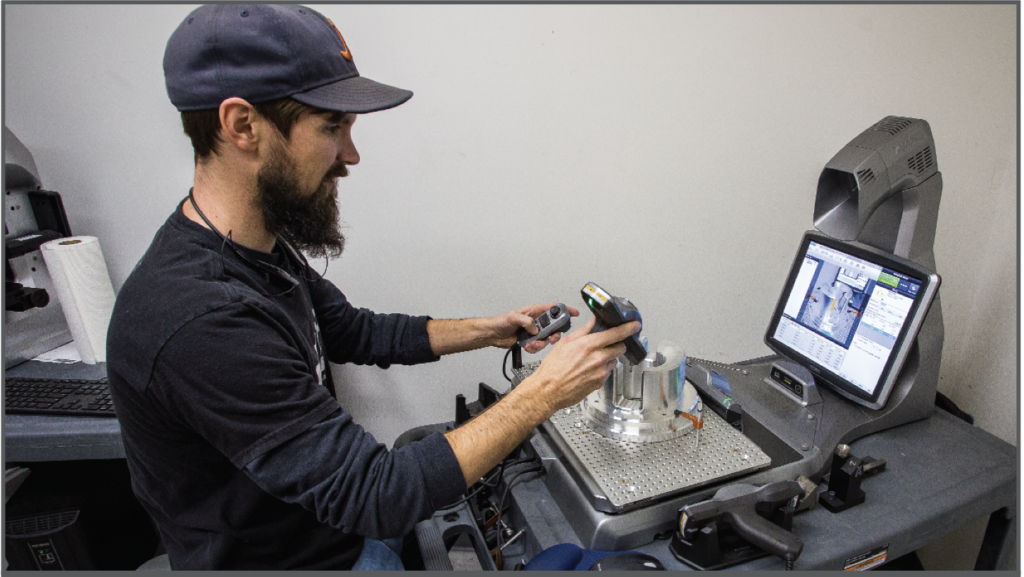 Jon Duckett handles QC for M&M Machine. He utilizes the Keyence XM1200 handheld CMM to measure one of the many aerospace parts they produce.

Jon Duckett is laying the foundation to become the 3rd generation of owner at M&M Machine in Auburn, Ca. Since 1972, M&M has been a job shop serving niche markets within northern California. The company was founded by Richard Mitchell in his Mountain View, Ca. garage. His daughter Janis and her husband Chris Duckett took ownership in 1980. Their son Jon has lofty goals and ambitions as the company nears its 50th anniversary.

Jon’s punishment for being suspended in high school was having to work on the M&M’s old machines in the back of the shop. It was a fitting chastisement that most family-owned operations dole out to their misbehaving children when given the opportunity. Through the years it became less of a penalty and more of a way to earn a few bucks while attending classes to become an accountant. At the time of Jon’s college graduation, Chris was gearing up for retirement and setting in motion plans to eventually sell the business. Business was good, but technology was at a standstill. With retirement on the horizon, investing in new machines wasn’t in the cards. “It’s funny that what used to be punishment is now what I love,” explains Jon Duckett, Operations Manager and future owner of M&M Machine. “I graduated college in 2014 with a degree in accounting but decided being close to family was more important than traveling all over with the large firm that had hired me. It was a difficult decision, but not really if that makes sense. I love the math and numbers that goes along with accounting, but I get the same satisfaction out of CNC manufacturing. I worked my way through college taking classes 3 days a week and working at M&M 3 days a week, so I already knew the ins and outs of the operation. I called my dad and asked if he would be interested in selling me the business and staying on for as long as he wants to help with the transition. This business is my dad’s baby. His experience is more valuable than anything money can buy. Even when he officially retires, I still expect him to be here all the time. Family businesses can be hard, and we are so fortunate that isn’t the case with us. Spending more time together is the goal. There is no tension, no animosity, we all really love working together.”

The Haas UMC750ss was purchased 2 years ago and has transformed how M&M Machine processes jobs. The 5-axis machining center has impressive specs for its price point and exceeds expectations. Jon feeds the machine a nonstop diet of 5 axis aerospace parts.

The opportunity to continue the family legacy was great, but to set M&M up for another generation of success they needed a different mentality. “To grow the business, we needed to invest in newer technology,” tells Jon. “We started the processes of finding a machine tool that could take us into the future. Once we embraced dropping the 3-axis mindset everything became clearer. We knew Swiss screw machines, multi-turret/multi spindle lathes, live tooling, and 5 axis milling is where we needed to go. Before investing in new CNC machines, we invested a ton of money into our inspection lab. We knew more complicated machining required better equipment to verify the processes.”

M&M Machine purchased a Keyence IM-7030 instant measurement optical comparator and a Keyence XM-1200 handheld probe CMM. Jon admittedly wasn’t great at finding true positions measuring by hand, but the Keyence XM-1200 has made that much easier. “We had a couple companies come in and do a demo,” tells Jon. “We wanted something quick, easy, and accurate, the XM1200 fit the bill. Pick it up, do a few clicks and it is ready to go. Ours has 3 different light sources and as long as the lights can see the camera it knows where the probe tip is. On the handheld unit there are green and red lights letting you know if everything is aligned and fully operational. You can swivel the table around and it will swivel the part knowing where everything is in relation.” Jon, who handles the QC for M&M, wanted a solution that didn’t take up a lot space and that was mobile. The optical comparator gets used on the shop floor all the time, but he also sought the ability to check 100% of the parts coming directly off the machine if need be. “The accuracy is amazing on such a clever device,” details Jon. “I trust it to a tenth all day, every day, and theoretically it’s good down to a micron. Since it is a handheld device there is a little more room for user error, but it is fast, so it is not hard to take 3 measurements if I really need to be sure.” 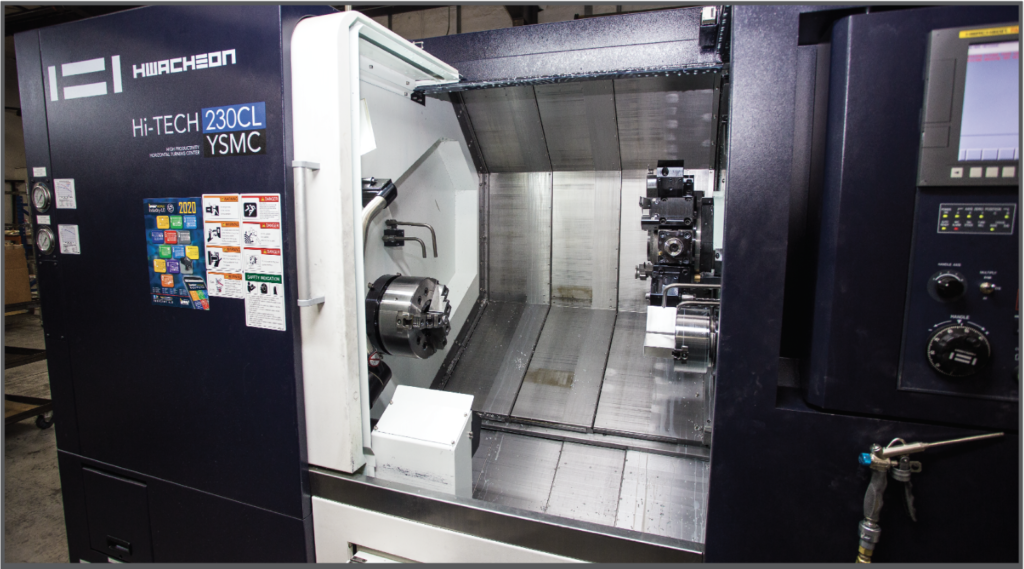 The Hwacheon Hi-Tech-Tech 230CL is a live tooling lathe with a 10” chuck, sub spindle, 24 tools and Y axis, everything M&M wanted in a turning center.

Three years ago, M&M had a shop full of 3 axis Haas mills, traditional Haas lathes, and their Miyano Citizen Swiss screw machines. Plans were set in motion to “just go big” and enter the world of 5 axis machining. As lifelong Haas supporters, Selway Tool was one of the first calls. “We’ve championed the Haas brand for many years,” tells Jon. “We like the support and service we get from Selway, and love that everyone knows how to run them. They do a great job for us, and their 5- axis is priced well enough that we can invest in the technology to see how the company evolves without breaking the bank.” M&M purchased the Haas UMC750ss two years ago and have been more than impressed. The midsized machine has a 20” platter, 1200 I.P.M. rapids, 15,000 RPM Spindle, X=30 in., Y=20 in., Z=20 in., and a 40-tool changer. “The UMC750ss outdoes everything we had hoped it would do,” touts Jon. “The aerospace part on it right now is similar to ones we’ve done before. Our programmer/operator really pushes himself to keep improving processes to make better parts faster. Honestly, we struggled in the beginning to achieve true 5 axis simultaneous machining. We went back to Haas, and to Gibbs, looked everywhere for a solution. Once we got the answer, everything opened up for us. We do so much more with it today than we did even 6 months ago. Our success with the UMC has been so great that we are only investing in higher complexity machine tools right now.”

Since purchasing the UMC750ss, M&M has added a 5th axis trunnion to one of their new VF3 machines and acquired a new 4 axis HRT210 rotary. They’ve also expanded with a second Miyano Citizen BNA-42MSY dual spindle Swiss turning center and a Hwacheon High-Tech 230CL, both with dual spindles and live tooling. “We sat down and looked at what we had capability wise and what we were missing,” explains Jon. “We have 3 axis and 5 axis so a dedicated 4 axis machine seemed logical. Combine that with the 5th axis trunnion and 70% of the parts we run on the UMC can also be run on one of those two machines. Only the larger and more complex parts need to be run on the UMC. We’ve been able to take on a lot more 5 axis work because of it.” 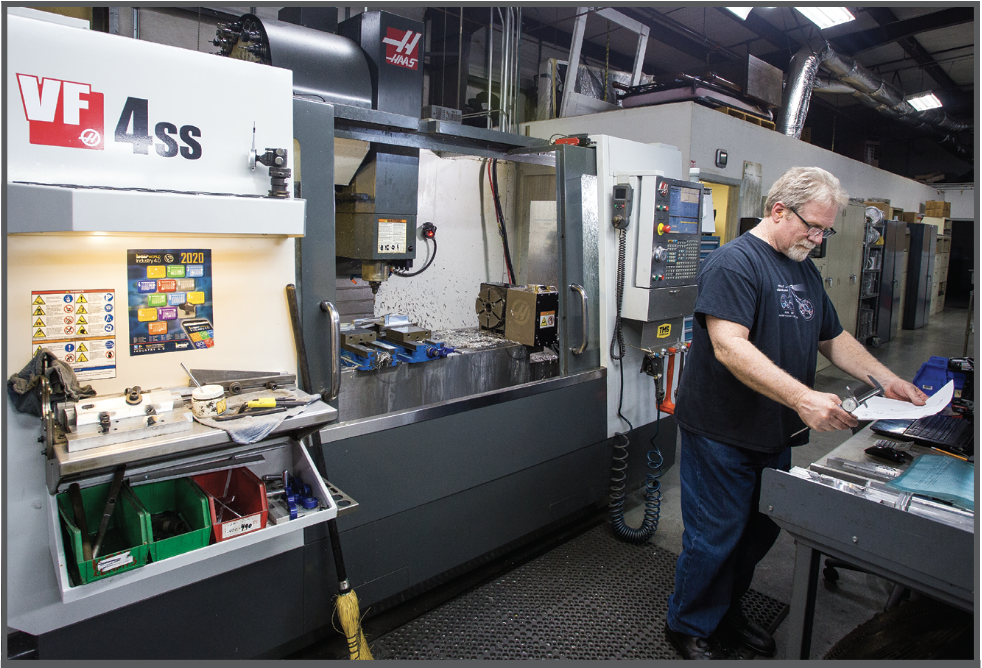 Mill foreman Jeff Parker has been with M&M for 27 years. The 4 axis
Haas HRT210 Rotary is one of M&M’s newest additions.

The 5 axis is also directly responsible for M&M’s latest lathe as well. Already familiar with complex turning work from their Swiss experience, M&M knew the time to foray into a larger live tooling lathe was a top priority. “We purchased a Hwacheon Hi-Tech 230CL from Selway and honestly we are nowhere near reaching the potential of that machine,” tells Jon. “It has a 10” chuck, good horsepower, sub- spindle, Y axis, 24 tools and everything you could ask for, but we are sneaking up on setting it loose. Slowly we are reprogramming jobs to match the capabilities it has on offer, but not as much as we should. We need to dedicate more time to learning what is possible on it. We figured two of our guys could tag team learning it, but our lathe foreman who is managing 6 other lathes, and the 5-axis guy is inundated with 5 axis work. It’s great that we are so busy, but not ideal to learn a new machine. I have no doubt that it will be cranking out insane parts soon, but it will take us a little time to gain comfort in running it to the level it is designed for.” 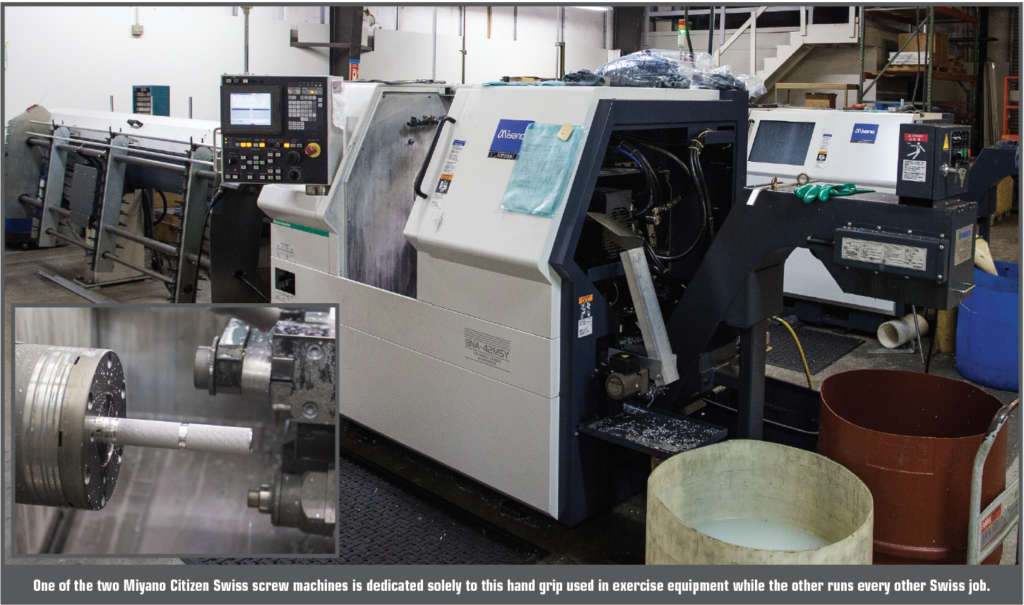 “The future is 5- axis for us,” concludes Jon. “Going forward we will continue to increase our 5 axis capabilities. We will undoubtedly buy another UMC, and after that get a larger Japanese 5 axis for longer production runs. We bill ourselves as a high-tech job shop that runs everything from exercise equipment to aerospace. Other shops of similar size in the area don’t have near the capabilities we do and we like it like that.”

Jon’s parents met at a grocery store and fate had it that they shared the same birthday. He’s an extension of their destiny and carrying on the M&M Machine legacy is something you can tell is very important to him. Maybe his kids will want to do the same someday. He might even use working on the machines as a punishment when they get older. It worked out pretty well for him. 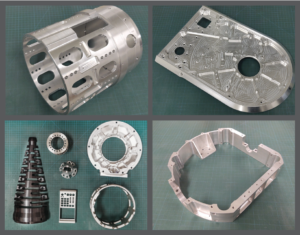 Parts range in material, size and complexity. As a job shop with 3, 4, and 5 axis milling, Swiss screw machines, and mill turn they can manufacture pretty much anything.